Dalí and the Jews 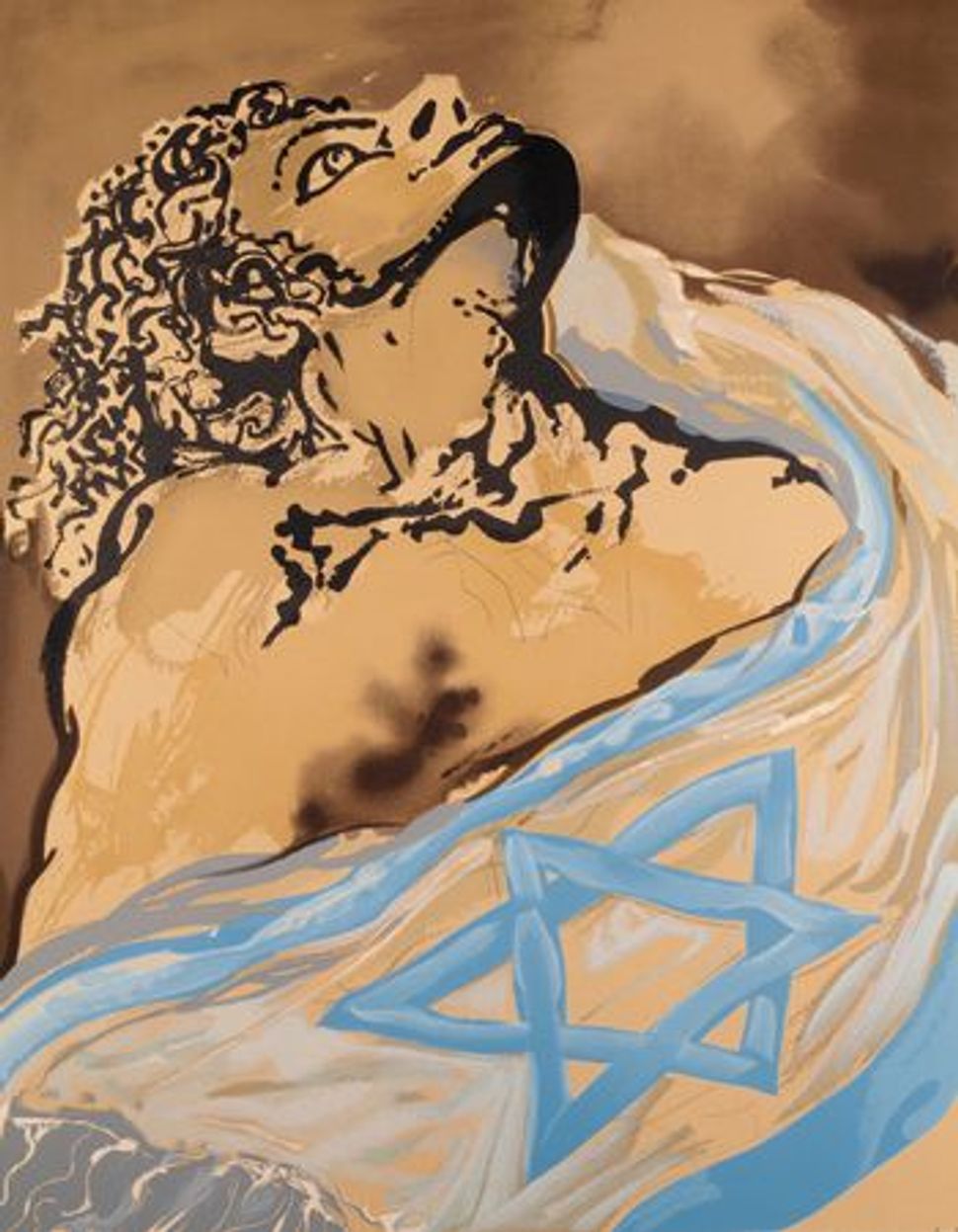 New Jew: Dalí?s ?Aliyah? showed Israel in a positive light, but the painter was also a fan of Hitler and Franco. Image by Fudacío Gala-Salvador Dalí

At the thought of Salvador Dalí, many people envision the artist’s famously eccentric face — his wide, cartoonish eyes and the wiry mustache that seemed to defy gravity. Or perhaps his best-known canvas springs to mind, that all-too-familiar scene of watches melting in a barren landscape. According to a rising crop of scholars, however, there is more to Dalí than his outlandish personality and surrealism. These people wonder about the post-World War II Dalí — Dalí who wrote a manifesto on “nuclear mysticism”; Dalí the Catholic, the optical illusionist and, perhaps most surprisingly, the creator of Jewish art.

An exhibition last fall at Atlanta’s High Museum of Art tackled some of these questions. Organized by art historian Elliott H. King, “Dalí: The Late Work” celebrated the artist’s lesser-known, post-1940 output of paintings, films and sculptures, including works that hadn’t been seen in the United States for more than 50 years. Lauding King’s achievement, New York Times art critic Roberta Smith wrote that the show “lays waste to the presumption that late Dalí is bad Dalí, and that most Dalí is late.” 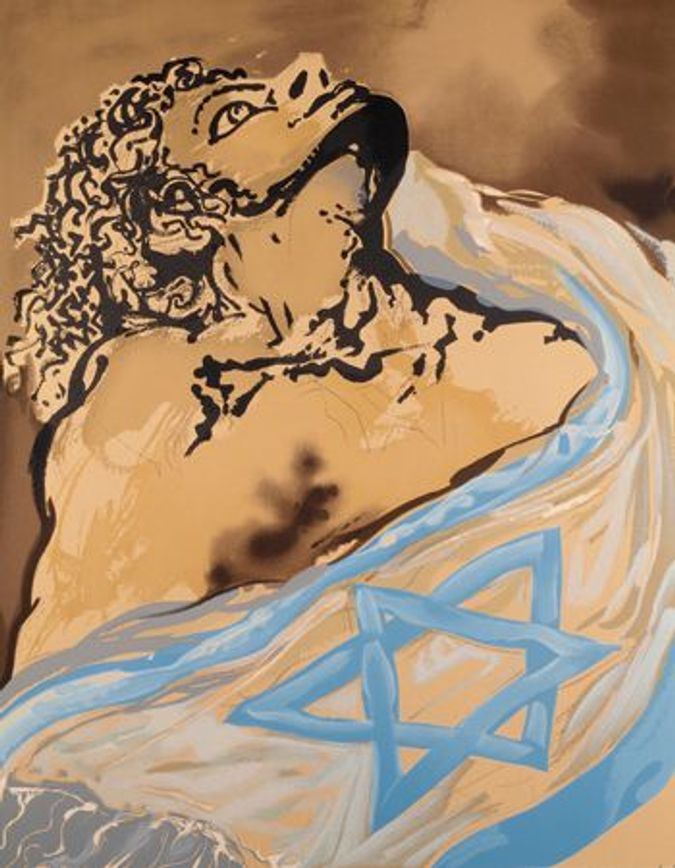 New Jew: Dalí?s ?Aliyah? showed Israel in a positive light, but the painter was also a fan of Hitler and Franco. Image by Fudacío Gala-Salvador Dalí

Now, another, albeit much smaller, exhibition in Atlanta is carrying forward the momentum: “Aliyah, the Rebirth of Israel,” which is on view at Emory University’s Marcus Hillel Center through the end of June, presents a suite of 25 lithographs from mixed-media paintings made by Dalí in 1967 and ’68. Commissioned by Shorewood Publishers for the 20th anniversary of the founding of the State of Israel, the series is a colorful and evocative Zionist history. Shorewood displayed the original paintings at the Huntington Hartford Museum, in New York City, and then sold them; their current whereabouts are unknown.

Fortunately, the publisher also made 250 sets of prints of the highly expressionistic artworks, and David Blumenthal, a professor of Judaic studies at Emory, owns one of them. His wife, Ursula, bought it for him nearly 30 years ago in remembrance of their first date, when David had taken her to see “Aliyah” at the Huntington Hartford. It was Ursula’s idea, too, to show the prints at Emory’s new Hillel building on the heels of the exhibition at the High. David acted as curator.

Assuming that role, he decided to organize the series thematically rather than according to its original numbering. Blumenthal speculates that after Shorewood received the final prints from the lithograph houses where they were made, the publisher simply lumped them all together. “As near as I can tell,” he said, “there was no order.”

To rectify this, he grouped the works — with the exception of the first and final prints — into four categories: “Exile and Hope,” “The Yishuv” (the pre–Israel Jewish settlement), “Shoah” and “Independence.” The first category includes a haunting image of a dark, nearly abstract, kneeling figure — the matriarch Rachel. Broad passages of muted color sweep around her, and a delicately rendered young girl lays her head beside the woman. A print from the last group features a white figure stretching its arms against a background of spiraling violet-and-blue streaks. The first measure of “Hatikvah,” the Israeli national anthem, sprawls above her head and across the page.

For the project, Blumenthal also delved into the world of Dalí scholarship, which had vehemently dismissed the many print suites the artist made as commissions starting in the 1960s. “Though ever popular with collectors and the public at large, critics and scholars have widely judged these graphics as predominantly commercial ventures with little artistic interest or merit,” King notes on the Web page for the Hillel exhibition. Though Blumenthal could hardly hope to reclaim the artist’s entire printed output, he undertook considerable research about “Aliyah” in an attempt to understand both the images themselves and the relationship — Dalí’s to Judaism — out of which they grew.

He tested a number of proposed theories: Did Dalí secretly have Jewish ancestors? Did his wife, Gala? Did the artist feel some kind of empathy for the Jewish people? Or, conversely, was he simply trying to build a Jewish market, even exploit the Jews for commercial benefit? The picture is complicated by the fact that Dalí displayed an intimate fascination with Hitler and Franco in the 1930s and ’40s, much to the dismay of his fellow surrealists. And “Aliyah” is not his only Jewish-themed work: He produced other paintings, as well as two sculptures, “Menorah” and “Western Wall,“ whose images he licensed to a man named Jean-Paul Delcourt in 1980. Delcourt has since built a small industry of Dalí Jewish art products.

What to make, then, of a man whose political leanings seem at odds with his artistic output? For Blumenthal, the contrast is not as harsh as it seems. “I think that Dalí was not ideologically a racist, anti-Semite, communist, socialist, fascist or anything,” he said. “He was an artist. He absorbed everything from the environment, took it in, and then transformed it and sent it back out again.” (For those who remain skeptical, it may be helpful to refer to George Orwell, who, in a 1944 review of Dalí’s autobiography, mused, “One ought to be able to hold in one’s head simultaneously the two facts that Dalí is a good draughtsman and a disgusting human being.”)

As for the “Aliyah” series, Blumenthal concludes simply that it was a professionally executed commission, pointing out that some of the greatest artworks in history have been as much — compositions by Mozart and Bach and, this writer would add, paintings by Rafael, Rembrandt and others. “Part of the responsibility of a scholar is to say that this stuff, even if it’s commissioned, is serious,” Blumenthal said. Indeed, when one lets the art of “Aliyah” speak for itself, its bold expressionism and moving imagery answer the question on their own.

Jillian Steinhauer, a Brooklyn-based freelance writer, has written about art and comics for Hyperallergic, Modern Painters, ARTINFO and The Daily Cross Hatch, among other publications.

Dalí and the Jews