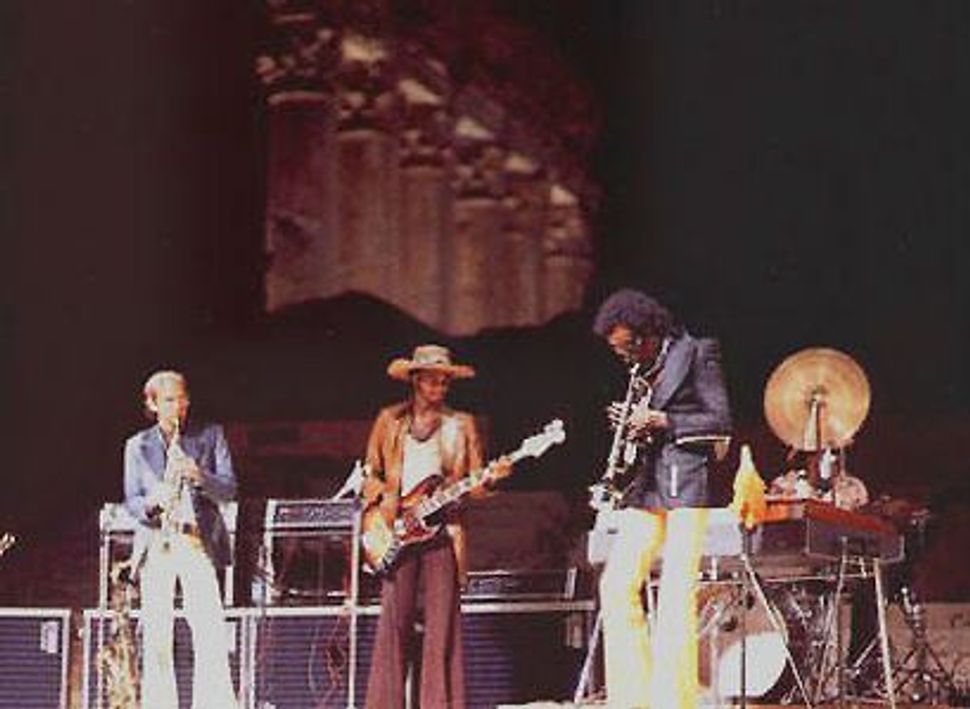 Liebman with Miles Davis in Baalbek, Lebanon in 1973. Image by Courtesy Phillip Lutz 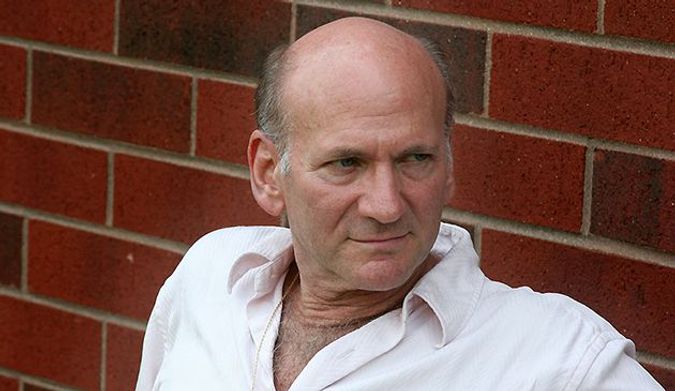 Sweet Horn of Peace: David Liebman played alongside Miles Davis in the early 1970s, and since then his jazz career has been marked by broad Jewish influences. Image by Jamey Aebersold

David Liebman’s reputation as a conciliator dates back to his days as a saxophonist in Miles Davis’s electronic ensembles of the early 1970s, a turbulent time when cultural assumptions were under fire — and Liebman, whose mind-blowing improvisations and Jewish kid’s mien made a singular impression on Davis’s bandstand, helped build consensus amid the fray.

Those times, of course, are long gone. But Liebman’s standing as a builder of cultural bridges is as strong as ever — a standing that will be put to something of a test April 16, when, as the soloist in the world premiere of an extended work for big band, he will be asked to find common ground between the Jewish and Arabic traditions.

By virtue of its context, the work, by Bret Zvacek, director of jazz studies at the Crane School of Music at the State University of New York at Potsdam, will be freighted with political significance. It is being presented as part of a semester-long symposium on war and peace at Syracuse University. The symposium has already generated heat, even as it shed light on some difficult topics; Liebman’s performance may do the same.

Zvacek’s piece takes its title, “If a White Horse From Jerusalem,” from a poem by the late academic Ada Aharoni, a Cairo-born Israeli whose work is rich in anti-war imagery. While Zvacek stressed in an interview with the Forward that his composition is not intended as a vehicle for making peace — it “doesn’t resolve anything,” he said — the language in his program notes suggests that he has fashioned the musical equivalent of a difficult political negotiation.

“The music is written in opposing tonalities,” he wrote. “Resulting dissonances and densities are the musical result of neither side yielding to the other.”

Striving to strike a cultural balance, Zvacek, who will conduct the Central New York Jazz Orchestra, draws in roughly equal measure from Jewish and Arabic sources, juxtaposing and interweaving klezmer pitch sets, Islamic hymns and the like with an almost mathematical symmetry. He assigns roles to specific reeds, with the clarinet at one point offering “the Jewish view” and the tenor saxophone presenting “the Arab opinion.” Ultimately, he leaves it to the soloist — Liebman, on soprano saxophone — to “seek common ground between the two.”

Liebman, who in January received the 2011 NEA Jazz Masters Award (he had already won high honors in France and Finland), seemed impressed with Zvacek’s aspirations for the piece, writing in an e-mail to the Forward that it was “ambitious, to say the least.” Always a skeptic, he was hesitant to make predictions about his ability to find the common ground Zvacek was seeking.

But he was not reluctant to endorse the use of art to foster communication, nor to assert that he would bring a Jewish sensibility to the task. Raised in the Reform tradition in Brooklyn, he has at times mined the Jewish experience — most notably, perhaps, in “Atonement,” a haunting work for string quartet and soprano saxophone that incorporates the opening strains of “Hatikvah.”

Liebman started writing “Atonement” on Yom Kippur in 1979, the same year he released his album “Dedications,” which included “Treblinka,” a remembrance of the concentration camp, written by pianist Richie Beirach, a longtime collaborator. More recently, he appeared on drummer Michael Stephans’s 2007 album “Om/shalom,” a jazz-inflected collection of Jewish favorites and Stephans originals. He hopes to explore the work of A.Z. Idelsohn, the Latvian-born cantor and musicologist active in the first half of the 20th century.

Though Liebman’s formal exploration of Jewish themes constitutes the lesser part of his oeuvre — which encompasses jazz of the free, fusion, straight-ahead and various European schools, in addition to his special brand of world music — he noted that his sound, especially on soprano saxophone, typically recalls the cantor’s wail whatever the material at hand might be. 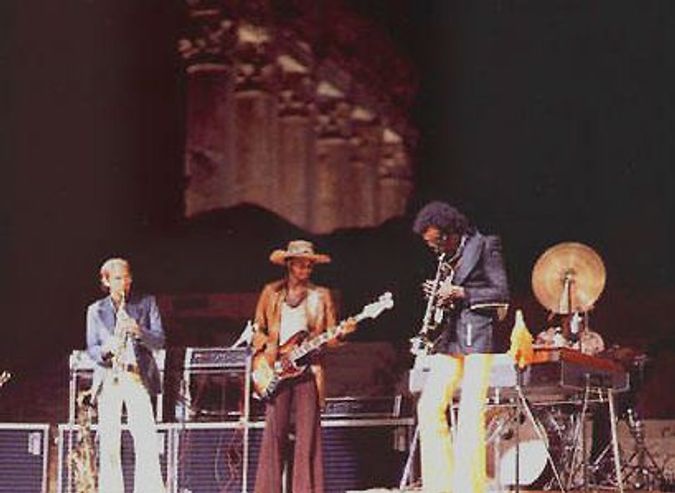 Liebman with Miles Davis in Baalbek, Lebanon in 1973. Image by Courtesy Phillip Lutz

At the same time, he said that he does not consciously try to emulate the sounds of the synagogue; his tone and texture might, to some ears, suggest the African-American or Islamic liturgical chant. And while he identifies spiritually as a Jew in this life, a quest to find his “past lives” once yielded, through a meditative dream, the image of a man with a straight horn standing on hot, white sand — an image undifferentiated by religious or tribal association.

“Whether it’s Jewish or Bedouin or Semitic, I don’t know,” he told the Forward. “But that version of who I am and what I’ve done over the years — I feel that it goes back to that.”

Liebman’s take on his musical past — a somewhat ecumenical one, given his avowedly Jewish sensibility — is matched by views of a musical future marked by building global bridges. He has just celebrated the 20th anniversary of the International Association of Schools of Jazz, an organization he founded that connects member schools in 25 countries, including Spain, Poland and Israel. And he continues to expand the roster of musicians comfortable with fusion’s syntax, having in March revisited tunes from Davis’s 1972 album “On the Corner” on a European tour with Indian and French players.

Liebman’s broadminded approach should also serve him well as his involvement in the Syracuse project ramps up. The project, Zvacek said, has been shaped to an unusual degree by “nonmusical dynamics” — essentially, the need to consider Jewish and Arabic sensitivities in all phases of its development. Liebman’s participation, he said, has already made the creative process smoother. And it’s made prospects for its success greater.

“The fact that I was writing for Dave,” he said, “framed the whole thing.”

Phillip Lutz writes frequently about music in the New York region for The New York Times.