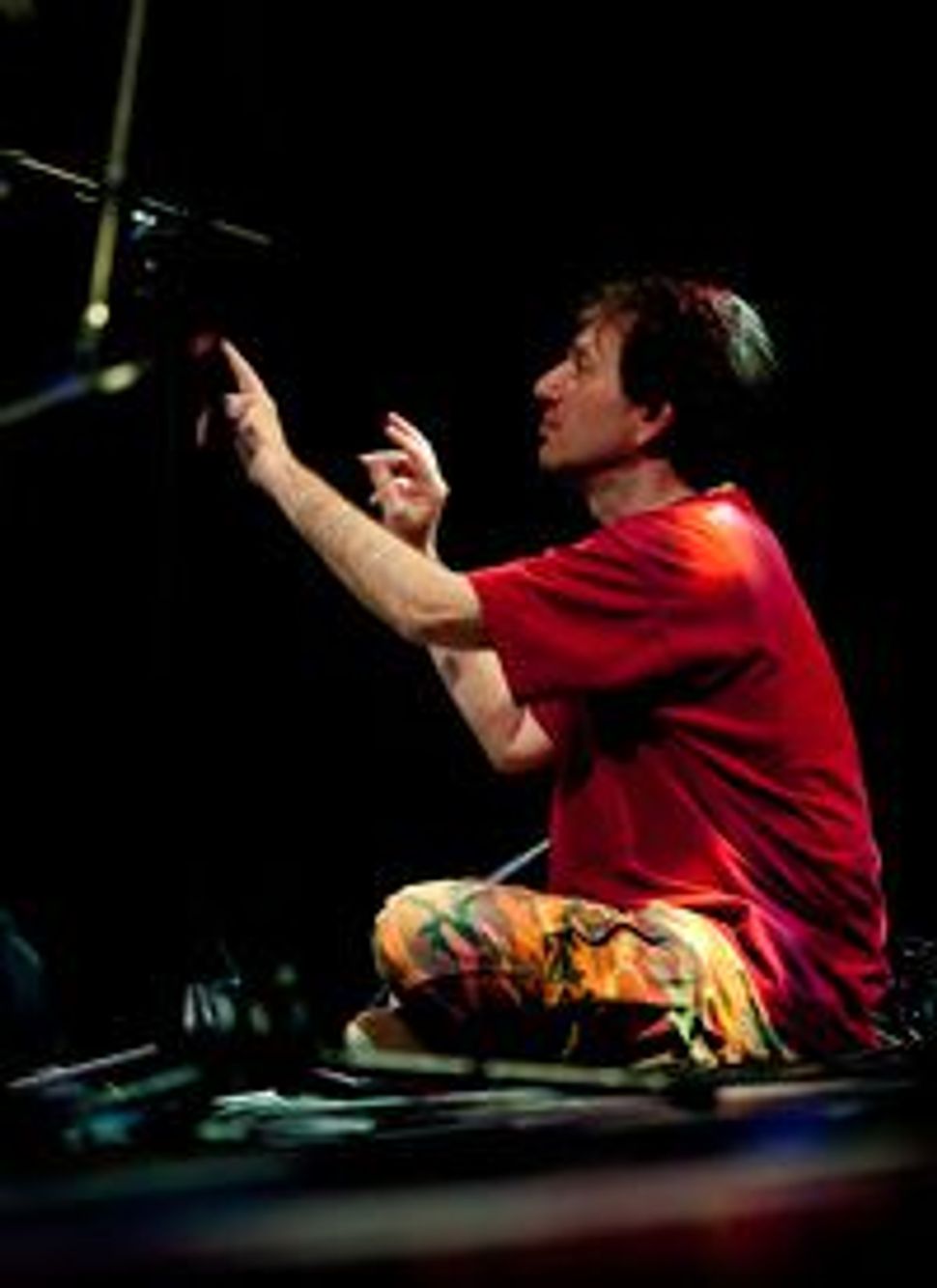 On Top of the Mountain: John Zorn conducts, seated, on the stage of the New York City Opera, at Lincoln Center. Image by heather o?brien

Is there a more vital Jewish composer than John Zorn right now? If there is, I don’t know who. Zorn’s amazing, postmodern, rockin’-swingin’-classical-noisy Masada Marathon, held March 30 at New York City Opera, was yet another stamp of mainstream approval for this 30-year fixture of the downtown New York music scene, who performed in his customary T-shirt and camouflage pants. I can’t think of a musical event that made me feel so joyful at the possibilities of this particular wayward tribe to be the source of authentic cultural genius.

The marathon consisted of 36 performances — by 12 ensembles working in widely different genres — of Zorn compositions from “The Book of Angels,” a huge anthology of more than 300 tunes composed over a frenetic three-month period in 2004. As Zorn explained at one point during the show, the songs themselves, each dedicated to a different Jewish angel, are short melodic compositions — “six lines of music,” he said — which form the basis for interpretation and improvisation. This method is reminiscent of many jazz compositions, especially those of fusion-era Miles Davis and John McLaughlin, as well as Indian classical forms such as the raga, in which modal compositions are elaborated upon by an ensemble of musicians. 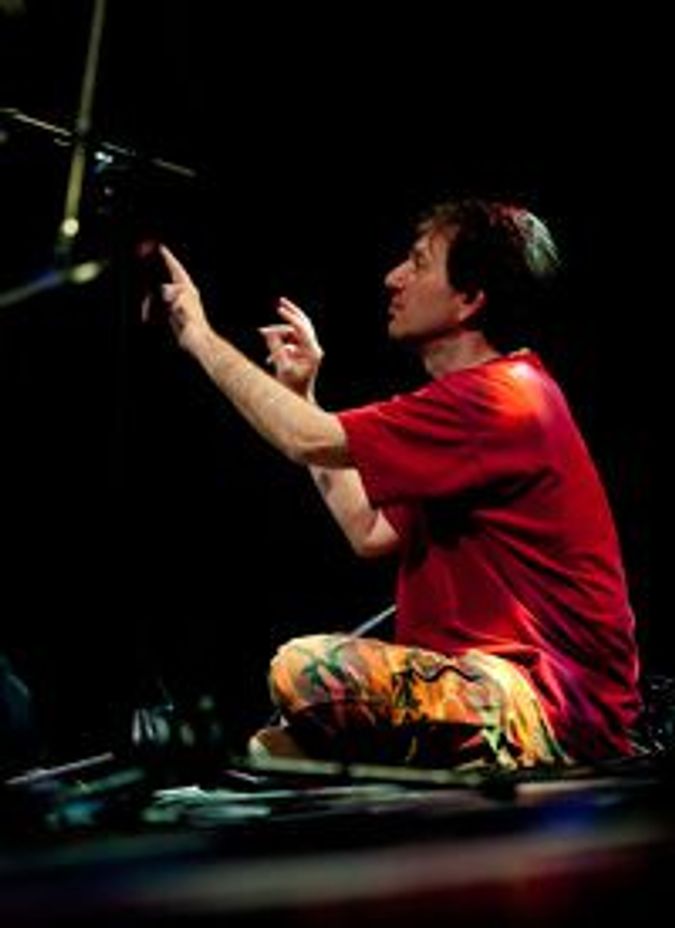 On Top of the Mountain: John Zorn conducts, seated, on the stage of the New York City Opera, at Lincoln Center. Image by heather o?brien

But this is also Zorn, which means that the styles quoted, fused, deployed and exploded included klezmer, 20th-century art (“classical”) music, progressive rock (some ensembles included members of the1980s’ experimental band Mr. Bungle and the lead singer of ’90s rock icons Faith No More), out jazz (at times way out), Jewish vocal music, Latin rhythms, surf rock, jam-bands and even mellow lounge music. As advertised, it was indeed a marathon — four hours, by the time the last howls finished — and served to underscore how obsolete genre has become for postmodern art and music. Limitations of genre and form have long made little sense in the age of the iPod, in which juxtaposition and mixing are the rule rather than the exception, and Zorn seemed to delight in transgressing every possible boundary of musical convention. “I’m confused,” a 70-something lady sitting next to me said between sets.

Which is not to say that there were no commonalities. Throughout, the compositions — dissonant or consonant, quiet or furiously loud — were quintessentially Zorn: the minor and diminished chords of Eastern European music together with an avant-garde sensibility that, by now, is almost familiar to longtime fans. That the pieces were so closely linked in terms of compositional style, and so easily identifiable as Zorn’s, made the formal juxtapositions all the more thrilling.

Let’s face it: Most contemporary Jewish music is kitsch. Whether nostalgia or novelty, it quotes pre-existing forms without the self-consciousness of history. Oy! The clarinet! Ha! Jewish heavy metal! What these forms of pastiche miss is that they are surrounded and interpenetrated by 1,000 other forms, that there is no purity or innocence of form anymore, if indeed there ever was. A klezmer riff does not exist in splendid isolation from a surf tune (Jewish versions of “Miserlou,” best known as the “Pulp Fiction” theme, are by now staples of many wedding bands), and the plenitude of forms available to the postmodern musician means that a formal choice must be both conscious and self-conscious if it is to transcend cliché. But most Jewish music is a simulacrum of a nostalgic Jewish past, or a juxtaposition of that past with some new form. Rather than engage in meaningful conversations with other musical forms, it panders to an ersatz sense of Jewish authenticity. As with all authenticities, this is a mirage. In today’s world, there is nothing more inauthentic than authenticity, no matter how many faux-leather-bound ArtScroll volumes suggest otherwise. What is authentic is artistic cosmopolitanism: throwing it all together and drawing upon Jewish particularity not as a means of separation, but as yet another spice in the bouillabaisse.

I don’t mean to suggest, however, that “The Book of Angels” was an academic exercise. It was more like a fun, raucous, rave-up: Miles Davis’s Bitches Brew meets downtown jam by way of Primus and “Nachman of Bratzlav.” Marc Ribot, who by now has won “Best Guitarist in the World” awards from every guitar-insider poll, busted out fiery prog-rock solos, blues riffs, even Hawaiian-sounding mellowness. Percussionist Cyro Baptista’s new band, Banquet of the Spirits, made me want to shake my City-Opera-seated behind. And the snarl on the face of drummer Billy Martin (from Medeski Martin and Wood — performing with bassist Trevor Dunn instead of Chris Wood) said it all: Whatever heavenly hekhalot, or dwelling, they inhabit, Zorn’s angels are badass. They strut, bleat, show off. Even the quieter ones seem to sidle up with attitude, slithering like their fallen comrade, Lucifer.

There were quieter moments, including Uri Caine’s solo piano set, Erik Friedlander’s solo cello and the vocal performance by Mycale, a quartet made up of Ayelet Rose Gottlieb, Sofia Rei, Basya Schechter and Malika Zarra. But the climax of the evening was Zorn’s large ensemble, “Electric Masada,” which closed the marathon with three very different numbers: a jazz-orchestral romp reminiscent of John Coltrane’s “A Love Supreme,” an out-jazz piece that would have pleased Sun Ra and, finally, what I can only call Noise-Rock-Fusion-Yoko-Ono-Faith-No-More-Hazanut, featuring FNM’s Mike Patton on “vocals” (more like moans, screeches and wails). They brought down the house.

The names that Zorn chooses for his projects — like Bar Kokhba and Masada — often connote resistance and heroism. And indeed, the night felt as though vanished downtown haunts like the old Knitting Factory, Tonic and Luna Lounge had temporarily conquered Lincoln Center. But it also felt like a victory of the real, multicultural and vibrant neighborhood south of Houston and east of the Bowery over nostalgia for the vanished one. Viva la Lower East Side!

Jay Michaelson is a columnist for the Forward, Religion Dispatches and the Huffington Post.