She Got Moving Images Moving 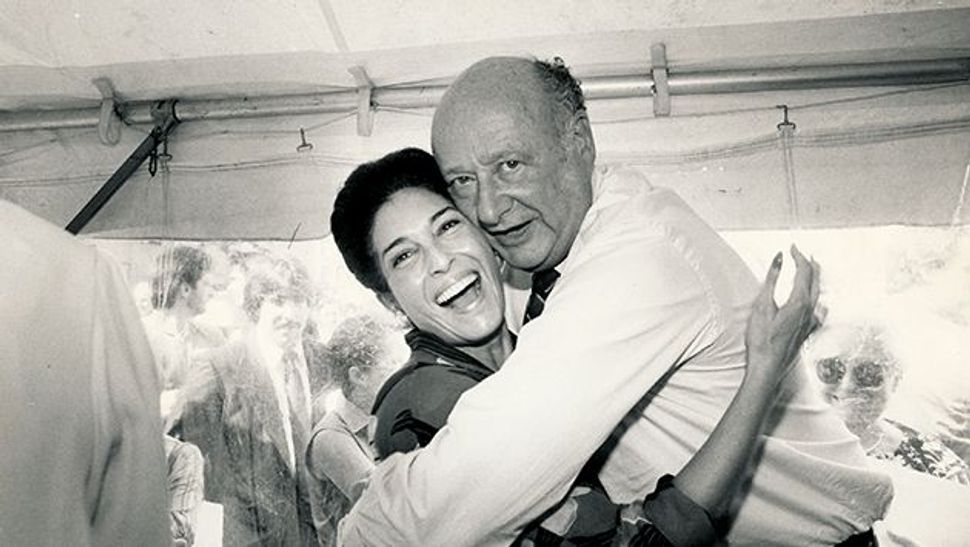 Hugging Hizzoner: Slovin feels Mayor Koch?s love for her project at the groundbreaking event for the museum in 1986. Image by Helaine Messer

The end of this year’s presentation of the Academy Awards marked the final wrap on the 30-year career of Rochelle Slovin, founding director of the Museum of the Moving Image. In an industry that immortalizes art, the museum defines Slovin’s legacy — bringing audiences behind the magic of the moving image. And now, with the completion of the museum’s expansion and renovation project, Slovin is calling “cut” and retiring.

Watch Rochelle Slovin recollect about her life and work:

As the museum’s director, Slovin has woven together the strands of her two greatest interests: art and politics. Rewinding her story, she remembered what the nurse said to her when her son was born. It was 1965. The Tonkin Gulf Resolution had just passed authorizing U.S. military action in Vietnam. The nurse brought Slovin her infant son and said, “We give birth to them, and then they kill them.”

The birth of her first son strengthened her commitment to politics. She joined Women Strike for Peace and became active in the anti-war movement, but politics was something in which Slovin had always been involved. She first campaigned for presidential nominee Adlai Stevenson in 1952, when she was only about 12 years old. Slovin believes that adolescence is often when young people become engaged in the government and in social action.

Slovin has also always loved the arts. Her parents often took her to the theater and to the ballet. “I saw ‘Oklahoma!’ when I was a really tiny little girl, and I remembered it forever,” she said. Slovin believes that she — indeed, that we all — owe something to the larger community. The museum is her contribution.

Before the renovation, the museum served about 30,000 school children each year. Since the expansion, that number has doubled. “The institution is about education… and that’s the way you give to the community,” Slovin said.

In the ever-popular core exhibit, “Behind the Screen,” visitors can go through the process of making moving images, practicing their production skills with interactive software and lighting. From video games to 19th-century optical toys, from antique cameras to modern audio equipment, audiences can experience the evolution of the film and television industry. Under the direction of architect Thomas Leeser, the new expansion and renovation of the Museum of the Moving Image also debuted a 267-seat theater and a 68-seat screening room.

Jews have played a preeminent role in the film and television community since its inception. But Slovin notes how few films discuss explicitly Jewish ideas and how few Jewish actors play overtly Jewish characters: “I admire ‘A Serious Man’… I think the Coen brothers were very brave… honest and true to themselves.” She feels that despite their enduring presence, Jews are still stigmatized within the industry.

Now that the museum’s expansion and renovation are complete, Slovin is ready to hand over the reins. Senior deputy director Carl Goodman will succeed her. “This is the perfect time for a transition,” Slovin said.

What’s next for the founding director of the museum? Not sleep; after a brief vacation, Slovin plans to continue her work in arts and politics. Although she has no explicit plans she reassured the Forward, “I will find my way.” She would love to work more on live drama. Perhaps directing political theater is next.

Meredith Ganzman is a former multimedia producer at forward.com. She also reports for Theatermania.com.

She Got Moving Images Moving