The Pope, the Jews and the Vatican Museums 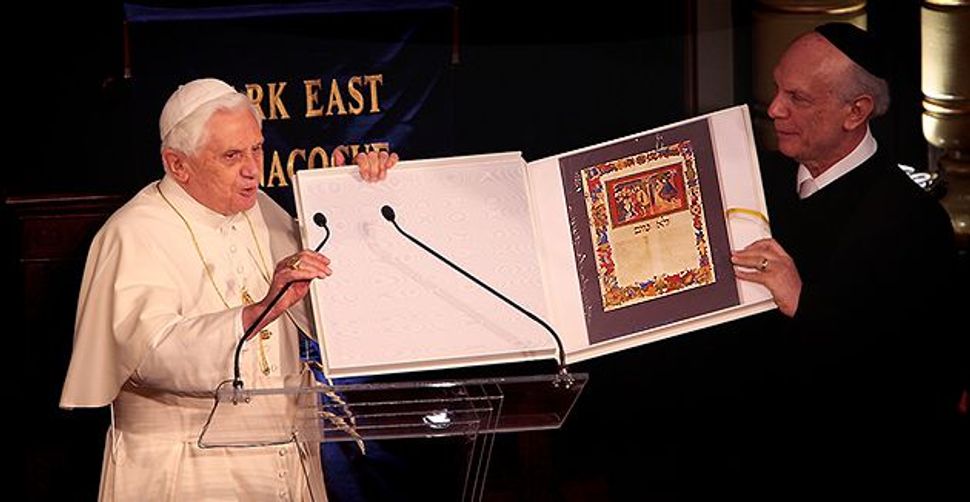 In his new book, Pope Benedict XVI unequivocally states that not all the Jews in antiquity, and none of the Jews today, are to be held responsible for the death of Jesus. Although the statement is welcome, it breaks no new theological ground. Since the Vatican II council, the Roman Catholic Church has bravely and honestly (if not always consistently) faced up to its past and has developed a remarkable and sophisticated place for the Jews in Catholic theology.

During a recent visit to the Vatican Museums, which sit only steps from the papal residence, I wondered whether the museums ever received the memo. Unlike the theological books and pronouncements, which have limited circulation, the Vatican Museums receive 20,000 visitors a day and offer an unparalleled opportunity for the church to educate and extend its mission.

Yet to visit the Vatican Museums is to enter a vision of Christianity that not only fails to acknowledge the complicated and tortuous history between the church and the Jews, but also seems to deny the very theological connection to the Jews upon which the official Vatican statements insist. In room after room of magnificent art, art that portrays important scenes from the New Testament, there is a strange absence of Jews. It is understandable that the curators may not have wanted to display some of the more virulently anti-Semitic depictions produced by Christians through the ages, but the near-total absence of artworks that depict Jews seems to erase the Jews from Christian history.

Even more peculiar is the display of Jewish objects owned by the Vatican. The Vatican library has an extraordinary collection of Jewish manuscripts from the Middle Ages, many of them illustrated and many of them acquired forcibly. Although the library makes them available for traveling exhibitions and is generally forthcoming about allowing scholars to see them, none is on public display at the Vatican Museums themselves.

The problem extends to the few Jewish objects that the museums do display. A series of ancient Jewish catacombs around Rome has been excavated and has yielded a large number of beautifully inscribed epitaphs. A collection of these inscriptions is housed within the museum complex in what is known as the Gregorian Profane Museum. This adjoins the Pio-Christian Museum, where Christian art from antiquity is displayed.

Unlike modern usage, the term “profane” in this context does not have negative connotations. “Profane” here means simply not holy or pious. Jewish artifacts, like those of the Greeks and Romans that comprise the bulk of the Gregorian Profane Museum, were not Christian, ergo they were profane. Housing these Jewish items in the Gregorian Profane Museum thus appears to make good theological sense.

Yet, actually it doesn’t make sense. The church officially began its re-evaluation of the relationship between Christianity and Judaism during the Vatican II Council when, in 1965, it released the statement Nostra Aetate, or In Our Age. Nostra Aetate unequivocally states that neither all Jews in the past, nor any Jews today, are to be held responsible for Jesus’ death. Moreover, it affirms that even today, God holds the Jews “most dear.”

For almost 40 years, the church theologians have struggled to define more precisely what “most dear” actually means. In 2002, the Vatican released an English version of a document prepared by the Pontifical Biblical Commission, titled “The Jewish People and Their Sacred Scriptures in the Christian Bible.” (The Italian version was released in May 2001.) A long and dense document released with no fanfare, this text lacked the zip and drama of Nostra Aetate. At the same time, it takes a large theological step beyond that revolutionary document. According to section 21,

Jewish messianic expectation is not in vain. It can become for us Christians a powerful stimulant to keep alive the eschatological dimension of our faith. Like them, we too live in expectation. The difference is that for us the One who is to come will have the traits of the Jesus who has already come and is already present and active among us.

Christian theologians will and should parse this paragraph more fully, but this statement comes after a long discussion that rejects the position that the birth and death of Christ was a “fulfillment” of the covenant with Abraham; God’s covenant with the Jews is still in effect, even after the coming of Christ. In fact, the text goes on to state, in section 22,

Christians can and ought to admit that the Jewish reading of the Bible is a possible one, in continuity with the Jewish Sacred Scriptures from the Second Temple period, a reading analogous to the Christian reading which developed in parallel fashion. Both readings are bound up with the vision of their respective faiths, of which the readings are the result and expression. Consequently, both are irreducible.

Jews and Christians wait, side by side, for ultimate salvation.

And this, then, brings us back to the Vatican Museums. At least since 2001, Judaism has, in the eyes of the church, ceased to be “profane.” It, like Christianity, is “holy.” Housing the items from the Jewish catacombs in the Gregorian Profane Museum with artifacts from ancient Greece and Rome would thus seem to be in tension with the teachings of the Vatican itself. Jews, in this new teaching, really are not like Greeks and Romans.

Therefore, the museums miss an opportunity to convey their current understanding of the theological place of Jews and Judaism, and perhaps even undermine it. The museums can do a better job reflecting the church’s position.

How? I suggest that the Vatican Museums open a section devoted to Jews and Judaism. This museum should exhibit not only Jewish antiquities, but also other Jewish treasures owned by the Vatican (for example, manuscripts), as well as Christian art that depicts Jews. The very addition of such a museum in the complex would display the same admirable courage as the church itself in dealing with Jews and Judaism, an implicit acknowledgment that Jews are part of the Christian story.

The contents of such a section would be of great interest to a great many visitors. The Vatican’s Judaica collection is interesting in its own right, and now there is no logical place in the museum complex to display it. Just as important, though, these objects often raise troubling questions of acquisition, which touch on the larger issue of historical Jewish-Christian relations. The way to deal with these questions, though, is not to hide the objects.

Pundits have pointed out that the pope’s statement is important not because it is novel — which all acknowledge it isn’t — but because it is explicit and publicly accessible. With minimal effort and cost, the pontiff has an opportunity to make a far greater impact right at his own doorstep.

The Pope, the Jews and the Vatican Museums