A Bridge, Yes, But to Where? 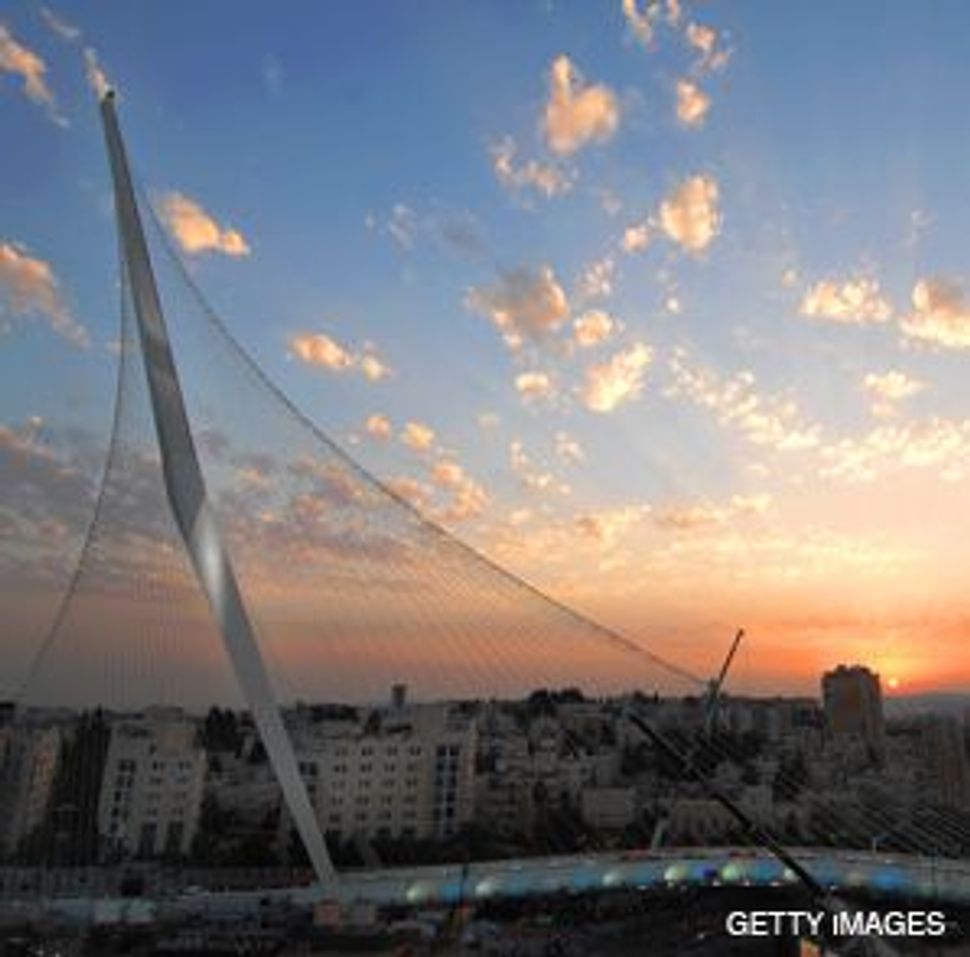 SKY MILES: A long-necked bird? A human arm? King David?s harp? Everyone has a theory about the meaning of the 387-foot, $73 million Chords Bridge.

Approaching Jerusalem by Highway 1 from Tel Aviv, the mast of architect Santiago Calatrava’s Chords Bridge first rears up from atop a distant ridge, a white bolt against the eastern sky. At 387 feet, the central tower, with its 66 cross-strung steel cables, is now the tallest structure in the city, and its completion has been attended with a volume of controversy and fanfare on scale with its size. 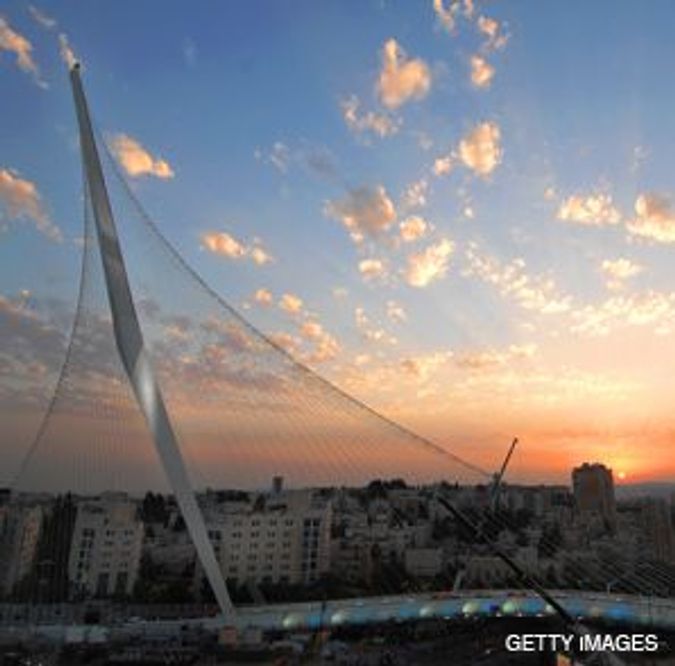 SKY MILES: A long-necked bird? A human arm? King David?s harp? Everyone has a theory about the meaning of the 387-foot, $73 million Chords Bridge.

At a cost of $73 million, the impressive modern structure is only one part of the proposed Jerusalem Light Rail’s Red Line, linking the historic city center with residential districts to the east and west. A glass-covered walkway on the bridge’s inner margin allows pedestrians to take in the sweeping views as the 1,181-foot span vaults over the hectic intersection of Jaffa Road and Shazar Street, carrying the rail line across in a gentle parabola and setting it down lightly on Herzl Boulevard.

Foot traffic, however, will be the only traffic on the bridge, at least for the next two years: The construction of the Jerusalem Light Rail is over budget and behind schedule, with operations not slated to start until 2010. In the meantime, the function of the Chords Bridge will be largely symbolic. But, as everyone from architecture critics and politicians to average citizens has been asking, symbolic of what?

In Jerusalem, everyone seems to have a theory. Some have suggested that the looming pylon represents the bust of a long-necked bird; others see a human arm; still others an arrow caught in a taut bow. Jerusalem Mayor Uri Lupolianski, the project’s foremost booster and a key figure in the selection of Calatrava, favors the “David’s Harp” interpretation, though both he and Prime Minister Ehud Olmert received fulsome boos at the bridge’s June 25 opening from locals who have dubbed it “the Clothesline” and derided it as ungainly and out of place.

For his part, the Spanish-born architect has tended to downplay the symbolic element, claiming instead that mast and bridge alike find their form in the requirements of the program. At a press conference the day of the opening, Calatrava tugged at the edge of a table to demonstrate how the single-angled tower, set to one side, pulls against the forces exerted by the curving bridge. Winner in 2005 of the American Institute of Architects Gold Medal, Calatrava has built his career on iconic projects that, like his extension to the Milwaukee Art Museum, combine bold engineering with signature grace, even as many critics complained that he too often sacrificed structural horse sense for the grand gesture. In the case of the Chords, he readily admits to an aesthetic objective, recounting how Lupolianski called on him “not just to design a beautiful bridge, but the most beautiful bridge I have ever designed.” Calatrava said he was satisfied with the result.

But broader questions concerning the bridge’s symbolism and its function go straight to the heart of the ongoing debate about the future of Jerusalem. When completed, the first phase of the Jerusalem Light Rail, which includes the bridge, will connect Mount Herzl in the West to the northeastern community of Pisgat Ze’ev. The latter was established in 1982 on land in East Jerusalem annexed by Israel after the Six Day War, and it constitutes the largest of the disputed Jewish settlements. By connecting it via public transportation with pre-1967 Israeli Jerusalem, Israel’s government runs afoul of United Nations conventions against development in occupied territories.

As reported by Haaretz in 2006, the Dutch ASN Bank cited U.N. resolutions prohibiting such development when it divested from the French firm of Veolia Environment, which had been contracted to help construct and run the Jerusalem rail. Both Veolia and French-owned train manufacturer Alstom are currently being sued in French court by the Palestine Liberation Organization for their involvement with the project, and the suit threatens to scare off other foreign investors, leading in turn to still more delays.

In a city riven by religious and ethnic divisions, even the bridge’s opening ceremony was cause for contretemps. The $500,000-plus event featured live dancers who were ordered to wear long dresses and head coverings so as not to offend ultra-Orthodox attendees. With the anniversary of reunited Jerusalem a focus of the national anniversary, and a mayoral election in the fall, the outcry from the moderate and secular press was amplified to a roar that all but drowned out the bridge’s inaugural festivities.

“Bridges join places that were separated,” Calatrava has stated. “A bridge makes a lot of sense in a city like Jerusalem.” At present, it’s difficult to see what the Chords Bridge has succeeded in connecting, other than the construction site on one side and the construction site on the other. Just last week, in what authorities are calling an act of terrorism, a Palestinian man commandeered an earthmover not far from the Chords Bridge and drove it up Jaffa Road into traffic, killing two people before being shot dead by police. For the time being, the Chords Bridge, Jerusalem’s first iconic building by an international “starchitect,” appears to be little more than a pretty, well-intentioned white lie; if setbacks continue, Jerusalemites might find themselves stuck with a big white elephant.

Ian Volner is a writer and critic in Manhattan.

A Bridge, Yes, But to Where?