‘Rabies,’ a Horror Film With Bite 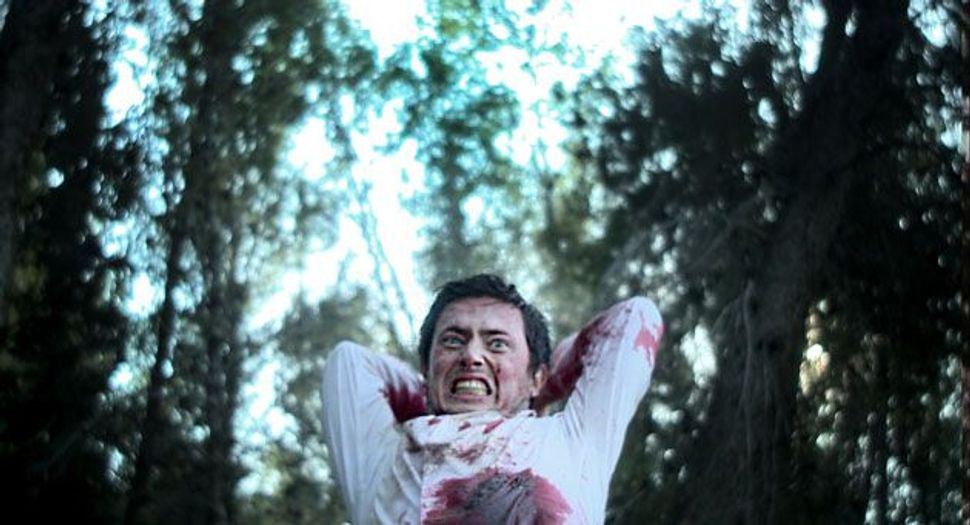 Bloody Mess:Ofer (Henry David) plays the older brother who goes off to get help. Image by Guy Raz

In covering the Tribeca Film Festival this year, I’ve marveled at just how many times I’ve read the description of the 2010 film “Rabies” (“Kalevet”), by writers/directors Aharon Keshales and Navot Papushado, as “Israel’s first horror film.” Really? Because isn’t the coverage of the whole mess of the Arab-Israeli conflict an ongoing horror film in and of itself? In the cinema, too, anyone who has seen the brilliant recent Israeli film “Lebanon” or “Waltz With Bashir” will acknowledge that either one of those films will bring you more terror, and many more sleepless nights, than “Scream 4” ever could.

Once we get past the differences between real and staged horror, though, it turns out that “Rabies” is a successful stab at the horror genre. It takes the American paradigmatic horror film and turns it over on itself, mocking it as much as it celebrates it. The film has nothing whatsoever to do with the wild-animal breed of rabies. And given the film’s promotions, showing ample blood and a prominently featured dog, this comes as a welcome surprise. And everyone in this film kills someone else — except the “killer,” who doesn’t actually kill anyone. “Rabies” plays with your expectations, and has a great time doing it.

How many times, after all, have we all seen the cliché of the pretty girl with the tight dress and heels being chased in the woods by the psychopathic killer? There’s never a really good explanation for why a pretty girl is out lost in the woods or for why she viewed her Manolos as good hiking footwear. And “Rabies” provides none for why this particular pretty girl is in these Israeli woods at the start of the film. Nor is there any good explanation for how Tali, played by Liat Harlev, got caught in some sort of elaborate trap in the forest, or why she’s involved in an incestuous relationship with her brother. Right — it’s weird.

But when her brother, Ofer (Henry David), goes off to find help, that’s precisely when the local neighborhood serial killer type (Yaron Motola), complete with sketchy jumpsuit attire, shows up to pull her out of the trap and slap a gag and handcuffs on her. As his jumpsuit alone would convey, he clearly has nefarious, albeit spur-of-the-moment, plans for what to do with Tali, and it doesn’t have much to do with looking for her brother. Ofer then stumbles on the requisite carful of nubile, horny teenagers in tennis gear: the hot, if ditzy, blonde, Shir (Yael Grobglas); the vaguely lesbian Adi (Ania Bukstein); the semi-responsible Mikey (Ran Danker), and the obnoxious Pini (Ofer Shechter).

The guys go into the woods to help out Ofer, while the girls stay by the car and phone for help. When help comes, though, it’s two Keystone Kop types, Danny and Yuval, who are at least as dangerous as whatever awaits those in the woods. And it is in this examination of the nonhorrific human condition that “Rabies” shows its smarts. It dramatizes the knowledge that being human — with all its attendant idiocies, mistakes and jealousies — can be much more dangerous and horrifying than any “horror” or “slasher” concept could ever possibly be. This being an Israeli forest, there are undetonated mines and unsprung bear traps galore: the presence of these obstacles illustrates that any setting (but especially in this part of the world) is full of potential landmines that are just a part of life. But these dangers pale in comparison with the latent dangers that lie in ourselves.

Everyone in this film illustrates how prone people are to snap at the smallest things, and how easily mistakes can be made. Danny Geva, as a perfectly sinister sexual harasser of a cop, Yuval, pushes things just one step too far for Adi. Lior Ashkenazi, underused as the sidekick cop, Danny, leaves phone message after phone message for his wife, confessing his own inadequacies and infidelities, and by the end of the movie drags himself home to delete them. Everyone is pushed to the brink by the “situation,” and with disastrous results. There’s also the highly cynical underlying message that when you try, selflessly, to help out, like the park ranger Menashe (Menashe Noy), you’re much more likely to get a sledgehammer in your face than you are to succeed.

Given the film’s provenance, it’s sort of hard not to read the Israeli-Palestinian conflict into the total mess of blood and carnage — and that’s hardly unintentional. Sometimes, the film implicitly contends, we find ourselves in a “situation” (Israelis often refer to the conflict as “HaMatzav,” or “the situation”) that makes us act in ways we couldn’t possibly have expected or wanted. This film is absurd, but whip smart. And make sure you stay after the credits run, for one of the best one-liners in Israeli cinema.

‘Rabies,’ a Horror Film With Bite