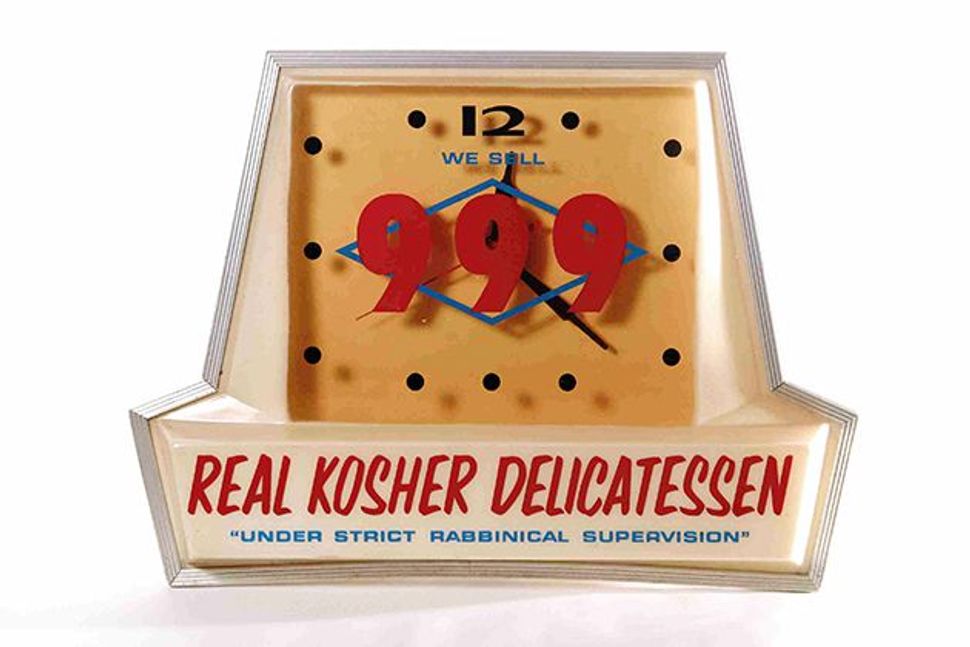 It?s Kosher O?Clock! Isn?t it time that YOU were under strict rabbinical supervision? Image by COURTESY OF NATIONAL MUSEUM OF AMERICAN JEWISH HISTORY, PETER H. SCHWEITZER COLLECTION OF JEWISH AMERICANA

Time fascinates me, personally as well as professionally. For one thing, I don’t have enough of it. For another, one of my favorite historical monographs — A. Roger Ekirch’s “At Day’s Close” (W.W. Norton & Company, 2005) — just happens to be a study of night. Drawing on folktales, material culture, ecclesiastical regulations and bedtime rituals, Ekirch explores the variety of ways in which European society in the 15th and 16th centuries reckoned with the end of the day. What I relish most in this dazzling and imaginative exercise in reconstructing the past is Ekirch’s ability to think in both human and historical terms about a natural phenomenon.

Most recently, the publication of Elisheva Carlebach’s book, “Palaces of Time: Jewish Calendar and Culture in Early Modern Europe” (Harvard University Press), also put me in a temporal frame of mind. In its attentiveness to the relationship between the marking of time and the maintenance of community, this account heightened my understanding of the cultural underpinnings of the calendar. So, too, did a concomitant exchange with a student who mentioned that she was going out of town to attend an “early Seder.” Mandated by logistics, her Seder — which, mind you, took place several weeks prior to Passover — accommodated the scheduling needs of its guests rather than the demands of the Jewish calendar. Convenience trumped custom.

My student’s “early Seder” was hardly the first time American Jewish families set their clocks to their own idiosyncratic rhythms. In fact, as I started to think about how time has as much to do with culture as it does with nature, examples of American Jewry’s flexible and even inventive entanglement with Father Time accumulated.

Consider the practice of concluding the Yom Kippur fast at 3 p.m. or 4 p.m. instead of when night falls, several hours (and growling stomachs) later. Or, more dramatically still, how about American Jewry’s penchant for redefining the traditional, 25-hour Sabbath as a nocturnal experience limited to Friday night?

American Jews, especially during the late 19th and early 20th centuries, have also been known to exchange the traditional Sabbath service for one held on a Sunday morning, in the hopes of boosting attendance. American Jews, meanwhile, are apt to cut shiva down to size. As traditional mourning ritual would have it, shiva lasts seven days. As some of its contemporary practitioners would have it, the mourning period takes the form of “receiving friends” between 6 p.m. and 9 p.m. on the evening following the funeral.

When it comes to tinkering with time, it’s not as if American Jews have had to fend for themselves, as did their ancestors who lived in the heart of medieval Christendom, let alone ancient Babylonia. The latter had few fixed points on which to draw. American Jews, in contrast, have any number of calendars and clocks and other timekeeping devices to orient them. True, they might not be as sumptuously colored and cleverly designed as those that figure in Carlebach’s book, which abounds in illustrated wall charts and dials that are fashioned out of layered paper rings. But at no point did modern American Jewry want for ways to tell time — Jewish time, that is.

Here, as with so many other phenomena characteristic of American Jewish life (think “Maxwell House Haggadah”), businesses ranging from kosher butchers and food manufacturers to banks took the lead in producing and disseminating a luach, or inventory of dates. Their ranks included Diamond Crystal Salt, which published “The Jewish Housewife’s Guide” in the 1930s, and Stuhmer Baking Co., which produced all manner of breads, along with a bilingual almanac. At first blush, this association between the commercial and the calendrical might strike us as odd, let alone sacrilegious. But on second thought, it makes perfect sense. These enterprises, after all, had to be particularly sensitive to those moments during the year when Jewish consumers adjusted their schedules.

Funeral homes also produced Jewish calendars, or what they helpfully called “yahrzeit memorandums,” to remind family members that the time for memorializing their deceased was right around the corner. Some were personalized and marked the specific date of the yahrzeit; others left that date open, to be filled in, and duly noted, by the family.

Whether intended for a pocket, hung on a wall or stationed inside a kitchen cabinet, most Jewish ritual calendars were businesslike, frill-less affairs; the softening touch of aesthetics was in noticeably short supply. But if the National Federation of Temple Sisterhoods had had its way, Jewish calendars would have been suffused with art. In the years immediately preceding and following World War I, the female members of this Reform organization, seeking an “artistic reminder of things Jewish,” produced an annual calendar that featured reproductions of the oeuvre of such Jewish artists as Jozef Israels, Moritz Oppenheim and Boris Schatz, as well as reproductions of the Jewishly themed paintings of Rembrandt. When, not surprisingly, the latter edition sold out, one member of the sisterhood proudly, and innocently, reported that the “Rembrandt calendar for 5686 was the most artistic of any distributed so far.”

Art calendars by no means exhausted American Jewry’s repertoire of time-sensitive materials. Soon enough, electrified clocks with Hebrew numerals or Hebrew letters gained momentum. So, too, did large-scale time pieces whose armature boasted of ties to Kosher Zion meat products or those manufactured by 999, a rival concern whose smoked goods were said to be examples of a “real Kosher Delicatessen.” Either way, these big, bold clocks advertised the virtues of keeping kosher as well as keeping time, adding another layer of meaning to how modern-day American Jews experienced the big hand and the small hand of Jewish life.