And Rains in Their Due Season 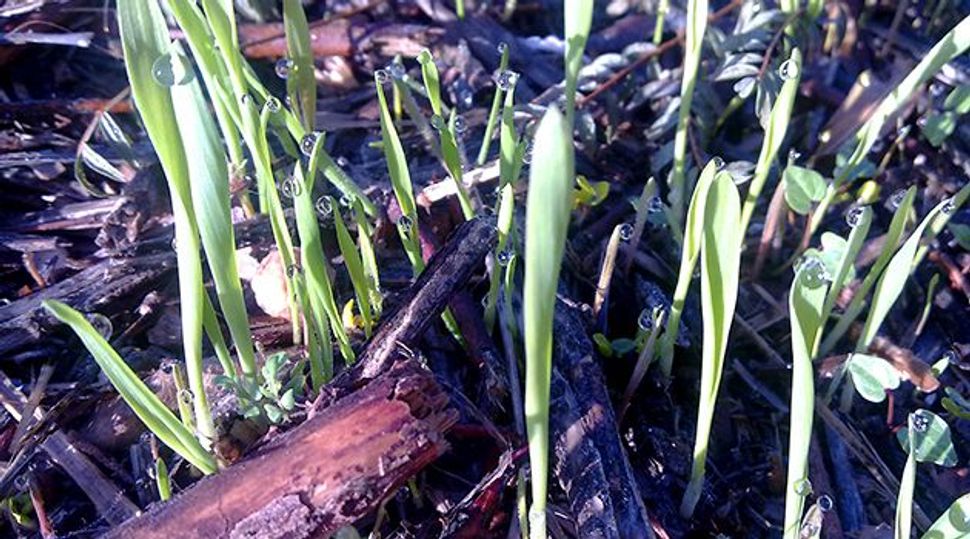 Malkosh in the Spring and Yoreh in the Fall: As spring rains fall we look forward to the fall rains from which, as shown above in Jerusalem, life springs. Image by WIKI COMMONS

It rained fairly heavily in Israel the week after Passover, and since anything more than a few drops is rare here after April, it was probably the year’s last downpour. Real rain is unlikely to fall again before late September or October, and there are years in which the first autumn showers don’t come until November. The winter months of December, January and February are the rainiest ones, after which precipitation starts tapering off again.

Hebrew has special words for the rains that directly follow and precede the long, dry Mediterranean summer. The early rain of autumn is the yoreh, and the late rain of spring, the malkosh. I like the sound of both words — the soft syllables of yoreh, as though touching the earth shyly after a long absence; those of malkosh are fat and heavy, as the drops of our spring rains often are.

Though still used today, they’re old biblical terms. Malkosh is indeed one of the few Hebrew words for which we have a partial pre-biblical provenance. This occurs in a 10th-century BCE agricultural calendar inscribed on a clay tablet and found 100 years ago at the archaeological site of Tel Gezer, in central Israel. According to the Gezer calendar, the first half of the year consists of “two months of gathering the harvest [asif], two months of early sowing [zera], and two months of late sowing [lekesh].” The first round of sowing grain in the ancient Middle East took place in November and December, when the early rains had softened the ground enough to plow it easily; a second round, called lekesh, then followed in January and February. But for the lekesh to succeed, there had to be rain in the less dependable months of March and April, too. This was called the malkosh, and close to half an inch of it fell in my garden during Passover.

“I will give you the rain of your land in its due season,” God says to the Israelites in Deuteronomy, “the first rain [yoreh] and the latter rain [malkosh], that thou mayest gather in thy grain, and thy wine, and thine oil.” “Wine” meant, of course, the grape harvest, called by the Gezer calendar zamir; “oil,” olive oil, which is pressed from the picked fruit in October and November, after the yoreh has swelled it to full size.

But are the yoreh and malkosh each a series of rains, or is there only one of each? Although there are often several good rainfalls in October and November and several more in March and April, Israelis tend to use the words as if they referred to the year’s very first and last rain exclusively. “I guess that was the malkosh,” a neighbor said to me after our Passover precipitation, as if all the spring rains before it hadn’t counted.

This confusion already exists in ancient sources. “How many [annual] rains are needed for the earth to bear crops?” the midrashic compendium of Vayikra Rabba asks. And it answers: “Rabbi Meir says [at least] two: The yoreh in Marḥeshvan [October–November] and the malkosh in Nisan [March–April]. Rabbi Yosi says at least three: The yoreh and the malkosh and the rains in between.” Since by “the rains in between,” Rabbi Yosi is obviously speaking of a series of rains, he would seem to be using yoreh and malkosh the same way. Yet a bit further on, we read: “Some rabbis say seven rains: The yoreh, the malkosh, and five in between.” Now, like the five “in-between” rains, the yoreh and the malkosh are each considered a single rain.

Perhaps the issue is resolvable if we take into account that rain in Israel commonly takes the form of low-pressure fronts, bringing with them much intermittent precipitation over a period of several days, interspersed with intervals of blue skies. When the rabbis spoke of a necessary minimum of “seven rains” for a harvest, therefore, they must have been thinking of seven such several-day periods, of which the yoreh and the malkosh were each one. (This is a figure that is about half the annual average for Israel.) The malkosh, in that case, would be neither many separate rain fronts nor a single drizzle lasting a few minutes or hours, but the last extended rain of March or April, one that, falling from skies that cloud over and clear up and cloud over again, drops enough moisture to keep the fields green for a few more weeks before summer turns them brown and yellow.

And Rains in Their Due Season