Piaf’s Paramour, and Much More 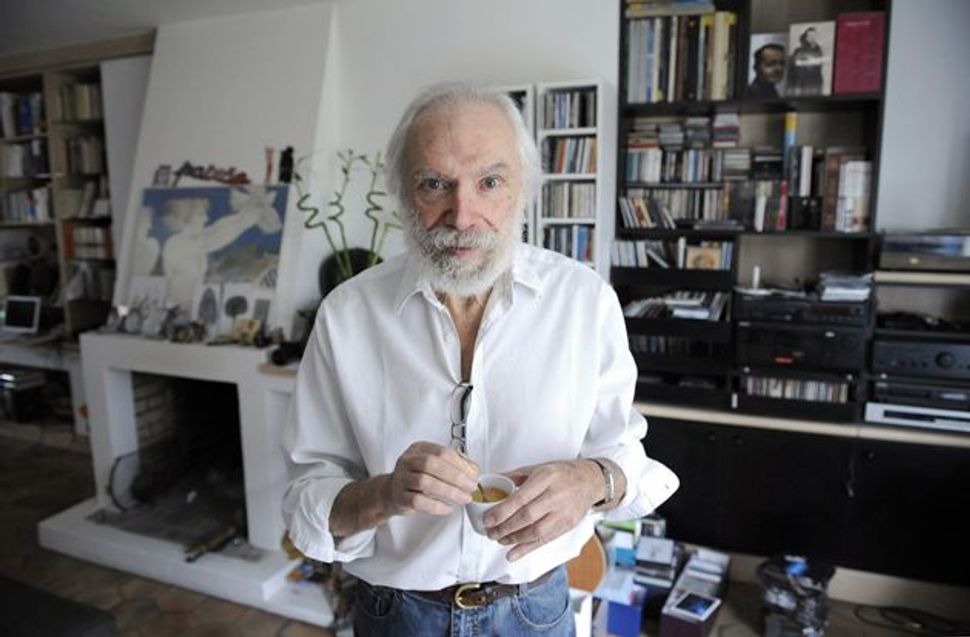 Chanteur: Franco-Greek singer and songwriter Georges Moustaki poses on April 28, 2008, at his home in Paris. His first solo hit was the song ?Le Meteque.? Image by Getty images

The French singer-songwriter Georges Moustaki (born Giuseppe “Yussef” Mustacchi, to a family of Greek Jews in Alexandria, Egypt) is still mainly remembered outside France for his brief, stormy love affair with Édith Piaf. Although Moustaki penned the lyrics for Piaf’s resounding 1959 hit “Milord,” the song’s raucous, honky-tonk aura is far from Moustaki’s own ruefully reticent compositions. Yet a memoir, “The Song-Maker’s Wisdom” (“La Sagesse du Faiseur de Chansons”), out this past February from L’Oeil-Neuf Editions, explains that although musically reticent, Moustaki is resolute and decisive in celebrating his Jewish identity.

One such instance is Moustaki’s affectionate song “Jewish Mothers” (“Les Mères Juives”), in which a gently cradling melody, punctuated by a quietly witty klezmer clarinet, expresses mournful regret over the loss of a Jewish mother. Beginning with affectionate teasing about the subject (They are sweet and attentive / Jewish mothers), the song ends with sentimental regrets that the singer’s Jewish mother can no longer criticize him (When my little mother spoke to me that way, I found it unbearable / yet since I am overwhelmed by her absence, I dream of hearing each night: I know you’re over 70, but you’re still my boy. / She was pure as spring water / My Jewish mother.” (Whose final rhyme was the adorable, “Elle était pure comme l’eau vive/Ma mère juive ”).

Moustaki explains in “La Sagesse du Faiseur de Chansons”: “From a taste for Jewish mother stories, which are among the most delicious Jewish anecdotes, I wanted to write a song on the subject. I didn’t realize that I was writing a song about my mother, Sarah. The resulting song makes people smile, but when I refer specifically to Sarah in the last two couplets, the smiles turn misty-eyed.” Even so, Moustaki’s melody is marked by a restraint that is notably absent in the quasi-operatic hysteria of “My Yidishe Mame” and other comparable laments.

This touching reserve and modesty about an emotionally explosive subject won Moustaki many fans, including a surprising 2008 tribute in song by the young Swiss-born performer Célina Ramsauer. In her “Letter to Mr. Moustaki” (“Lettre à Monsieur Moustaki”), Ramsauer expresses how she is moved by Moustaki’s “Les Mères Juives,” and she is joined in performance at her song’s end by Moustaki himself, who reiterates his love for his “all-encompassing mother,” Sarah. She notes that his original song was written to “endure the sadness of remembering the one I loved, lost forever, my sweet Sarah, my tender mama.”

“Lettre à Monsieur Moustaki” also praises Moustaki’s human qualities, especially his humility. Indeed, humility is an essential part of Moustaki’s artistic makeup. He surely would not claim any personal wisdom, despite his memoir’s title. “La Sagesse du Faiseur de Chansons” simply belongs to a series of volumes that tout the “wisdom” of professions such as storyteller (Muriel Bloch) and journalist (Marc Kravetz), all of which are credited with similar “wisdom.”

Moustaki’s understated docility was unusual at a time when French singers such as Jacques Brel and Serge Gainsbourg were brashly triumphing. Moustaki’s relatively retiring personality appealed to the hypersensitive French-Jewish singer known as Barbara (born Monique Andrée Serf), who called Moustaki “ma tendresse” (“my tenderness”) and for whom he wrote “The Lady With Brown Hair” (“La Dame Brune”). Moustaki was also the perfect songwriter for the emotionally vulnerable, tormented actor/singer Serge Reggiani (one poignantly affecting love song that Moustaki wrote for Reggiani, “Sarah,” adopts the name of Moustaki’s mother as love object).

Gags about Moustaki’s apparent lack of voltage do not lessen the innate seriousness of his message in such songs as “The Soldier” (“Le Soldat”), about a childhood friend whom Moustaki often visits at Mishmar HaEmek kibbutz in northern Israel. In Moustaki’s song, the soldier-narrator regrets that he had hoped to “make flowers bloom on the desert” but instead must fight for his nation’s survival. As Moustaki told SVP-Israel magazine in 2009, the real-life friend represented as narrator in “Le Soldat” is “by no means discouraged, because he is and remains a man of duty. Yet his destiny [in Israel] is not what he had dreamed it would be. [‘Le Soldat’] is also a song of compassion for all the soldiers who might have imagined and hoped for something other than a soldier’s life, which circumstances have forced upon them.”

Moustaki’s typical self-effacement once led the witty journalist Claude Sarraute to claim in Le Monde that Moustaki arrives onstage “the way people wander into a bathroom, before they are quite awake.” Another colleague nicknamed him “Mr. One Volt,” a French showbiz joke referring to the relatively weak galvanic charge of Moustaki’s performances compared with the singer Gilbert Bécaud, who was known as “Monsieur 100,000 Volts.” Likewise, Moustaki has been called “the singing softie” (“le mou chantant”) comparing him humorously to a different star, Charles Trenet, famed as “le fou chantant” (“the singing fool”). In Moustaki’s case, docility and meekness became a form of artistic expression, inspired by low-key, but exquisite, Brazilian bossa nova performers, such as João Gilberto.

Moustaki added to the same interviewer that the “increasing importance of what is happening in the Middle East and the clash of civilizations which we are now experiencing” motivated him to an increased identification as Jewish: “A marginal Jew, but a Jew all the same.” In 2000, Moustaki co-authored a memoir, “Son of the Fog” (“Fils du Brouillard”), with Siegfried Meier, a friend and Holocaust survivor of Romanian origin whose family was murdered at Auschwitz. Published by Les Éditions de Fallois, “Fils du Brouillard” looked to the recent past.

In 2008, Moustaki published a collection of short stories about Israel, “Seven Tales From a Land in Front of Us” (“Sept Contes du Pays d’en Face”), with [Actes Sud][14]. Yet even decades before, Moustaki’s first major solo hit, 1969’s “Le Métèque” (a pejorative term for a Mediterranean immigrant), situated him, according to its lyrics, as a shaggy-bearded foreign outsider: With my mug like a Mediterranean immigrant / Wandering Jew / or Greek shepherd (Avec ma gueule de métèque / De Juif errant / de pâtre grec).

“Le Métèque” struck a popular chord in France’s revolutionary 1960s, when, at least in theory, excluded people were clamoring to be included. Yet Moustaki’s status as wandering Jew was imprinted even earlier, when at age 14 he was “thrilled,” as he tells SVP-Israel, by the declaration of Israel’s statehood not long before his family moved to France in 1951. Moustaki subsequently visited Israel for the first time in 1963, and he often performed there, including a fondly remembered evening with the Rishon LeZion Symphony Orchestra.

Learning Hebrew and bathing in the Dead Sea, which he finds helps his chronic tendinitis, Moustaki enjoys Israel’s natural landscape as much as he does his performances, such as a much publicized 2006 appearance at the Culture of Peace Festival at Tel Aviv’s Tzavta Theater. At the latter event, such Israeli stars as the late Yossi Banai and Chava Alberstein sang Moustaki’s songs, and Moustaki himself performed a song in Hebrew, “Pitzuim” (“Reparations”), about a young child who has lost everything in wartime.

Calm in a tempest-tossed landscape, Moustaki’s ongoing inspirations in prose deserve translation into English so that they may become appreciated internationally, as so many of his songs have long been.

Watch a 2008 homage to the above song by Célina Ramsauer, who is joined at the end by Moustaki himself.

And listen to a part of Moustaki’s song “Le Métèque.”

Piaf’s Paramour, and Much More