God Is an Indie Band 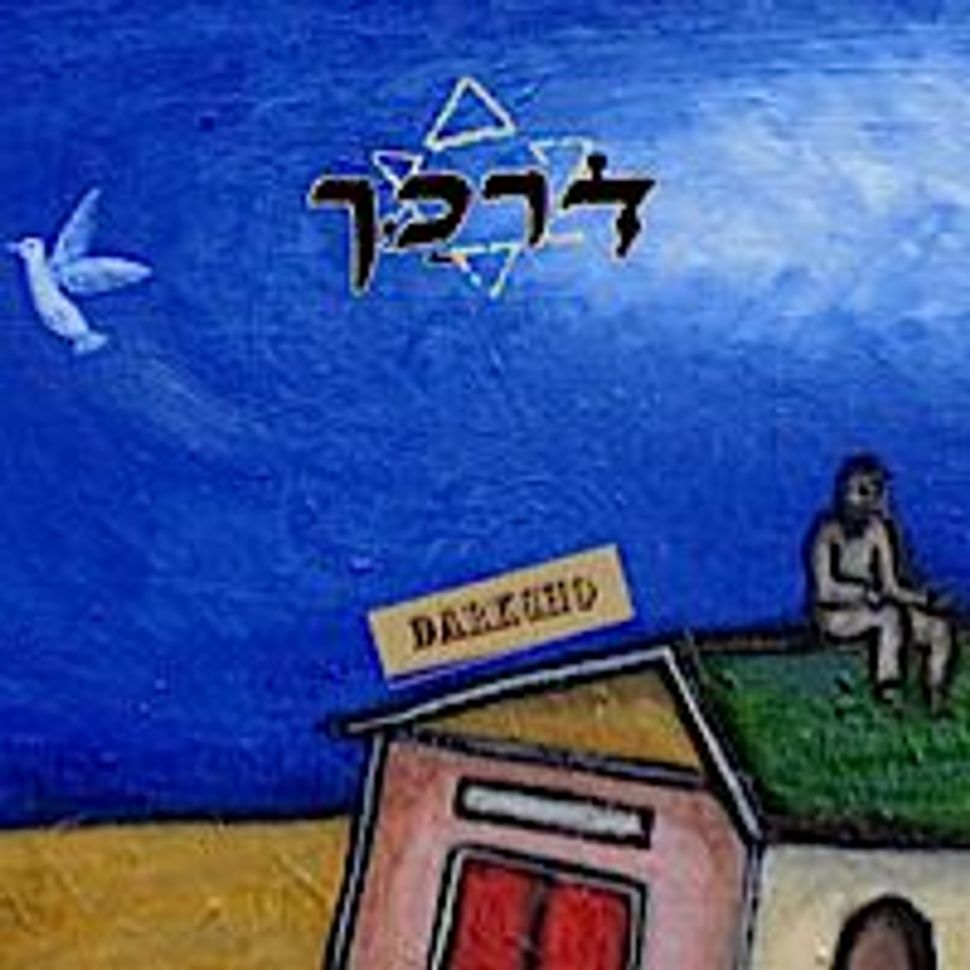 Darkcho: An album of mysterious provenance 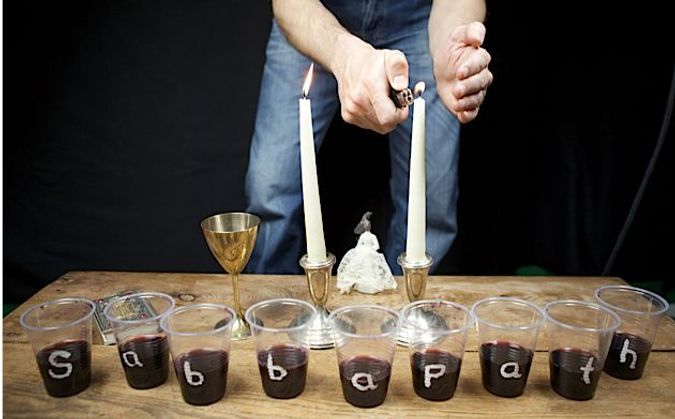 Makeshift Shabbat: Bands such as Sabbapath and The Sway Machinery bring religious material to a secular audience. Image by Courtesy of JDub Records

I was sitting at my desk sometime last fall, when a press release from Shemspeed records landed in my inbox, plugging a record called “Darkcho.” Shemspeed was acting as promoter and distributor, but the album was of mysterious provenance. The press release, playing up the sense of mystery, went so far as to say that “there is no label, there is no website, there is no way of finding out any more information.” Okay, I thought. Let’s give this a listen.

“Darkcho” is the kind of album that can pull you out of the quiet whirlwind of a normal weekday and leave you slack-jawed from the beauty of it. The songs are traditional melodies, mostly from the High Holiday services, and are performed with the kind of soaring intimacy that makes you feel, for that moment, as though nothing else exists in the world. 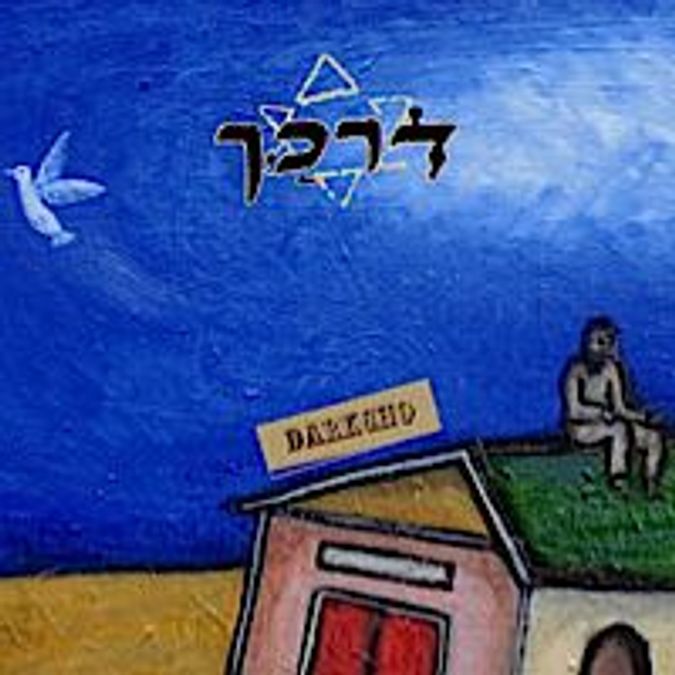 Darkcho: An album of mysterious provenance

The first sound is a muted trumpet, elegantly declaiming a melody from Hallel, the special Psalms of praise recited on most Jewish holidays. It is joined by an acoustic guitar, which seems simultaneously near at hand and immensely far off. Then the murmur of an accordion, lifting the brass aloft as if on a pillow of sound. As the song ends, the trumpet and accordion fade away, leaving the melody, alone on the guitar, disappearing into darkness.

This basic configuration continues throughout the album, with the addition of vocals that burn with a quiet intensity. The words are mostly taken from the High Holiday prayers. The second track, “Ki Hiney,” is from the service for the night of Yom Kippur: “Like clay in the hands of the potter / At his will he expands and at his will he contracts / So are we in Your hands, O Creator of kindness.”

As an album thematically occupied with the High Holy Days — also known as the Days of Awe — “Darkcho” perfectly expresses the heady mix of joy and trepidation, deep reverence and utter ecstasy that the occasion evokes. On that workday afternoon, while my colleagues typed and talked on the phone, I shivered with delight under my headphones.

“Darkcho” came to mind again recently, while listening to another album, called “To The Seventh Sunset” by Sabbapath, recently released by JDub Records. Like “Darkcho,” Sabbapath employs acoustic arrangements to complement familiar synagogue melodies. “Seventh Sunset” is also loosely structured around a prayer service; in this case, the Friday evening Shabbat service. According to its creator, Rob Markoff, the album was inspired by a vinyl LP from 1974, called “Sing Out It’s Shabbos,” featuring “Chuck Taylor-clad teenagers strumming guitars on the cover.” Though it was described as “a folk rock Sabbath celebration by the young people of Temple Shaari Emeth, Englishtown, N.J.,” Markoff was disappointed to discover that the album was a poorly recorded acoustic performance rather than the communal chanting he had been hoping for. Still, he was impressed by the unidentified rabbi leading the service. So, using samples of the rabbi’s speeches, Markoff set out to recreate the hippie-ish, ’70s-style synagogue sing-along he had hoped to hear.

The result is less impressive than “Darkcho,” but both works represent a growing phenomenon in Jewish music. In both cases, a prayer service — a religious activity with devotional music — has been adapted for ends not necessarily religious. While the intention of “Darkcho’s” creators seems devout — according to the only available artists’ statement, included in the press release, the songs “speak of self nullification and redemption, the need for healing and discovering the depths of the Holy One Blessed Be He in this world and the next” — the album is being sold not as a religious product, but as “indie” music. That is, music for young, secular listeners, who are more likely to put an album of religious songs on their iPods than to hear them in shul.

Consider yet another JDub album of recent years: The Sway Machinery’s first release, “Secret Melodies Revealed,” featuring Jeremiah Lockwood’s setting of the Rosh Hashanah liturgy to horns and electric guitar. In this case, the material was not just recorded but also performed, on Rosh Hashanah, at the Angel Orensanz center, a building that was once a synagogue on the Lower East Side of New York. Some would consider such a performance not just secular, but sacrilegious. I don’t share that judgment, but the show was definitely not a component of most traditional brands of Judaism I’m aware of.

And this is just the beginning. Take Girls in Trouble, a JDub band whose albums, including the new “Half You Half Me,” reinterpret the stories of biblical heroines; Galeet Dardashti, who has explored similar material from within the Sephardic tradition; 8th Day, a Los Angeles-based Lubavitch rock band whose latest album is titled “Chasing Prophecy”; the re-interpretation of Hasidic nigunim by the Breslov Bar Band and Jeremiah Lockwood; and Yoshie Fruchter’s Pitom, whose recent “Blasphemy and Other Serious Crimes” also addresses High Holiday-type themes. The list goes on. Not all of these artists employ the explicitly devotional material of “Darkcho,” Sabbapath and The Sway Machinery, but they all present religious content in a decidedly non-traditional context.

If it seems strange that artists and record labels should court a secular audience with religious music, or that secular listeners should be attracted to the same, perhaps it shouldn’t. The search for transcendent experience in art, where it might previously have been sought in religion, has been a characteristic of the modern world since romanticism. It is fitting that this sensibility should make use of works specifically created for the purpose of religious transcendence. And it is equally fitting that music, as the primary devotional art form in Judaism, is the main medium for this type of work. Thus the artists recreating the cries of the hazan, the quicksand melodies of the nigun, the songs we grew up singing in shul. Not verbatim — with interpretation, imagination — but originating in that material nonetheless.

As powerful as this approach can be, it is not unproblematic. On many of its tracks, “Seventh Sunset” illustrates the potential weakness of the religious-secular mix. Often, even where the words address God, the music doesn’t. Indeed, “Seventh Sunset,” more than “Darkcho,” lives up to the latter’s description as “more like an indie folk rock album with tradition than what you would expect of a religious album.” At other times, the recording simply fails to accomplish the aim of the real-life event on which it’s based, as in the Bu-Jew-style “Om Shema.” However effective the Shema may be as a mantra, listening to it intoned for more than three minutes on an album doesn’t do the same trick.

Yet “Seventh Sunset” has its highs also, such as the second track, “Hinei Ma Tov.” Now there’s a number aimed straight at the gooey nostalgic center. Has anyone gone to a Jewish summer camp and not sung “Hinei Ma Tov” around the campfire? As it happens, however, “Hinei Ma Tov” is one of the album’s strongest tracks. There is a reason, after all, why the song is such a classic, whether because of its sweet folk melody or its message from Psalms of brotherhood and love. Like the campfire scene it evokes, the experience may be contrived, but the resulting fellow-feeling can be genuine nonetheless. As the rabbi on the album explains, “It’s good, it’s beautiful, it’s fun for us all to be here, and that’s the spirit of our service tonight.” In other words, there’s no reason not to feel good, even if by cheesy means.

At moments such as these, Sabbapath illuminates one part of the rich territory also being explored by “Darkcho,” The Sway Machinery and others. The profusion of Jewish music in recent years, coming from labels like JDub, Shemspeed, Tzadik and the like, is often understood to represent a cultural, rather than a religious identification with Judaism. That may be true, but many listeners, myself included, also feel what you might call a spiritual impulse, coupled with skepticism of religion. For that, and for us, there is music such as this.

Ezra Glinter is editor of The Arty Semite blog and the Arts and Culture Fellow at the Forward.

God Is an Indie Band