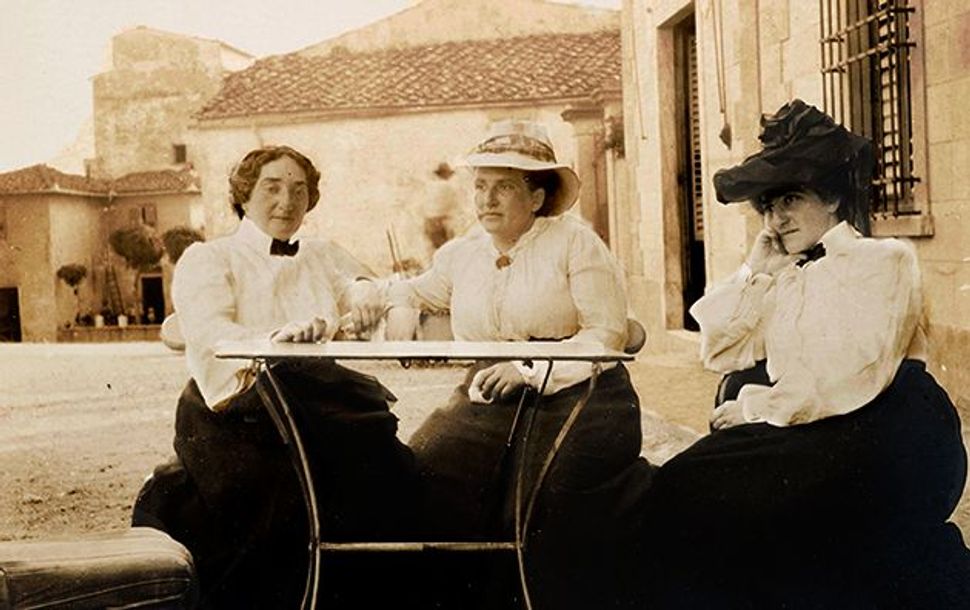 Ladies of Baltimore: Close friends (above, from left) Claribel Cone, Gertrude Stein and Etta Cone on a trip to Settignano, Italy, in 1903. Image by courtesy of the baltimore museum of art: the cone collection

In 1898, Etta Cone was given $300 by her brother, Moses, to buy something nice for their Baltimore family home. Their father had just died, and Moses was hoping that a new piece of furniture or some nice table linens would cheer everyone up. Etta, 38 at the time, returned with five paintings by the American Impressionist Theodore Robinson, whose work, along with the Impressionists in general, was mostly unknown and unappreciated in the United States.

This first foray into art collecting sparked a lifelong passion for Etta and her sister, Claribel, one that brought them, in full Victorian regalia, to the Montmartre studio of an impoverished unknown named Picasso, to the Parisian salons of Gertrude Stein and to the aid of a Matisse who was then suffering at the hands of critics and who eventually became a lifelong friend.

A new exhibit at the Jewish Museum in New York, “Collecting Matisse and Modern Masters: The Cone Sisters of Baltimore,” running until September 25, showcases highlights from the sisters’ first-rate collection while also telling the story of how they amassed these works and the friendships they made along the way.

Spread out through five rooms, the show displays personal artifacts, such as diaries and letters, as well as over 50 works from their collection, which at its height totaled nearly 3,000. Including paintings, sculptures and drawings by such artists as Cézanne, Gauguin, Renoir, van Gogh and a very blue Picasso, the show could also serve as a small career retrospective for Henri Matisse, whom the Cones began collecting in 1906. In addition to drawing the sisters, Matisse created his great work, “Large Reclining Nude,” for their collection, knowing that, through the Cones, it would end up in a major American museum.

Highlights of “Collecting Matisse and Modern Masters” include Picasso’s Blue Period “Woman with Bangs,” a portrait of a melancholy middle-aged woman awash in solemn blues, as well as sketches and paintings from Matisse’s series of odalisques, sensual Orientalist portraits of bare-chested women in harem pants. Paul Gauguin’s lush and tropical “Woman of the Mango” is also on display, as is an early pointillist portrayal of the French countryside, “The Highway,” by Camille Pissarro. These are some of the best examples of the Cones’ fondness for brightly colored abstractions, sensitive portraits of women and nudes, which at the time were for the most part considered radical and even scandalous. However, the exhibition wall text does note that the sisters, who kept their collections separate until after Claribel passed away, had somewhat different tastes. Claribel preferred “bolder subjects and styles,” while Etta was drawn to “pleasing interiors and portraits.”

There is also a room dedicated to the intricate jewelry and textiles, including French lace and an 18th century Buddhist priest’s stole, that the sisters gathered during their travels to such then-exotic places as India, Egypt and China.

The Cone sisters were born and raised in wealthy German-Jewish circles of Baltimore, where their family ran a successful textile business. Around the turn of the century, Claribel, the elder by six years who also trained as a doctor, began hosting salons that were occasionally attended by a young Gertrude Stein and her brother — and future fellow art collector — Leo. (Gertrude and Leo’s collection is the subject of an upcoming show at the San Francisco Museum of Modern Art.) The exhibit portrays the relationship with the Steins as pivotal for both Cone sisters; it was through the Steins that they were introduced to Matisse, who called them “my two Baltimore ladies,” and Picasso, on their regular visits to Gertrude in Paris.

The Cones were very close to the Steins in the early 20th century, first in Baltimore and then in Paris, and some believe that Etta, who never married, and Gertrude had an intimate relationship. But by the 1920s, the relationship had cooled, in part due to the jealousy of Alice B. Toklas, who, after meeting Gertrude in 1907, became her lifelong companion. Stein wrote the poem “Two Women” about the sisters: “There were two of them, they were sisters, they were large women, they were rich, they were very different one from the other one.”

When the Cone sisters began buying art, their purchases were based on instinct and personal taste, not the intent to shape a collection. Unlike other contemporary collectors, they were neither connected to galleries and museums nor in command of unlimited resources. While certainly wealthy, the Cone sisters did not have endless funds to accumulate art, which forced them to exercise more discretion when making purchases. Despite these confines, the Cone sisters managed to amass a collection that was both groundbreaking and prescient. At the time, only a handful of Americans were buying the type of work the Cones collected, and the others were almost exclusively in New York.

In fact, only after Claribel’s death, in 1929, did Etta began to view their collections as something that could be combined and presented to the public. In 1934, Etta had a catalog published of their work that garnered great interest from museum directors in Europe and the U.S., and throughout the next 20 years, Etta began strategically adding pieces to the collection that would round it out. These purchases include works by Gauguin and Delacroix that are featured in the show.

In 1949, the year of her death, Etta gave $400,000 to the Baltimore Museum of Art to build a permanent public home for their collection. While pieces from the Cone Collection have been lent out for other exhibitions in the past, this is the first time their story has been part of a show and the first time the decorative pieces have been included.

Matisse’s grandson, Claude Duthuit, who is interviewed in the show’s catalog as well as on the audio guide, fondly remembers his visit to Etta Cone’s Baltimore apartment in 1948. He recalls the sweet potatoes she served as part of the “American lunch” she prepared for them, as well as the way she fondly described each of his grandfather’s paintings, which hung at eye-level on her cluttered walls.

Duthuit quotes his grandfather, saying, “It took a lot of gall to paint these things, but it took much more to buy them.”

Elissa Strauss is a frequent contributor to the Forward and a LABA fellow at the 14th Street Y in New York City.