Crazy Is as Crazy Does 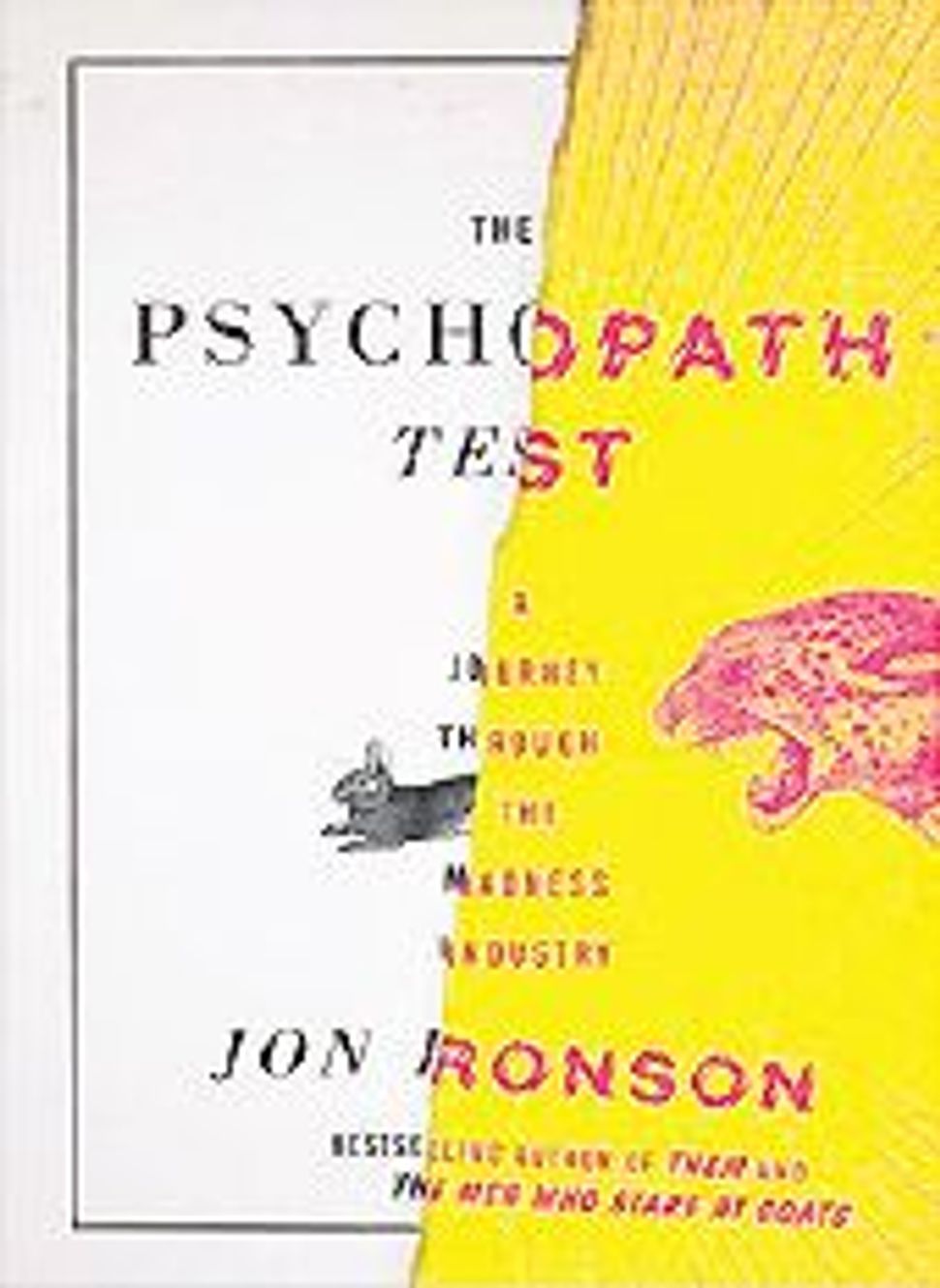 THE PSYCHOPATH TEST: A JOURNEY THROUGH THE MADNESS INDUSTRY, By Jon Ronson

THE PSYCHOPATH TEST: A JOURNEY THROUGH THE MADNESS INDUSTRY
By Jon Ronson
Riverhead Books, 275 pages, $25.95

British journalist Jon Ronson has forged an estimable career out of one fascinating topic: the belief systems of kooks. 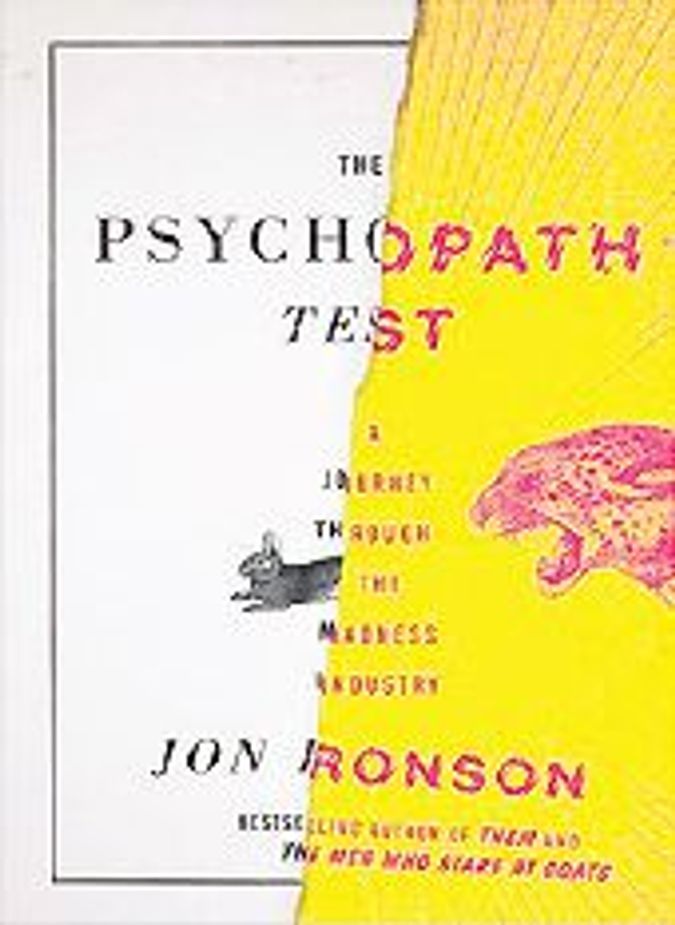 THE PSYCHOPATH TEST: A JOURNEY THROUGH THE MADNESS INDUSTRY, By Jon Ronson

His 2001 book, “Them: Adventures with Extremists,” looked at conspiracy theorists — jihadists, neo-Nazis and the like — and their paranoid fantasies about shadowy elites and Jews. He also famously profiled David Icke, the Englishman who claims that the elites are 12-foot lizards. (Ronson inconclusively wonders if by “lizards,” Icke actually means “lizards,” and not “Jews.”)

In 2005, Ronson published “The Men Who Stared at Goats,” which ferreted out the connections between the obscure New Age schemes of the American military and the depredations of Abu Ghraib. The book begins with Special Forces’ attempts to use psychic energy as weaponry — hence, the staring at goats — and then takes a darker turn to psychological warfare and torture. (The 2009 film with George Clooney was a much lighter, fictionalized take on the themes of the book.)

Ronson’s latest, “The Psychopath Test: A Journey through the Madness Industry,” cuts to the chase by investigating crazy people, period. He is particularly interested in psychopaths, the heartless, manipulative men — for they are almost always men — responsible for a good portion of violent crime and, possibly, corporate malfeasance, as well.

“The Psychopath Test,” we learn in the opening chapters, was inspired by “Being or Nothingness” — not the Sartre book of a similar title, but a mysterious volume sent to prominent academics in America and Britain. Its author is one Joe K., and its pages of “elliptical quotations” don’t add up to much.

Through some Internet sleuthing, Ronson finds the name of the man credited with translating “Being or Nothingness” from Swedish to English. Ronson travels to Sweden and confronts him. Although the translator denies it, Ronson concludes that he is very likely the author and definitely “a crackpot.”

At this point, most journalists would feel that they had wasted their time. This one, however, is inspired. Why? Because the translator’s “craziness has had a huge influence on the world.” It caused the book’s curious recipients to form “a kind of community.” It caused Ronson himself to journey to Sweden — and to wonder if “psychopaths made the world go around.”

“Suddenly, madness was everywhere, and I was determined to learn about the impact it had on the way society evolves,” he writes. “I’ve always believed society to be a fundamentally rational thing, but what if it isn’t? What if it is built on insanity?”

Thus Ronson enters “the madness industry” — by which he seems to mean “psychiatry.” It’s not the most linear investigation: An encounter with Scientologists, who believe that psychiatry is evil, leads the author to “Tony,” an inmate at Britain’s notorious Broadmoor psychiatric hospital, who may or may not be sane. This leads to Bob Hare, a Canadian psychologist who invented a checklist for identifying psychopaths, the “test” of the book’s title.

We also learn about the people who mistreat and exploit the mentally disturbed: the dodgy shrinks and dodgier reality TV producers. This being a Ronson book, conspiracy theorists also make an appearance.

But his adventures in psychopathy are the heart of the matter. And what is a psychopath? Hare describes them as “predators who use charm, manipulation, intimidation, sex and violence to control others and satisfy their own selfish needs.” Some of the items on his checklist include lack of empathy, guilt and remorse; proneness to boredom; promiscuity; and a parasitic lifestyle. (Insert Charlie Sheen joke here.) “The Psychopath Test” presents some unsettling examples of psychopaths in action. The chapters on Emmanuel “Toto” Constant, the Haitian who allegedly terrorized Aristede supporters in the early 1990s, are truly frightening. And it’s difficult to forget the neurologist who showed a psychopath “a picture of a frightened face and asked him to identify the emotion. He said he didn’t know what the emotion was but it was the face people pulled just before he killed them.”

Thankfully, most experts estimate that psychopaths make up less than 1% of the general population. But Hare believes that they are overrepresented in boardrooms. A study he co-authored found that almost 4% of “corporate professionals” scored “extremely high” on his test.

This finding is anecdotally supported by Ronson’s interview with Al Dunlap, the former CEO of Sunbeam who, in the mid-1990s, fired half of the company’s employees and quadrupled its share price. While this may sound rational to some, Dunlap demonstrated the requisite lack of empathy, firing thousands with relish. (He brags to Ronson about how he fired one executive: “You may have a fancy sports car, but I’ll tell you what you don’t have. A job.”) He also missed his parents’ funerals. Now barred by the SEC from serving as an officer or director of a public company, Dunlap lives in a Florida mansion replete with “ferocious sculptures” of “predatory animals” and at least one “giant oil painting of himself.” (Meanwhile, Toto Constant is in prison in upstate New York — not for murdering his fellow Haitians, but for mortgage fraud.)

Ronson doesn’t establish that madness makes the world go around. But that thesis isn’t really the point. The point is in following this anxious, self-deprecating, engaging narrator around on his travels. And the point, as usual, is his subjects’ extreme beliefs. The formula makes for entertaining reading.

Occasionally, though, I wished that he had tried a little harder: Too often, his reporting consists of interviews with eccentrics spouting nonsense. But is there actually a “madness industry,” a loose collection of professionals with cynical or mercenary aims? By and large, are they helping or hurting people? Ronson is least effective when dealing with issues of real import, like the over-diagnosing of mental disorders in children or the shenanigans of pharmaceutical companies.

Still, at its best, his writing is simultaneously unnerving and extremely funny. For all my complaints, I can pay “The Psychopath Test” the highest compliment. When the book arrived in the mail, I intended to glance through it. Instead, I read it in one sitting that was equal parts disturbed and delightful.

Crazy Is as Crazy Does