Picasso’s Muse and Warhol’s, Too 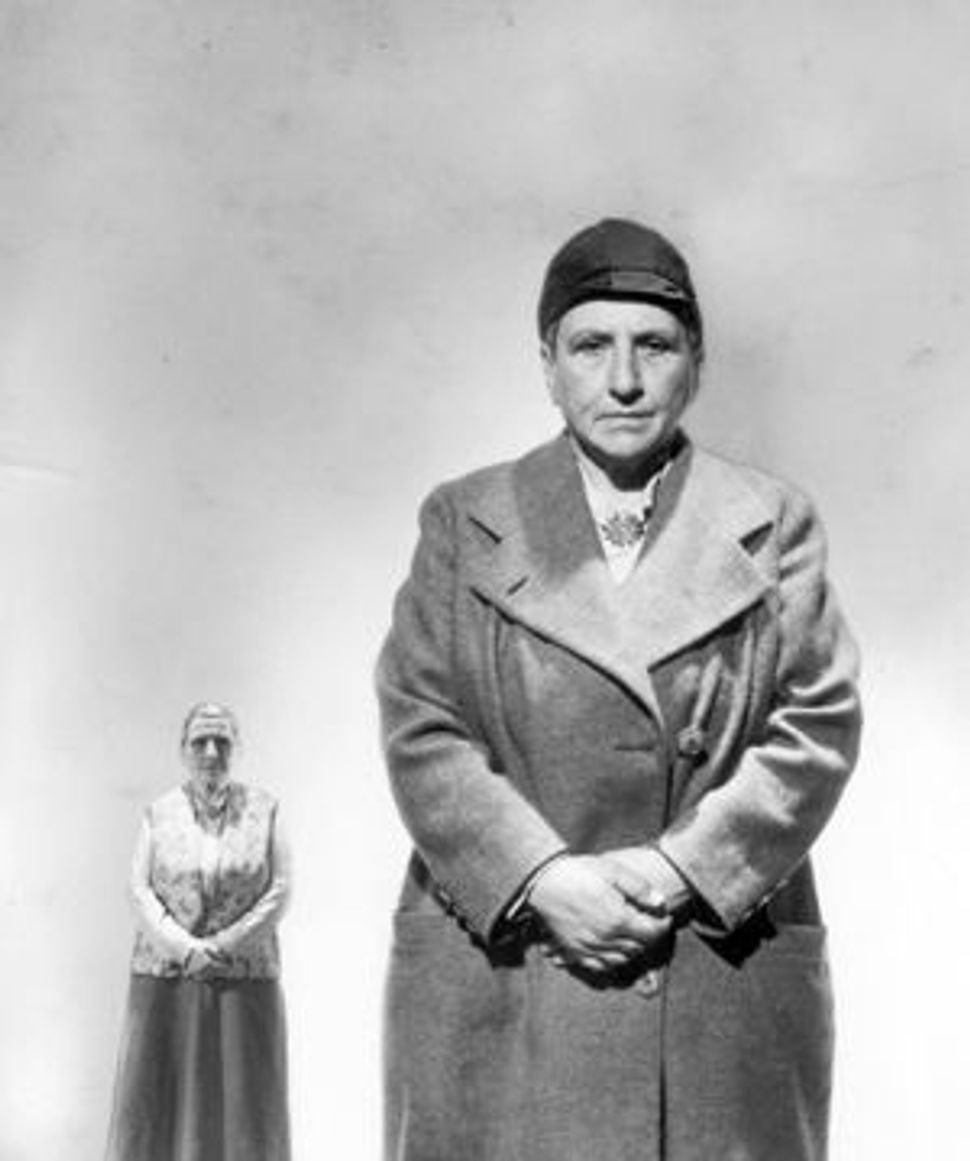 Towering Stature: In this photograph by Cecil Beaton, Stein towers over herself as if her epic stature is too great to be contained in the frame. Image by Cecil Beaton Studio Archive, Sotheby?s 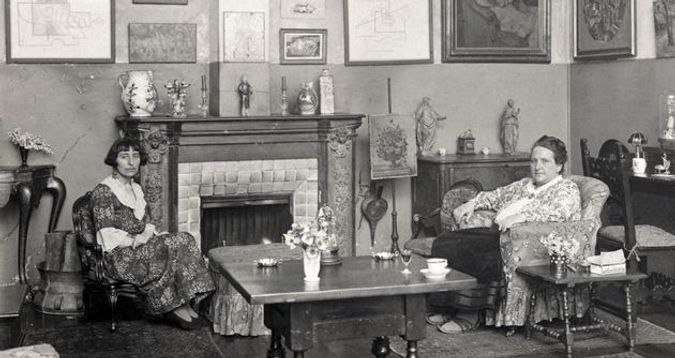 Gertrude Stein and Alice B. Toklas Image by Getty Images

Before Gertrude Stein distinguished herself as an expatriate American writer and patron of artists in Paris, she spent some of her childhood in California, where San Francisco’s Contemporary Jewish Museum is now paying tribute to her. “Seeing Gertrude Stein: Five Stories,” an exhibition of photographs, paintings and sculptures, focuses on Stein’s personal life — her friendships, her celebrity and legacy — more than on her poetry or novels.

The avant-garde writer became widely known in America after the 1933 publication of “The Autobiography of Alice B. Toklas,” which, despite the misleading title, Stein wrote herself, about life with her lesbian partner, Toklas. Additional favorable attention followed the 1934 Broadway opening of her antic opera, “Four Saints in Three Acts,” with music by Virgil Thomson and choreography by Frederick Ashton.

Stein’s success as a writer in America was preceded by education at Radcliffe College and years of residence in Paris. She became friends with Matisse, Picasso and other artists whose paintings Gertrude and her brother Leo could afford to buy, thanks to profits from their family’s San Francisco streetcar investments.

It is tempting to regard Stein herself as a visual artist after seeing this exhibit. For her, seeing and writing were inseparable arts; she sketched portraits of people and objects through words, and said, quite simply, “I write what I see.” Audiotapes of Stein reading some of her word portraits aloud can be heard in the San Francisco show. Toklas once boasted that her partner had “written portraits of practically everyone she has known…. The portrait of Picasso was something to hear.” 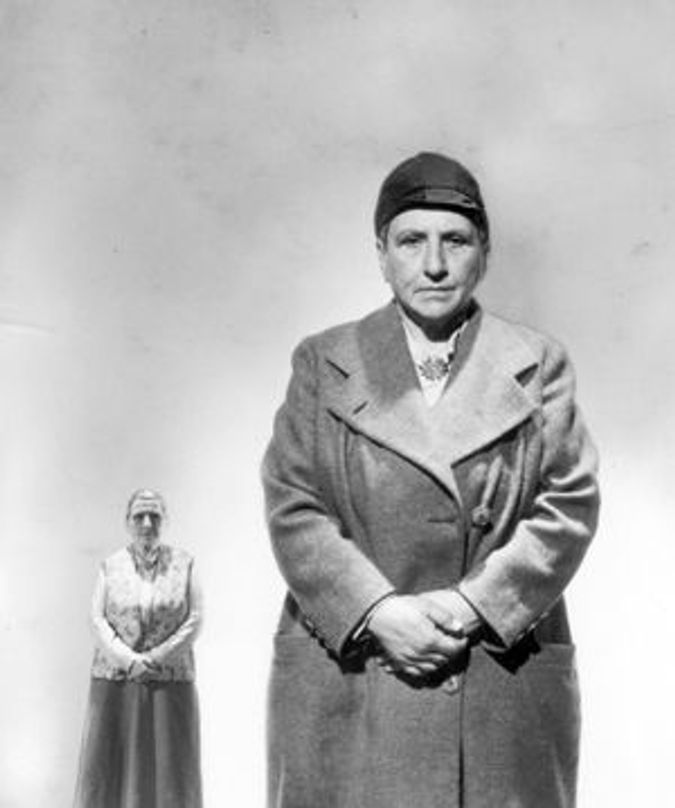 Towering Stature: In this photograph by Cecil Beaton, Stein towers over herself as if her epic stature is too great to be contained in the frame. Image by Cecil Beaton Studio Archive, Sotheby?s

Painters in Paris reciprocated with portraits of Stein. Picasso was the first artist to ask her to pose for him, and she prominently displayed the resulting portrait in her apartment. While not traditionally attractive, Stein’s rotund, mannish appearance became desirable in the art world; after Picasso portrayed her, others reverentially painted, photographed and sculpted his new friend. Jacques Lipchitz described Stein as a “massive inscrutable Buddha,” and his bronze sculpture of her confirms the observation, as does a bronze by Jo Davidson. Other artists render Stein as a modern Roman emperor, complete with Caesar’s close-cropped hair and magisterial gaze. Her artistic empire stretched from the apartment salon in Paris to a country house in Southern France, settings where Stein was frequently photographed by Man Ray, Carl Van Vechten and Cecil Beaton.

A remarkable photograph by Beaton shows two Steins: One stands in the distance; another is closer and looms large, as if the subject’s epic stature is too great to be contained in the frame. A label for the photomontage asserts: “Stein is married to herself… the imperial Stein to the lesbian Stein.” Beaton’s portrait of self-love, and other non-realistic, abstract representations of the avant-garde writer, recalls her own tendency to compose verbal equivalents of Impressionism, Cubism and collage art in stories and plays.

Stein turned part of her Paris apartment into a gallery, where artists could see their own works on display and, in some cases, even add to the collection by creating on site. The apartment housed two Louis XIV chairs with upholstery based on Picasso’s designs, and also displayed extraordinary wallpaper, which the Contemporary Jewish Museum has replicated on one large wall so that so visitors can enjoy the decorative élan of its design, featuring dozens of pairs of white pigeons. Those who know Stein’s opera librettos may recall a lyric about “pigeons in the grass, alas”; here, the birds know only a blue sky.

The pigeon-covered wallpaper served as a backdrop for Stein’s own de facto performance art — self-presentation, with Toklas, in scenes of domestic life. She may not have known that these scenes would someday be framed and shown in museums, but at the very least, when posing for gifted photographers like Man Ray and Beaton, the couple must have been aware their portraits would appear in high-fashion journals, and be seen around the world in print. In these meticulously composed domestic scenes, the apartment becomes a stage. Toklas costumes herself in traditionally feminine clothing, unlike Stein, and sits farther away from the camera, as a reserved wife might sit in a picture with her husband. But this is no ordinary couple, as both parties knew; and the visual documents of their life now can be appreciated as harbingers of today’s celebrated same-sex marriages, especially in San Francisco.

Stein’s legacy lives on within the art world as the writer continues to be portrayed by painters and sculptors long after her passing. Red Grooms parodies Cubist sculpture as he constructs a 3-D paper cutout of Stein seated in a brightly colored 3-D paper armchair. Donald Evans’s postage stamps, with Stein’s poetry inscribed on them, deserve to be in art collections as well as stamp collections. Andy Warhol transforms the face on Stein’s French visa into a silkscreen portrait that was originally part of a series honoring 10 prominent Jews. Deborah Kass creates a feminist variant on Warhol’s style, with a multiple-image portrait of Stein, titled: “Let Us Now Praise Famous Women #3.”

Warhol’s silkscreen is one of few on display that relate to her Jewishness. Stein was born to an American Jewish family, but art and literature, rather than traditional Judaism, became her religion. During World War II, Stein and Toklas stayed in German-occupied France and avoided persecution when other Jews and homosexuals were being arrested. A September 1944 wire service report on display reads: “Gertrude Stein Safe, Safe, Is Safe”; and indeed, she and Toklas remained surprisingly — and suspiciously — safe in Southern France throughout the war. The couple may have owed their wartime safety to Bernard Fay, an admirer and right-wing collaborator arrested after Germany’s defeat. Stein’s wartime association with Fay, her politics and her Judaism all remain disappointingly under-explored.

Stein’s religion may be most visible in filmed excerpts from “Four Saints in Three Acts,” an opera that consecrates saints through word games. Speech is separated from its usual meaning in banter about fish, Teresa of Avila and pigeons — call it pigeon English — set to music and sung. In the museum’s film of the 1934 premiere, African-American performers garbed in glittery white saint and angel costumes move through classical ballet, swing and gospel motifs against a backdrop of cellophane palm trees. More recent film sequences of the Joffrey Ballet and the Mark Morris Dance Group are tame by comparison to the startling airy frolic that Ashton choreographed. Several beautiful posters for New York’s The Living Theatre hint at its innovative staging of Stein’s texts, “Ladies’ Voices” and “Dr. Faustus Lights the Lights.”

In retrospect, Stein’s creation of word portraits can be seen as part of a much larger visual arts project that now goes on without her physical presence; her influence surfaces in the innovative, highly visual stage productions of Robert Wilson, which employ her texts and newer but comparable scenarios, and in works like the Merce Cunningham Dance Company’s recent “Roaratorio” with its John Cage score incorporating words and phrases that recall Stein’s dissociative prose. “A writer does not write with his ears or his mouth, he writes with his eyes,” she wrote in 1946. Her writing of prose portraits and stage librettos differed from Picasso’s portrait painting and Warhol’s, at least in its medium. But Stein shared with these painters a dedication to the act of seeing things anew through art. It is fitting that she should end up in their company on museum walls, artfully posed like an emperor of the avant-garde.

Joel Schechter is a professor of theater at San Francisco State University and writes a column for Jewish Currents magazine.

Picasso’s Muse and Warhol’s, Too