A Different Drum: How a Modern Orthodox 23-Year-Old Danced Her Way Into a Unique Spotlight 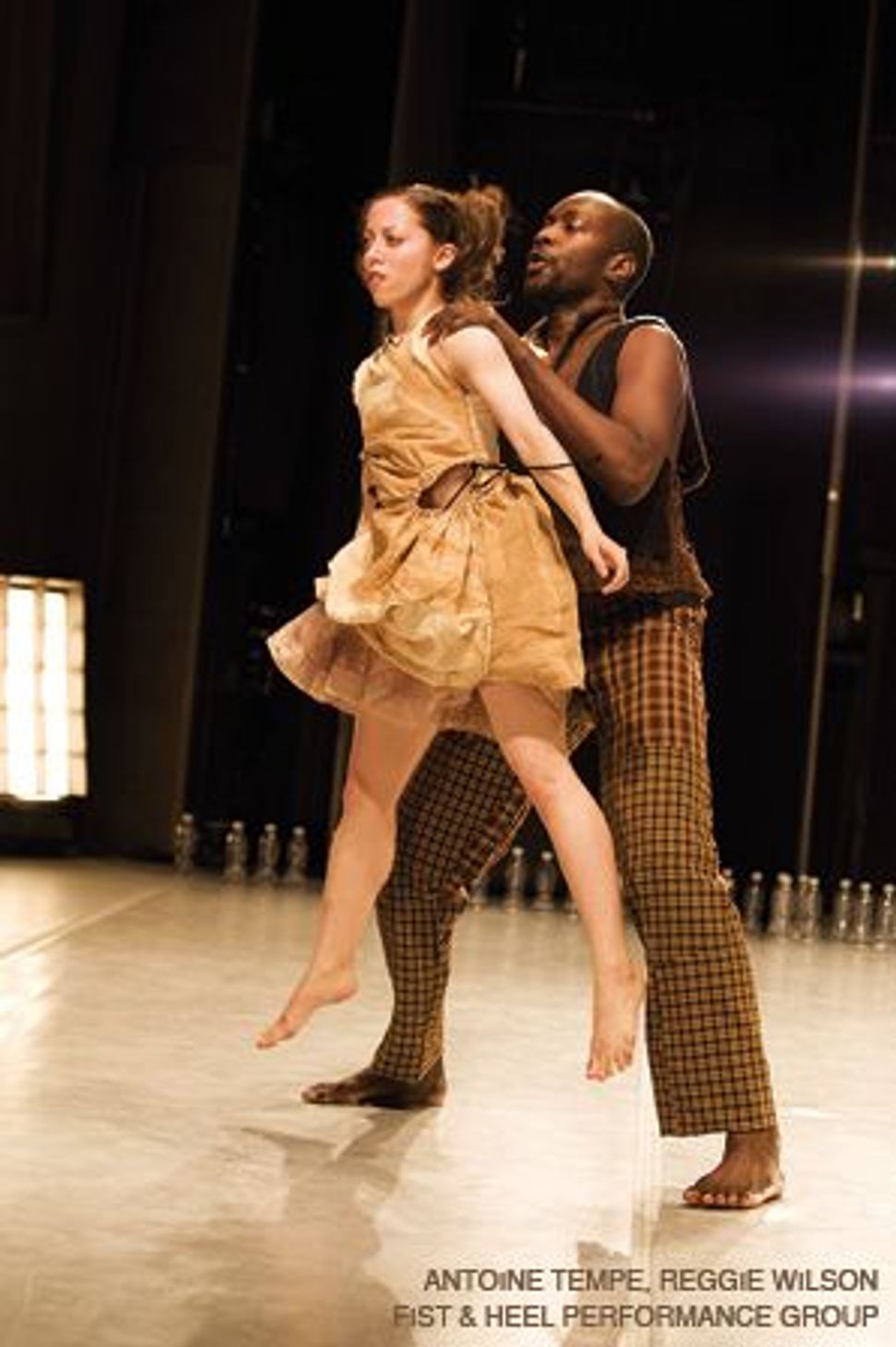 One of this year’s arts fellows at Drisha, a Torah study center for women that is located on New York’s City’s Upper West Side, is a 23-year-old Barnard College graduate named Anna Schon. As a product of the Modern Orthodox day schools, she blends into the student body easily. 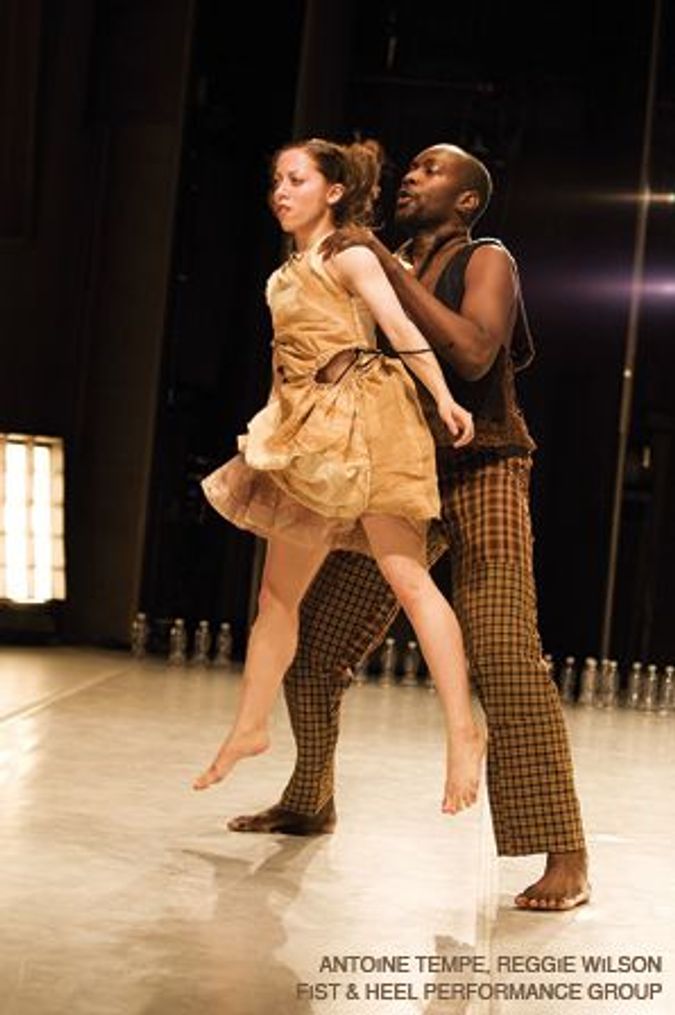 But when she is not studying the Prophets or the talmudic laws about transactions in the tractate Bava Kama, Schon leads a very different kind of life. She is an active member of four New York dance companies — an unusual profession for an observant Jew, since many performances take place on the Sabbath, and since, according to the laws of tsniut (modesty), dancing with or performing before unrelated members of the opposite sex is not permitted.

Although Schon struggles with these competing impulses — her passion for dance and her commitment to traditional Judaism — this has not deterred her from embracing both worlds wholeheartedly. In fact, this year she was accepted into (and is the only white dancer in) the acclaimed Reggie Wilson/Fist & Heel Performance Group, a Brooklyn-based company that blends contemporary dance with African traditions, the blues and the gospel culture of the Deep South. New York Times dance critic Anna Kisselgoff has declared the company’s performance “stimulating and refreshing,” while Tobi Tobias of The Village Voice called one of its shows “infectiously joyous.”

Schon’s love of dance began early. Her mother, a graphic artist, recalled that “at age 2, she was already dancing to ‘Carmen,’” the French opera by Georges Bizet. Her father, a molecular biologist, loved classical music so much that he kept the stereo on daily. But like most parents, her mom and dad knew that passing on a love of the arts to children wasn’t a sure thing. Schon’s parents enrolled her in a ballet class when she was 4, but they now admit that they assumed she would eventually lose interest.

But several years later, as a fourth grader at the Bronx’s Salanter Akiba Riverdale Academy, she announced that she wanted to go to “real” ballet school and perform “The Nutcracker” at Lincoln Center. Her parents researched the possibilities, but upon learning that rehearsals and performances took place on the Sabbath, they decided it would not work for her. “She could have gone on to become a professional dancer,” her mother affirmed, “but we wanted Shabbat to be Shabbat, and we thought it was important for her to have a normal childhood.”

Instead, Schon enrolled in Studio Maestro, a rigorous after-school ballet academy, even though the schedule occasionally conflicted with her classes at SAR. “My eighth grade science teacher let me leave early on Tuesdays, because I was a good student,” Schon recalled in an interview with the Forward. “I was in such a rush, I had to put on my leotards and tights in the car.”

Schon’s two worlds came to a head when she started applying to high schools. At the admissions interview at one high school for Orthodox girls, the rabbi advised her that she would need to give up dancing in order to attend the school. She refused — though surprisingly, she got in anyway. She also got into the Fiorello H. LaGuardia High School of Music & Art and the Performing Arts, and Ramaz, a Modern Orthodox Jewish school on the Upper East Side. After agonizing for weeks, Schon decided that Judaism took precedence, and so she chose Ramaz.

“I figured I’d find a way to continue dancing. But I had such a heavy workload, I had no time to dance,” she said. “I was miserable.”

Several years later, while taking classes in Barnard’s dance department, Schon became enthralled with African dance. “I realized that when I do ballet or modern, I’m very conscious of my technique; it feels like a performance,” Schon explained. “But when I do the African dances to the beat of the drums, I’m transported to a desert alone somewhere. It’s a very spiritual experience.” She spent the following semester in Cape Town, South Africa, learning African dance traditions.

During her senior year, Schon was one of 12 women chosen to dance in a piece created by Reggie Wilson, the celebrated black choreographer and founder of Fist & Heel. She felt a kinship with Wilson, who, ironically, once had danced with Ohad Naharin, the Israeli choreographer who now heads the Batsheva Dance Company. In fact, Wilson told her that there was a time when he had considered moving to Israel.

After garnering praise for several performances in African dance, Schon asked Wilson if she could join Fist & Heel. He didn’t reply, and a week later she asked again. Wilson looked at her squarely and deadpanned: “You know, Anna, you’re white.” But after Schon described her experiences studying dance in South Africa, and her own spiritual struggle to remain both a dancer and a religious Jew, Wilson was impressed.

“We have dancers from Senegal, Trinidad, Jamaica,” Wilson told the Forward, “and many of them recognize that they’re working outside their strict religious tradition. So Anna fits right in there.”

This past May, Schon had her first performance with Fist & Heel at a venue on the Upper East Side of Manhattan. Since it was Friday night, she had to go home, to the Upper West Side, by foot. When she arrived, close to 11 p.m., her friends were waiting with Sabbath dinner.

“I do whatever I can to keep Shabbat,” she explained. “My bookkeeper pays me for the weekday rehearsals instead of performances, and on Shabbat I ask one of the dancers to put the makeup on me.”

On the matter of modesty, Schon admitted: “Well, I guess the only way I can keep on dancing is to ignore certain things. It’s similar to someone using a Sabbath clock to watch a football game on Sukkot. I used to think I would be able to settle this conflict, but now I see that I’m just going to be in flux my whole life. Maybe the reason people like my dancing is because I bring that struggle to the table when I dance.”

“The truth is, I just don’t connect to God through davening as much as I do through dancing,” she remarked, adding, “There must be a reason why He made me this way.”

Rukhl Schaechter is a staff writer and editor at the Forverts, from which this article was adapted.

A Different Drum: How a Modern Orthodox 23-Year-Old Danced Her Way Into a Unique Spotlight