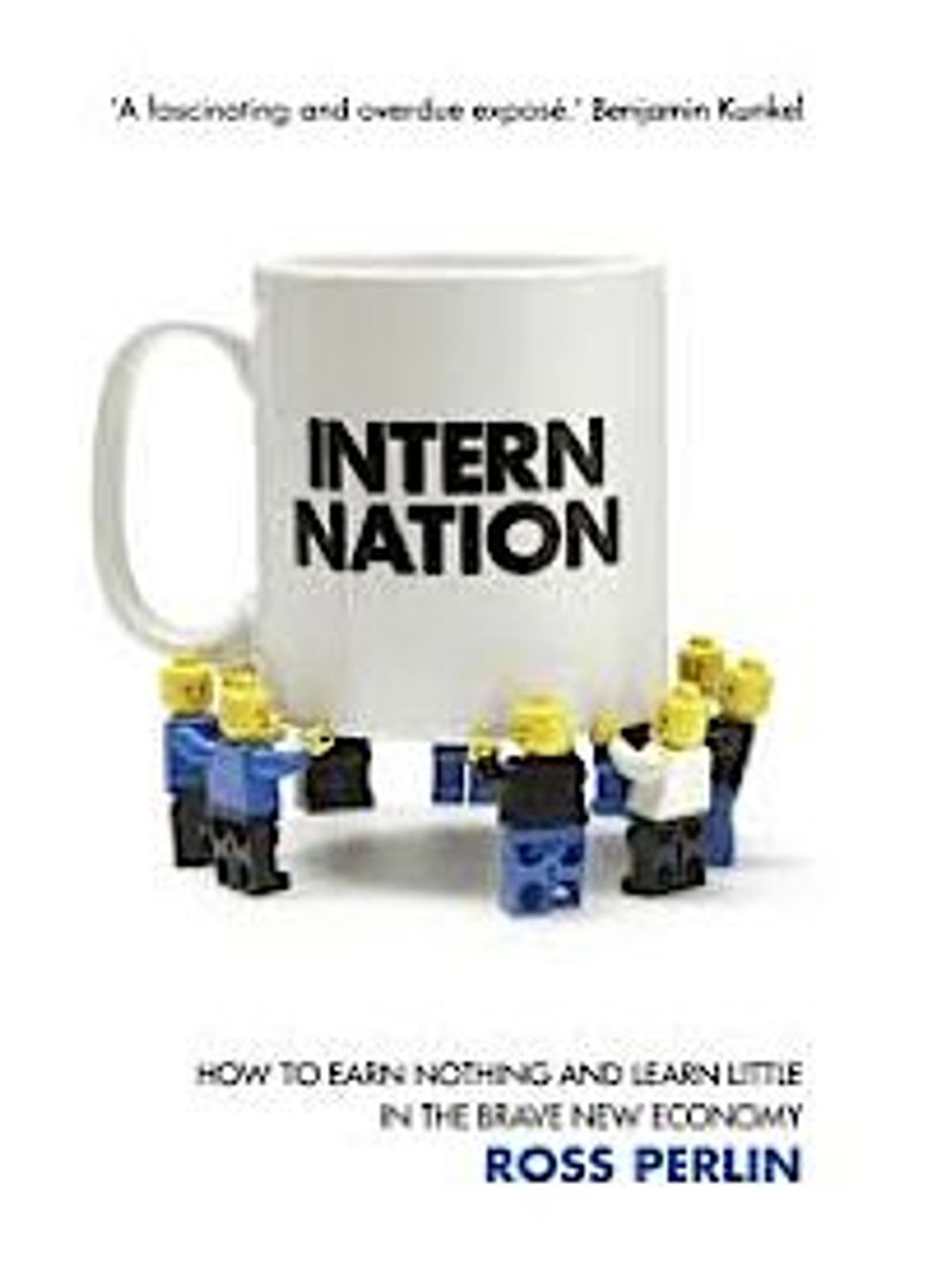 Intern Nation: How to Earn Nothing and Learn Little in the Brave New Economy
By Ross Perlin
Verso, 2011, $22.95

Every year, hundreds of thousands of interns in the U.S. work without pay or for less than minimum wage. Many of these unpaid or underpaid internships are at for-profit companies and closely resemble regular work: thousands upon thousands of labor violations each year, hidden in plain sight. An Intern Bridge survey, involving 42,000 students at 400 universities, found that 18 percent of the respondents had received neither pay nor academic credit for their internships, a likely indication that these positions were illegal. In certain for-profit industries — fashion, publishing, entertainment, journalism, to name a few — demanding unpaid internships dominate, with illegal situations possibly constituting a majority of all available opportunities. 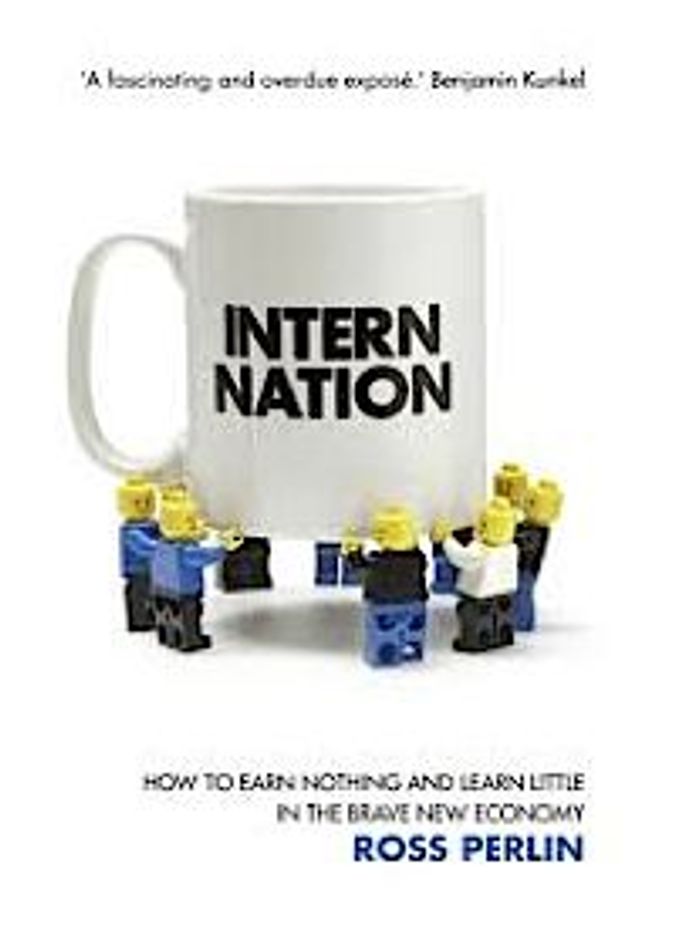 The broad outlines of a broken paradigm are clear. Unless substantial training is involved, an intern is considered to be an employee, however temporary or inexperienced, and entitled to minimum wage and other protections under the Fair Labor Standards Act (FLSA), the central piece of federal legislation that addresses the rights of American workers. It doesn’t matter whether it’s at a blue-chip company or a small business, whether it’s full-time or one day a week, whether the goal is academic credit or a midlife career change — by law, there are very few situations where you can ask someone to do real work for free.

And there are good reasons why that’s the law. Working for free is a way of radically underbidding the competition and prompting “a race to the bottom” — after all, why should an employer pay for something ever again once it can be had for free? Every time young people scramble for an unpaid position, they reinforce the flawed perception that certain kinds of work have lost all value. Whether or not any given individual is happy to make this trade-off, the decision has consequences for everyone else. For an inexact but suggestive comparison, imagine if Chinese carmakers, keen to capture market share and subsidized by Beijing, started offering their cars to American customers for free. This would be considered illegal for more or less the same reason: Using an unfair advantage to drop the price to zero both distorts markets and destroys livelihoods.

Yet illegal internships are spreading openly and inexorably; they have become a social norm propagated by employers, schools, parents, and interns themselves. The publisher of a storied California newspaper attempts to replace his reporting staff with full-time, unpaid interns, recruited from top journalism schools. Wall Street firms, hedge funds, and asset management companies, sensing students’ desperation in tough economic times, offer unpaid brokerage internships, involving financial analysis and investment research as well as secretarial work. Start-ups pencil interns into their business plans as a cost-saving measure, with empty promises of a distant salary or a stock option bonanza. Nearly every day, in every major city, employers post ads for illegal internships on Craigslist, Monster.com, and countless college job boards, describing serious work roles for qualified individuals, promising no pay and little or no training.

The cheerful, little-noticed manipulation of 20-somethings constitutes a serious violation of law and basic ethics. Having inured ourselves to their informal, banal character, we make excuses for the unregulated and irrepressible spread of internships, to the erosion of the concept of work. The mutual consent of employer and intern should not be mistaken for proof that all is well or legal. After all, most sweatshop workers also consent to their toil, for lack of a better option. We tend to assume, reasonably, that something so widespread, so openly touted by respectable institutions, must be legitimate. Entire industries rely unabashedly on this source of free or cheap labor; an increasing number of placement firms are building multimillion-dollar businesses around selling such internships; thousands of educational institutions lend them credibility and resources. Why is no one blowing the whistle on illegal internships?

Michael Tracy, an employment lawyer who has written about internship law, succinctly states the issue: “The law is not widely known.” For a long time, this was true of students and parents, university personnel and employers alike — but there was nothing accidental about this blind spot. A quick Internet search reveals the basic criteria that make an internship legal or illegal, information that media outlets and bloggers have now published thousands of times. Still, virtually no one mentions the law in conversation or takes it very seriously. Employers, schools, and professional associations benefit from the current system; parents and students largely accept it and bear the costs.

Interns themselves do communicate, sometimes feverishly and effectively, about which internships are revelatory or useless, fun or mindnumbing — now increasingly through dedicated internship rating websites — but there’s very little discussion of whether many internships are legitimate in the first place. According to Tracy, “The problem is that there are ‘willing victims.’” Yesterday’s interns need their former employers as references or contacts, and today’s interns trade their half-understood rights for a résumé boost. Some parents, raised in an era when work entailed pay, try to impart this old-fashioned idea to their teenagers and 20-somethings, but many also encourage and badger their progeny into getting a leg-up on the competition, no matter what. Indeed, parents are often the ones indulgently but misguidedly underwriting illegal internships, in effect subsidizing the companies that reap free labor.

And it’s not just about minimum wage. A host of other, related rights are at stake with illegal internships, from overtime to sick days to basic workplace rights. With their rights under the FLSA ignored and unenforced, interns face a second, equally cruel injustice: Those working without pay are also left without legal standing and effectively “in legal limbo” — unable to bring lawsuits against employers, internship programs, or colleges. Our youngest workers, least likely to be wise in the ways of the workplace, effectively have no legal voice; they are considered no different from bystanders who just happen to be holding down a cubicle. Those subject to sexual harassment or racial discrimination have no legal recourse. No fair hiring practices pertain. In the world of internships, anything goes — inhumane employment practices, right out of the 19th century, are resurfacing in 21st-century office parks and skyscrapers.

Ross Perlin is the China correspondent for the Forverts and a researcher at the Himalayan Languages Project. His writing has appeared in The New York Times, Time magazine and Lapham’s Quarterly, among other places.

Watch an interview with Ross Perlin on the Forverts Video Channel: