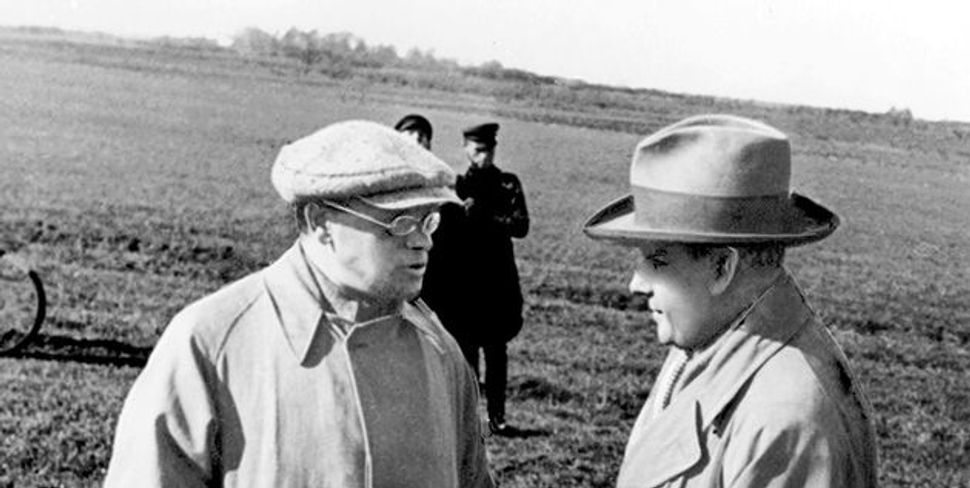 Paradise or Hell?: Two makers of modern Odessa, Isaac Babel (left) and Sergei Eisenstein, ca. 1935. Image by From ‘ODESSA: Genius and Death in a City of Dreams’ by Charles King courtesy of W.W. Norton & Co.

“I just read, in [the Web site of] Jewish Ideas Daily, a review of a book about the history of Odessa. In it were mentioned two contrasting Jewish views of that city as expressed in the Yiddish sayings, lebn vi got in Odes, ‘to live like God in Odessa, and zibn mayl arum Odes brent dos gehenem, ‘the fires of hell burn for 7 miles around Odessa.’ Although I wasn’t familiar with either of these, I do know the Yiddish saying lebn vi got in Frankraykh, ‘to live like God in France.’ What can you tell me about the origins of these expressions?”

Actually, were he to read it again, Mr. Cohen would see that the review in question, written by Drew University professor Allan Nadler about Georgetown University professor Charles King’s new study, “Odessa: Genius and Death in a City of Dreams,” tells him most of what he wants to know. Since few of you will get to read it even once, however, I’ll take the liberty of going over some of the same ground here.

“To live like God in Odessa” and “The fires of hell burn for 7 miles around Odessa,” both of which originated among Yiddish speakers in the mid-to-late 19th century, were complementary as much as opposed sayings. They disagreed, not about the kind of city that 19th-century Odessa was, but in their assessment of it: While a paradise, in the eyes of some, for Jews pursuing lives of self-fulfillment untrammeled by the conventional strictures of Jewish and Russian society, it was a hotbed of depravity, in the eyes of others, for Jews committed to their traditions. Whether expressing envy of Odessan life or revulsion from it, both sayings referred to the same boisterous port city that boasted more freedom, economic opportunity and ethnic diversity, and less religious orthodoxy, autocracy and anti-Semitism, than anywhere else in the Russia of its time.

Odessa owed its uniqueness to several factors: Its newness (it was founded on the shores of the Black Sea by Catherine the Great in 1794), unencumbered by the heavy hand of the past; its extremely varied population, which included, besides Russians and Ukrainians, large numbers of Jews, Greeks, Turks, Armenians, Georgians, Moldavians and Azerbaijanis, so that no single group was a majority or dominated the others; its role as Russia’s largest commercial port, where it provided the freewheeling amenities demanded by sailors, faced outward to the world rather than inward to the Russian land mass, and facilitated the emergence of a nouveau riche class of traders and businessmen, and finally, its relatively (Odessa is no Miami) warm and sunny climate compared with the rest of Russia, which gave life there more of an outdoor, Mediterranean-style coloring.

Jews who were native to Odessa tended to be patriots of it. The great Zionist politician and gifted author Vladimir Jabotinsky wrote of the city in his memoirs, in which he favorably contrasted growing up there as a Jew with doing so elsewhere in Russia:

“Our lives were free and easy. Odessa had an unwritten philosophy of its own: If you know where your next meal is coming from, why give a hoot about anything?… It was a likable, fun-loving, thieving town.”

And, commenting on his use of the Yiddish word gneyvishe, “thieving,” he added:

“Ganef in Yiddish has a deeper meaning [than “thief”]…. It refers to someone shrewd and quick-witted, fast on his feet, a very devil of a fellow, full of imagination and abandon, laughing at the top of his voice, shouting at the top of his lungs, endlessly exaggerating, making you dizzy with his daftness, a schemer and a saboteur, a gambler and a jobber, all in one.”

And here is Sholom Aleichem’s Menachem Mendel, a daft and dizzying fellow himself, writing home to his wife from Odessa, where he has gone to make his fortune and will end up losing his shirt:

Words fail me in describing the grandeur and beauty of the city, the fine character of its inhabitants, and the wonderful opportunities that exist here. Just imagine: I take my walking stick and venture out on Greek Street, as the place where Jews do business is called, and there are twenty thousand different things to deal in. If I want wheat, there’s wheat. If I feel like wool, there’s wool. If I’m in the mood for bran, there’s bran. Flour, salt, feathers, raisins, jute, herring — name it and you have it in Odessa.

Odessa was a town where even God could have a good time — or, if you prefer, where anyone having God’s means and expense account could have a good time, too. (The expression “lebn vi got in Odes” was taken from the earlier “lebn vi got in Frankraykh,” which entered Yiddish from early 19th-century German.) But it was also a town whose cafes, taverns, notorious brothels, wildly speculative stock exchange, dubious get-rich-quick schemes and Jewish gangsters who were written about by another native Odessan, Isaac Babel, made it Sin City for more traditional Jews. Nor could you say you hadn’t been warned, because the fires of hell were already burning miles before you reached it.