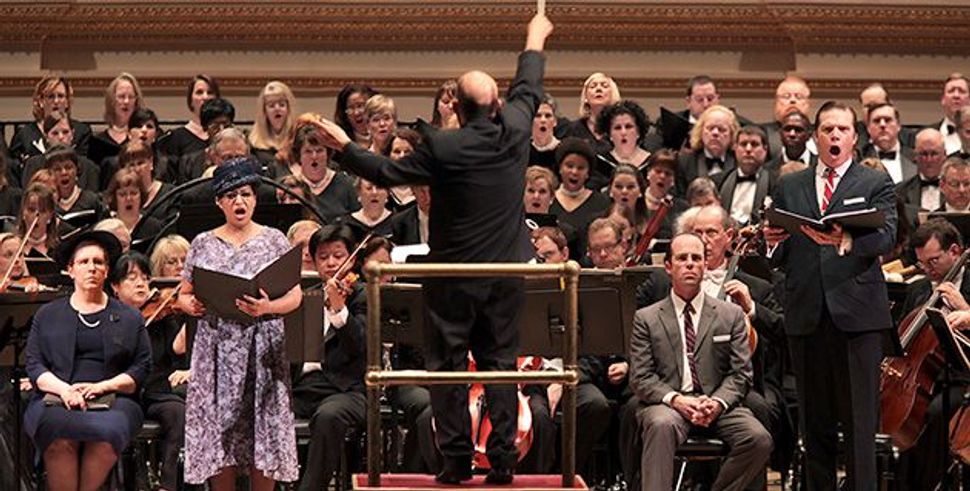 Can an oratorio about politics rise above the artistic level of occasional piece or mere propaganda? The question came to mind at New York City’s Carnegie Hall before I heard Jaap van Zweden masterfully conduct the Dallas Symphony Orchestra, its 70-voice chorus and four soloists in the May 11 New York premiere of a new 80-minute political oratorio, “August 4, 1964.” The oratorio recalls the day that two very different events stirred national outrage: the false report of an attack on American ships in the Gulf of Tonkin — which plunged America into the disastrous war in Vietnam — and the discovery in Mississippi of the bodies of three murdered civil rights workers: Andrew Goodman, Michael Schwerner (both young Jewish men from New York) and James Chaney (a black Freedom Movement activist from nearby Meridian).

When the Dallas Symphony Orchestra commissioned Pulitzer Prize-winning composer Steven Stucky to compose something grand to celebrate the centenary of the birth of Lyndon Baines Johnson, they may perhaps have been thinking of something along the lines of Aaron Copland’s rousing “Lincoln Portrait,” a staple of patriotic performances. What they got was something far darker, ambiguous and grandiose. Stucky turned to noted librettist Gene Scheer, who fixed on the astonishing historical coincidence that these two milestones in American history happened on a single day in Johnson’s presidency, August 4, 1964.

For the 1942 Lincoln work, Copland cobbled together the inspirational words of Abraham Lincoln (for example, “As I would not be a slave, so I would not be a master”) into a narration surrounded with a variety of rhetorical, nostalgic and dramatic musical flourishes. Then he stitched together the quotations with incantatory connecting phrases for the narrator, like: “That is what Lincoln said. That is what Abraham Lincoln said” — more or less in the same manner as Hebrew prayers always preface references from prior sources with the incantatory word “shenemar” (“as it is said”) to underline the references’ legitimacy and provenance.

For “August 4, 1964,” Scheer also wove together a tapestry of quotations, although from many sources. Unlike Copland, however, Stucky decided that everything should be sung rather than narrated. Surprisingly, Stucky — who wrote the first major book in English on the Polish avant-garde master composer Witold Lutoslawski — chose to write extremely conservative music in the oratorio, more in keeping with the pre-World War II era than with either the 1960s or the present day. There are tiny snippets of recognizable tunes throughout the oratorio — most prominently, the anthem of the civil rights movement, “We Shall Overcome” — though the melody never quite completes the syllable “-come” and therefore has no closure, even in the most blazing outbursts from the brass. Other than such melodic references, however, there is little that is particularly American about the music.

Unifying the work were the repeated entries of the superb Dallas Symphony Chorus, quietly singing Stephen Spender’s “I think continually on those who were truly great,” a poem that, evidently, Goodman’s mother placed on the wall of her apartment after Johnson personally telephoned her to inform her of her son’s death. Lines from Schwerner’s application to work for the Congress of Racial Equality were also tossed between overlapping male voices of the choir, conveying how his idealism represented so many civil rights workers in the struggle.

The four solo singers all embodied particular people, and the chosen words created their own visceral scenery so convincingly that their 1960s period costumes seemed superfluous. Chaney’s mother (soprano Indira Mahajan) sang a story that her son knew well, of her grandfather’s murder by whites jealous of the success of the business he’d created with his own hands. Goodman’s mother (mezzo-soprano Kristine Jepson) sang the last letter that Andrew wrote, about how “wonderful” the people and the town were.

The high-strung Robert McNamara was, despite a few rough patches, well conveyed by tenor Vale Rideout, who sang tortuously, sometimes beyond his range, about the confusing communications from Vietnam. In the end, McNamara chose to ignore the most significant of these, and he damns himself late in life with his haunted realization: “Had we known… it was a tragic mistake.” Baritone Rod Gilfry (singing Johnson) attempted a Texas accent, in words like the pronoun “I” as “ah,” but did not dare to sing the word “Negro” the way Johnson pronounced it. His stentorian singing of the presidential address “We Shall Overcome” packed a wallop, after he began it with a frog in his throat. Oddly, the White House music in this score nearly always mimics the breathlessly quick passage-work of colorful and rapidly intersecting phrases associated with Adams’s “Nixon in China.”

Whether this oratorio will stand the test of time or be of interest to non-American audiences remains to be seen. The facts at the heart of this work still roil here: Vietnam and the civil rights murders are national wounds. “August 4, 1964” does not pander or propagandize. Rather, the music concerns itself more with dramatizing the text than with soaring as a work of music in its own right. “Elegy,” the one purely instrumental movement at the heart of the work, rambles more than it transfigures. What the combination of music and text does achieve, admirably, is to make these grave wounds to the American psyche palpably present.

Raphael Mostel is a composer based in New York City. He often covers the arts for the Forward.