The Mississippi Floods: Punishment From an Angry God? 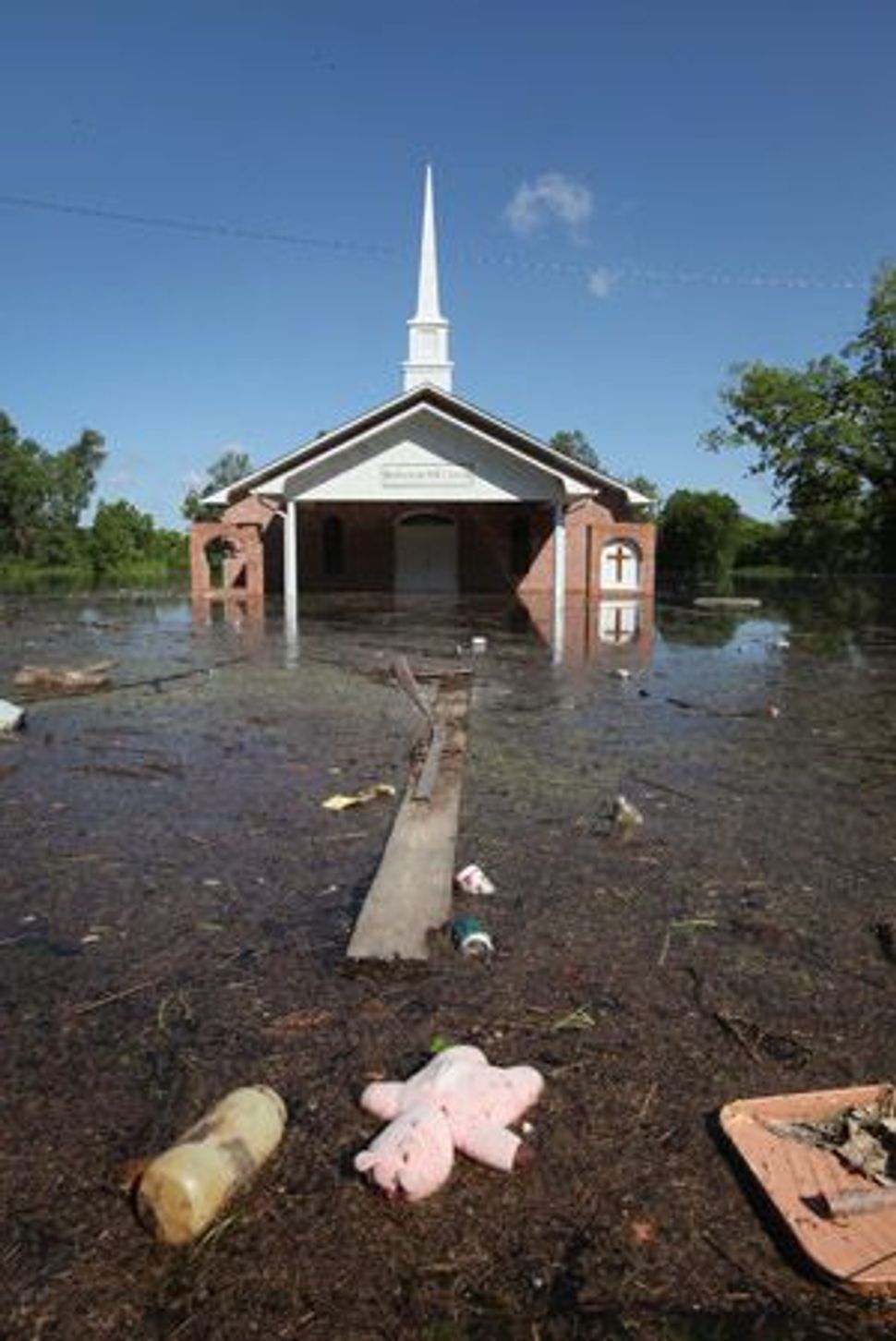 Floodwaters High: Water surrounds the Bethlehem MB Church in the King?s Community neighborhood on May 17, in Vicksburg, Miss. Image by Getty Images

Is God punishing the Deep South? In the first half of May, a series of devastating tornadoes ripped through Alabama, and as this article goes to press, swaths of greater Memphis, Tenn., are underwater, and levees are being released all along the Mississippi River. 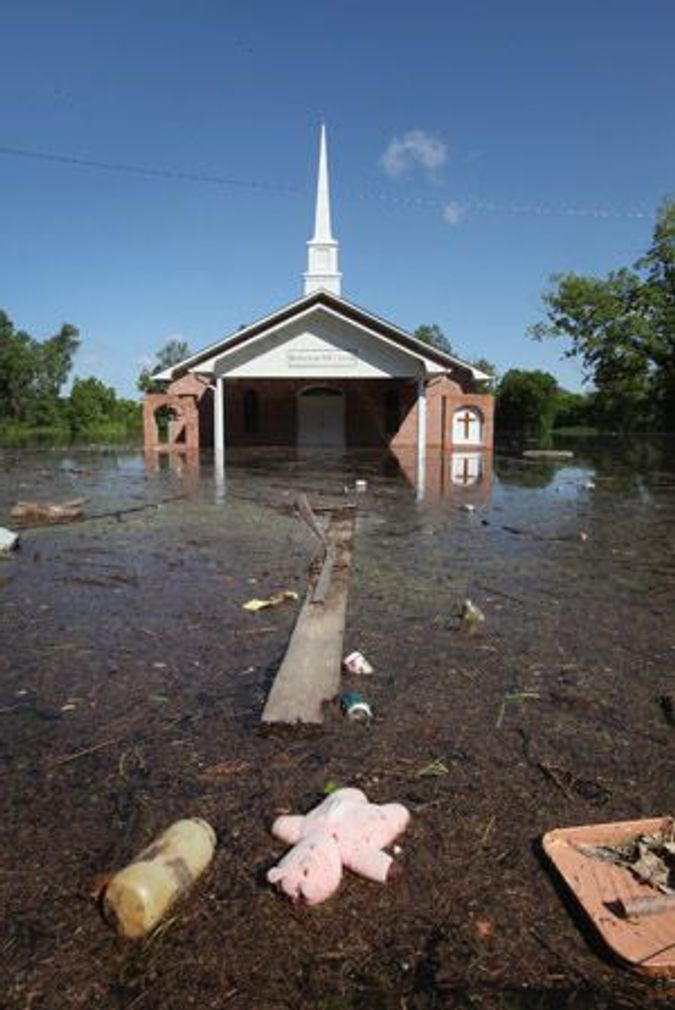 Floodwaters High: Water surrounds the Bethlehem MB Church in the King?s Community neighborhood on May 17, in Vicksburg, Miss. Image by Getty Images

Not surprisingly, the usual voices of theodicy have currently fallen silent. After all, this isn’t New Orleans, Japan, Haiti, Indonesia or northern Israel — all of which were, according to various quacks and/or former chief rabbis of Israel, sinful places deserving of divine wrath, as meted out by earthquakes, tsunamis, hurricanes and wildfires. This is the Bible Belt. If any place should be beloved of God (the right-wing God, that is), this should be it.

Equally unsurprising, those of us on the more progressive end of the religious spectrum are also silent. We’re not rushing to judgment, as our more conservative colleagues usually do. After all, most of us don’t believe in heavenly justice being expressed as meteorology. And even if we did, most of us would hesitate before ascribing a given weather event to the Hand of God.

The reticence — even repulsion — that most of us feel about theologizing based on human tragedy is, I think, a symptom of a wider alienation. All but a tiny fringe of American Jews have given up on theodicy, the branch of theology that deals with how God metes out reward, punishment and justice. We may mouth the words on Rosh Hashanah, but most contemporary Jews (even Orthodox ones) don’t really believe that God punishes wicked individuals and rewards righteous ones. Certainly the ones I know don’t. Rather, they, and we, find ways to finagle traditional dogma. God works in mysterious ways. Justice may happen collectively or over decades — even centuries. And so on.

Let’s face it, though: These explanations are quite different from the clear pronouncements of Deuteronomy — included in the second paragraph of the Sh’ma — that God rewards the good and punishes the bad, in worldly ways and, indeed, with weather events. (“If you faithfully obey the commandments… I will send rain on your land in its season…. [If] you turn away and worship other gods and bow down to them, then the Lord’s anger will burn against you, and he will shut up the heavens so that it will not rain.” Deuteronomy 11:13–17)

Once, we must assume, such beliefs must have provided great comfort and consolation, which is why they took hold for so many centuries. In the face of seemingly random disease, devastation and disorder, theodicy holds forth the promise of meaning and justice. God orders the world, despite its seeming chaos.

But today? God may not be dead, but theodicy is.

The usual explanation for its demise, of course, is the Holocaust. After Auschwitz, some say, theodicy is obscene. How could anyone say that God protects the righteous after the gas chambers?

Yet I don’t think it’s just the Holocaust. Survivors of the horrible massacres of 70, 136, 1096, 1492 and 1648 knew as much unimaginable pain as those of 1945. They, too, saw their worlds turned upside down. Yet in response to such events, they tended to seek comfort from traditional theology — not to cast it aside. After those crises, the pious atoned for their sins and prayed to the righteous judge to exact His revenge.

Such traditional explanations were offered in response to the Holocaust — but only on the fundamentalist fringe. A few ultra-Orthodox rabbis, most notably the late Satmar rebbe, have said that the Holocaust was collective punishment for assimilation. Others said it was necessary for the founding of the State of Israel: Auschwitz was the birth pangs of the birth pangs of the messianic age. In and of themselves, these views are not without precedent. Did innocents suffer? Yes. Was there great evil on the part of the Nazis? Yes. But that was also the case with the Temple destructions in Jerusalem. The theodicy that Jews recite every day as part of the Sh’ma is framed in collective, not individual, terms — and God’s will is expressed through human agents. Nothing new there.

Why, then, do such explanations seem so outrageous, even disgusting? Precisely a tenet of the faith that once provided comfort now inspires rage. Why?

I think most Jews have rejected theodicy, whether in Majdanek or on the Mississippi, not because of facts, but because of values. Even if a judging God could be squared with the Holocaust, we don’t want it to square. Such a God is cruel, vengeful, abusive, distant, cold and authoritarian. And here on Earth, His believers are encouraged to be arrogant, presumptive and callous.

What, after all, is the right response to the floods, tsunamis and earthquakes of recent years? “I told you so”? And what is the spiritual faculty called upon by vengeful theodicy? Guilt? Terror? All of us have such feelings from time to time, but few progressives seek to deify them or to ascribe them qualities of holiness.

At the same time, I come not to bury theodicy, but to call for its resurrection. Progressive religionists err when we consign theodicy to the reactionaries. We strip religion of some of its primary functions: to inspire us to be better people, to provide a “bigger picture” of order behind the surface of disorder, and to connect us to the worlds and communities in which we live.

How does this relate to the news from Louisiana? Well, as it happens, many of these recent extreme weather events are a kind of “punishment” — not in the conservative-theological sense of tit-for-tat justice meted out by an Abusive Father on High, but in the more progressive-theological sense of unforeseen consequences of reckless human actions. As a species, we are reaping what we’ve sown. Climate scientists have said for years that global climate change will lead to more frequent severe weather events, and now those events appear to be here. This isn’t quite the same as Deuteronomy’s Cosmic Cop, but it is a useful reminder of responsibility and causality. We created this situation because of greed and lack of wisdom. And now, here are the consequences.

None of this depends on talk of punishment and sin. This is about actions and consequences — a bit like the Buddhist notion of karma, but without the magical thinking. Let’s translate Deuteronomy 13 into contemporary language: When we turn our back on values like respect, sustainability and responsibility, when we turn toward idols of greed and ignorance, the earth will turn against us. No puppet master behind the scenes, and no need to anthropomorphize or deify Mother Earth herself. Just cause and effect. We were greedy, and here’s the result.

This is a theodicy I could teach to children. There is no such thing as a free lunch. Ignoring a problem does not make it go away. The failure to make difficult choices is, itself, a choice. And what some people do (or don’t do) affects other people — including innocent people, like the recent victims of the tornadoes and floods. We are all connected, and we’re all in this together.

These are the kinds of religious conclusions I’d like to take away from the human tragedies in Tennessee, Alabama and around the globe. While they reject anthropomorphic theodicy that has been buried by science, genocide and the progress of human understanding, they flow from a worthy religious source. They are consonant with a contemporary theology, they teach important lessons and they help human beings in times of crisis understand how actions have consequences.

And finally, they are meant to engender compassion and responsibility rather than the condescension of those who think they know the mind of God. Bad things happen to good people. Sometimes we can’t do anything about them, and oftentimes they make no sense whatsoever. Then again, sometimes there are things we could have done, and still can do. In all cases, our response should be more compassion, more generosity — and, where possible, more determination to prevent such evil from happening again.

The Mississippi Floods: Punishment From an Angry God?