More Than a ‘Footnote’ From Cannes 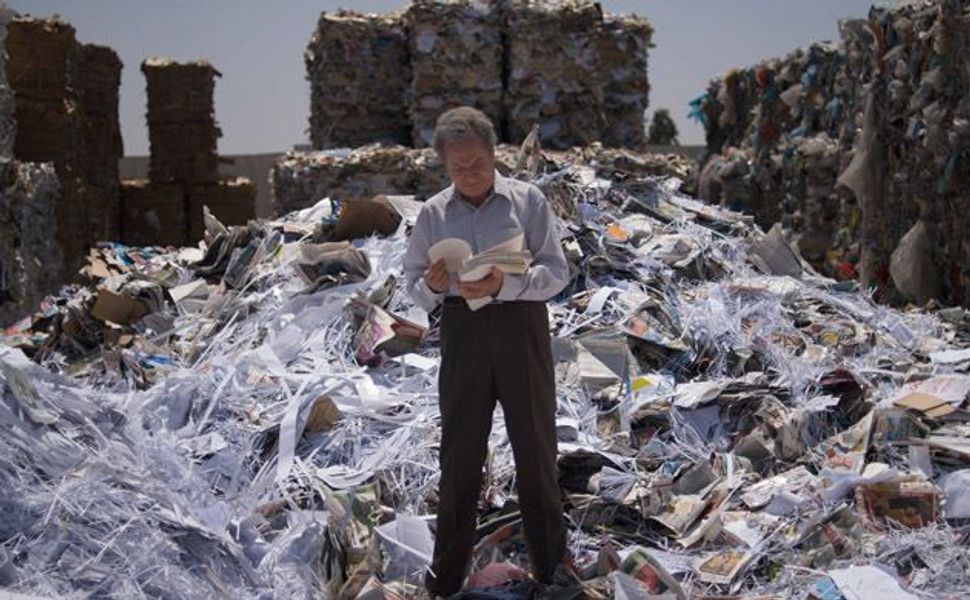 Nightmare: In this sequence Eliezer Shkolnik (Shlomo Bar Aba), the stubborn father and philologist of ?Footnote,? dreams his Talmudic research is all destroyed. Image by Ran Mendelson

The Cannes International Film Festival is known for selections that push the envelope, whether in terms of story, cinematic form or ideological vision. For example, Amos Gitai has been a Cannes favorite in the past with films like “Kippur” and “Free Zone,” often exploring political tensions with stylistic verve. This year, the prestigious competition selected from Israel a more character-driven motion picture: Whereas its director, Joseph Cedar, is known for “Beaufort” (nominated in 2007 for the best foreign language film Oscar), a war drama about the South Lebanon conflict, “Footnote” (“Hearat ShuyLaYim”) is about a father-son rivalry set in the academic world.

The Israeli presence at Cannes this year is quite pervasive. In addition to “Footnote” (chosen to be part of the Cannes Official Selection lineup), the Critics Week sidebar selected Hagar Ben Asher’s “The Slut,” while two Israeli shorts — “Martha Must Fly” and the animated “On My Doorstep” — are part of Cinéfondation, a Cannes program that chooses the best student films from around the world. Moreover, the seven Israeli titles screening in the commercially oriented Cannes market include Palestinian-Israeli Sameh Zoabi’s “Man Without a Cell Phone,” which, in April, was presented in New York at the New Directors/New Films festival.

Recent prize-winning Israeli films such as “Ajami” illuminate tensions between Jews and Palestinians, but the focus of the tragicomic “Footnote” is on contemporary scholars of talmudic studies. Themes of professional vanity and filial loyalty are played out through Eliezer Shkolnik (Shlomo Bar Aba), a dour purist who has devoted decades to close textual examination, and his son, Uriel (Lior Ashkenazi), a popular professor. When the latter receives an honor in the opening scene, the camera remains on the humorless father in the audience.

Later, the news that the prestigious Israel Prize will be awarded to Eliezer vindicates the proud loner. But the embarrassed committee tells Uriel that the announcement was a mistake: He is actually the recipient. Will Uriel succeed in convincing the committee to honor the announcement and give the award to his arrogant father? Or will he succumb to the committee’s insistence on the truth, partly because he himself will never again be eligible for the Israel Prize?

“Footnote” was well received by critics at Cannes, who acknowledged Cedar’s shift of focus from the tense war terrain of the 2000 South Lebanon conflict in “Beaufort” to the academic skirmishes of the Hebrew University of Jerusalem. “This film does not deal with conflict at the national level, but rather within the context of a personal story,” the director said at Cannes. “It reflects the desire to live peacefully in Israel. In the Talmud, it says that you should not do unto others as you would not like them to do unto you. In a word, compassion.” Talmudic texts were edited and conveyed orally, written down and copied in manuscripts over hundreds of years, and finally printed in the 15th and 16th centuries. Today the study of traditional sacred texts is controversial because the analytical approach questions the reliability of the manuscript. Uriel is a proponent of this “big picture” approach, while traditionalist Eliezer calls himself a philologist.

A bit surprisingly, Cedar said, “I love Eliezer — he’s tragic,” about a character who never asks for sympathy. He explained the aging scholar’s bitterness in terms of “someone else having published what he spent 30 years working on. Eliezer has never compromised his integrity, and he has paid a price.” Perhaps the film’s most pungent line about Eliezer is a remark by his daughter-in-law: Because he finally smiles upon learning that he is to receive the Israel Prize, “he’s like an anorexic who starts eating again.”

To play the curmudgeon, Cedar chose Shlomo Bar Aba, who is not a film actor; he is best known as a comic for his work onstage. (Lior Ashkenazi called him “the Israeli Peter Sellers.”)

Cedar said that although he is closer in age to Uriel, “we made the movie as if we were Eliezer, with a focus on every little detail as opposed to the big picture.” But Cedar’s personal agenda differs substantially from that of either of his protagonists: It’s difficult to imagine Uriel or Eliezer flying the other to Cannes to see a personal dramatization of a filial struggle, as Cedar indeed did for his parents.

The most challenging and memorable scene in “Footnote” is a darkly humorous confrontation set in a cramped room: Uriel meets with the five-person committee, which insists he tell his father that the Israel Prize announcement was a mistake. His refusal leads to a heated exchange, rendered comic by having six chairs squeezed into a tiny office with hardly any room for the camera! Uriel fights for his father, even hitting Eliezer’s main antagonist, Yehuda Grossman.

When he later sees Grossman, Uriel apologetically suggests, “There are things more important than truth.” For the director, this is a complex issue. “Uriel says it against the backdrop of a school of thought where truth is the only value,” he told the Forward. But what if truth is relative? “Yes, Uriel subscribes to the belief that there is no one truth. By the end, his father is forced to admit there is no truth, either,” he said.

Born in New York, Cedar immigrated to Israel with his family at age 6. He lives in Tel Aviv and teaches at the Sam Spiegel Film & Television School, in Jerusalem. On being selected for Cannes’s competition, Cedar remarked: “Israel’s film industry has become very competitive. Being in Cannes with ‘Footnote’ is an absolute good. When filmmakers come to the festival, some want to win; some want to be popular. And some, like me, want their film to be bought by Sony Classics for distribution.” His wish was fulfilled when, even prior to winning the prestigious Best Screenplay award, a distribution deal was announced during the festival: “Footnote” will be released in the United States within a year.

Annette Insdorf is director of undergraduate film studies at Columbia University’s School of the Arts.

More Than a ‘Footnote’ From Cannes