Reading in Your PJs 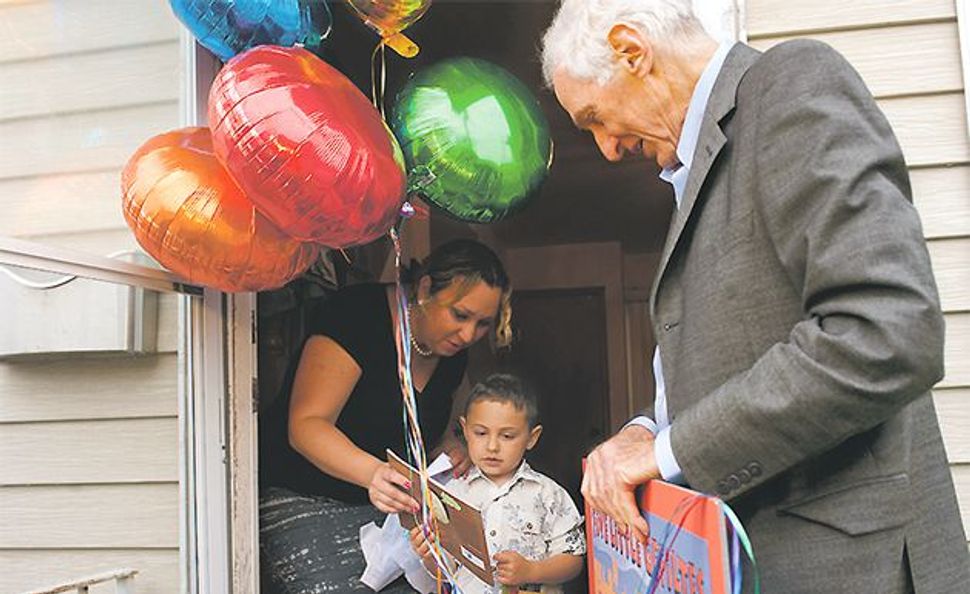 This fall, a non-Jewish publisher called Margery Cuyler intends to launch the first four titles of a new Shofar series of children’s books. Although Cuyler isn’t Jewish, she told the Forward that she has always been interested in publishing Judaica. Then she reeled off her debut titles — “The Golem’s Latkes,” “Hanukkah, Oh Hanukkah,” “Many Days,” and “One Shabbat” — which she hopes will become staples in American Jewish homes.

Faced with declining print sales and the growing threat of e-books, publishers are not normally so upbeat. But Cuyler, of Marshall Cavendish Children, is moving ahead with cautious optimism because her partner in the Shofar series is PJ Library, a program of the not-for-profit organization Harold Grinspoon Foundation that sends hundreds of thousands of free books to families across North America each year.

With such a massive appetite for books, PJ Library’s buying power is immense. Director of Operations Adrian Bailey estimates that she needs to find 88 new titles each year for children between 6 months and 8 years old. Her average order is between 12,000 and 15,000 copies. “I think PJ Library has really created a market,” Bailey said. “We have taken a lot of risk out of bringing Jewish children’s books to print.”

But PJ Library’s goal is not to single-handedly support Jewish children’s book publishing. Its aim is to nurture a greater interest in Judaism, particularly among intermarried or unaffiliated families. Launched in 2005, PJ Library initially mailed a Jewish-themed book or CD to 200 Western Massachusetts families each month. Today it mails 70,000 books per month to homes across North America. A spin-off program in Israel, Sifriyat Pijama, serves an additional 44,000 preschool children.

Linda Silver, a specialist in Jewish children’s literature who was an original member of PJ Library’s book selection committee, said that one of the biggest issues the organization faced from the outset was choosing appropriate books. She said that because the program is aimed at marginally Jewish or unaffiliated families, it has had to walk a fine line, producing books that have enough Jewish content to make an impact, but not so much that it alienates families.

With such a large number of participants, PJ Library cannot hope to please all its subscribers all the time. David Feder, who has been receiving the books for about three years, said he occasionally found the books “too religious” or so “tangentially connected to Judaism” that he was unsure whether they enhanced his child’s Jewish identity. But Feder, a co-dean of Jewish life at American Hebrew Academy, in North Carolina, said that, on the whole, PJ Library’s books were good. “It’s hard to complain too much about the quality of a free book,” he added.

Silver said that standards have always been high. “The one problem I see is when PJ Library starts contacting publishers and saying, ‘We need a book about dot, dot, dot,’” she said. (PJ Library recently put out a call for books about Jewish camp — a favorite topic of Grinspoon himself — even sending authors on an overnight trip to a camp for inspiration.) “Writing books to order generally doesn’t foster the creative process,” Silver said. But she was quick to add that although this happened from time to time, “to criticize the program for that would really be unfair, because it has so many more positive aspects.”

Laurel Snyder, a children’s book author from Atlanta, believes that PJ Library may actually have helped to raise standards. Snyder described the children’s book market as “brutal” and said that many great book ideas had been scrapped for fear that they might not sell enough copies. By increasing demand, Snyder said, PJ Library may have helped many worthy books get published.

In its deal with Marshall Cavendish, PJ Library has agreed to order between four and six Shofar titles per year. In return, it hopes to benefit from the guarantee of a regular source of quality new titles as well as from marketing opportunities that will come from Shofar books — each carrying a new PJ Library seal — being sold to Jewish libraries and synagogues as well as to Jewish and secular bookstores.

But PJ Library agreeing to place an order for each Shofar title does not mean that the venture is risk-free for Marshall Cavendish. As with all its books, PJ Library versions of Shofar titles will be published in softcover and sold at a deep discount (neither Marshall Cavendish nor PJ Library would reveal the precise cost). Nevertheless, Cuyler noted that being guaranteed sales of children’s books when public library and school budgets are being slashed is a bonus.

In an effort to understand what, if any, impact PJ Library is having, the Grinspoon Foundation last year hired the Jewish Education Service of North America to conduct a survey of its members. Slightly more than 40% of 37,500 PJ Library families contacted responded, a relatively high rate for a study of this kind. Of those, 72% were Reform or Conservative families and 11% described themselves as “just Jewish.” About one-third of them were unaffiliated with a synagogue, and more than half said they attended synagogue only “every few months.”

Of some 17,000 families that took part in the survey, almost 90% said the program enhanced their Jewish life and three-quarters said the books “spurred conversation” about Judaism. Many families reported that PJ Library had influenced their decision to celebrate the Sabbath or Jewish holidays and to become more involved in the Jewish community.

Silver said that it is very difficult to quantify the value of such a program because the value of a book is so “intangible.” She cited research showing the benefits of introducing books to children at a very young age to enhance reading skills. But ultimately, she said, PJ Library’s effectiveness in fostering Jewish continuity depended upon a person’s faith in the ability of the human mind to be influenced by ideas. “Because one source of those ideas,” she said, “is books.”

Paul Berger is a freelance writer based in New York.

Reading in Your PJs