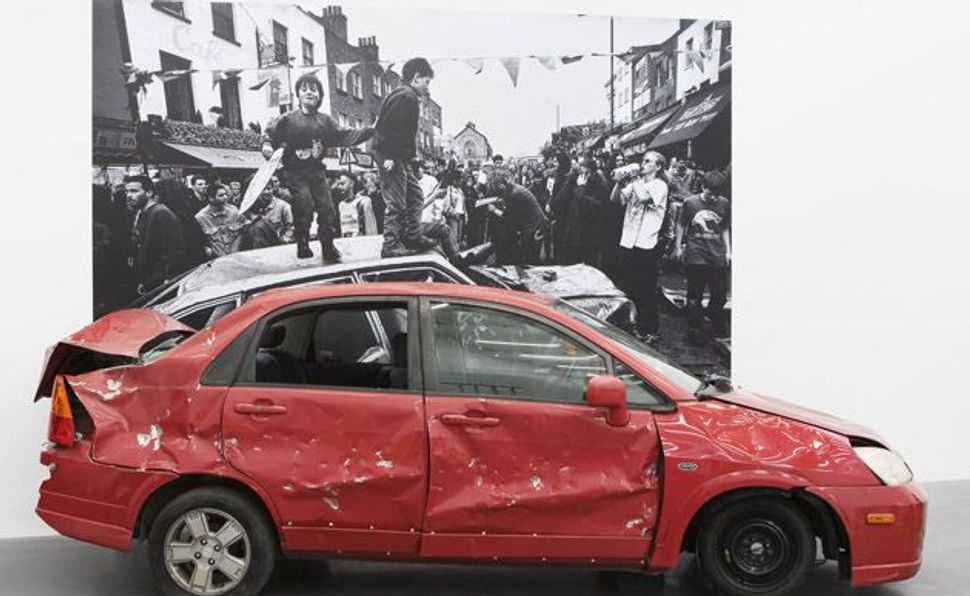 Anti-Automobilism: Metzger regards the use of cars as a contemporary disaster. Image by Benoit Pailley, New Museum

The Jewish artist Gustav Metzger, longtime resident of the United Kingdom, has long been an inspired artistic equivalent of the orators seen and heard at Speakers’ Corner in London’s Hyde Park, uninhibited deliverers of social and political messages. Born in 1926, Metzger the artistic orator finally has his first solo American exhibit, “Gustav Metzger: Historic Photographs,” at New York City’s New Museum, where his powerfully gritty assemblages can be seen until July 3.

“Gustav Metzger: Decades 1959–2009,” a 2010 publication from Koenig Books, explains how Metzger was born in Nuremberg in 1926 to Polish-Jewish parents. In 1939, Metzger and his brother, Mendel, were brought to England on a Kindertransport, but their parents were murdered in Buchenwald. Metzger told one interviewer that his inner development “began as a child in Nuremberg, reading the Bible. You can’t have a greater introduction to intellect and history, and that’s what I had from the age of three. And I was fully prepared to take it in, and I was happy to learn whatever I could as a young, budding Jew.”

As a youthful resident of Leeds, Metzger saw art as activism, a way of working to prevent the war’s horrors from repeating. British curator Sir Norman Rosenthal has explained how although Metzger studied with the eminent painter David Bomberg, he did not become a figurative painter like other Bomberg pupils, such as Frank Auerbach and Leon Kossoff.

Metzger’s fiercely independent streak became obvious on a recent London-like dreary day, when I visited his New Museum exhibit. The museum is located on Manhattan’s Bowery, situated amid kitchen-supply stores whose wares crowd the sidewalks like so many tragedy-laden assemblages by Metzger himself. Just past the Bowery Mission, another focal point of human suffering on the world’s most notorious skid row, is a coldly anonymous building that houses the New Museum. Installed on its fourth floor is “Gustav Metzger: Historic Photographs.”

The visitor steps out of the elevator and onto wooden planks, such as wartime deportees might have seen on the livestock wagons that transported them, and runs smack into a wall with a giant photo blowup of a concentration camp selection process. This in-your-face, you-are-there approach is typical of Metzger, who, despite the title of his exhibit, is constantly altering history through his own creative imaginings and dramatizations.

Metzger’s “Historic Photographs: No.1: Liquidation of the Warsaw Ghetto, April 19–28 1943 (1995/2009)” employs the famous photo of a Polish-Jewish youngster and others being rounded up by Nazis, an image that inspired, among other works, historian Dan Porat’s “The Boy: A Holocaust Story,” (Hill and Wang, 2010). Metzger separates the viewer from the image by placing a mound of crumbling reddish bricks in front of the latter, evoking the rubble of bombed cities and related images of destruction.

A couple of artworks alluding to strife in the Middle East, including “Historic Photographs: Jerusalem, Jerusalem, 1998,” have less graphic impact, in part because the original photos the artist chose to work with have less inherent iconic power, but also because the media employed, in which a black-and-white photo is affixed to transparent plastic, seems more shifting and evanescent, less solidly anchored, than other artworks that are attached firmly to the museum’s walls. Other pieces also misfire because of their installation, like “To Crawl Into — Anschluss, Vienna, March 1938 (1996)” which is placed flat on the floor, covered with a sheet. The website indicates that the original image, of Viennese Jews forced to wash the pavement, can be seen only when “viewers are forced to crawl underneath the sheet, and in the process, assume the same prostrate position as the individuals in the photograph.” On the day I visited the exhibit, visitors simply lifted up the sheet and peeked underneath while they remained standing. In Metzger’s art, where the mise-en-scène is so important, this might be seen as a directorial misstep.

Metzger is on surer ground in more recent history, fervidly displayed in “Historic Photographs: Kill the Cars, Camden Town, London 1996 (1996/2009).” In an atypically triumphant scene of public revelry, automobiles (Metzger is well known as an opponent of traffic) are trashed and trodden underfoot by a crowd of young and old alike, as an audiotape of British children’s voices chirping “Kill the cars!” loops in the background. In this Kermesse of car hatred, the photo is once again separated from the viewer, this time by a battered red compact car whose label indicates that it was acquired from a dealership in Long Island’s Hempstead, although a gas-guzzling SUV might have made an even more powerful, albeit more expensive and perhaps clichéd, statement. In all his art, Metzger the former Kindertransport evacuee expresses intense empathy with young people, who will be saddled with the ruined planet handed over to them by thoughtless elders. In “Historic Photographs: Trang Bang, Children Fleeing South Vietnam, April 1972 (1998),” an image that is intermittently projected onto a curtain of thin bamboo stalks shows two Asian youngsters who echo horrific media imagery of napalmed villagers during the Vietnam conflict. Violently rejecting the enemy, whether militarists or automobilists, Metzger’s ferocity makes him seem right at home in Downtown Manhattan, as an example of that archetypal Big Apple denizen, the passionately infuriated old New Yorker.