Art That Does Not Hide Itself 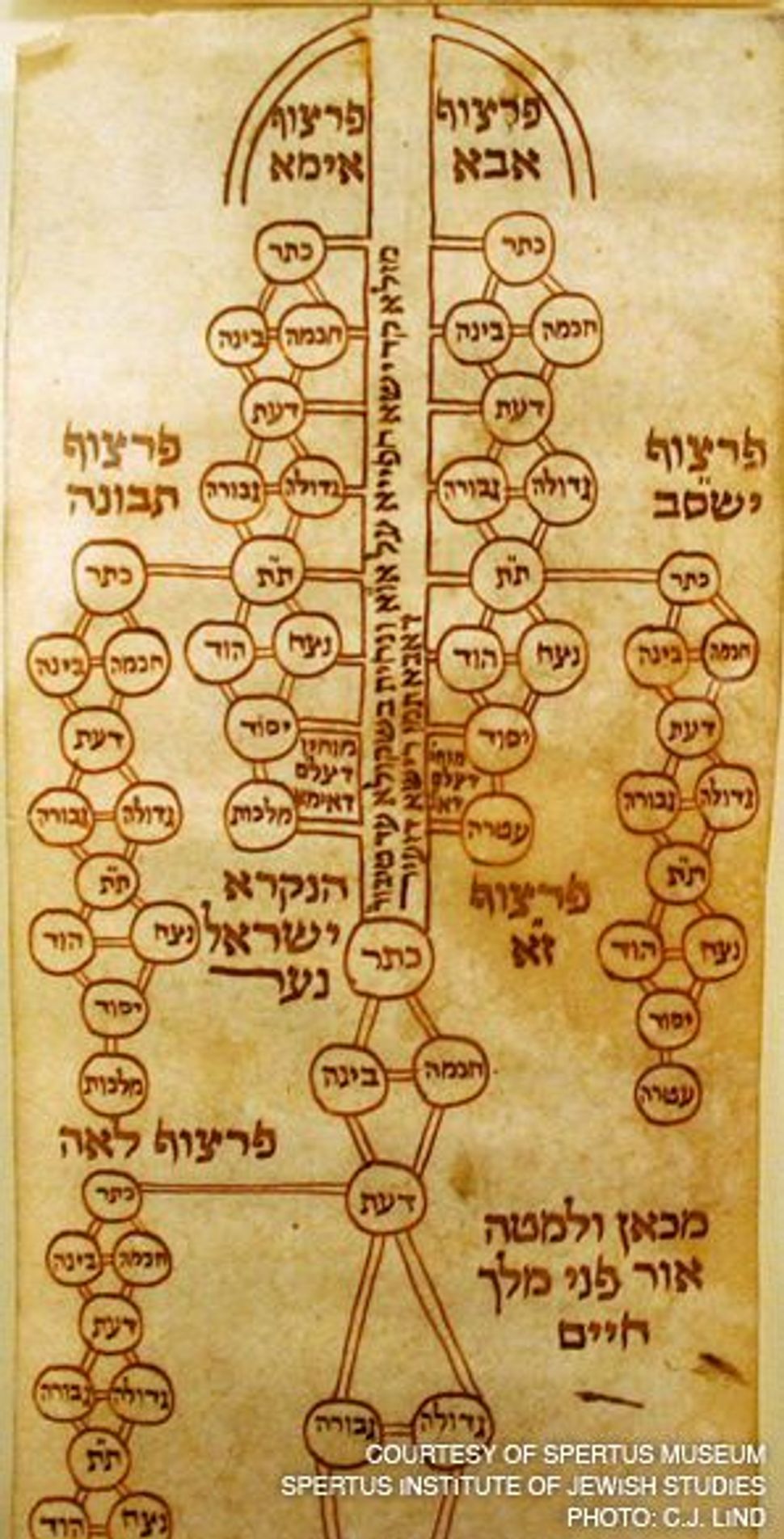 TREE: Above, ?Holy Tree,? a 19th-20th century ink-on-parchment image, incorporates Hebrew text and diagrams of the 10 divine attributes in Kabbalah.

Most of the works that appear in the exhibit Idol Anxiety, at the University of Chicago’s David and Alfred Smart Museum of Art, feature Christian and pagan content. But exhibit curator Aaron Tugendhaft credits the “heightened awareness” he developed from studying the Talmud as a child with helping him discover “valuable distinctions not seen by others” in the process of how objects avoid becoming idols. 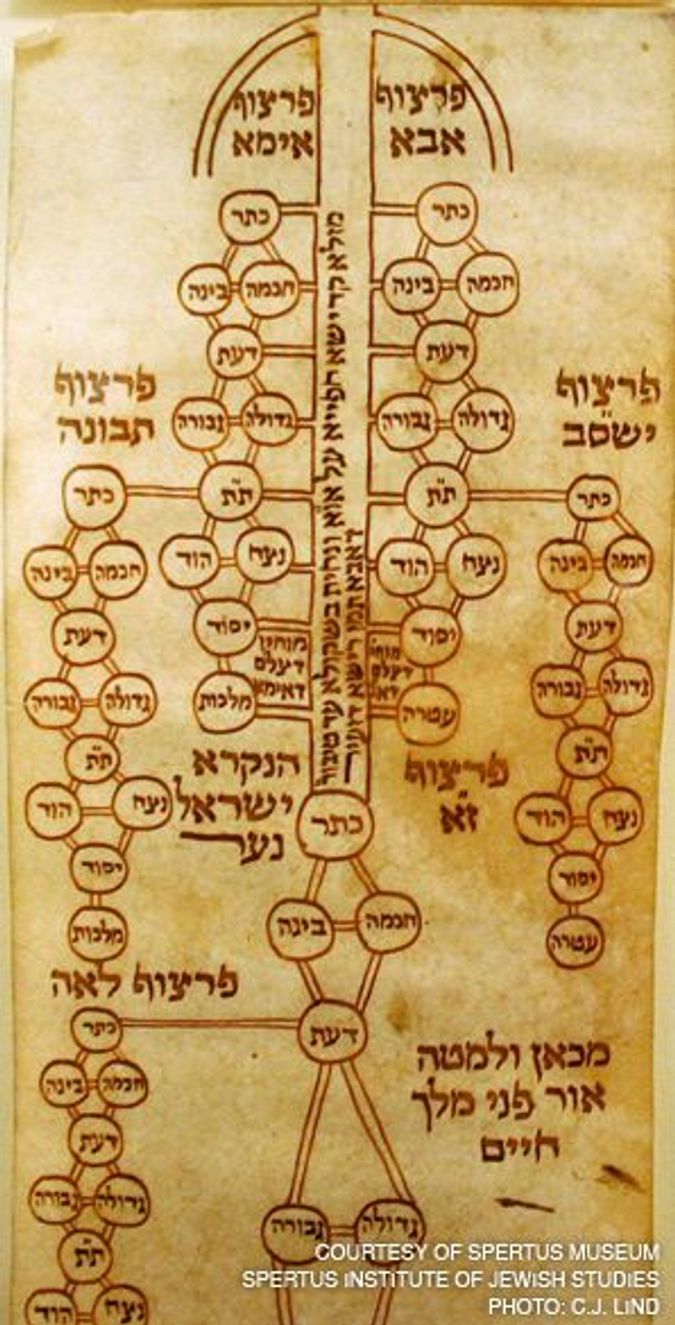 TREE: Above, ?Holy Tree,? a 19th-20th century ink-on-parchment image, incorporates Hebrew text and diagrams of the 10 divine attributes in Kabbalah. 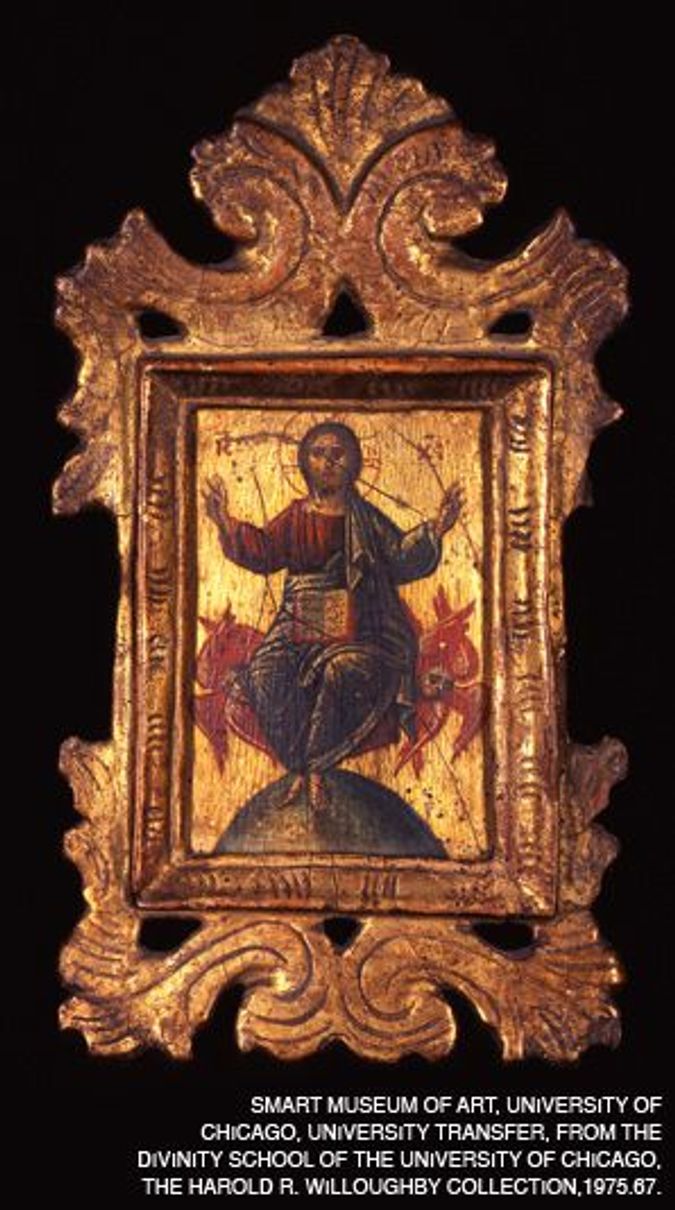 BODY OF WORK: A Christian kabbalist might have drawn inspiration from works like ?Christ Pantocrator,? a 17th-century oil-and-tempera painting in which the artist followed Saint John?s interpretation that the incarnation rendered the Second Commandment obsolete.

Tugendhaft, a doctoral candidate in Hebrew Bible at New York University, envisioned Idol Anxiety while studying German playwright Bertolt Brecht. “Brecht calls for a theater that does not hide itself as theater, that shows the sets and costumes to be sets and costumes,” he said. “In this I heard echoes of the prophetic statements in the Bible declaring idols to be ‘works of the hands.’”

Tugendhaft decided that an “idol” was not really a thing at all, but instead a way of viewing (or degrading) art and seeing it as “for some reason failing to achieve its intended goal.” After becoming interested in how artists tried to prevent their work from failing, he discovered a “whole spectrum of nuanced understandings of what would constitute a successful use of an object and what would be considered failure.”

This spectrum is evident in two objects, one Jewish and one Christian, that hang side by side in the show. The Jewish image, an ink-on-parchment 19th-century Yemeni “Holy Tree” amulet, incorporates Hebrew text and diagrams of the 10 sephirot, or divine attributes in Kabbalah. The show suggests that this amulet avoids the Second Commandment’s ban on representing the divine by giving physical form to the divine attributes rather than trying to depict God directly. In modern art terms, the amulet is an abstraction rather than a naturalistic portrait.

The Christian kabbalist who created the companion piece shared no such concerns about directly representing God. The 1515 woodcut from the first printed edition of the New Testament in Syriac shows Jesus crucified, with a haloed saint looking up at him. An eagle beside the saint identifies him as John, and between him and the cross is the first verse of John’s Gospel, “In principio erat verbum” (“In the beginning was the word”). Behind Saint John are a seven-branch menorah and a football-shaped form that circumscribes the 10 sephirot. The artist joined the sephirot with the crucifixion through lines representing the stigmata that connect each sephirah with one of Jesus’ wounds. Where the “Holy Tree” carefully draws the line at representing attributes of God, the woodcut maps the divine body over the human body.

The Christian kabbalist might have drawn inspiration from works like the 17th-century oil-and-tempera painting “Christ Pantocrator,” which is also included in the exhibit. The artist followed Saint John’s interpretation that the incarnation (God assuming the flesh in Jesus) rendered the Second Commandment obsolete. John argued that the Old Testament forbade representing God only because God had no form. Once God became human, there was no reason to further limit imaging the divine.

Other works in Idol Anxiety use a variety of different techniques for navigating the Second Commandment. Limestone Iraqi statuettes from the second-millennium BCE commemorate dead ancestors (like photographs today), while a second-century carved marble miniature of the Aphrodite of Aphrodisias from Southwest Asia Minor was effectively a “representation of a statue of a god” that worshippers could bring home as a souvenir. Mesopotamian sculptures from the mid to late third-millennium BCE were almost exact opposites of idolatry. Instead of representing God for human consumption, these figurines were put before the Gods to remind them of their human worshippers.

Perhaps the most elaborate was the dramatic production of the Mesopotamian mīs pî (mouth-washing) ritual, wherein each artist who had created a statue had his tools dumped in the river and underwent a symbolic amputation of his hands, all the while crying, “I did not make it; I swear I did not make it.” A clay fragment from a cuneiform tablet detailing the ritual appears in the exhibit.

Just as the Mesopotamian artists underwent a ritual denial of the human origin of their work, much rabbinic ink has been spilled on the matter of deriving pleasure from idolatry, perhaps even prohibiting an exhibit like Idol Anxiety on the grounds that enjoying an exhibit of idols violates the Second Commandment. But Tugendhaft’s talmudic training prepared him well to parry that charge and to expose it as simplistic: “I would say that only someone who has spent too much time studying Massechet Avodah Zarah,” the talmudic tract on idolatry, “would think that ‘deriving pleasure’ is a root problem in our concern about idolatry.”

Art That Does Not Hide Itself