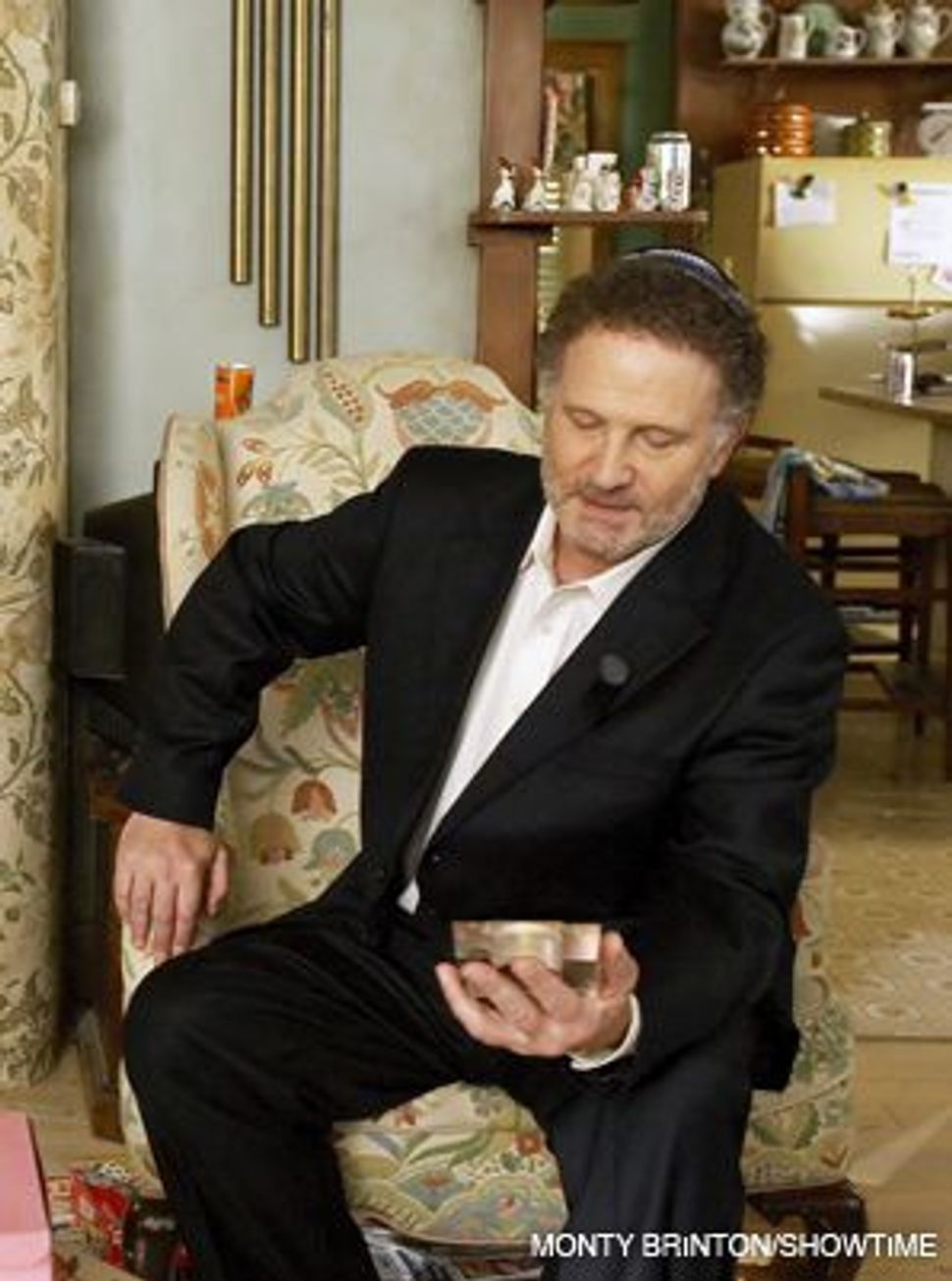 HAM: Albert Brooks has joined the cast of ?Weeds? as Lenny Botwin, the Jewish father-in-law of the main character played by Mary-Louise Parker.

Who were the first Jewish potheads? The Old Testament seems filled with early precursors: Daniel, the interpreter of colorful dreams; Ezekiel, with his visions of flying chariots; perhaps even David, whose tunes of ethereal majesty were conceivably inspired by some seriously bitter herbs. Other scholars might go back to Genesis — Adam and Eve in that ripe, green pleasure-palace, hungry enough to eat forbidden apples. And then there’s slightly more recent history: Allen Ginsberg extolled the virtues of marijuana in pulsing, desperate verse, and Leonard Michaels wrote short stories about Jews on New York City’s Lower East Side getting stoned with sweet-smiling shiksas and then devouring leftover kugel sent over by their own mothers. 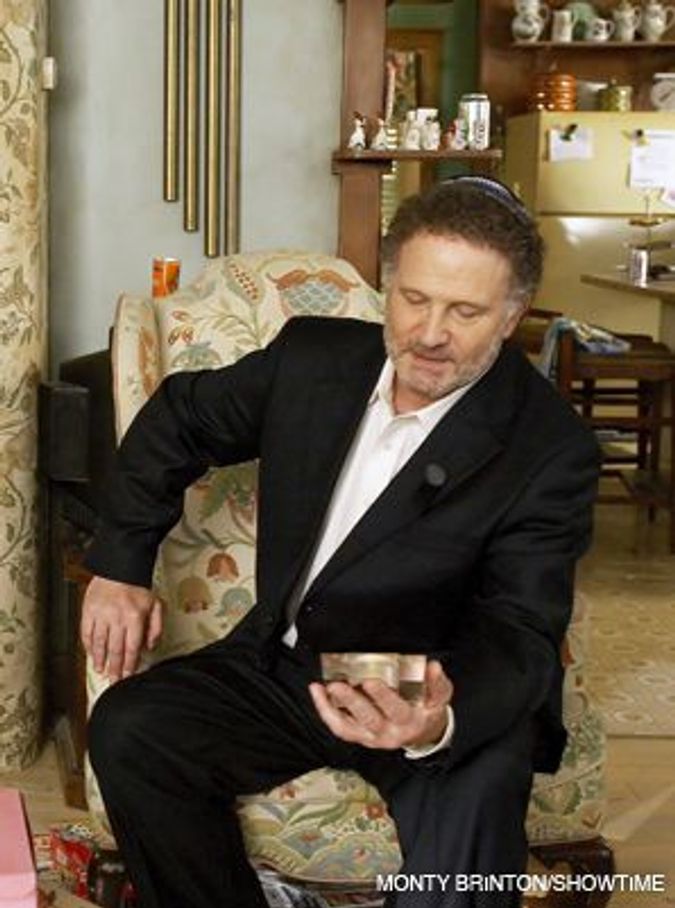 HAM: Albert Brooks has joined the cast of ?Weeds? as Lenny Botwin, the Jewish father-in-law of the main character played by Mary-Louise Parker.

So perhaps it should come as no surprise that Showtime’s series “Weeds,” a quasi-sitcom about an attractive, widowed suburbanite who sells marijuana in order to support her family and her addiction to iced lattes, is filled with Jews, half-Jews and attractive women married — or once married — to Jews. Over its first three seasons, “Weeds,” more than any other show, has created Jewish characters that defy stereotype. Andy Botwin, the brother-in-law/partner-in-pot-dealing of our protagonist, Nancy, is a blue-eyed, fair-haired Jewish man with toned triceps and a fierce slacker wit. His only talent is his ability to create delightfully unkosher gourmet meals. Andy’s brother — Nancy’s deceased husband, Judah, who we see in dream sequences and in home movies — is played by Jeffrey Dean Morgan, the muscle-bound heartthrob who captured the loins of Katherine Heigl and plenty of American women in his role as Denny Duquette on ABC’s “Grey’s Anatomy.” Then there’s Dean Hodes, a Jewish lawyer more interested in getting stoned than in making money. As we learn in one episode, he is anatomically very well endowed.

In its first three seasons, “Weeds” did well at mining Jewish issues for humor, while keeping the humor aimed away from the Jews themselves. Last season, in one of television’s greatest religious-zealot/drug-dealer interactions, a Christian schoolteacher offers condolences on the death of Nancy’s husband. Nancy, misunderstanding her use of the word “passing,” replies, “Yeah, most people thought he was Italian.” Best of all was a subplot in which Andy, after drunkenly signing up for the military, is forced to attend yeshiva in order to avoid a trip to Iraq. While at yeshiva, he falls for Yael, a young Israeli who works in the admissions office, and who finds nothing in the Talmud to bar her from sodomizing Andy with a strap-on.

These characters are exciting because they both play on and contradict our expectations about Jewish types. They are not old yiddlers munching gefilte fish, or nebbished-out neurotic nerds (like Larry David), or money-hungry misanthropes (like Larry David). Instead, the Jews on “Weeds” come from a contemporary Jewish America in which some Jews have blue eyes, some yeshiva employees are into S&M and some Semitic men have large penises.

All of which is why it is so disappointing that the show’s fourth season, which premiered in early June, has introduced a totally uninteresting Jewish character who lives up to every negative stereotype there is about Jews.

The first episode of the new season begins with Nancy and her brood on the run. She has recently committed arson and is in danger of exposure as a drug dealer. In a panic, she takes her clan to hide out at “Bubbe’s house.” Bubbe is Judah and Andy’s grandmother. Nancy’s relationship with Judah’s family, we learn, has always been fraught; the family members boycotted her wedding, and they worry that her children look like gentiles. On arrival, Nancy is greeted by a disturbing sight: Bubbe is unconscious and hooked to a feeding tube. Caring for Bubbe is Judah’s father, Lenny (played by Albert Brooks), a degenerate gambler who refers to Nancy as “Not-Francie” — Francie being the Jewish ophthalmologist whom Judah was supposed to have married. Lenny greets his prodigal outlaw in-laws coldly, until Nancy lets it slip that they’re on the run. “Well that, at least,” Lenny explains, “I can wrap my head around.”

Call me a blasphemer, but I don’t think Brooks has done anything right since his 1985 film “Lost in America,” and his “Weeds” cameo only offers more proof. His Lenny seems to fit the well-worn mold of a goy-hating, cash-worshipping Jewish father. He refers to his grandson Silas as Klaus, and blames the kid’s eczema on Nancy’s watering down of the gene pool. He remarks on the inappropriateness of Nancy arriving at his home smelling of gasoline (remember, she is an arsonist) and eating German food (picked up at a highway rest stop, at the suggestion of Andy). These jokes are cheap and, more offensively, not funny. At the episode’s end, Lenny allows the family to stay on — not out of generosity, but from what it seems is apparently another stereotypical Jewish trait: the duty to take on other people’s burdens, then make them feel guilty about it. In the next episode, he actually requests financial compensation.

What irks me about Lenny is not that he is a creep and a jerk — the world is filled with Jewish creeps and jerks, and it would be unfair to ask that all Jewish characters have redeeming qualities — but that his creepiness and his jerkiness seem directly tied to his Jewishness. (When Lenny plays Bubbe’s concentration camp numbers in the lottery, it’s hard not to see it as reiterating the stereotype that Jews exploit their tragedies for financial gain.) No, I’m not a representative of the Anti-Defamation League. I care more that this otherwise excellent show — which seemed in its first few seasons able to mine Jewishness for legitimately funny and original material — has descended into such cliché. Still, there is hope. As of the fourth episode, Lenny’s character has been eased out of “Weeds.” Maybe the show’s writers were also sick of him.