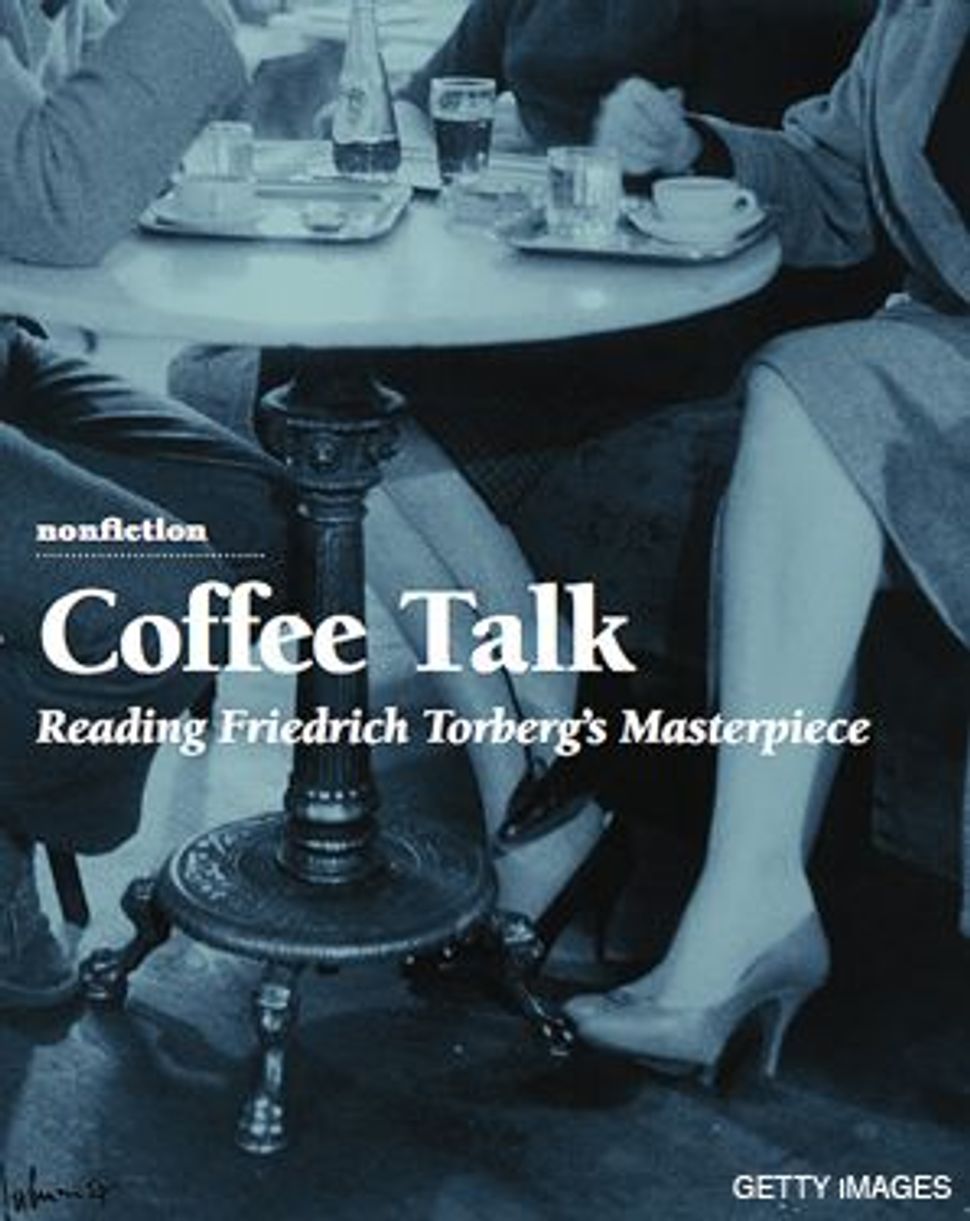 Tante Jolesch or The Decline of the West in Anecdotes 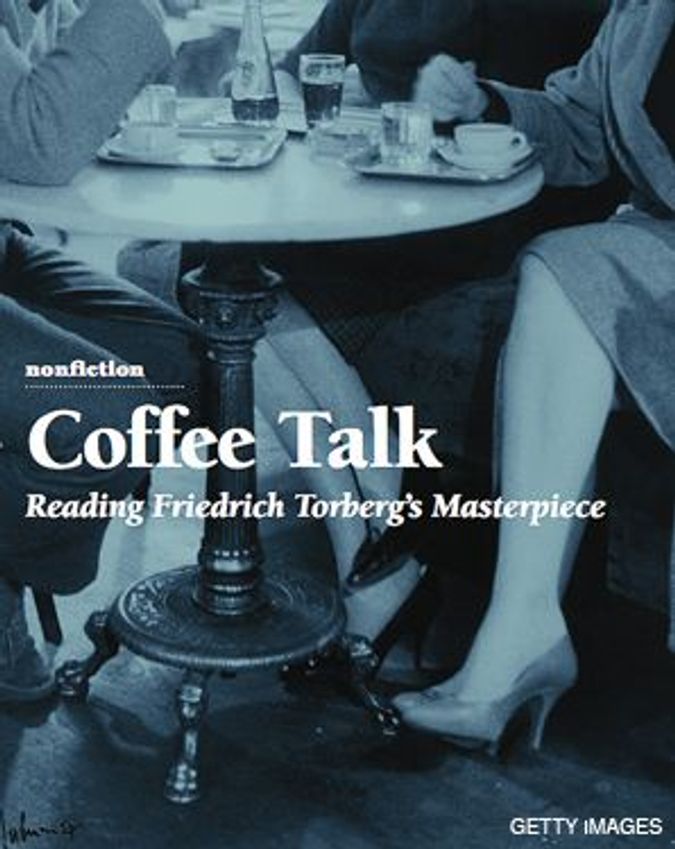 Café society finds its most perfect literary expression in the anecdote, a short, fast form embodying the corner table’s blend of gossip and exaggeration, caffeinated humor and political ideals. At the beginning of the past century, the anecdote emerged as the great new literary form of Europe, despite the fact that it constituted not literature but talk — the conversation of those who’d consider themselves “literary,” or only loved the sound of their own voice.

Amid the nostalgia following wartime decline, however, writers from Paris to Moscow began to disburden themselves of books relating the anecdotes of the West they used to know: the worlds of the famous (Kaiser Anecdotes), the ethnic (101 Jewish Anecdotes) and the miscellaneously both, in a transgression of the very meaning of the form. The modern anecdote — in German, Anekdote; in Polish, anegdota; in Czech, Slovak and Hungarian, anekdota — derives from the writings known as Anekdota, penned by Procopius of Caesarea, biographer of Justinian I, last of the historians of Antiquity; the term means “unpublished” or, literally, “things never given out.”

Friedrich Torberg was the penname of Friedrich Kantor, the Procopius of Vienna. He was born in that city in 1908 to a family whose origins represented the diversities of both Jewry and late empire: Torberg’s mother was Hungarian and his father was Czech, and while Vienna was Torberg’s nativity and subject, the author attained maturity in Prague, third city of the crown. Those Kaiser years are legend, and have been written about so painstakingly that we need only mention names: Altenberg, Broch, Freud, von Hofmannsthal, Kafka, Klimt, Kokoschka, Kraus, Loos, Mahler, Musil, Roth, Schiele, Schoenberg, Schnitzler, Werfel.

Torberg’s “Tante Jolesch or The Decline of the West in Anecdotes” — just translated for the first time into English —proposes others, lesser known: Egon Erwin Kisch, indefatigable journalist of Prague, and Franz (Ferenc) Molnár, playwright from Budapest. Torberg fled the Nazis, arrived in America to suffer for the exile press, then returned to Vienna, where he died in 1979 after publishing two editions of one of the most sorrowed yet delightful masterworks I’ve ever had the honor of reading.

“Tante Jolesch,” though opening with an examination of the life, times and sayings of that aunt, focuses on the talk of the café, the quicksilver rumors, arguments and jokes of Torberg’s idealized Stammtisch — an imaginary, jour fixe four-top around which the author would gather Vienna’s ghosts, the dead writers and journalists of the empire between the wars.

But first, about Tante Jolesch:

“Such an aunt or grandmother, whose poignant remarks — partly witty, partly profound — were quoted by all relatives, could be found in almost every one of the multifaceted families whose branches covered Vienna, Prague, Brno, Budapest, and other parts of the Austrian and Hungarian halves of the monarchy. It was, indeed, the domain of women to create such ‘aphorisms of practical wisdom.’ Men had to make money, work on the family’s upward mobility, and, if needed, support wayward sons or nephews who had chosen careers in the arts or related unprofitable occupations.”

This quodlibet’s making might qualify as such an occupation, as the profit is entirely the reader’s. Torberg offers fleeting, referential anecdotage pertaining to school and work, psychoanalysis, love and friendship, food, sports, obtaining exit visas for America and vacationing at the spa at Ischl. It should be taken as a mark of Torberg’s achievement, and entertainment value, that the present reviewer would rather quote the author’s words than give his own in criticism:

“The case of the ambitious bank employee Nelkenblum involved a specific matter of family names. He wanted to change his name, a common wish in those years — often in preparation for baptism — by holders of family names that were unusual, strange sounding, and commonly considered Jewish.”

So, Herr Nelkenblum submitted a request for a name change and was asked by the relevant government office to provide sufficient reason for his wish.

Herr Nelkenblum stated that the name “Nelkenblum” hindered his career.

The authorities answered that his employer needed to attest to that.

“As requested by Herr Bernhard Nelkenblum, we gladly confirm the necessity of his desired name change since the name ‘Nelkenblum’ could have a detrimental effect on his career. “(signed) Feilchenfeld, President, Rosenblatt, Head Clerk.”

In the anecdote that immediately follows, Torberg inverts such assimilatory aspiration and has a Jacob Tschurtschenthaler, scion of a “respected Innsbruck family,” seeking a name change to Taussig to better fit in with Prague’s Jewish banking circles.

Then Tante Jolesch’s end was near; her time was up, the family was gathered around her deathbed, and the depressed silence was interrupted only by murmured prayers and suppressed sobs — nothing else. Tante Jolesch lay motionless on her pillow; still breathing, but just barely.

It was then that her favorite niece, Louise, gathered all her courage and approached the bed. Her voice was strangled with grief, but her words were no less urgent:

“Tante, you cannot take the recipe into the grave with you. Don’t you want to bequeath it to us? Won’t you finally tell us why your Krautfleckerln were always so good?”

With her last bit of strength, Tante Jolesch raised herself a little:

“Because I never made enough,” she said, smiled, and died.

As Krautfleckerln (cabbage and noodles), so Torberg’s anecdotal roll, there could never be too much. But Tante Jolesch expires, and Vienna Jewry follows, the denizens of café society coming to their ends in Nazi Poland, where there were no waiters and the coffee was made of mud. Those who survived or escaped are dispersed to Los Angeles and Chicago, to Buenos Aires and Saigon, where they try to revive the traditions of their klatsch. Torberg tells tales about refugees meeting daily on a Shanghai street, on a corner where a café should have been but wasn’t. Another story’s characters enthuse about an emigrant’s Wiener Schnitzel, “the best I have eaten since Manila.” Doubtlessly, though, that dish would have been served in Vienna in a café-restaurant, or a café-Konditorei, a type of establishment that began appearing in 1925, according to Torberg — an expensive, hurried distraction from former friendship and slow-sipping, signaling the beginning of the end of the autonomous café.

As for that coffee itself, Torberg maintains it should be just that: brewed coffee, and not newfangled espresso. Meanwhile, expectedly, the ratio of that actual fuscous liquid to added milk should prove almost kabalistically arcane: “A perfectionist among the former waiters of the Café Herrenhof used to carry a varnisher’s color chart with twenty numbered shades of brown at all times and made it his ambition to serve his regular guests coffee in the exact hues they desired. Orders and complaints were only issued in reference to the numbers. ‘A fourteen, please, with whipped cream!’ or, ‘What’s the matter, Hermann? I order an eight and you bring me a twelve!’”

Torberg’s “West” declines with book’s end, and a 1958 epilogue summates the authorial sorrow with bittersweet tact. Comprising a eulogy for Franz Hnatek, headwaiter of Café Herrenhof, “Vienna’s last literary café,” the pieties close covers in the midst of war, with Herr Hnatek standing sentry in his emptied café, inquiring whether or not “the other gentlemen” will soon return. The author’s famous last words: “For Herr Hnatek looked at world history as it related to Café Herrenhof and measured its ups and downs solely according to the absence or presence of his regular customers.”

As for those who did not return, let their unpaid bills be forgiven. Let this gloriously sad, sentimental but disabused book serve as a saucer for the overflowing cup of Vienna’s tears.