The Language Bibi and Bam Used 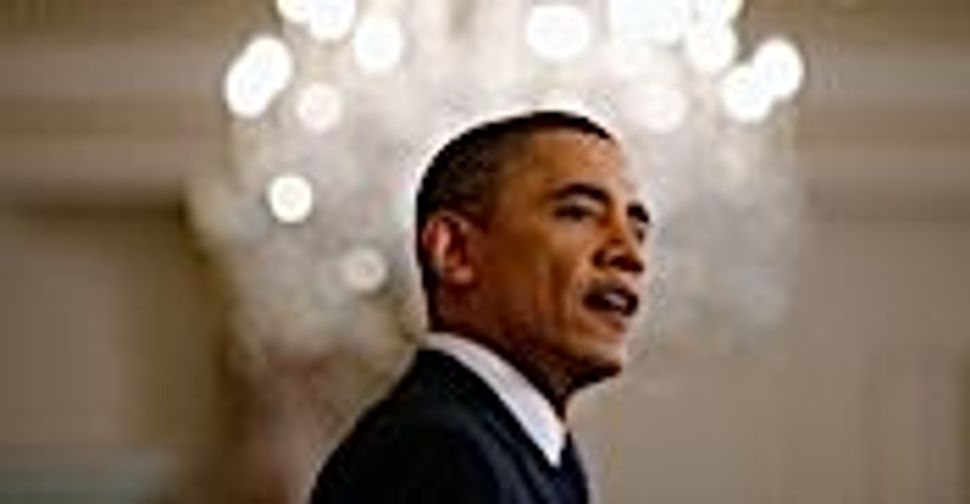 “On the Same Page?” asked a front-page caption of the June 3 edition of the Forward, beneath which were parallel excerpts from President Barack Obama’s May 19 speech on U.S. policy in the Middle East and Prime Minister Benjamin Netanyahu’s May 24 Congressional address. The second pair of matching quotes had the U.S. president saying: “We believe the borders of Israel and Palestine should be based on the 1967 lines with mutually agreed swaps…” The Israeli prime minister, on the other hand, was quoted as declaring: “Under any realistic peace agreement… places of cultural, strategic and national importance will be incorporated into the final borders of Israel.” (Prime Minister Netanyahu also added in his delivered remarks, “Israel will not return to the indefensible lines of 1967.”) And turning to the reader, the Forward said: “Judge for yourself.” 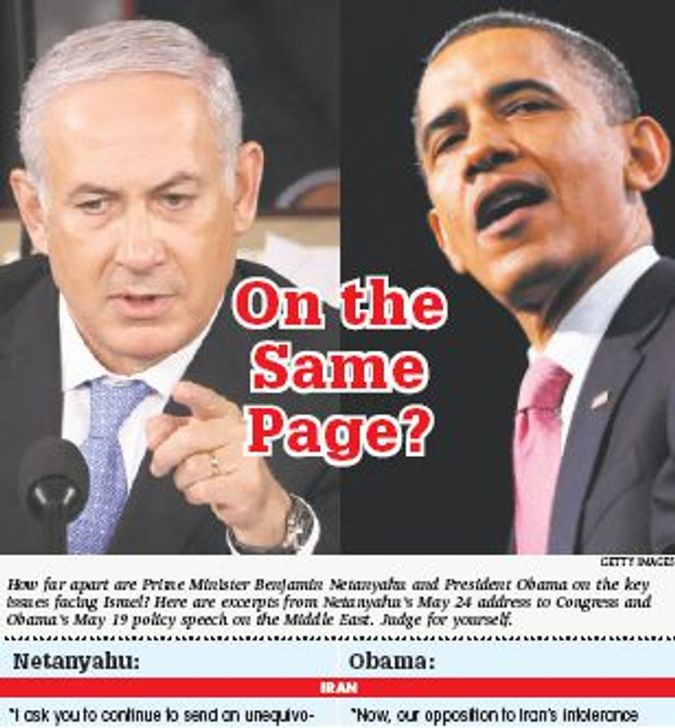 Sharing Real Estate: President Obama and Prime Minister Netanyahu together on the front page of the Forward, June 3.

In reality, of course, the gap between the two positions, which led to an open Netanyahu-Obama clash and much talk of a crisis between the two countries, may not be bridgeable. The borders that the current Israeli government wants, and the borders that the current American government is willing to support Israel’s demands for in any future negotiations with the Palestinians, may indeed not be on the same page. Yet in the meantime, negotiations are not about to resume, Israel needs America’s backing at the United Nations and elsewhere, and the entire fracas could have been avoided by a bit of linguistic common sense on Israel’s part. It’s a pity that it wasn’t.

After all, what does “based on the 1967 lines” mean? Not very much beyond implying a degree of both similarity to, and difference from, those lines. If I say, for instance, that the musical “Fiddler on the Roof” is “based on” Sholom Aleichem’s work of prose fiction “Tevye the Dairyman,” I am saying that while “Fiddler” draws its inspiration and some of its plot and dialogue from “Tevye,” it is also different from “Tevye” in significant respects. The same holds true for Israel’s new and old borders. A new border “based on” the old one is one that resembles the old one in some ways and not in others. It starts from the old one — and departs from it.

Isn’t this what Benjamin Netanyahu is calling for? If one looks at both the already built and the merely planned parts of Israel’s West Bank “security fence” begun by the government of Ariel Sharon, which presumably delineate the border that Netanyahu wants, they follow the 1967 cease-fire line closely for most of its length while diverging from it noticeably in a number of areas, such as Jerusalem and the so-called “settlement blocs.” Suppose that Netanyahu, instead of arguing publicly with Obama in front of the cameras, had said: “Mr. President, we, too, are for borders based on the 1967 lines, and since we and the Palestinians have a different idea of what that means, this is precisely why we need to negotiate.” Wouldn’t a lot of ruffled feathers have remained neatly in place?

“Aha!” you say. “You’re neglecting President Obama’s call for agreed land swaps! This means that Israel has to give the Palestinians exactly as much land from its side of the 1967 line as it takes from their side — and Israel, as another article in the same issue of the Forward points out, doesn’t have enough land to give. That being the case, what good would accepting the wording of ‘based on the 1967 lines’ do?”

But must “agreed land swaps” mean that Israel has to give the Palestinians exactly what it takes from them? It would only mean that if the “swaps” were on a 1-to-1 basis, which is, indeed, how both the Palestinians and previous U.S. administrations have understood the matter. And yet President Obama did not say “on a 1-to-1 basis.” He mentioned no basis at all. Moreover, the word “swap” in English doesn’t necessarily imply 1-to-1. If I say to you, “I’d like to swap some of the stamps in my collection for some of the stamps in yours,” I’m proposing to offer you value for value, not stamp for stamp — and value can be a very subjective notion. Why couldn’t Prime Minister Netanyahu simply have said, “Agreed land swaps are fine with us — and now let’s sit down with the Palestinians and try to agree on them”? How would he have compromised Israel’s bargaining position had he done that?

Although Israeli-U.S. tensions over Israel’s borders with the Palestinians may ultimately be unavoidable, they are not so now. All that was needed was a sensible rather than a knee-jerk reaction to the wording of President Obama’s speech. Given the importance of Israel’s relations with America, there was no need to start a quarrel today that could have been put off to tomorrow, especially since tomorrow may be a long way off. As a Hebrew expression has it, it’s not enough to be right — you also have to be smart.

The Language Bibi and Bam Used