Anxieties About Moving to Suburbia 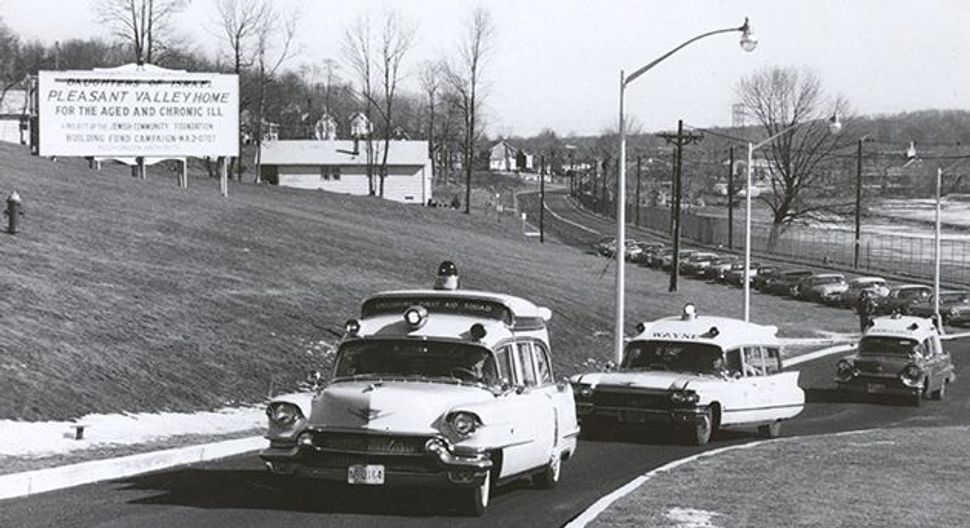 Parade of Ambulances: Newark?s Jews established the Daughters of Israel Home for the Aged in 1906 ? the first home of its kind in New Jersey. DOI followed the exodus that was under way and moved its residents in 1962 to start anew in the town of West Orange. Image by Jewish Historical Society of Metro West

Americans are on the move, in retreat from rising floodwaters, mounting mortgages and economic uncertainty. It’s gotten so that we’re hard-pressed to remember a time when the nation’s citizenry relocated from place to place volitionally, on its own steam, a time when mobility tracked upward rather than sideways or backward.

I’m prompted to think, and write, about mobility not only because of current events, but also thanks to the research of one of my students at The George Washington University. In her recently submitted senior thesis, Natalie Lazaroff explored the relationship between Newark, N.J., and its Jewish residents, many of whom voluntarily exchanged an urban address for a suburban one.

Once a thriving arena of Jewish life with a plethora of stately and imposing synagogues and other cultural institutions, Newark, much like other urban centers throughout the country, lost ground to the suburbs in the years following World War II, when a “new adventure in Jewishness,” as one Commentary writer would have it, beckoned seductively. The riots that followed in the wake of Martin Luther King Jr.’s assassination sounded the city’s death knell and sealed its fate. Thereafter, the Newark that resonated most profoundly with its Jewish residents was the Newark of the imagination; the Newark of Philip Roth’s prose; the Newark of alumni newsletters, exhibitions and back-to-the-old-neighborhood pilgrimages that took place entirely within the safe confines of a rented bus rather than accidentally on the noisy street.

While many welcomed the opportunity to pull up stakes and to set down new roots where the houses were bigger, the lawns greener, the air fresher and the neighbors whiter, a number of the community’s leaders expressed keen concern about the future. Putting pen to paper, and at times even voicing their fears at public meetings, they worried about the consequences of affluence — for themselves, their immediate families and the Jewish community writ large. They also worried about the fate of the urban environment that they had helped nourish and sustain.

Lazaroff’s paper contains numerous references to these anxieties; her work makes vividly clear that those who left Newark in search of greener pastures were just as inclined to look back ruefully at what they had left behind as they were to look ahead optimistically at their sunnier prospects. Even as they resolutely pressed forward beyond the city limits, ambivalence colored their decision, as did a gnawing sense of loss.

It’s hard to remain unmoved by the mixed messages of regret, sadness and gleeful anticipation that inhabit Lazaroff’s pages. They speak simultaneously of an irresolvable tension — a trade-off — between the heavy weight of the past and the lightness of the future. But the observation that packed the biggest wallop of them all, at least for me, was articulated by Rabbi Louis Levitsky, who for years had presided successfully over Congregation Oheb Shalom, a Newark landmark since the 1860s, only to officiate at its demise as an urban institution when the synagogue relocated in the late 1950s to South Orange, N.J. Faced with a veritable Hobson’s choice, the Newark rabbi had to decide whether to follow his flock to the suburbs or to stay put, to reconstitute his community or salvage it.

“This, our 97th annual meeting, may be the last annual meeting that Oheb Shalom will hold in this building, which was dedicated only in 1916,” Levitsky sadly told his congregants some 40 years after its dedication, referring to the gleaming white, classically styled, multi-pillared structure on High Street. “As public buildings go, we have certainly not had the full use that we could derive from this.”

But he quickly added that we have to “look ahead… planning from the start, as it were, the life of a brand-new congregation. What would we like it to be? Let us not refer to the past, but look at what we ought to have in a new Oheb Shalom in order to be true to our Jewish tradition and most useful to our role as Jews living under American democracy.”

Gamely invoking tradition and democracy, those twin rhetorical poles of the American Jewish experience, Levitsky did his level best to make it seem as if the congregation’s decision to relocate was a blessing in disguise — an opportunity, rather than a fall from grace.

But for all the rabbi’s cheerleading, a subtle sadness tinged his comments, one that underscored American Jewry’s changing relationship to the city. Once the most stalwart and resolute of urban residents, whose commitment to the metropolis was nothing short of an article of faith, American Jews now preferred to cultivate their own gardens.

Anxieties About Moving to Suburbia