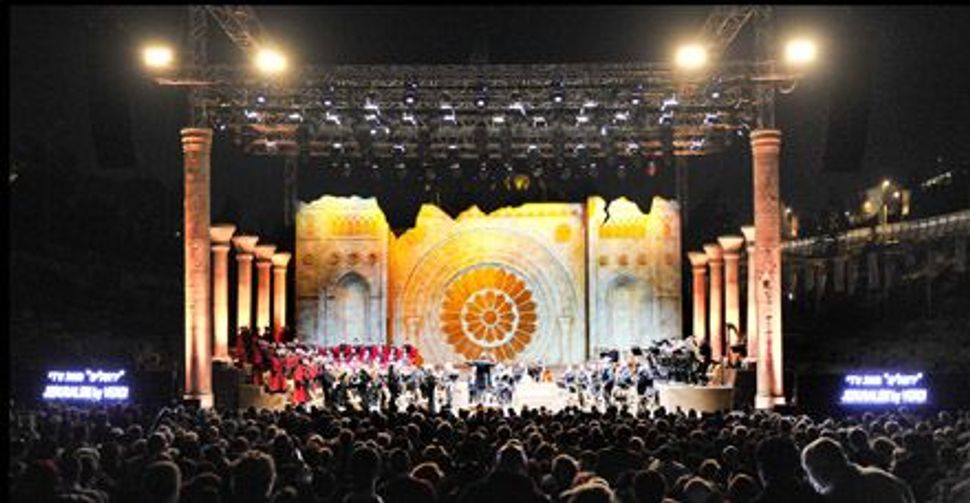 Crusaders in the Sultan?s Pool: Giuseppe Verdi?s 1847 opera is performed in the shadow of the Old City for the first time. The ancient walls of Jerusalem are to the right of the stage. Image by yossi Zwecker

It’s not often that you arrive for a night at the opera to find protesters waving banners and urging you not to enter. But then again, it’s not often that the Old City of Jerusalem becomes a backdrop for an opera about the emotions of crusaders who came here to conquer.

The highlight of the 12-day Masada, Dead Sea and Jerusalem Opera Festival, which began on June 1, was the Israeli Opera’s production of Giuseppe Verdi’s “Jérusalem” — its Holy Land premiere. The opera, which follows crusaders to Jerusalem from Toulouse, France, via Ramle, was performed in the Sultan’s Pool, a historic water basin close to the ancient Jerusalem walls, before an audience of 6,500.

“The opera is giving respect to crusaders, who killed us,” said Jerusalem teacher Yeshayahu Goldenhersh, one of half a dozen Orthodox men who shouted slogans at people as they arrived for the June 6 performance. “They wouldn’t do this for the Nazis. The only difference is that this happened longer ago.”

The protesters could be forgiven for getting the wrong end of the stick about “Jérusalem.” It is so rarely performed that even many opera lovers are unfamiliar with it, but it hardly leaves you nostalgic about the crusaders. The pope’s legate and a gang of French crusaders revere reclusive liar and attempted-murderer Roger as a holy man while withholding mercy or even a fair hearing from our hero, the innocent and love-struck Gaston.

The story starts as the Toulouse nobility is getting ready to crusade to the Holy Land. Gaston is engaged to Hélène, but her uncle, Roger, who loves her, orders Gaston dead. Roger gives confusing instructions to the assassin, effecting an attack on his own brother — Hélène’s father, the count. Roger blames Gaston, who is sent to exile. Riven with guilt, Roger becomes a hermit in Palestine, where Gaston also ends up, albeit as a prisoner.

Eventually Hélène and Gaston reunite in Ramle, and the Toulouse crusaders, led by the count — it turns out he didn’t die at the hands of the assassin — meet and capture Gaston, then plan to execute him. In the end, Roger, mortally wounded in battle, admits his guilt and asks to see Jerusalem one last time.

And with “Jérusalem” Jerusalem-style, there you are, sitting with the Old City ahead of you and to your right. As the crusaders sang of the greatness of the city, the effect was that the place itself, its walls illuminated under a clear night sky, became part of the set. One could imagine that inside the walls were, instead of tourists eating falafels and buying yarmulkes and postcards, crusaders on horses, rushing toward the Church of the Holy Sepulchre. Clever projections onstage meant that the Old City was also used as a fitting backdrop for the scenes in Toulouse and Ramle.

Admittedly, the spell of the staging and performing was quickly broken when, as Verdi’s words “Jerusalem, holy divine city” echoed around Sultan’s Pool, an angry driver nearby decided to accompany the horn in the orchestra with that of his car. “See the beauty of the eternal city,” the crusaders urged each other, as a policeman with a megaphone urged a motorist to get into the correct lane. But these disturbances were a small price to pay for a magnificent setting.

Such a fine tribute to “Jérusalem” is especially welcome, given that this opera — along with much of Verdi’s later work — has been widely overlooked, especially in Verdi’s native Italy. Historically, the reception of this opera was spoiled by the fact that it was originally an extended adaptation of an earlier work. Verdi received the 1847 commission from the Opéra de Paris, but he didn’t have time for a completely new opera. So, his fourth opera, “I Lombardi,” which he had composed in Italian four years earlier, became “Jérusalem” in French.

Despite the changes to the original Italian libretto, the overall plot remained intact and Verdi retained much of the music. Several additions were made, specifically to satisfy the tastes of the French audience, including a love duet containing a horn solo; a large-scale ensemble, or tableaux, and a long ballet. But the changes failed to convince the Italians of the value of the opera.

The June 6 performance was not only immensely enjoyable and a challenge to this Italian view of “Jérusalem,” but also technically impressive. Verdi’s early operas feature more coloratura than the better-known later works, presenting a challenge for the soprano. As Hélène, Ira Bertman, a Latvian immigrant to Israel, ably rose to the challenge, her voice matching the fluidity of the flute.

Scott Piper, an American tenor and New York City Opera regular, performed Gaston. He wowed the audience with his highly moving reunion with Hélène, though during the rest of the opera, one would have expected a more modest and lyrical rendition of his role.

As Roger, Austrian bass Kurt Rydl showed off his full-bodied voice. But he was not well when he performed, and so he faltered on some of the notes. His French was also a little off: He pronounced “Toulouse” incorrectly a couple of times.

Alongside the soprano, the stars of the show were conductor David Stern, who is the Israeli Opera’s music director, and Shai Bonder, who masterminded the video projections.

Stern, a Paris-based American, conducted with energy and authority, unfazed that he and the orchestra were squeezed on the small stage with the chorus and soloists.

The Choir of the Transylvania State Philharmonic, from Cluj-Napoca, Romania and the Israel Broadcasting Authority’s Jerusalem Symphony Orchestra came together seamlessly under his leadership. The fact that the outdoor location necessitated loudspeakers eased the challenge of controlling the balance within the orchestra — but Stern didn’t seem to need the help.

Bonder, an Israeli video designer, faced the challenge of coming up with staging that complemented, but didn’t compete with, the grand surroundings. With a series of impressive projections that appeared 3-D, he managed this, even creating projected crusader flags that flapped in the wind. With the click of a button the audience was transported from a palace in Toulouse to crusader buildings and caves in Ramle and, finally, to Jerusalem.