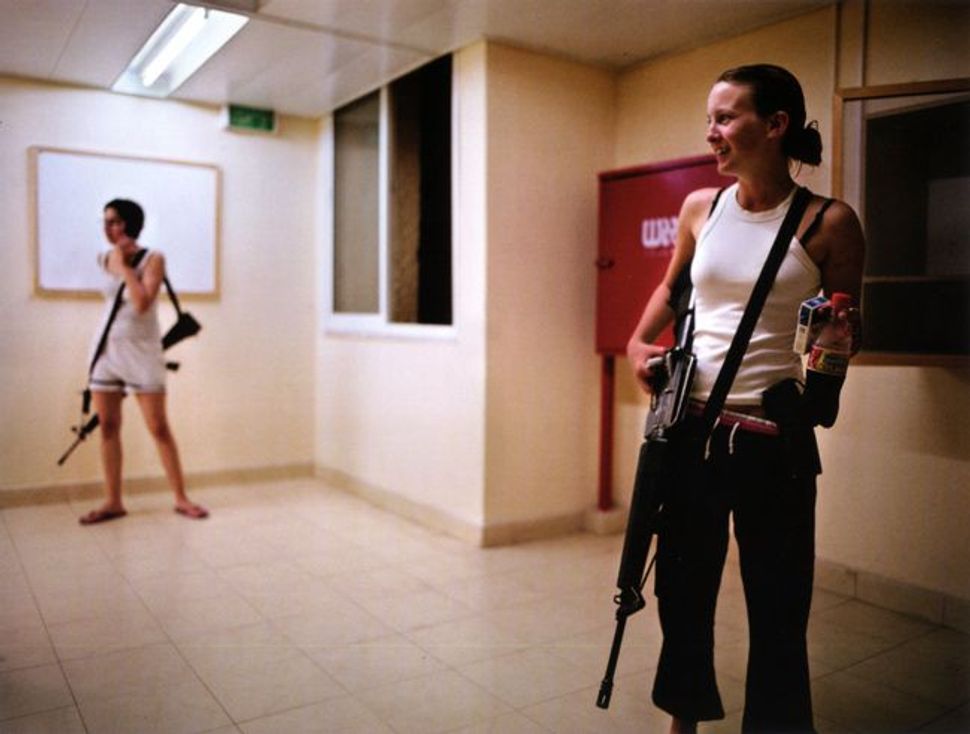 The United Nations Convention on the Rights of the Child proclaims that its signatory states “shall take all feasible measures to ensure that persons below the age of 18 do not take a direct part in hostilities and that they are not compulsorily recruited into their armed forces.” But at the attainment of majority at 18, it is thought, one has already known the best of life, and now it is time, if there would be any, to serve in the military and kill people, and also, in America, to consent to marriage and smoke cigarettes, but not to drink alcohol.

In Israel, 18 marks the age of compulsory military service, and Israel is one of the relatively few countries that compel its women to serve. Rachel Papo was born in Ohio in 1970, and today she lives in Brooklyn. Her book of photographs of female soldiers in the Israel Defense Forces is, in a perverted sense, self-titled: “Serial No. 3817131” was Papo’s identification from her two years with the Israeli Air Force.

Other photographs might frame tensions, but Papo’s are tension incarnate: Their surfaces represent as so domesticated, so mundane, that the viewer is plunged not into art but into noisy and hot Israeli reality. This state is not that of the documentary, though, because the documentary, by detaching its subject from worldly context, ends up specializing the subject, surrounding it in a halo of particularity, or exoticism. Papo’s photographs do the very opposite: They preserve context, however fractious, and so you see these women — young heroines or sanctioned murderers, depending on your viewpoint — mired in the everyday, on leave, ordering fast food, opening a locker and riding a train.

Papo’s images of these unknown, unnamed soldiers are arranged chronologically: Her book begins with induction (“I hereby swear, and fully commit myself, to be faithful to the State of Israel, to its constitution and authorities,” etc.) and continues through to active duty, desert ennui. Accompanying are sparse texts, exclusively quoted remarks from the women or, as above, IDF official verbiage. In the progression of these images, like a column of advancing tanks, Papo shows us time, but no change. Her soldiers’ interchangeable smiles are as ambivalent in basic training as they are after their bearers receive their weapons and learn how to fire them with an accuracy that would shame any words, or photographic representation. On duty, these women accessorize with canteens of water, cigarettes and M-16s. Off duty, the accessories are Coca-Cola, more cigarettes (they all smoke, and their brand is L&M Blue, which could wage an entire ad campaign off these shots) and, always, those automatic weapons, which are to be slept with and even taken into the bathroom.

Papo’s stated motive is to present young women at a crucial time in their developments, pulled from their lives and forced into the unfeminine. But with their awkward fashionista poses and Papo’s glossy lighting, these photographs begin to seem like soft pornography, innocuous in image but lurid and explicit in motive. The origin of that confusion is obvious from only a cursory glance. We’re given every nod to sexuality, and then we’re presented with the utilitarian, the aridly sexless surroundings. Once such tensions are espied, so, too, is the demographic for this project, and the images blur into boredom: Papo’s work is made for an American market, as what Israeli mother would need to look at pictures of a woman who is probably her daughter?

A parting shot: Papo served in the Air Force as a photographer, where she took photographs necessary for technical applications, such as repairs, and also portraited soldiers in promotion ceremonies and the like. We should rather view those shots, seen from the inside and made for the inside, than these, which are observed not just exteriorly but also with an ulterior eye. Of course, those photographs are property of the IDF and disallowed from distribution. It’s still the forbidden — and not the bloody or sexy quotidian — that titillates, no matter how banal.

Joshua Cohen is the literary critic of the Forward.