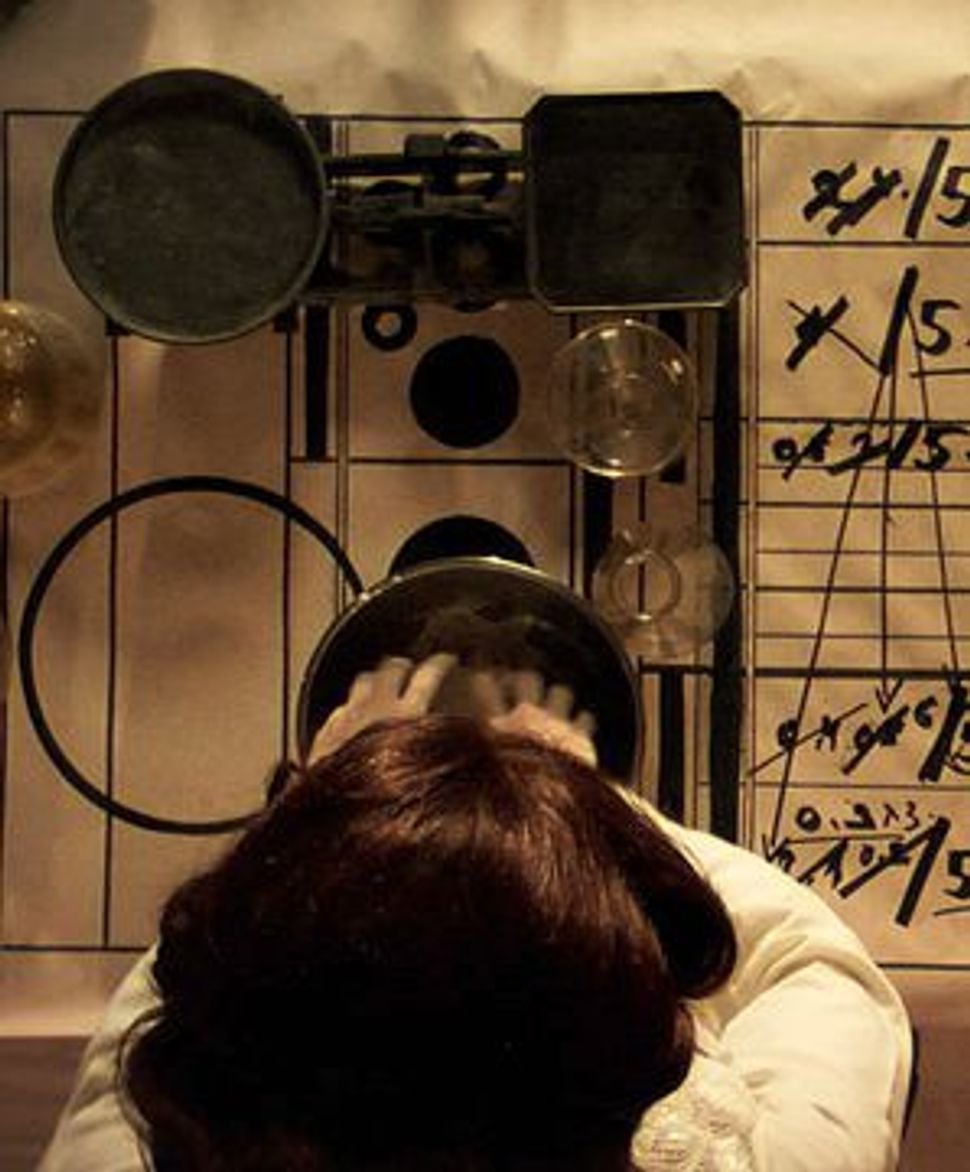 HANDS DOWN: ?I like to think of it as between art and film,? says the 32-year old Zack.

It doesn’t much matter whether “Mother Economy,” the 19-minute film that went on view at New York’s Jewish Museum on July 1, is experimental cinema or video art. This modest exhibition, continuously screening in the 300-square-foot Goodkind Media Center through October 23 and marking the American debut of Israeli artist Maya Zack, is a powerfully imaginative meditation on Holocaust remembrance and on the myth of the Jewish mother. The elaborate set and intricately choreographed narrative, in which a mysterious protagonist methodically documents personal artifacts of absent family members before baking a noodle kugel, is saturated with ambiguous details, inviting layers of interpretation. 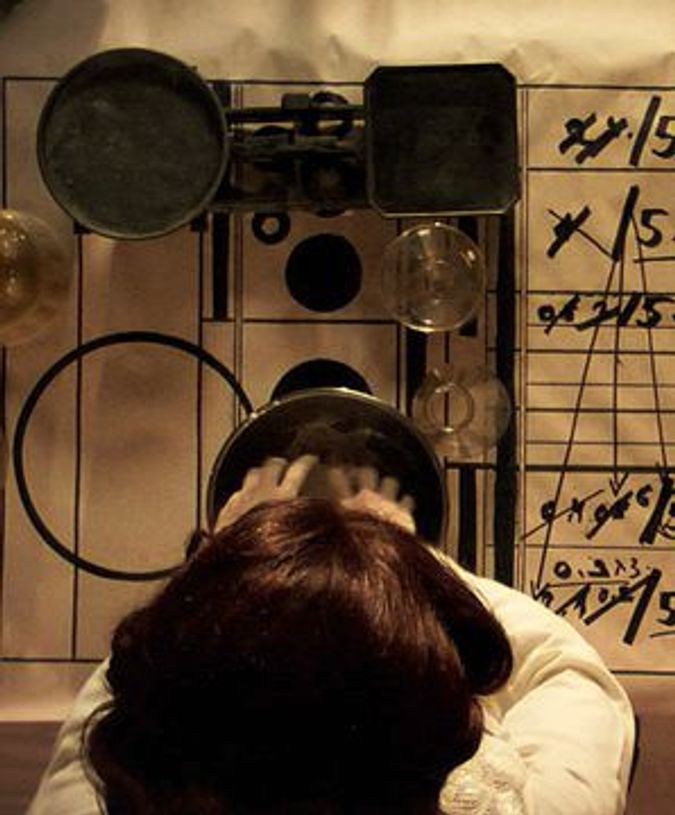 HANDS DOWN: ?I like to think of it as between art and film,? says the 32-year old Zack.

“I like to think of it as between art and film,” said the 32-year-old Zack, who has directed five previous shorts and worked as a production designer on features. She also has created sculptures and drawings that address the ephemeral nature of experience and memory. Originally funded by The New Israeli Foundation for Cinema & T.V.’s “Guilt & Gelt” project, which was mounted by curator Yael Katz Ben Shalom as a group show at the Artneuland gallery in Berlin, “Mother Economy” went on to win Berlin’s Celeste Art Prize. It has since been included in 10 international film festivals, garnered cinematic prizes in Hungary and Ukraine, and is an official selection of the Budapest Short Film Festival, which will take place September 3 through September 7. Still, Andrew Ingall (brother of Marjorie Ingall, the Forward’s East Village Mamele), who oversees the five-year-old Media Center and discovered “Mother Economy” as a member of the selection committee for the New York Jewish Film Festival, felt that “it was such a strong work of art and might have more legs at the museum.”

From the opening shot of the title character, in a long black skirt, white lace-trimmed blouse and apron, stretching a thick piece of cloth through a sewing machine, each poignant vignette draws you deeper into her cocooned existence. The frenetic ticking evokes explosions and trains speeding on tracks, while her stitches suggest a territorial map dotted with blood, scars and destruction. When she rises, she chops a bright-yellow lemon in half and squeezes it in a red juicer — the only vibrant colors in a sea of sepia tones — from which she drinks before wiping the dripping liquid on her chin. But as she braces for the tasks ahead, the radio broadcasts danger, starting with splices of Nazi demagoguery and jumping to English reports of emergency meetings, interspersed with German operettas from the 1920s and ’30s.

Presumably as an antidote to the chaos that reigns outside, the woman, played with doe-eyed intensity by emerging Israeli actress Idit Neuderfer, goes about fulfilling her seemingly irrational chores with utmost precision. Wandering around with a thick black marker — and repeatedly removing and donning her eyeglasses — she traces objects she encounters directly onto the walls and floors, all covered in unprinted pink newspaper. We are meant to believe that these possessions — a stack of books, ballet slippers, a tennis racket, coins that fall from the pockets in a pair of breeches, discarded cigarette stubs and ashes — belonged to the home’s former occupants, captured in sketches by Zack that hang in the background. What happened to the members of this family, and the nature of the protagonist’s relationship to them, remains unclear, however, as does the woman’s frantic cataloging of these objects in a notebook constructed of folded graph paper. Their Jewish identity is implied, though there are only a few explicit signs — most notably, a pair of candlesticks ornamented with Stars of David.

When the woman prepares to bake the kugel, the pace quickens and the film’s title comes to the fore. She computes cryptic formulas on an abacus, gropes for just the right pot and weighs ingredients on an old-fashioned scale, all the while jotting down incomprehensible marks on numerical graphs and charts of household objects that Zack made by scanning and enlarging handwritten illustrations from antiquarian Judaic books and old newspapers. She even uses a large compass and paper measuring wheels to divide her kugel into the form of a pie chart before placing it at the center of an exquisitely set table. This initial concept, developed by Zack and producer/co-writer Yitzchak Roth (an entrepreneur who was her partner at the time), revolves around

the notion of the Jewish family as an economic unit, with the matriarch allocating its resources and dolling out reward and punishment. “There’s this tension between the mother, who is supposed to nurture and on the other hand, she’s this calculating machine,” Zack explains, though this character compels us to look beyond archetypes of the frugal or obsessive Jewish mother, raising the very serious question of Jewish survival in a threatening world.

Music by Ophir Leibovitch, a leading Israeli film composer and founder of the rock band Nikmat HaTraktor (Revenge of the Tractor), adds force to the unfolding drama. So does the crispness of sound enhanced in postproduction, making every footstep register as a thud, each notation with the black marker and crease of the woman’s delicate hands over crinkly paper a stage whisper. The gurgling of poured oil and water, meanwhile, leaves no doubt that the recipe being undertaken is for her pièce de résistance. Yet Zack offers no definitive answers to the central questions of the heroine’s identity and motivation.

“She knows what she’s doing,” Zack insists before readily conceding, “but it is also absurd. She has to master the structure so she can be detached from the outside world and continue living.” This idea was shaped by Zack’s own family history. Her father’s parents, who immigrated to Israel from Czechoslovakia, “were sent to Auschwitz only during the very last phase of the war, but all the time lived under the threat.” A more recent influence was a 2006 visit to her grandmother’s former home in Kosice in present-day Slovakia; a non-Jewish neighbor barred Zack’s entrance, allowing only glimpses from the outside. Whether a dutiful housekeeper maintaining her employers’ home in their absence or a maternal figure who managed to survive, Zack’s heroine is also something of a detective or anthropologist, piecing together imperfect clues from the crime scene, trying to restore the remnants of this broken family.

On a more universal level, “Mother Economy” illuminates, according to Zack, “the way we as humans invent our worlds.” Filming was done in a Golan Heights warehouse because Zack wanted the scene to be “a bit superficial, something constructed in a studio.” In this regard, perhaps more particularly, it holds a mirror to Zack, who lent her protagonist a chunky gold Art Deco ring that she wears regularly. “Every housewife is an artist busy with her installations,” she asserts. (In one of several self-conscious stamps that may go unnoticed, Zack reveals that the first sound bite we hear on the radio, from a CD of German actors reciting famous correspondence, translates, “She is a miserable housewife but a wonderful actress.”)

Ingall also acknowledges an affinity with the heroine: “I think of her as a curator or registrar, constantly assigning values to objects, inventorying, cataloging. This domestic space is her little museum.”

Indeed, the richly textured props that populate the film are, Zack offers, “the main actors actually.” As such, there is an underlying sadness; an element of mourning in the performance of these rituals; a pervasive emptiness, despite the pristine look of satisfaction that sweeps over the woman’s face when she handles, in the finale, her perfectly round kugel. For no matter how many times the film loops, no matter how hard the woman of the house works to maintain order and protect her charges from harm, the family members do not return, the table remains empty, her masterpiece goes uneaten.