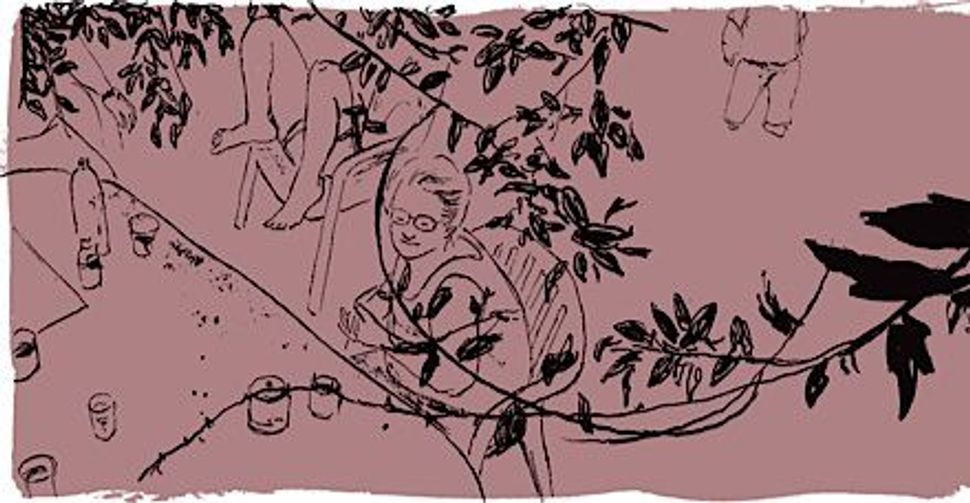 Image by Courtesy of Fanfare Press

Line, Time and Space: A panel from the Seliktars?s graphic novel. Image by Courtesy of Fanfare Press

Why is it that graphic novels are so much more interesting these days than their prose siblings?

It’s not simply because they can be read more quickly and so better accommodate our diminishing, Twitterized attention spans — it’s also because contemporary comics artists seem to care deeply about aesthetic and formal innovation.

Every excellent comic book, and even the occasional half-decent one, invents its own graphic idiom, forging for itself a relationship among line, time and space — between narrative and the page — in a way that novelists haven’t been doing consistently since the heyday of modernism a century ago. There’s just something electrifying about watching artists create original visual grammars tailored to the narratives they have to tell, as sister and brother Galit and Gilad Seliktar do in their lovely “Farm 54,” a series of short graphic stories set in the rural Israel of the 1980s.

Each story begins with a banal moment in a kibbutznik’s teenage years: We see glimpses of a Saturday afternoon barbecue; of a birthday party; of her job in the co-op warehouse, sorting eggs. Four subtle pages distill her first evening in a military camp into a series of almost silent moments in the bathroom and the women’s bunk.

The narratives aren’t just slices of life, though: They build to intense moments in which eroticism and death intersect. In “The Substitute Lifeguard,” the main character, Noga, flirts and experiments with a boy in a swimming pool, and neither notices when her baby brother, unsupervised, falls into the water alongside them. A couple of years later, in “Spanish Perfume,” she asks two boys to help her bury a dog that her mother has run over, and in the process they discover her dad’s porn cache. In the final story, “Houses,” she’s old enough to be inducted into the army, where, on that first night of her service, she’s asked to sub for another girl and accompany a squad evacuating a house of Palestinians. “All you’ve got to do,” she’s told, “is follow the soldiers and make sure they don’t touch the women.” Virtually every page of the book is fraught with the possibility of sex, or violence, or sexual violence.

Juxtapositions of sex and death aren’t anything new, and there’s something in the quiet, detached, sometimes grim tone of “Farm 54” that echoes Rutu Modan’s 2007 graphic novel, “Exit Wounds,” and Nir Bergman’s 2002 film “Broken Wings.” Like those works, the Seliktars’ graphic novel evokes Israel’s military and security embroilments obliquely, mostly through absences. “Spanish Perfume,” for example, takes place while Noga’s father is gone — presumably in Lebanon — and her mother is left to play cards with “Fat Nachum and Limping Shlomo… men that no one wanted in the war.” Though the final story concerns the demolition of a Palestinian house, it focuses on little details and fades to white before the explosion, letting pigeons taking flight from the roof signal the destruction to come. The Seliktars are storytellers who know the subtle power of omission and elision.

Each page is divided into three horizontal, usually borderless, panels, and it’s not unusual for Gilad to change the perspective radically in each panel on a page, to keep the center of narrative action off in the distance or out of the reader’s sight. For instance, in “The Substitute Lifeguard,” while the textual narration has Noga’s mother realizing that her baby has disappeared, and so she’s frantically screaming, “Where’s Amnon? Where’s Amnon?” what the reader sees in the panels are the empty and sedate rooms of the family’s home, where nothing is happening. The effect is unexpected and chilling, a sharp evocation of that feeling of eerie disembodiment that occurs in the first moments of a panic.

If “Farm 54” is more intricate than most contemporary novels, that’s partly thanks to the process through which it was made. Galit, a poet who lives in Princeton, N.J., first wrote these semiautobiographical anecdotes in lyrical Hebrew prose. Gilad, her younger brother, teaches in Jerusalem, at the Bezalel Academy of Arts and Design; he describes, in a series of explanatory notes, how in adapting his sister’s stories to comics, he had to “‘translate’ almost all of the narrative and descriptions into a graphical language.” In doing so, he limited himself to two inks: black, which he applies in fine, precise lines to render detail, and something else, a matte chestnutty color that he washes over pages for shadow and dimness. Working carefully with negative space and a brilliantly Eisnerian sense for panels and pages, he puts this relatively small palette to maximal use, creating a wide range of atmospheric effects.

“Farm 54” was first published in French in 2008, to critical acclaim, and later followed in its Hebrew, Spanish and English editions. Like any literary translation, this one faces a few challenges: Footnotes awkwardly explain what a shiva and a Krembo are, and when the narration says that “the fluorescent light burns cold,” it loses the Hebrew allusion to the burning bush. Still, because so much of Galit’s prose has already been transformed by Gilad into visual images — indeed, many of the most haunting and effective pages here are entirely wordless — “Farm 54” loses less in translation than prose usually does. Which suggests one additional reason that the graphic novel is more the medium of the moment than its prose analog: It travels more easily in our global culture.