Lilka from Telekhany, Lilith From L.A. 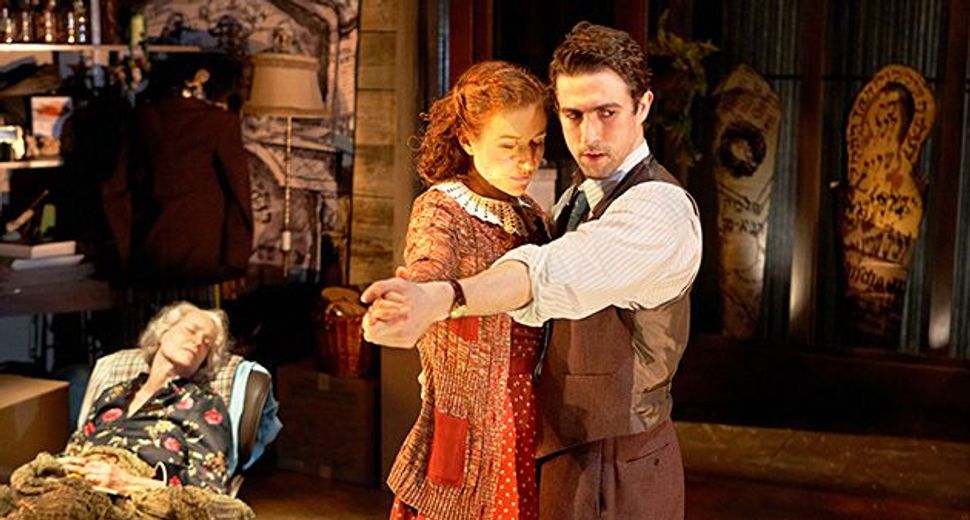 “The Last Act of Lilka Kadison” is a promising yet confounding new drama from Chicago’s Tony Award-winning Lookingglass Theatre Company that touches on the Holocaust, on the loneliness of old age and, explicitly, on the magic of the theater. Inspired by the Jewish short stories in the work of the late radio broadcaster Johanna Cooper, it was created by ensemble member David Kersnar, who wrote it with Nicola Behrman and ensemble members Abbie Phillips, Heidi Stillman and Andrew White.

The play has powerhouse potential. The acting is first-rate, especially by Marilyn Dodds Frank, who plays the sharp-tongued, witty, widowed 87-year-old Lilith Fisher, chair-ridden in her cluttered, contemporary Los Angeles apartment and verbally jousting with her Pakistani aide, Menelik Khan (Usman Ally), sent to her by Jewish Home Services. The theme of our memories haunting our present lives is intriguingly embodied by having Chance Bone play the young Ben Ari Adler — Lilith’s shtetl lover who died during the Holocaust — as well as his ghost, lovingly haunting Lilith in her apartment, encouraging her to tell her story, to release it from the prison of her mind.

Lilith’s hip is broken; her body is frail. She never leaves her chair, but she spouts hilarious one-liners, and her animated presence demands our attention. We want to hear the story that she is concealing and struggling to tell. And yet, for a play that purports to be about the power of stories, particularly Jewish ones, her story turns out to be disappointingly powerless, not least because of what the writers have chosen to be her story.

As Lilith closes her eyes, the ghost of Adler summons up the Polish shtetl marketplace of Telekhany on the eve of World War II. We see Lilith as the young, religiously observant, fresh-faced Lilka (Nora Fiffer), looking to buy some food and meeting Adler, who is the director of a Yiddish toy theater company and seems straight out of the treacly sweet “Life Is Beautiful” school of Holocaust fiction. Adler reads the poetry she has written in her notebook and convinces her to help him write a play, “Solomon and Sheba,” for his theater. She meets with him often in the Jewish cemetery to work on it, and then one day, she hears German tanks, runs home and finds that her family is “gone.” Lilka and Adler escape to a barn, but then he leaves for a moment and is then also “gone” forever, presumably killed by Nazis.

The Lilith we meet has been long silent, keeping her past from even her son. It’s only with the arrival of the ghost of Adler and the pleading of Khan that she feels compelled to speak. We want to hear Lilith’s stories, yet we discover that the story and the secret that Lilith is grappling with is not one about the destruction of her life by the Holocaust, rather, it’s her interrupted life with Adler, with whom she once wrote a play, and who, drum roll, is her son’s true father.

The weak, vague way “The Last Act” treats the Holocaust undermines the play’s emotional heft; it circumvents the traumatic loss Lilith suffered, preventing it from being as haunting as it should be. Specifics of the Holocaust are glossed over: When Lilka hears the tanks, she returns, in tears, to report to Adler that “soldiers were everywhere” and her family is “gone.” Telekhany is a real town in Belorussia, the bulk of whose 2,000 Jews were wiped out in August 1941 by the SS-Einsatzgruppen forces, which arrived on horseback. The suggestion of “tanks” seems more impersonal, not consistent with the terrible facts of Nazi brutality. According to one account, in Telekhany the sound of machine guns shooting Jews could be heard incessantly for two days. The writers chose to set Lilka’s past in an actual town, and yet what happens to the Jews in Telekhany occurs off-stage.

It does not seem the writers’ intent to make this a play that teaches about the Holocaust. Not every play needs to be a history lesson. Yet what is troubling is that the play seems part of a recent trend to use the Holocaust to give a work instant gravitas, to use the Holocaust as backdrop, but not as the subject of the work. These films and novels (“The Reader,” “The Boy in the Striped Pajamas,” “The Book Thief,” “Those Who Save Us”) focus on the private shame and collateral discomfort of the non-Jewish protagonists rather than on the massive industrial annihilation of the Holocaust, the horrors committed against millions of Jews by Nazis. Here, the main character is Jewish, but the play focuses on Lilith’s private shame.

For example, the writers give more dramatic weight to the suffering that Lilka experienced at the hands of her fellow Jews rather than as a Holocaust victim. In one scene, the young Lilka protests to Adler that Sheba would never have married Solomon. Otherwise, “she would be just a good Jewish wife, arranging doilies.” Adler responds, “Well, it seems someone is upset about how their religion treats women.” She takes the bait, saying, “We are not allowed near the ark,” and proceeds to emotionally tell a story about how when she was a little girl and her father had an aliyah to open the ark, she ran up to go see what was in the ark but an old man grabbed her and stopped her. It was “so humiliating. I had to stand there while he talked to God.”

This speech is supposed to be a peak moment where she is describing her humiliation and pain. The audience is hushed as she speaks with great emotion. And yet there is no sense that this personal, private suffering pales beside the loss of her family in the Holocaust. There is no similar speech about how Nazis murdered her entire family, nor any sense that the power of this scene comes from its source in her inchoate loss of the wartime years.

These weaknesses are all the more disappointing, because the play has several moments of wonder in which the magic of theater comes alive. The toy theater is a marvelous artifact, and it is charmingly used in one scene by Adler, when he enacts a story from Chelm for Lilka and when they rehearse “Solomon and Sheba.” The scene, in which the 87-year old Lilith embraces the young Lilka and assures her that “you will survive this,” is a particularly moving and beautiful one in which the writers use magical realism to create a moment of truth onstage.

The final scene, in which the toy theater becomes an ark filled with feathers and then feathers fall from the sky, suggesting that Lilith has held on to her faith and her hope, is gloriously life-affirming. And yet, if we had heard of the horrors of the Holocaust that Lilka must have experienced, how much more powerful would be her grace and redemption in the end of the play and at the end of her life, and how much more miraculous the falling of cleansing, white feathers from the sky.

Laura Hodes is a writer and lawyer in Chicago.

“The Last Act of Lilka Kadison” runs at the Lookingglass Theatre in Chicago through July 24.

Lilka from Telekhany, Lilith From L.A.