Separating the Dancer From the Dance Exchange 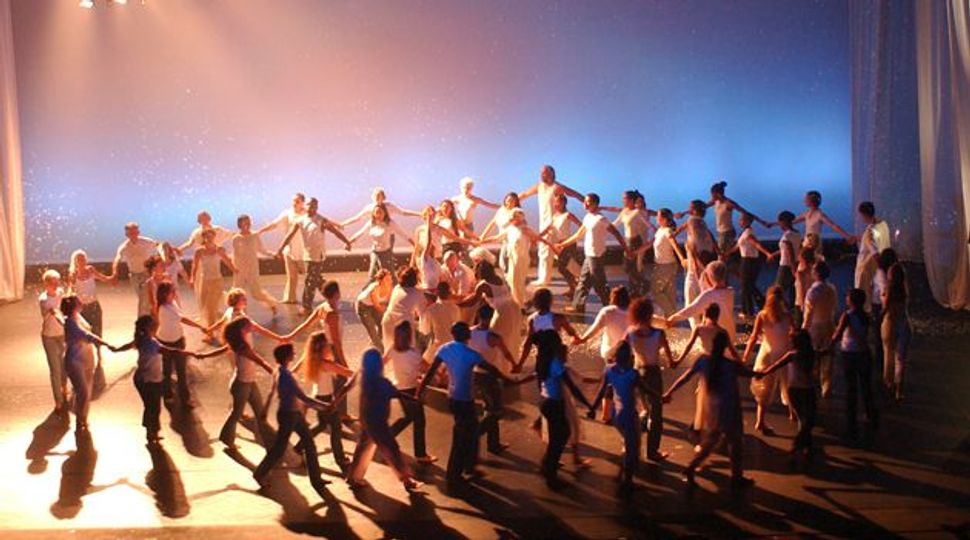 Hallelujah!: This dance project moved around the country incorporating suggestions from audiences as it moved. Image by Stan Barouh

Liz Lerman, long the dominant Jewish voice in the barefoot, rule-breaking world of American modern dance, is stepping down from the Maryland-based company she founded in 1976 to pursue independent projects. That leaves the Dance Exchange — the renowned, multigenerational company she created and guided for more than three decades — under new leadership. Nine-year company veteran Cassie Meador, 31, becomes artistic director on July 1. Will the company, whose six dancers range in age from 26 to 77, retain the Jewish character that has become fundamental to the Dance Exchange ethos?

Over the years, dancer, choreographer, facilitator and now author Lerman, a recipient of a 2002 MacArthur “genius” grant — given for both “exceptional merit and promise” in creative work — made Judaism and Jewish issues integral to her choreographic and educational projects. Beginning in 1977 with “Miss Galaxy and Her Three Raps With God,” Lerman grappled with questions of what it meant to be a Jew in the late 20th century. In that work, which featured Lerman’s trademark large cast of multigenerational performers — some professionally trained dancers, others rehearsed amateurs — Lerman wrestled with God in spoken monologue and dance. Arthur Waskow, an activist rabbi for progressive causes who at that time was a resident fellow at the Institute for Policy Studies, a public policy think tank, performed as a last-minute stand-in for the Messiah. 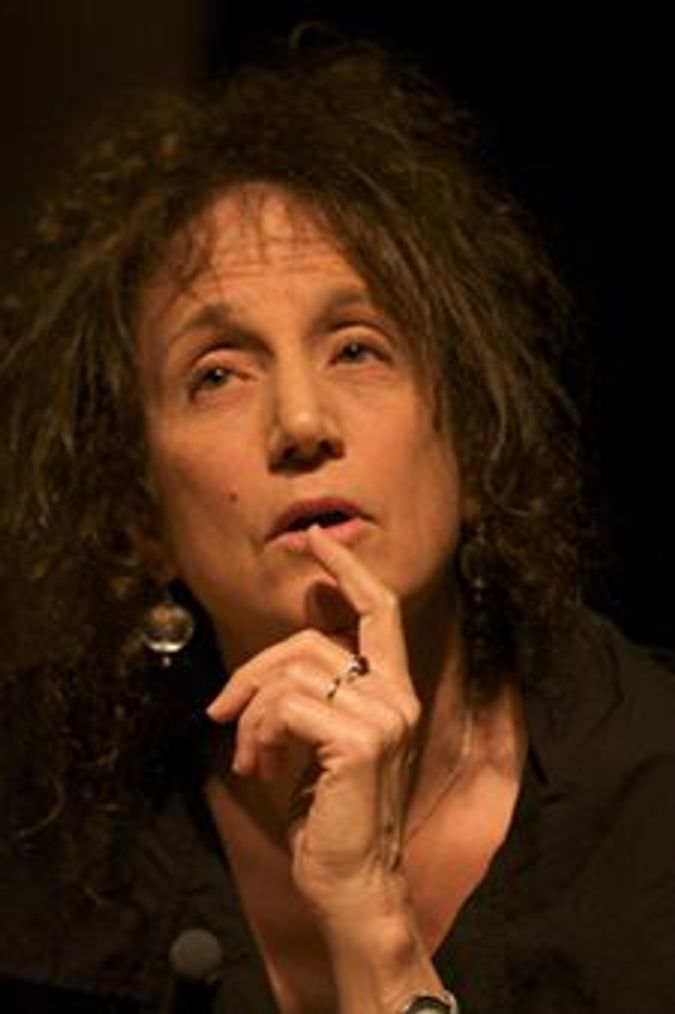 Other distinctly Jewish works included 1986’s “Russia: Footnotes to History,” which delved into Lerman’s Russian-Jewish ancestry and included a page-long bibliography in the program. Over a three-year period in the late 1990s, her piece “Shehechianu,” an expansive fantasia on themes of sustenance and thankfulness, visited stages and synagogue community halls, asking probing questions: What sustains you in troubled times? How do history’s injustices affect the present? Then, the protean “Hallelujah” project traveled to 15 American cities, eliciting contributions from everyday citizens on what is worthy of praise; many of those ideas were incorporated into the piece at various venues.

More recent Jewish-themed works included “Small Dances About Big Ideas,” a searing study of trauma and reconciliation in the wake of the Holocaust. It is based on the Nuremberg Trials and on recurring genocides, including those in Rwanda and Bosnia. As recently as 2010, “The Matter of Origins” investigated scientific, spiritual and cultural origin stories, including a Hebrew reading from Genesis and an in-depth look at scientific theories of the beginnings of the universe, glimpsed through the Hubble space telescope.

“I think there are not enough places in the American Jewish community that are thinking seriously about how to be Jewish in America. And Liz’s work is all about that,” said longtime admirer and sometime adviser Rabbi Daniel Zemel, of Washington, D.C.’s Temple Micah. He once called Lerman “the only true genius I know — and I know some very, very intelligent people.”

Lerman, 63, has frequently worked with Zemel’s Reform congregation, devising ways to bring movement, metaphor and deeper meaning to prayer services and the Hebrew school. She taught rabbinical students at New York’s Hebrew Union College-Jewish Institute of Religion and advised Jewish leaders as part of Synagogue 2000, the national project to remake the way American Jews integrate synagogue experiences into their lives. In 2005, the National Foundation recognized her for Jewish Culture, presenting her with its performing arts achievement award.

According to Harlene Appelman, executive director of the New York-based Covenant Foundation, which funds Jewish educational and cultural projects including those of the Dance Exchange, Lerman “provides a window into Judaism that is not necessarily traditional, but no less rich and no less important. Her work validates and gives credibility to other people’s feelings.” One of her greatest contributions, Appelman said, is her artistry: “The work she produces is always stimulating, beautiful, provocative, and leads one to move to the next level of thought and engagement.”

Rebecca Rossen, a dancer, choreographer and historian at University of Texas at Austin, places Lerman alongside other important 20th-century American Jewish dance makers, including Edith Segal, Dvora Lapson, Sophie Maslow and Anna Halprin. “She works in a long-established tradition of Jewish female choreographers who have worked from a liberal, leftist, feminist perspective and who, through their choreography — as well as, for many, through the diversity in their companies — envisioned in their dancing a multicultural, pluralistic, just, democratic society,” Rossen said.

Vital to Lerman’s work — which often takes place outside traditional theater settings, such as public parks, train stations and, memorably, in a defunct naval shipyard and on the steps of the Lincoln Memorial — have been the explicit and implicit ways she has engaged particularly with concepts related to tikkun olam, or repairing the world, through her choreographic and community encounters. “You could mention any area that would be interesting or relevant to Jews, and Liz’s work has addressed it at some point,” Rossen said. “There are few of her generation of choreographers who are Jewish and who have consistently over time created the wide range of works relevant to Jews or that address Jewishness. A lot of other [Jewish] choreographers do so with one or two pieces.”

On June 15, hundreds of friends and supporters feted Lerman at the American Film Institute’s Silver Theatre and Cultural Center, in Silver Spring, Md., as she moved on to the next stage of her career. With the spring publication of “Hiking the Horizontal” from Wesleyan University Press — a thought-provoking book of personal essays — and an upcoming semester as artist-in-residence at Harvard University, the choreographer will cement her reputation as a public intellectual prized as a speaker, panelist and facilitator for business, religious and educational institutions, as well as for Jewish and arts organizations.

Will her artistic output remain Jewish? Decidedly so. She has begun collaborating with Urban Bush Women founder/choreographer/artistic director Jawole Willa Jo Zollar on a piece about civil rights and the relationship between Martin Luther King Jr. and Rabbi Abraham Joshua Heschel. Lerman told the Forward, “I see myself as continuing to make work with particular Jewish themes, work that is Jewish because I’m Jewish, work that is contextualized by where it started… somewhere in the Jewish community…. I don’t think that’s going to change.”

But the Dance Exchange, the company she founded and used as her springboard for artistic pursuits, will change. “I think that there’s still a place [for Jewish works]… within the organization,” said Meador, the new artistic director, who is not Jewish, though a few core company members, including Shula Strassfeld, who is observant, are.

Appelman isn’t too concerned about Lerman or Dance Exchange. “I do believe that the company will continue to make deep contributions to the world,” she said. “Their dancing, because of its intergenerational nature and deep sensitivity, repairs the world on a daily basis; there’s no question about that. Whether it’s going to be as specifically Jewish remains to be seen. But their approach to repairing the world — I would be shocked if that went away. And for me, that’s absolutely Jewish.”

Lisa Traiger writes on dance, theater and the performing arts from Rockville, Md.

Separating the Dancer From the Dance Exchange