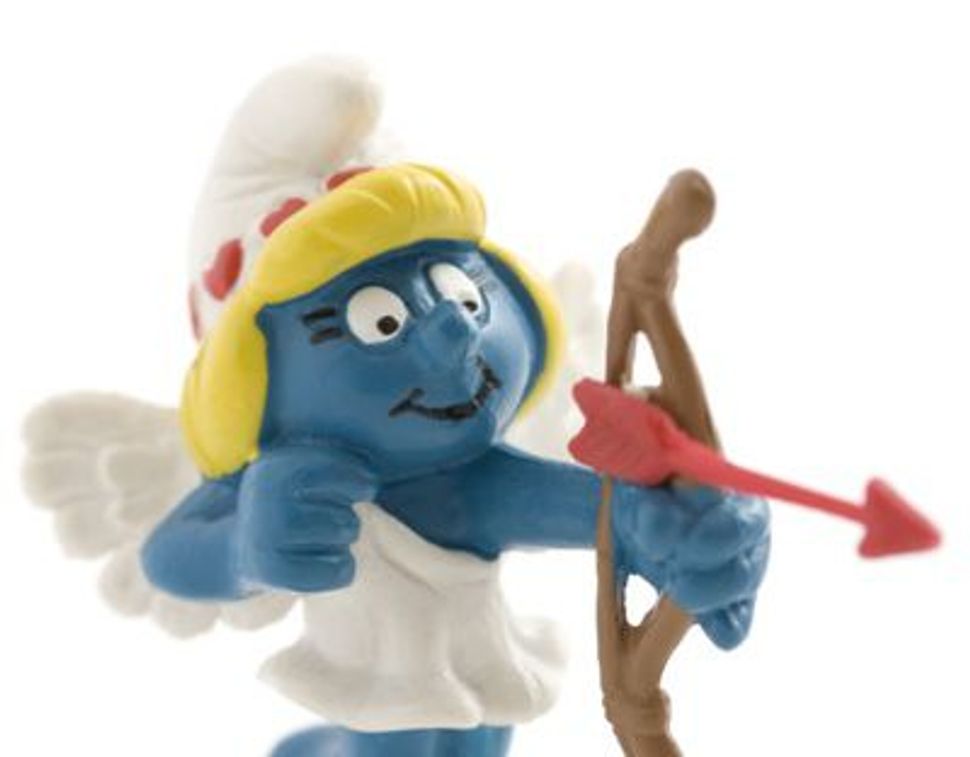 On Saturday, June 25, in more than 12 major cities around the world, hundreds of people are scheduled to congregate, their bodies painted blue from head to toe. No, this is not the filming of the sequel to “Avatar”; rather, it’s a global celebration of the beloved cartoon series “The Smurfs.” The occasion is the birthday of Pierre Culliford, aka Peyo (1928–1992), who created the Smurf characters as a comic strip back in 1958. It’s also a celebration of the forthcoming film that will mix computer generated images with live action smurfs.

Smurf Village is a socialist haven: a kibbutz of sorts. In the Smurfs’ collective, everybody seems to be a happy worker (with the exception of Grouchy Smurf). There is no alienation or exploitation, and the means of production seem to be in the hands of the workers. Religion, as befitting a world without exploitation, seems to be nonexistent. All the Smurfs look alike — white clothes and white pointy hats — and live in identical mushroom-shaped houses. The only exception is Papa Smurf, who wears a Marx-like white beard and is dressed in red.

Within this allegory, the evil wizard Gargamel represents the greedy capitalist. In case you think this is a little far-fetched, his main ambition is to capture the Smurfs to consume them or turn them into gold. Likewise, his pet, Azriel, who is literally a “fat cat,” is obsessed with ensnaring and devouring the little blue workers.

Understanding Smurf Village as a collectivist paradise is an ironic twist on a cartoon that was a favorite on NBC’s Saturday morning lineup during the days of the Reagan administration. But the show’s “adult” topics are not all as utopian as the socialist means of production — consciously or not, Peyo inserted misogynistic and anti-Semitic themes into his cartoon.

For instance, the original village was exclusively a boy’s club. The one female smurf who eventually joined, Smurfette, was more 1950s Barbie than Sandra Day O’Connor, more Pandora than panacea. Despite moments of bravery, Smurfette’s main trait, recognized by her and others in the village, seems to be her beauty. While we don’t know how the Smurfs originated (not, apparently through biological procreation), we do know that Smurfette was manufactured by the evil Gargamel.

And we see, in the episode that shows her creation, how and for what purpose Gargamel made her. She was introduced to bring disorder, envy and jealousy to the collectivist haven: “A ruthless curse that will make them beg for mercy.” Smurfette’s ingredients included “a peck of bird brain… guile of a vixen, the disposition of a shrew… the hardest stone for her heart.”

In using the motif of woman as seductive agent of discord, Peyo was recycling an old story. In the Bible it’s Eve, the first woman, who tempts Adam and brings about the fall of humankind. Like Eve and Pandora, Smurfette tries to bring about the downfall of the Smurfs, but unlike her mythological predecessors, she fails to do so. In the end, Smurfette is transformed by the goodness and generosity of the creatures she tries to destroy. Her transformation is semi-complete when Papa Smurf magically turns her hair, which is black and stringy, to blond and wavy (awakening the blue-blooded libido of the village).

As for the anti-Semitic themes of the show, those are made apparent through the odious character of Gargamel, who, along with Azriel, has a Hebrew-sounding name. In fact, Azriel’s name in Hebrew actually means, “God is my help.” (In Israel, he was simply called “Hathattol,” which roughly translates as “Catty.”) In both Jewish and Muslim traditions, Azriel is the name of the angel of death.

Gargamel, meanwhile, looks like the stereotypical anti-Semitic image of the eternal Jew. He is old, balding with unkempt hair, a big nose and a humpback, and he wears raggedy black clothes. All that Gargamel lacks is a yarmulke. He is, in the tradition of Charles Dickens’s Fagin, a classic example of the ugly old Jew.

Gargamel’s miserly personality and diabolical occupation are also in line with the medieval Christian belief that Jews possessed malevolent magical powers (originating in the New Testament’s claim, John 8:44 that the Jews were children of the devil) and that they would employ those powers to capture Christians and use their blood for ritualistic food. Similarly, Gargamel’s desire to turn the Smurfs into gold is in accord with the belief of some mid-20th century Marxists that the Jewish capitalists (whose God was money) sought to exploit the worker.

Finally, the size of Gargamel’s body in comparison with those of the Smurfs (who stand at three apples high) also adds to his image as the all-powerful Jew. Although in the mind of the medieval Christian, the Jew was not known for his or her impressive physical dimensions, he was nevertheless understood symbolically as a larger-than-life figure — just think of any anti-Semitic cartoon.

Of course, analysing the sources of the Smurfs is an entertaining, albeit sobering, intellectual exercise that pales in comparison with the joyful enchantment of watching the show through a child’s innocent eyes. The traces of age-old bigotry in the images that Peyo used in his creation are unsavoury but, in the end, don’t make the overriding impression. The shortcomings of the Smurfs’ creator are compensated for by the show’s timeless themes of cooperation, caring and peace: After watching the show we all want to be little blue socialists. And that’s the smurfing truth.

Roi Ben-Yehuda is an Israeli writer based in the U.S. His work has been featured in publications such as The Daily Beast, Huffington Post, Haaretz, Zeek and Al Jazeera. He is currently a graduate student at Columbia University, as well as a doctoral student at the School of Conflict Analysis and Resolution at George Mason University. He blogs at RoiWord.