Hitler, the Germans, and the Final Solution 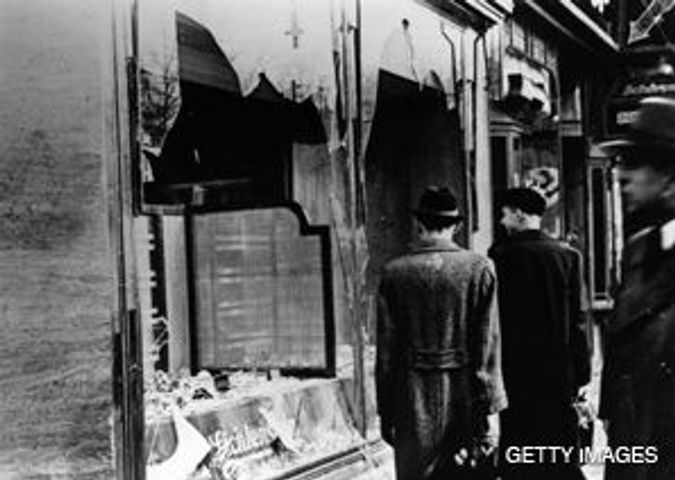 A recent news item in The New York Times highlighted the matter of collective indifference. Time-lapse pictures from a security camera showed a woman collapse onto the floor of a Brooklyn hospital waiting room. Though there were a number of people around, no one tried to resuscitate her or to ask for help. For more than an hour, the woman’s body lay on the ground. People passed by, unaware or unconcerned that a human being was expiring before their eyes. Eventually, the 49-year-old mother of six died of blood clots that traveled to her lungs.

This example of mortal indifference comes to mind when reading “Hitler, the Germans, and the Final Solution,” a collection of 14 essays and lectures by Ian Kershaw, one of Great Britain’s leading authorities on Nazi Germany. The essays cover subjects ranging from German popular opinion in the years from 1933 to 1945 to perhaps the most controversial question informing contemporary Holocaust studies: whether the extermination of European Jewry was something planned far in advance of its actual execution or rather was the catastrophic result of the Second World War. This collection is a handy compendium on the most crucial questions concerning the definitive event of the 20th century, and no doubt will become a vital compilation for anyone interested in the subject.

Kershaw is not only an invigorating presenter and explainer of history, but a conscientious one, as well. “Conscientious” is not a word that one usually applies to pre-eminent experts (whatever their field), who can often get away with making grandiose claims. Kershaw never makes the sweeping sort of generalizations that have been characteristic of some historians’ work on these subjects, from extreme “functionalists” like Rainer Zitelmann, who has argued that the Holocaust was a mere byproduct of the primary Nazi objective of modernizing Germany’s economy, to extreme intentionalists like Daniel Jonah Goldhagen, whose 1997 book, “Hitler’s Willing Executioners: Ordinary Germans and the Holocaust,” alleged that the entire German population was directly responsible for the Holocaust and had been primed for the extermination of the Jews by centuries of state- and church-sanctioned “eliminationist anti-Semitism.”

The thesis of that book, “the indictment of a nation,” in Kershaw’s analysis is shown to be simplistic. “Hitler’s Willing Executioners” became a best-seller in Germany, and the book’s popularity, Kershaw explains, is the result of its crude reductionism; Goldhagen forwards an argument that attributes every aspect of the Holocaust to the German people’s unique antisemitism. Kershaw, on the other hand, takes pains in presenting his interpretation of the available evidence and is not driven by any discernable agenda. Every observation, every conclusion, is couched with qualifiers and acknowledgements of the work of other historians with slightly differing or even contradictory viewpoints.

As devastating as his critique of Goldhagen is, Kershaw is also hard on the extreme functionalists. In a chapter on historiography, he warns against the sort of history that places modernization at the forefront of Nazi motivations, as such explanations “trivialize” the far deeper (and darker) impulses that led to the rise of the Third Reich and “take for granted” its crimes. In particular, he criticizes the German historian Zitelmann, who is unafraid to admit that he finds Hitler’s economic and social ideas compelling and, in a controversial 1987 book, argued that the Führer wisely foresaw many of the dramatic changes that would later characterize mid-20th-century economies. In this sense, Zitelmann argues, Hitler was a progressive leader rather than a backward-looking one, and the murder of millions of German “undesirables” was merely the byproduct — however horrible — of this urgent desire to modernize.

Kershaw grants there’s no reason to doubt that Zitelmann’s intentions are “scholarly and honorable.” Yet the latter’s historicism is reminiscent of the many Marxist and Marxist-sympathizing historians who readily condemned the human rights abuses of Stalinist Russia but attempted to explain them away in the “context” of that country’s worthy attempts to modernize its economy. Throughout, Kershaw is cognizant of the danger presented by those historians who endeavor to compare the Holocaust to other genocides or to argue that it was a feature of Nazi power (an inherent problem with the functionalist approach). These scholars, who have been buttressed in their work by the increasing popularity of “comparative” approaches in political science and sociology, may unwittingly (and sometimes, alas, wittingly) downplay the magnitude of the event. Whatever his “objectiveness,” Kershaw is decidedly against these sorts of interpretations — an understandable response, given his obvious familiarity with the horrors of the Shoah.

Kershaw’s greatest contribution comes in his exploration of how the German people viewed the Nazi agenda and responded to its antisemitic invocations. He reports a meaningful distinction between what the Nazis preached and what the bulk of Germans accepted as truth; the difference in emphasis is attributable to the gap between “the centrality of antisemitism in Hitler’s world view and the apathy towards the ‘Jewish Question’ of the bulk of the population.” What was an ideational, motivating factor of Nazism was something with which the majority of Germans, at most, sympathized. Yet the fate of Jews was simply not their prime concern, especially during the turbulent war years. “Consensus on the ‘Jewish Question,’ if it did exist at all” (and Kershaw makes a convincing case that it did, albeit inertly), “was based on the passivity of the vast majority of the population in the face of the dynamic aggression of a minority.” And while this “minority” may have been relatively paltry at first, as the war bore on it was “growing in size and had the broad backing of the Party and State at its disposal.”

Kershaw defines this perilous situation as an “absence of a choice against evil.” Ultimately, this lays the blame for the rise of Nazism and its resultant horrors on German elites — leaders in politics, the media, the church and other areas of public life — who failed to provide convincing alternatives to fascism and thus allowed for “a collapse of collective moral consciousness and individual civil morality” unparalleled in all of human history. This is a trenchant way of putting things, but it lets regular Germans off easy.

The “indifference” and “passivity” of Germans toward the fate of the Jews — descriptors that Kershaw frequently uses to describe German attitudes — should be interpreted as a point in the intentionalists’ favor. This may seem incongruous. How can the proposition that the majority of Germans couldn’t have cared less about what happened to Jews support the thesis that the extinction of European Jewry was an early, premeditated and animating scheme of the Nazis and their every day supporters? And its corollary, that the German people thus ought to be held responsible for what the Nazi regime perpetrated? Well, in the face of more than a decade of sickening antisemitic propaganda, the knowledge of what German soldiers were doing to civilians (Jewish and non-Jewish alike) on the Eastern Front years before the full brunt of the Holocaust occurred, and the undisguised racism of the Nazi Party ethos — distinguishing between “passivity” and “hostility” to the fate of Jews circa 1933-1945 is to make distinctions without much difference.

The German people possessed a calculated indifference, a temperament the effects of which, at the end of the day, were hardly dissimilar, in any appreciable sense, from the active antisemitism of the most fervid Nazi ideologues. Indifference to the fate of one’s fellow man is bad enough when it occurs in a hospital waiting room. The consequences are far more momentous — both for the victims and their compliant neighbors — when such indifference is reserved for a historically oppressed minority, cultivated via a sophisticated propaganda hate campaign, and implemented by a ruthless state apparatus.

James Kirchick is an assistant editor of The New Republic.