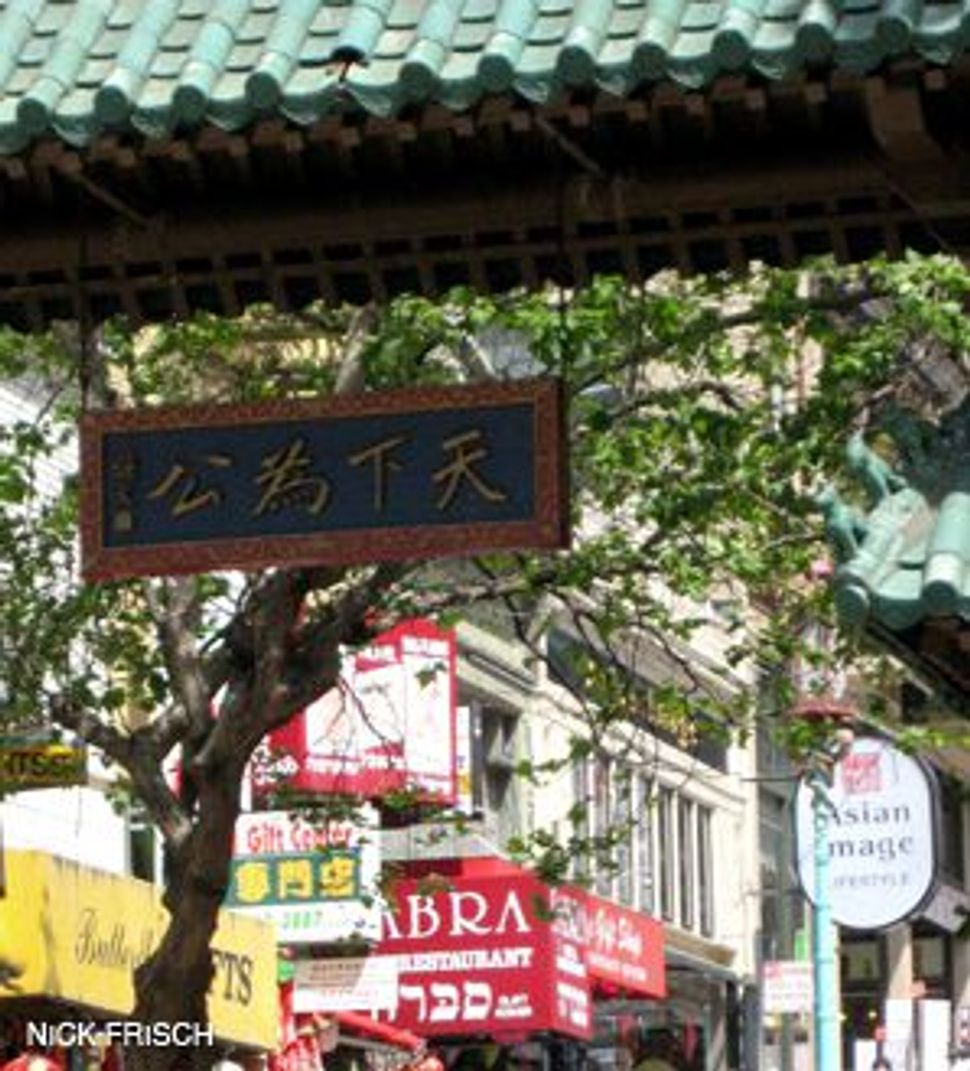 Crossroads: San Francisco, which will host the premiere of an opera based on an Amy Tan novel, is no stranger to Chinese-Jewish intersections.

Presiding over a table stuffed with every imaginable Chinese delicacy, Stewart Wallace appeared very much the Jew at ease: cracking jokes, expertly wielding chopsticks and savoring every bite, his curly hair bobbing about. But this was a Saturday night ritual with a difference: Wallace’s dining companions were mostly Chinese musicians, the main language was Mandarin and the table sat in Beijing. Wallace was on his final trip to China before the premiere of “The Bonesetter’s Daughter,” his opera based on Amy Tan’s novel of the same name. Arrayed around the dinner table were representatives of the multiple cultures and disciplines — art, drama, music, letters — that made the opera into a reality. 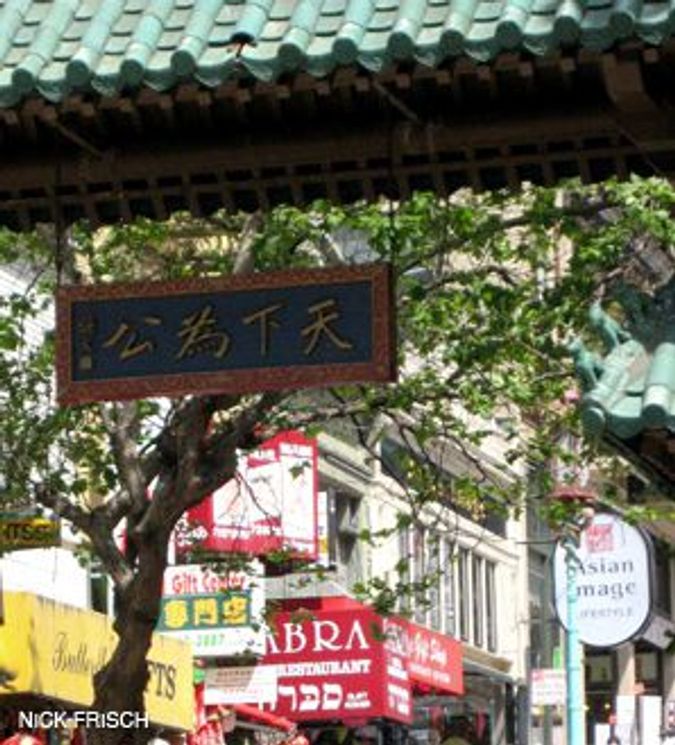 Crossroads: San Francisco, which will host the premiere of an opera based on an Amy Tan novel, is no stranger to Chinese-Jewish intersections.

Already a celebrated opera composer, Wallace faces the highest-stakes creative challenge of his career: When the curtain goes up at the San Francisco Opera on September 13, will the opera’s treatment of Chinese culture avoid the pitfalls and accusations that dog other such transcultural projects? Composers from Debussy to Tan Dun have faced charges of chinoiserie, resorting to such cosmetic flourishes as the pentatonic scale (think the opening notes of “Kung Fu Fighting” or “Turning Japanese”) or token gong bashes to give their music an Asian gloss.

First things first. “This is not a Chinese opera,” Wallace said flatly the month before his final China trip. Sitting in his apartment a block from Manhattan’s Chinatown, he brushed aside questions of authenticity, averring that the opera will first and foremost be true to itself. “You cannot,” he emphasized, “go through the writing process worrying at every step what others are going to think.” And perhaps most important, in searching for a way to give musical life to an American tale rooted in China, Wallace benefits enormously from his own cultural equipment.

Currents of Jewish and immigrant identity run strong throughout his life and work. He wrote an opera/ballet called, “Kabbalah” and the opera “Harvey Milk,” about the openly gay Jewish San Francisco politician assassinated in 1978, which “includes an extended Kaddish at the end, and there’s a real meditation on his sense of heritage, one foot in the Jewish camp and one foot in the gay camp, with these entwined identities.”

In one sense, this latest project marks Wallace’s entry into new terrain — he claims “no prior experience with any Chinese music” before starting the opera four years ago — but in another, the contours of cultural assimilation are familiar to any American with a recent immigrant history. “Amy’s mother was from China, and my grandparents were from the Ukraine. The things I experienced when I read the book, based on Amy’s mother’s experience, resonate with me about my grandparents in a very direct way. My grandmother,” he explained, “told stories that were wildly embellished but had seeds of truth.” In one aria, the Chinese-born mother (modeled on Tan’s own) signals her impending senility with a fanciful eyewitness account of the murders of Nicole Brown Simpson and Ronald Goldman.

Wallace has long been friends with Tan, and recalled that “when the book came out, I composed a little gift for Amy” at the suggestion of mutual friend Sarina Tang, setting the first few lines of the book to three female voices.

The opera follows a condensation of the novel’s plot, borrowing from other Tan material to tell the story of three generations of women grappling with family secrets that span the Pacific. Tan, who ended up writing the libretto, recalled how she was no sooner “flabbergasted… at such a great musical gift” than “I found myself being cajoled by Stewart to do the opera. Is that a Jewish thing — to never take no for an answer?”

Tan is a San Francisco native whose own time in American Jewish milieux surfaces in the novel and subsequent libretto. “Now that I think of it,” she said in an e-mail interview, “most of my friends are either Chinese or Jewish.”

“Amy has had many honorary Jewish mothers,” Wallace said, and indeed her credentials seem impeccable. “My late editor was like a mother to me and inserted herself into every aspect of my personal life,” Tan said. “Her successor was an Orthodox Jew, and the editor I now have at Putnam is also Jewish. We know who spent what for the kosher sushi at those Orthodox weddings.” And on first acquaintance with Jews, “the boundaries are looser. We could jump right into sanitary obsessions, medical maladies and observations about people’s behavior as a reflection of their character.” Last but not least, Tan said, “my agent is Jewish. She was outrageously pushy about my continuing to write fiction until she had wangled the beginnings of a book out of me, which she then sold as ‘The Joy Luck Club.’” The rest, as they say, is history.

Wallace, for his part, has been largely driven by an organic process of absorption and interaction with culture in his composing career (he is largely self-taught) and his Jewish heritage (he was a cantor for his Houston synagogue). Hence the time in China: After an initial 2004 trip at Tang’s invitation, it was the desire “to see the country exclusively through the keyhole of music” that brought him back several more times. From Beijing and Shanghai to the deep countryside, Wallace, Tan and an artistic entourage witnessed an enormous variety of music woven into the fabric of everyday life.

A funeral in Shanxi Province was, Wallace recalled, “probably the single most powerful experience I had in China. Everyone in the village came out, and the music was glorious, dancing, vigorous, wild. At a funeral! There was a welcoming band, and Taoist monks chanting over exploding firecrackers. It reminded me of klezmer wedding music, the joy and reckless abandon.” Wallace responded with his own cultural gift: “I sang the hashkivenu, which I’ve sung for weddings and funerals in the States. They listened attentively in the midst of chaos, and I think they understood that it was meaningful to me and appreciate the gesture.” Wallace called his time in China “an incredible journey, hard to imagine back when I was in junior high in Texas, eating dim sum at a friend’s house every morning.”

And he picked up some help along the way: Six Chinese musicians will be joining the Western orchestra, playing Peking Opera percussion and the shrill, nasal-sounding suona. And he reveals more serendipity: “It was astonishing to see a funeral band made of the same instruments I had intuitively chosen” for the opera.

The composer’s meticulously hands-on approach to the feel and sound of Chinese instruments is on full display in the Beijing rehearsal room where four percussionists rehearse for their San Francisco debuts. Wallace follows every click, snap and crash with talmudic intensity; score flat open on the table, followed and marked with a pencil, he even looked like a yad-toting bar mitzvah boy reading Torah. Most communication happens on an intuitive rhythmic level: Wallace usually conveys what he wants by pointing to a measure and emphasizing “da da da da da.” Li Zhonghua, the lead drummer, seemed unfazed by percussion-only rehearsals that stretch on for hours and hours: Wallace’s “attention to detail,” Li said, “is incredible. He has spent so much time with us, learning the sounds and rhythms,” most of which are semi-improvised and unwritten in the Chinese musical tradition. Journalist and critic Ken Smith, who has written a book on the opera’s creative process, summed up Wallace’s efforts as the result of “slow cooking, not a stir-fry.”

In all of China, you will never find a restaurant serving General Tso’s Chicken; but the Chinese-American concoction is totally authentic on its own terms. Like a meal at Empire Szechuan, “Bonesetter’s” will provide Chinese-inspired source material with a flavor and context that in the end is thoroughly American. “Americans might look at this and think it sounds Chinese,” the composer said, “but Chinese people will hear how it sounds American.” It will, like General Tso’s Chicken, be “true to itself.”

Nick Frisch is an Asian-based writer who has lived in Beijing, Hong Kong and Taipei.