Out and About: Israel’s Adam Yekutieli Puts a Fresh Spin on Street Art 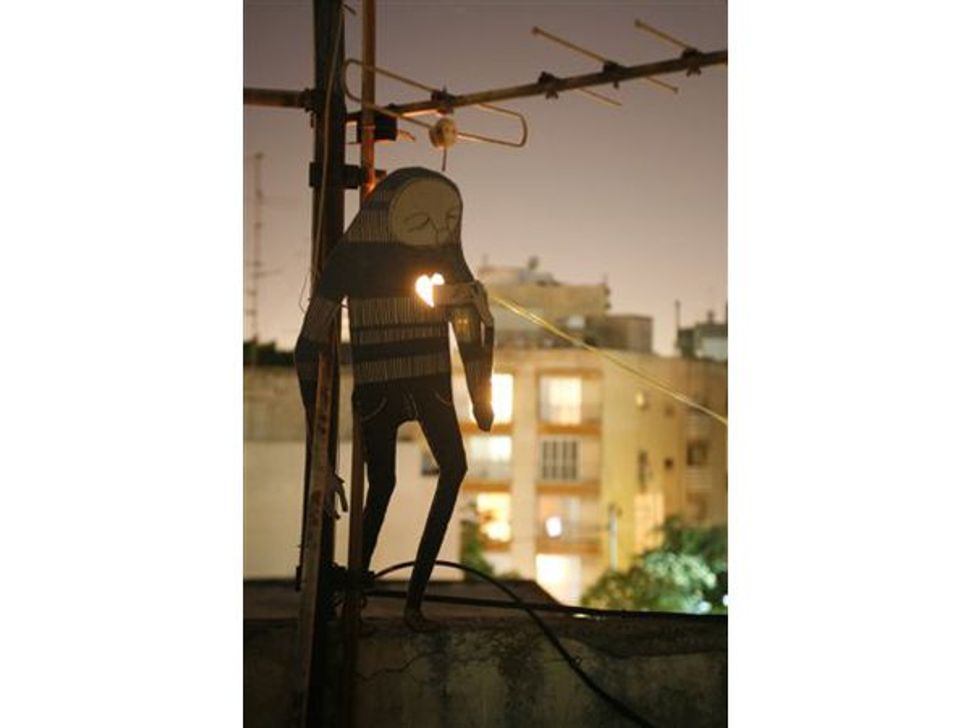 There isn’t much about Adam Yekutieli’s street art that is immediately distinguishable as Israeli, and in fact his fanciful and compassionate drawings and phrases go against much of what most would recognize as Israel’s characteristically macho culture. Yekutieli is best known by the street tags “Know Hope” and “Please Believe” — phrases that line the boulevards of Tel Aviv and other Israeli cities, and ones that Yekutieli is currently bringing abroad through a summer tour of New York, Los Angeles, London and Stavanger, Norway. 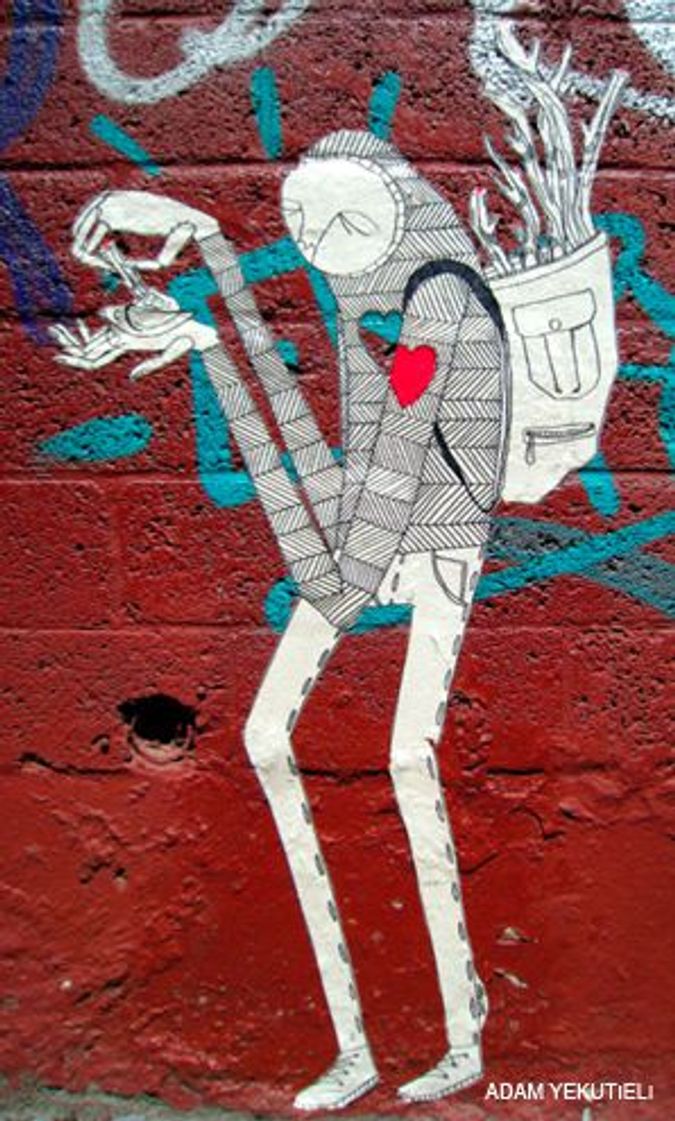 EASY ON, EASY Off: Yekutieli will affix his trademark character (above) onto walls and other surfaces with double-sided tape.

Yekutieli’s whimsical personification of urban objects, such as electrical lines holding hands and speaking light bulbs, calls to mind Dr. Seuss or Shel Silverstein, but his often cryptic messages — such as, “This is for the homeless hearts and anxious fingers,” or, “These every-day breaking points bear minor symphonies” — veer much more toward solemnity.

“I want to address the human conditions that compose the political and social issues that you see in a lot of other street art,” Yekutieli told the Forward.

Yekutieli was born in Huntington Beach, Calif., in 1990, and as a young boy he moved to the Tel Aviv suburb Ramat Hasharon with his parents, who are both professional artists. He attended an arts high school, but he describes his post-high school move to the city of Tel Aviv as the real beginning of his work.

Though Yekutieli began by spray-painting and posting long blocks of text, he has come to prefer a “less bold” aesthetic that solidifies his message into shorter, more easily read bites. About two years ago, he started what he calls his “library project,” in which he pasted drawings and phrases on the street with double-sided tape, inviting removal. On the wall behind the pieces, Yekutieli wrote, “I let you borrow my heart for a while but others borrow it as well.”

In the past year, Yekutieli has worked almost exclusively on site-specific installations that bring his “character” — as he calls the figure at the center of his work — to life in cardboard 3-D. In these installations, the character interacts physically with the surroundings, climbing across Tel Aviv’s landmarks or feeling out crosswalks as if they were Braille.

“I’m trying to create a common moment with the viewer,” Yekutieli said. “It’s a misconception that people think my work is expressing despair…. In a good way, I am trying to express all the aspects of our environment that are temporary and fading away.” When Yekutieli sets up installations, he says, he takes photographs immediately, because they will be gone in minutes. “And I’m all right with that…. I’m creating full stories in real time.”

Asked about how specific his work is to Tel Aviv and Israel, Yekutieli notes that all art made in Israel has “an automatic political layer” and that the moments he portrays are certainly rooted in a geographic context. He does not, however, see his core themes as necessarily Israeli — and certainly not as Jewish. “I’m starting to realize that I don’t see myself as connected to any country,” he said. “I am primarily an external observer” — a point of view that certainly plays itself out in the often lonely and distant themes of his work.

“I identify with the intentions of political street art, but this location is so political that if you do anything overtly political, it gets washed down by the context,” he said. “I think that to be meaningful, the political should relate to the everyday: Everyday life is the most subversive thing, because everybody can relate.”

Yekutieli’s character has certainly gone through his share of “everyday” experiences. Throughout a series of images around the city, viewers have watched the character — literally — give away his heart, have it sewn back on his sleeve by his bird companion, have his arm cut off and engage in other symbolic misadventures.

Yekutieli has gotten a range of viewer reactions to his work, from copycat tagging to writing back, thanking him for creating a particular human connection. He also has been in touch with artists around the world who are interested in collaborating with him.

His work will be on display through the fall season, at the Carmichael Gallery in West Hollywood, Anno Domini in San Jose, The Gallery on Cork Street in London, the Nuart Festival in Norway and wherever else it appears — that is, for the moment.

Leora S. Fridman is a writer and educator living in Boston.

Out and About: Israel’s Adam Yekutieli Puts a Fresh Spin on Street Art