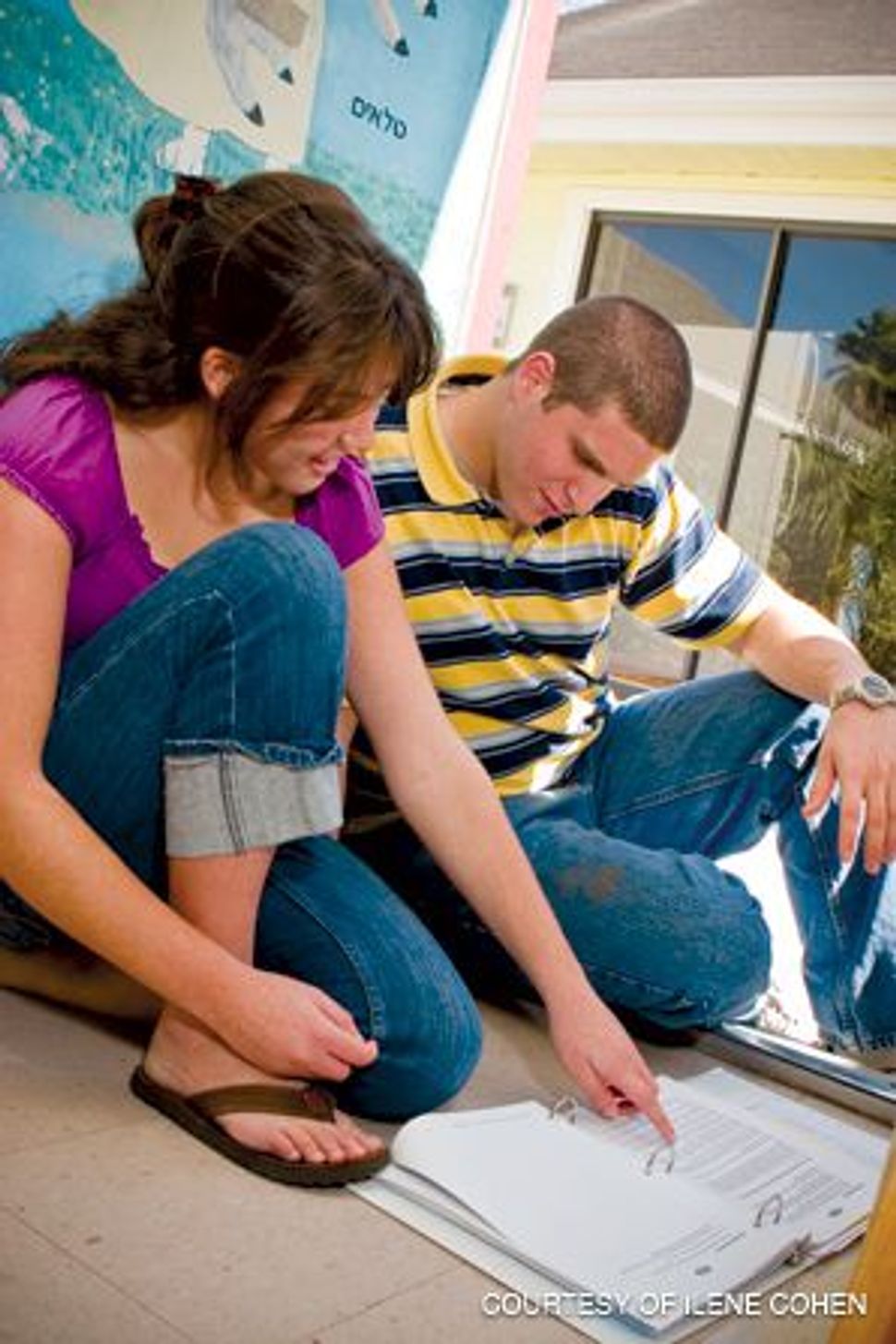 TEEN SPIRIT: Consultant Jane Shapiro said, ?You can?t dictate kids? religious beliefs, and that?s not the role of a Communiteen school, but you can tell kids that Judaism is an ancient wisdom tradition.?

A high-school program that builds upon the success of the Florence Melton Adult Mini-School, one of the largest networks of Jewish adult education, is helping to keep Jewish teenagers connected to their faith and heritage. 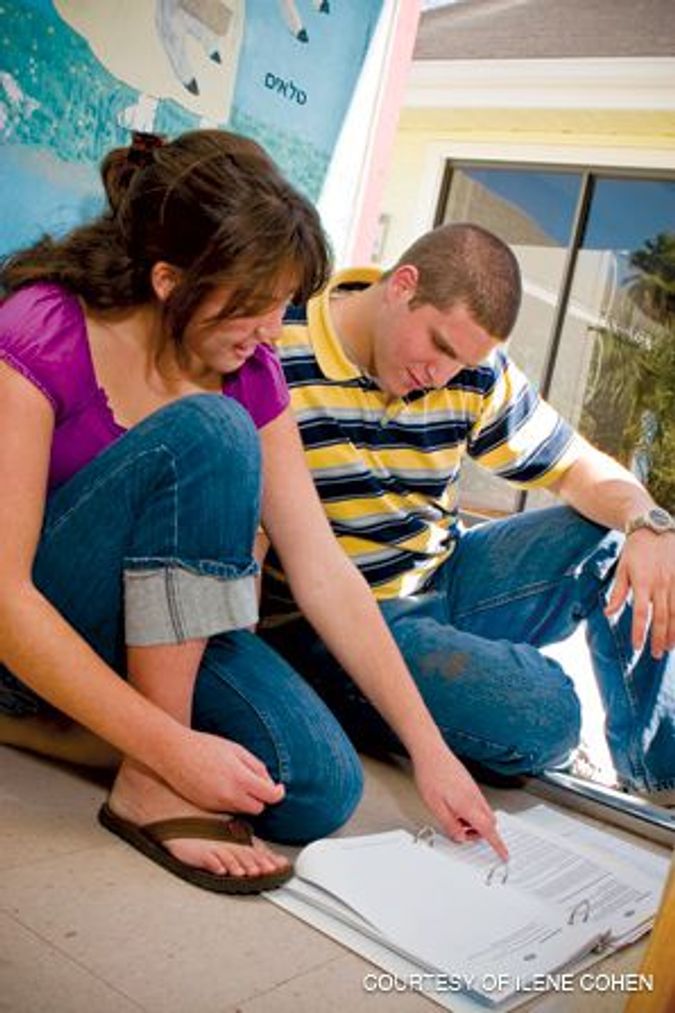 TEEN SPIRIT: Consultant Jane Shapiro said, ?You can?t dictate kids? religious beliefs, and that?s not the role of a Communiteen school, but you can tell kids that Judaism is an ancient wisdom tradition.?

The Florence Melton Communi-teen High School — named after the late Florence Melton, a pioneer in Jewish education — encourages high-school students to explore their Jewish identity in a nondenominational, pluralistic and discussion-based environment. Students attend one day a week to discuss everything from ethics, the environment and money to intermarriage, the role of women in Judaism and the Arab-Israeli conflict.

“The concept is to take formal education blended with experiential Jewish education and put a very large focus on social and emotional learning,” said Evan Segal, chairman of the board. “Teens are smart. They don’t want to be told what to think. They want to understand the information and come up with their own thoughts.”

In 2003, the Florence Melton Communiteen High School launched as an experiment in Columbus, Ohio, after Melton recognized that Jewish education aimed at teenagers was not working. In 2006, it opened as a formal pilot program in Columbus, Chicago and Pittsburgh, and has since expanded to Sarasota, Fla., with plans to expand to a number of additional communities by 2009. Last year, Communiteen began a one-year collaboration with Brandeis University to initiate long-term research into the effectiveness and impact of the program, and to work on curriculum revision and on professional development for teachers and staff.

In Melton’s view, the establishment of the Communiteen high school was a way to address the decline in Jewish engagement from the bar and bat mitzvah years through high school — the years when many lose interest in their connection to Judaism and instead turn their attention outward to their secular lives.

According to a 2000 study conducted by Brandeis’s Cohen Center for Modern Jewish Studies, participation in formal and informal Jewish education declines steadily after a child reaches age 13.

The study found that an almost universal participation in sev-enth grade drops to 72% in eighth and ninth grades. Participation levels off at 69% in 10th and 11th grades, and by 12th grade it declines again, to 56%.

This teenage demographic was exactly where Melton concentrated her efforts. In her vision, the Communiteen high schools would be a way to reverse the trend.

After conducting focus groups with teens in Columbus before her death in 2007, Melton concluded that using the adult mini-schools as a model — with discussion-based, pluralistic settings to explore Jewish questions of ethics and identity — Jewish teens could re-engage with the community and come out as more informed and interested young adults.

“You can’t dictate kids’ religious beliefs, and that’s not the role of a Communiteen school, but you can tell kids that Judaism is an ancient wisdom tradition that has something to say about the concerns of life,” said Jane Shapiro, a consultant on the project.

Each school runs for two years and is divided into three courses. One course, “The Big Ideas of Being Jewish,” is taught over two years and explores such ideas as the treatment of animals, the environment, sex and body image, using a mix of ancient and modern Jewish texts. Another course, “The Jewish American Experience,” looks at the historic experiences of Jews in American history, and often uses movies or other visual aids to relate them to the experiences of modern-day teenagers. The final course, “Why Israel?” focuses on the importance of Israel in the Jewish experience. In discussions, students explore Israeli culture, the history of the state and the Arab-Israeli conflict.

At Communiteen, there are no tests or homework, and classes are centered on what the teens are interested in pursuing. Often, discussions reference what is going on in the news.

Mike Fliegel, who teaches “The Big Ideas of Being Jewish” in Columbus, makes sure to create an environment in which students feel safe to express their thoughts and opinions. That, he said, is one of the central philosophies of Communiteen. “They take different opinions, they challenge each other,” Fliegel said of his students. “It’s almost like being in a dialogue with each other.”

Stephanie Mandelblum, 16, of Sarasota, said she looks forward to going to Communiteen every Sunday, because it is a chance to see all her friends. Though most of her classmates did not know each other when the program opened last September, they have since become close. In class, that leads to lively discussions.

“We were a bunch of really opinionated people, so we would end up with a debate or a discussion,” she said. “Most of the time it would be between the students, and you would really be surprised how much you could apply modern-day current events to whatever we were learning.”

Linda Kupfer, site director of the Chicago Communiteen schools, said that creating an informal, relaxed classroom environment is an important aspect of the program. “It’s very crucial that people are able to open up and feel comfortable sharing,” she said. “What happens in Communiteen stays in Communiteen.”