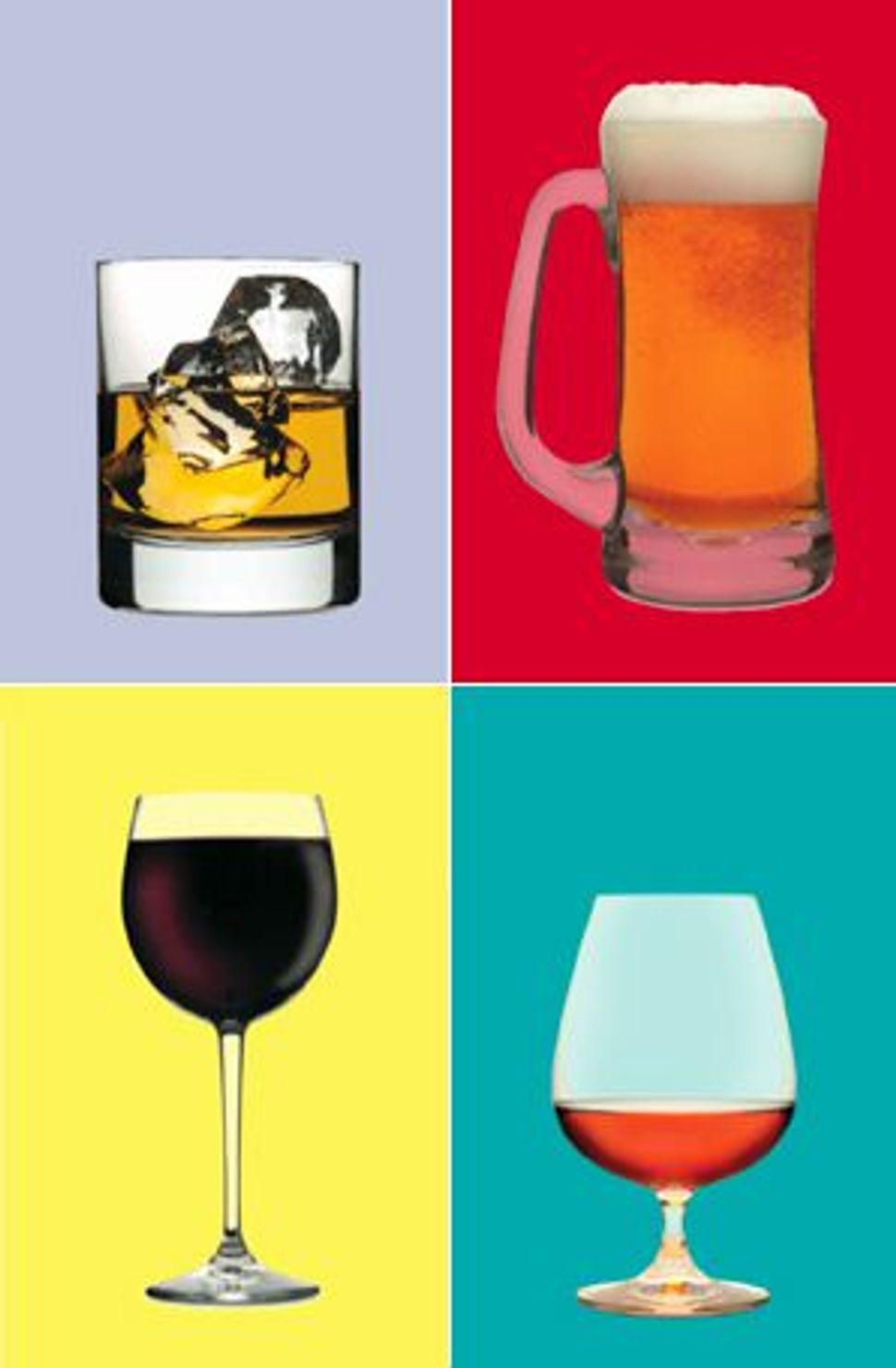 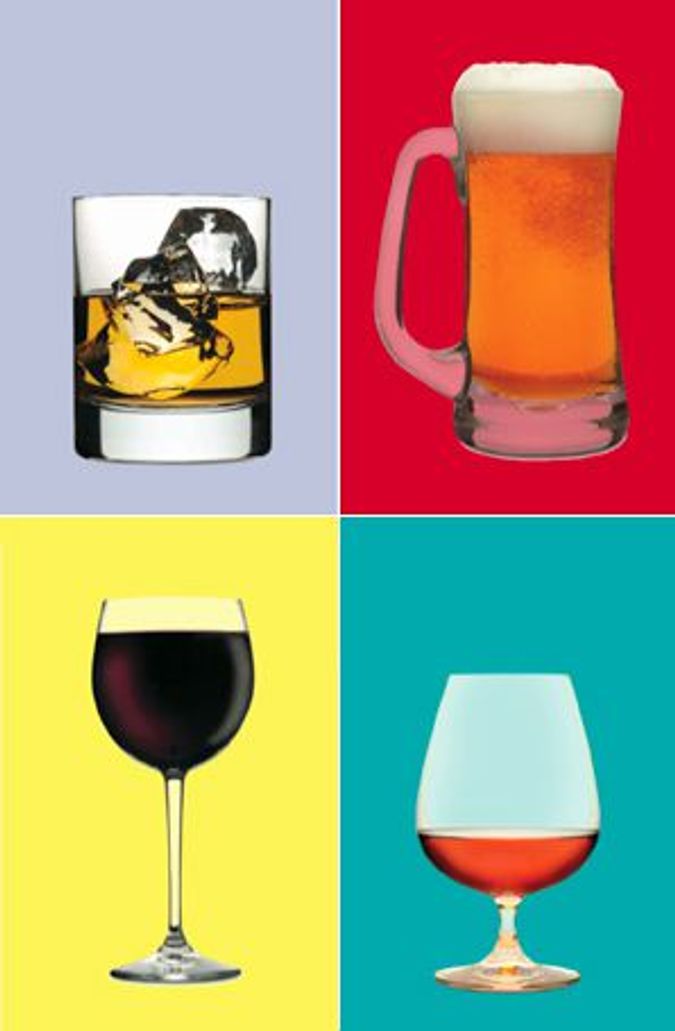 It’s a case of life imitating rhetoric. The original meaning of the phrase “Jews don’t drink” was not that Jews abstain. It didn’t even mean that Jews don’t get drunk. It meant that Jews don’t stay drunk: they don’t drink to the exclusion of all else, and such drinking as they do isn’t an end in itself but an accompaniment to other activities, often quite pious in nature. The synagogue kidesh is a perfect example — first you pray, then you refresh yourself with a drink.

A similar drink taken after a study session or synagogue service (generally in the afternoon or evening) is called a tikn, from the Hebrew tikkun, which otherwise means “correction, repair, improvement, purification.” The soul of a dead person is supposed to be in a continual state of tikkun or purification, rising higher in heaven each year on the anniversary of its death. Hasidim initiated the custom of taking a drink — according to opponents of the movement, virtually every custom initiated by hasidim involves taking a drink — to celebrate the tikkun of the soul in question and even help it along on its way. The idea of trinkn tikn, drinking to the improved fortunes of the deceased, caught on quickly and widely, in part because of its unfailing utility: every day is the anniversary of somebody’s death, every day has a least one soul in need of tikn.

Cart and horse were rapidly confused (probably because no one was sober) and the drink itself came to be seen as the vehicle of the tikn * rather than its adornment, as the cause instead of the effect. This, of course, made drinking even more important — gotta move those souls on up a little higher — but note where the boozing took place. *Tikn * was drunk in a synagogue, not a tavern, and no matter how many drinks a given individual might decide to take, he still had to fulfill his synagogal duties — whatever those might have been — before he could have even one. Not only that, but the *tikn was never drunk alone; half the point of the drink — or of the justification for the drink — is that there be someone else with you to affirm the invariable toast offered at all tiKOOnim (that’s the plural):

But why let someone else have all the fun? The custom of drinking tikn was rapidly extended from a YOORtseit (anniversary of death) custom to a more general one. Anyone with anything to celebrate, anyone returning from a journey, any stranger in town or visitor to the synagogue, brings tikn-gelt, best translated as “booze money,” so that all can answer the lekheiyim with its only recognized response:

a phrase that returns the blessing to a life that’s considerably less than everlasting. Whatever kabbalistic overtones a phrase like

might once had had, they’ve long since been drowned in a torrent of hooch.

So, to reiterate: it isn’t that Jews don’t drink, it’s that Jews don’t drink without a pretext, and there was once no such thing as a Jew who couldn’t come up with one. The generations have grown weaker, though, so weak that many Jews today no longer understand the meaning of the phrase. They have fallen into a trap in which no real Yiddish-speaker ever gets caught: that of taking words at their face value. The priggishness with respect to alcohol seen in so many middle-class Jewish homes has a great deal to do with the fact that the religious activities with which so much drinking was associated have fallen by the wayside (and in the traditional Jewish world, weddings and other such festivities are celebrations of mitsvehs, not life-cycle events). If you’ve never seen a chapter of the Mishna, you can’t have a drink to celebrate having studied it. If you don’t know what the traditional blessings are, you can’t appreciate their presence in informal Yiddish speech. Look at the three most common ways of saying “have an alcoholic drink” and their literal translations:

Shakl is the Hebrew and Yiddish name for the blessing that’s recited over food not covered by any other blessing and drinks that have not been made out of grapes:

Blessed art Thou, O Lord our God, King of the Universe, by Whose word everything has come into being.

Inviting someone to make shakl with you means that you’re asking them to have a drink; a plate of chopped herring or a glass of iced tea will get you nothing but contempt. Koyseh, a Yiddish form of the Hebrew word for “cup,” carries very strong scriptural and ritual resonances: we drink four koyses of wine at every Passover seder.

Makhn a shnepsl looks pretty parveh beside sayings like this, but as the proverb has it:

The Yiddish vocabulary for types of alcohol is fairly direct:

SHNAPS
liquor, whiskey; any alcoholic drink that doesn’t fit into any of the other categories (tequila is considered shnaps, not bronfn).

Jews drink. They get happy. They even get drunk. SHIker, the most common word for “drunk,” can be both an adjective and a noun:

Other ways of describing the same condition are:

Begilifin describes a state not unlike that in which James Stewart, as Elwood P. Dowd, spends most of his time in “Harvey” — just remember that rabbits aren’t kosher. Batrinkn is pretty much equivalent to shiker, but is somewhat more clinical. Mooleh has a literal meaning of “full,” while farshnoshket describes a state in which the drinker is demanding that the band play “Melancholy Baby” while he weeps into someone else’s beer.

A person who’s “under the influence” for both legal and descriptive purposes can be described as meVIsem, intoxicated; an intoxicated person is meVIsemdik:

Mevisem can also be used of other intoxicating substances. As Ray Charles would have sung on “Modern Sounds in Yiddish and Western”:

The single most Jewish liqueur ever known — at least back in my youth, when it was all the rage with the ladies who bar mitzvah — is Cherry Heering, a brandy-based cherry liqueur with a name that inspires confidence at any event at which Yiddish might conceivably be or have been spoken. Real cocktails, though, have never been developed. There is but one:

Alter Kaker (invented by Paul Lewis of the Joffrey Ballet)

Michael Wex is the author of “Just Say Nu:Yiddish for Every Occasion,” “Born To Kvetch” and “The Adventures of Micah Mushmelon, Boy Talmudist.” He blogs at www.michaelwex.com