Viewing School Through a Biblical Lens 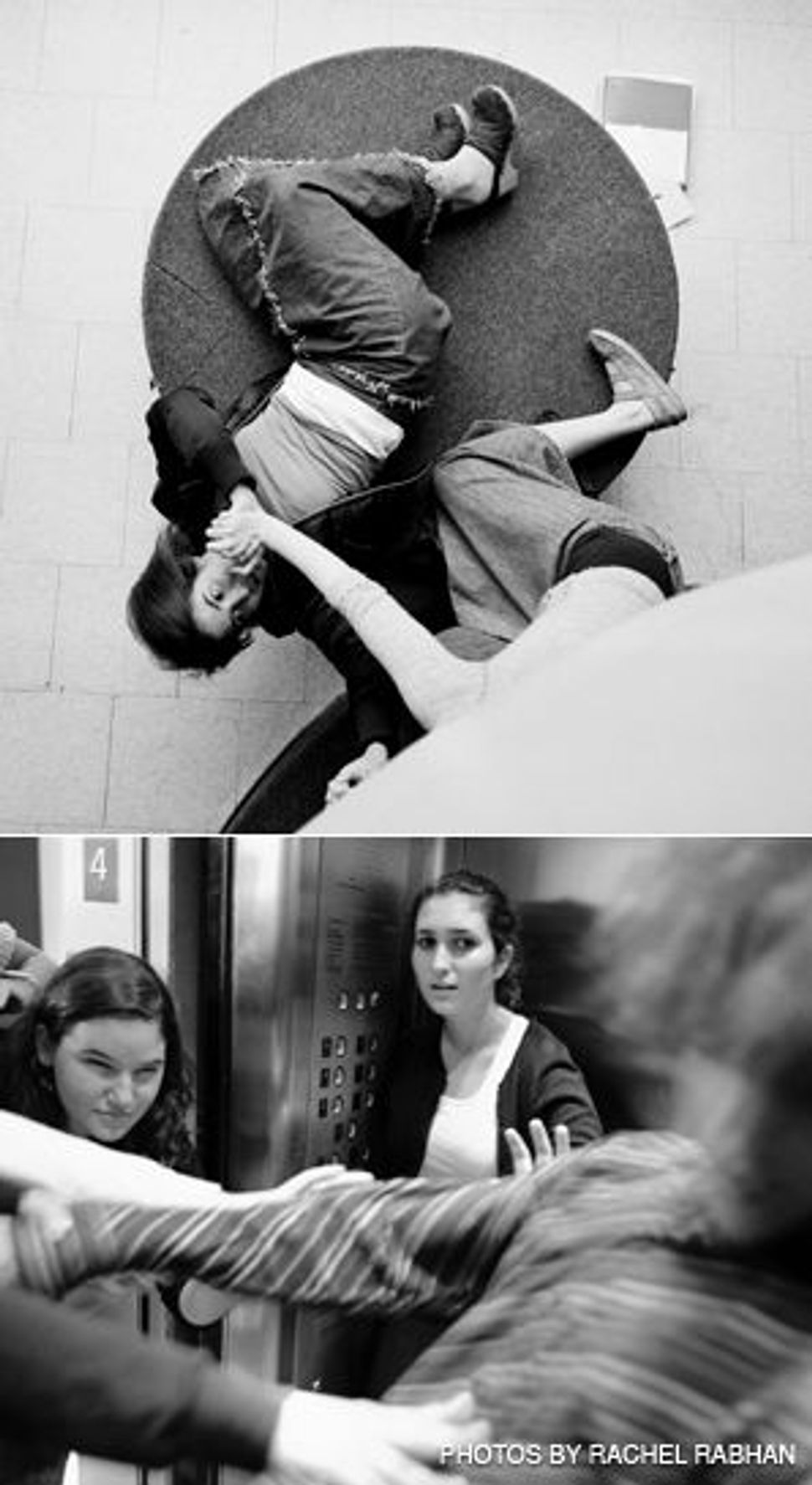 ACTING UP: Photographer Rachel Rabhan had students at New York Ramaz Upper School enact scenes from the Bible, including Jacob wrestling with an angel (above), and Joseph?s being thrown in a pit by his brothers (below).

A visitor to the Deutsche Gug-genheim Berlin’s new show of contemporary American art, Freeway Balconies, might be taken aback by the exhibition’s first piece: a luminous black-and-white photograph of a yarmulke-clad boy interacting familiarly with a girl who’s wearing a long skirt. The caption reads: “The Garden of Eden.” The photo is one of four by Rachel Rabhan in the exhibition of Jewish high-school students enacting scenes from the Bible. The photos, part of a larger a series called Divine Gesture, explore aspects of Jewish identity, storytelling and life at the Ramaz Upper School in Manhattan, where Rabhan teaches art. 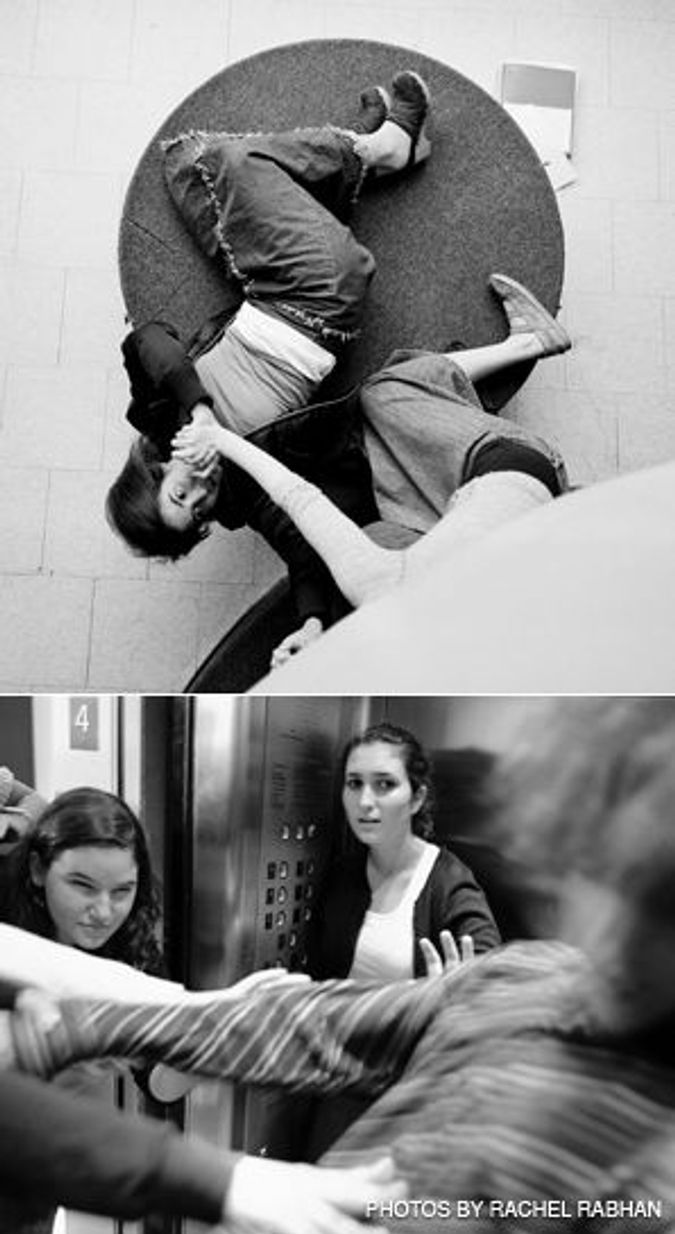 ACTING UP: Photographer Rachel Rabhan had students at New York Ramaz Upper School enact scenes from the Bible, including Jacob wrestling with an angel (above), and Joseph?s being thrown in a pit by his brothers (below).

The show, which opened in early July and runs until late September, takes its name from an Allen Ginsberg poem and features 19 emerging and established artists who explore issues of American identity and performance.

Rabhan, 35, grew up on the Upper West Side and is herself a Ramaz alumna. She began teaching art at Ramaz while she was still in college, and she continued to teach even while pursuing a Master of Fine Arts at New York’s School of Visual Arts.

It was around this time that she started working on what would become Divine Gesture.

“I wanted to do something about identity and my world, but I didn’t want it to be particular to me,” she explained. The Bible had exerted a strong influence on her since childhood, and Rabhan was also toying with an art project involving Ramaz.

The idea to combine her interest in Bible stories with her interest in Ramaz was endorsed enthusiastically by Collier Schorr, who was Rabhan’s teacher during her second year at SVA and is the curator of the current show at the Guggenheim in Berlin.

The high-school students were excited to be involved in the project, which Rabhan began in 2005. “They would ask, ‘How do we make these stories relevant to someone who doesn’t know the Bible, or who doesn’t know who we are? They were interested in the idea of the outside seeing into our world,” she said. Rabhan said that the students were also surprised by how their school came across in the photos: “They would tell me: ‘You make the school look so cool. You make the school look so fun.’ Because it’s not always like that. Ramaz can be very overwhelming.”

As an institution that prides itself on the percentage of students accepted to top-tier universities, Ramaz has a reputation for its rigorous double curriculum. This aspect of the school came out in the students’ choice of subject matter. “They always used the metaphor of high school as slavery,” she said, referring to a picture, not in the exhibit, that shows students carrying overflowing knapsacks and posing as slaves in Egypt.

Rabhan didn’t use any props or costumes. “The only thing we had as a tool was the gesture and the psychology behind the image,” she recalled. She also didn’t consult the text until after the images were made: “It was all based on how we were taught it, how we remember it and how we embody these stories.”

While Rabhan is delighted to be featured in such a prominent show, she is nevertheless ambivalent about the location. Specifically, she found it difficult to square the Berlin of today with the city’s history. “There’s a certain layer of confusion that I feel here,” she said. “I don’t feel the past here. I feel the scars of the past.” Additionally, she said she had yet to experience much in the way of a Jewish scene during her brief visit. “I was hoping that there would be a larger Jewish community to appreciate and enjoy the work,” she confessed.

But even without support from that community, Rabhan considers Berlin an important venue for her photos. “I think it’s pretty powerful to have these Orthodox Jewish kids in the Guggenheim museum in Berlin,” she said. “That’s pretty amazing in 2008 for our history. These kids are here, and they have a story to tell. And they are in a place that’s been through so much.”

A.J. Goldmann is a writer and critic living in Berlin.

Viewing School Through a Biblical Lens