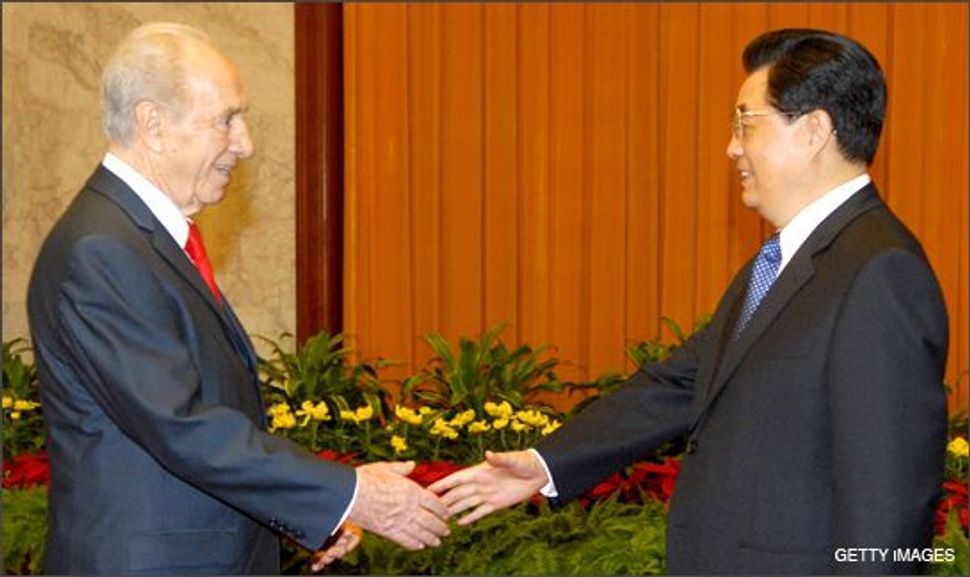 The sight of President Shimon Peres of Israel sitting in the stands in the National Stadium, known as the Bird’s Nest, last Friday night had Hebrew talking heads buzzing. The Jewish and Israeli press has made much of Peres being the first Israeli president to attend the Olympic games since Israel began attending the international competition in 1952, as well as the special arrangements made so that the 85-year-old head of state could stay at a hotel within walking distance of the stadium, to avoid violating Shabbat. He was also reported to have been only one of eight world leaders invited to meet with China’s President Hu Jintao.

Peres is no longer in Beijing, where he left behind Israel’s delegation of 43 athletes to sweat, swim and fend for themselves. While the president’s brief stint in China is no longer making headlines in Israel, he remains a media darling in China’s state-run media.

China Daily ran a puff piece on Thursday in the paper’s “opinion” page entitled “Peres Says it All with Poems,” which supposedly recounts an interview with the head of the Jewish state. It turns out that besides spending decades working Israel’s levers of power, the octogenarian is also a poet, and, luckily for us, the paper includes a poem he wrote “wishing for peace and harmony at the Beijing Olympics.”

Birds of all feathers/ come and sing together/ escape frozen orders/ and fly above the borders/ dismantle the old scheme/ take off with the great dream/ dream of harmony and glory/ for all alike, black and white/ poor and rich of equal right/ run and leap, hit and throw/ dance and swim and row/ you are all the best/ from east to west/ win, don’t kill and if you lose don’t hate/ hope exists both now and late/ bring home an olive branch/ your newly born have a chance/ to be free and strong, at their nest/ in Beijing we learn what is best

But it is the interview that follows that really raises eyebrows.

In it, Peres fawns over the Olympics and China, saying:

“The opening ceremony was brilliant and majestic, as in the magic world. It is the greatest event in our history.”

I guess he isn’t much of a Zionist if he thinks a 3-hour sound-and-light show outshines the founding of the Jewish state.

Regarding his nearby sleeping arrangements, he goes on to thank the Chinese authorities “for doing something really great. And for me, to witness the greatness is a great experience.”

Most worrying is his response to a question about which athletic events he would watch if he had the time. Now, anyone who knows Israeli geography would find his answer rather misinformed:

The last time I was in Israel or, uh, “the Jew’s Land,” the country bordered the Mediterranean Sea. Has Peres negotiated a secret land-for-peace deal that handed over the coast to the Palestinians while I’ve been following gymnastics?

“Jew’s Land” is obviously misspelled “Jerusalem” where Peres has been living since he was elected to be Israel’s president. “By greatest event in history” President Shimon Peres meant “greatest [opening ceremony in Olympic] history”