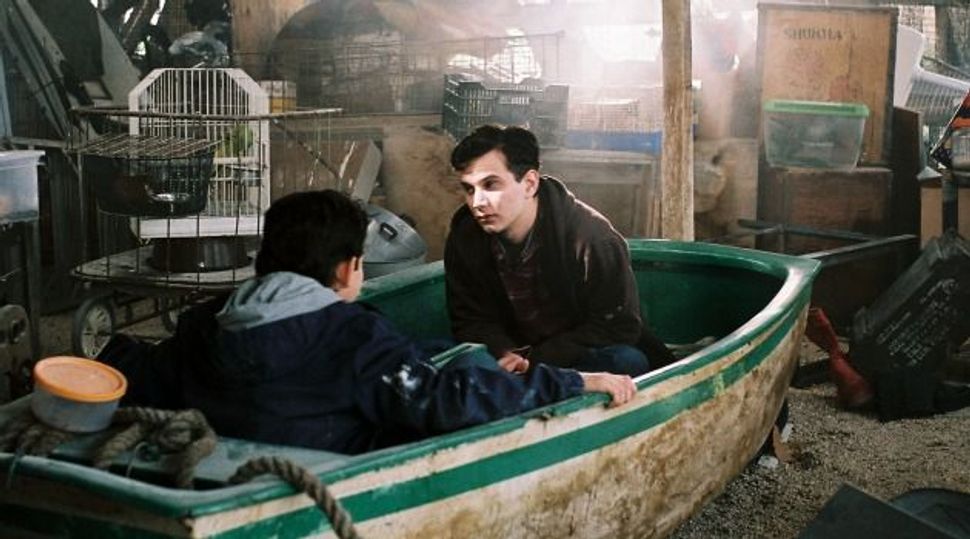 Rocking Times: Yoni bonds with his autistic brother in their toy boat. Image by Courtesy of SFJFF

San Francisco’s 31st annual Jewish Film Festival opened at the historic Castro Theatre on July 21 with the North American premiere of the Israeli film “Mabul” (“The Flood”). Winner of the best film and best cinematography categories at the Haifa International Film Festival in September 2010, and having earned six Ophir (Israeli Academy Award) nominations, this coming-of-age story centers on Yoni (Yoav Rotman), a boy about to have a bar mitzvah, and on Tomer (Michael Moshonov), his severely autistic older brother, who unexpectedly arrives home after years of living in an institution.

Directed by Guy Nattiv and co-written by Nattiv and Noa Berman-Herzberg, the film slowly reveals that the lives of the brothers’ parents are fractured under the strain of unemployment, addiction and infidelity. Their mother is a preschool teacher who creates a magical fantasy world for her students but is unable to carry that beauty into her own home. Their father demands honesty from Yoni and his wife but is deliberate in keeping his own life a secret.

The family is pushed to its limits by Tomer’s return. His disability renders him virtually helpless and his inappropriate behavior makes him a community pariah.

“Mabul” doesn’t romanticize autism. Unlike Dustin Hoffman’s portrayal in “Rain Man” of a man with autism who wins big money in casinos, or the protagonist in the popular novel “The Curious Incident of the Dog in the Night-Time,” who manages to independently navigate the London underground, Tomer isn’t an autistic savant. Yet neither one of Tomer’s parents commits to care for Tomer. As a result, Yoni becomes the unwilling caregiver.

Finding a thread of connection through Tomer’s echolalia, Yoni leverages Tomer’s only communication device to engage and entertain him. While Yoni studies his parsha about Noah and the flood, Tomer joins him, sitting in an abandoned boat. They rock and chant together. Unlike his parents, Yoni can find some joy in being with Tomer.

Though the plot seems to wander at times, with many distracting shots of birds and the beach (the theme of Noah and the flood, perhaps, doesn’t need to be so literal), in the end, “Mabul” gathers a crumbling family portrait and frames it using the ritual of the bar mitzvah.

The Jewish life-cycle ritual provides context for Yoni’s emerging sensitivity toward his brother, as becoming responsible for oneself and one’s community is the centerpiece of this event. And as Yoni matures with Tomer’s return, their parents take notice. The autistic son doesn’t transform this family, and we might guess he’ll be sent away again, but at Yoni’s bar mitzvah, Tomer’s presence ultimately leads the family to a triumphant celebration.

Elizabeth Stone is a freelance journalist living in San Francisco, Calif. She holds a doctorate in special education from the University of California, Berkeley.