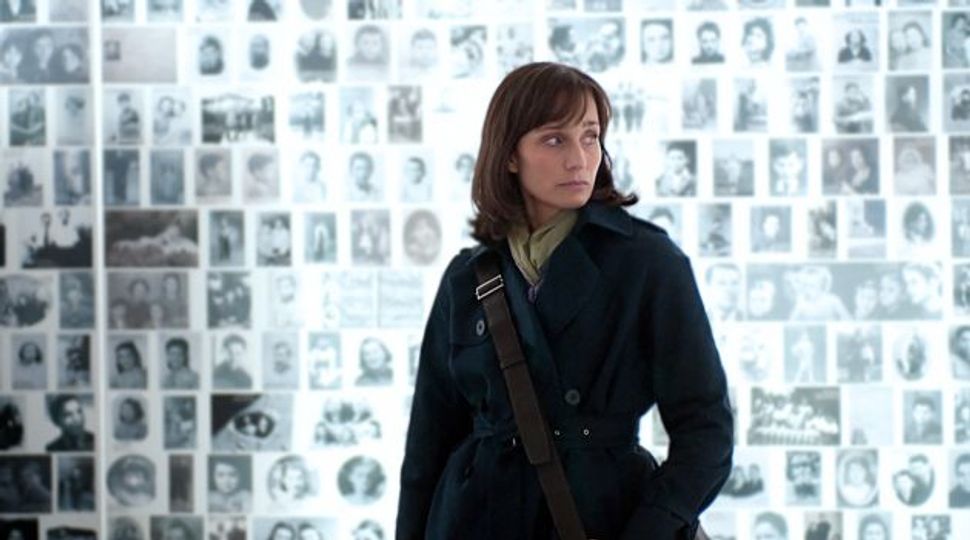 On a Quest: Kristin Scott Thomas plays a journalist trying to find out more about the 1942 Vel? D?Hiv Roundup. Image by Courtesy of Weinstein Company

It is peculiar, in a film based on the tendency of people to act wrongfully, for all the characters to do exactly what is right. But this is what happens in “Sarah’s Key,” directed by Gilles Paquet-Brenner and based on the novel of the same name by Tatiana de Rosnay. The film tells the story of a shameful moment in French history, the Vel’ d’Hiv Roundup of 1942, when French police arrested and interned thousands of Jewish families in the Paris velodrome before sending them to Auschwitz, while the rest of the populace watched.

Ten-year-old Sarah Starzynski, played by Mélusine Mayance, locks her little brother in a bedroom closet in a misguided moment of self-possessed bravery as gendarmes come for her family. She promises to return for him as soon as the family is released. Sixty years later, an American journalist, Julia Jarmond — played by Kristin Scott Thomas, who gamely undertakes a bilingual role — uncovers Sarah’s story while working on an article for the ironically named Accidental Tourist magazine. Julia and her husband, Bertrand Tezac, are simultaneously renovating an apartment that his family has owned since the war, which happens to be the very apartment from which Sarah and her family were taken. As Julia traces the connection, the film cuts between past and present, drawing one into the other and shrinking the distance between its two protagonists.

Thomas, as Julia, gives a remarkably understated performance — maybe too much so. She seems too in control; her emotions subsurface, her actions restrained, her career a breeze. (She is a journalist the way Tintin is — that is, nominally.) Still, the opacity Thomas gives her character succeeds in steering the story away from melodrama. As though to make up for this, the script becomes overly concerned with announcing itself: “If a story is never told,” Thomas somberly narrates, “it becomes something else — forgotten.”

Along its easy — and probably Oscar-baiting — route toward a teary conclusion, the film contains several beautiful scenes: a woman walking out of the velodrome tunnel as if enclosed in a cube of light; little girls, pale and skeletal, soaking on their backs in a silted river, and the rain making constellations on the side of a black car as Julia and her husband argue inside. In the film’s most eloquent moment, two children, having escaped a detention camp, stand in the woods, peeling off layer after layer of the clothing they have worn to protect themselves from the camp’s barbed wire, revealing with each layer a little yellow star. “Sarah’s Key” is drenched in the honeyed light of Hollywood. The period details of 1942 are colorful and attractive enough to dull the horror somewhat: Even as a woman is forced to urinate against a wall, we see only rolled-up stockings and fetching kitten heels, lighted by the afternoon sun. There is no doubt that the scenes in the camps and stadium are harsh, yet a PG-13 rating can’t help but ring false for a Holocaust film. Still more troubling than the film’s lack of real grit is its too easy morality: While premised on the universal capacity for evil, the film keeps that evil at a distance, allowing us to remain innocent even as we disparage the actions of faceless others. “How do you know what you would have done?” Julia demands of a co-worker. “I would have watched it on TV,” he replies — and this is exactly what the film allows us to do.

Historically, of course, the French (and, probably, all of humankind) were very much to blame. But the film misses the opportunity to make us feel this. Its France is a nation of Schindlers — the good policeman, the kind-hearted soldier, the gruff but loving farmer, the compassionate housewife, the generous benefactor — who all seem determined to do right by the country’s Jews. Julia’s own guilt-by-association quickly dissipates when she learns that her husband’s family “did exactly the right thing.” So, it would seem, did everyone.

Apart from a couple of grinning Nazis, the only possible exception is Sarah, turning her key in the closet lock. Yet, played as a miniature adult by the lovely Mayance, even she acts out of a naive courage that, tragic as it proves, is clearly blameless. Sarah is guilty only as an adult, and only by reason of her survival. Unfortunately, the latter portion of the film spends too little time on the thorny matter of survivor guilt, focusing instead on Thomas’s character.

The question of whether certain painful memories ought to stay buried, especially as those who remember the events of 1942 become fewer, is well worth asking. Remembering has a price, as this film takes care to note. But lurching so dramatically toward the common pitfalls of Holocaust fiction, “Sarah’s Key” dulls memory’s bite. Gilles-Brenner, himself descended from Holocaust victims, rightly celebrates humankind’s capacity for good, but in doing so diminishes its more troubling, too little examined capacity for ill — surely the part we need to remember most.