Will of Iron, Heart of Stone: Book Shines Light on Golda Meir’s Harder Side 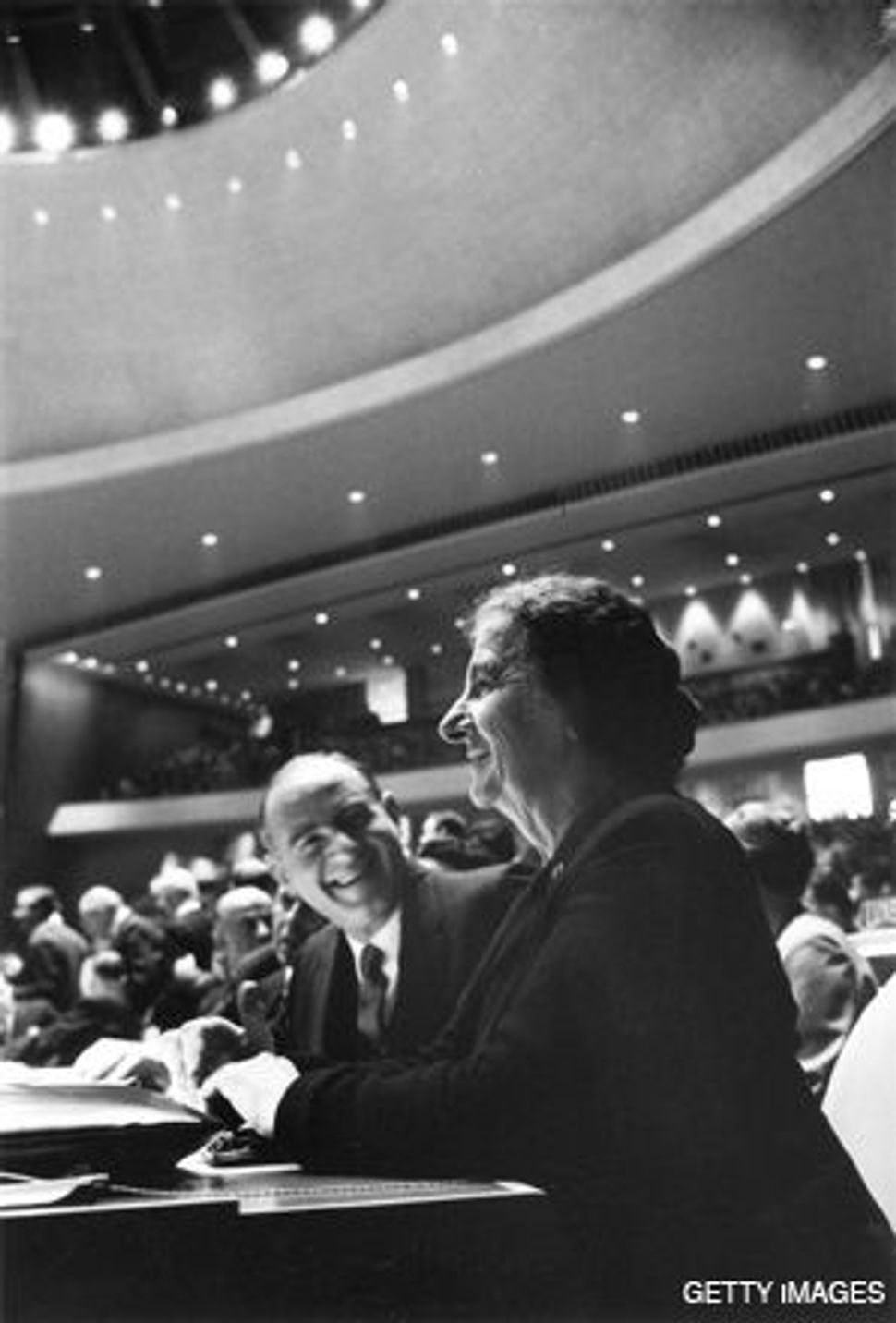 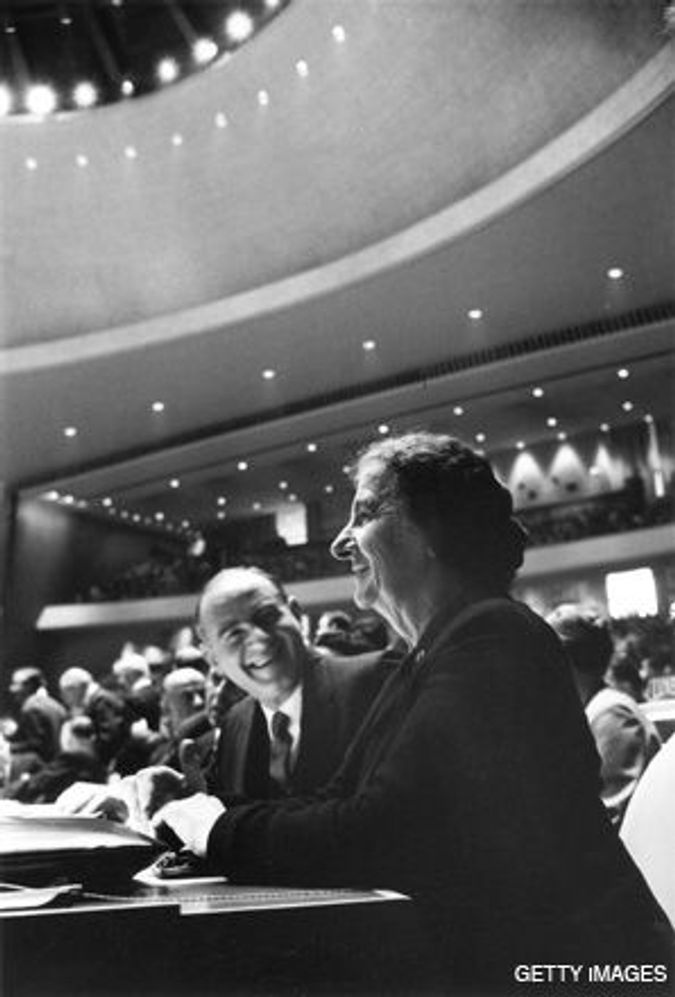 My moment of eye-openng disillusion with Golda Meir came early on in Elinor Burkett’s new biography of the female premier, titled simply “Golda.” The year was 1950, and Golda Meyerson, as she was then known, was nearing 60 and had just returned from her stint as Israel’s first ambassador to the Soviet Union. Her son, Menachem, off studying the cello in Yugoslavia, was having marital problems with his new wife. She was pregnant and insisted the couple return to Jeru-salem to have the baby. Meir assumed her daughter-in-law was trying to sabotage her son’s promising music career, so she decided that, as punishment, she would ignore her first grandchild. The baby girl that was born that year, Meira Meyerson, had a mild case of Down syndrome. Meir refused to see her. The child, she demanded, should be institutionalized. “Golda was like a stone,” an old friend confessed to Burkett.

That Israel’s fourth prime minister was a stone is not news. Any of the half-dozen biographies already published, or even her own ghostwritten 1976 memoir, “My Life,” attest to what could generously be described as an iron will. And for a woman who shoved her way into the innermost circle of Labor Zionist leadership, a notoriously egomaniacal group of fiery political men, one can almost forgive her some spitefulness and coldness along the way. Certainly, one wouldn’t want to judge Meir any more or less harshly than her male cohorts. What Burkett tries (and succeeds in) doing is taking a sympathetic but unapologetic look in order to discover what happened when her life intersected with power. It’s not pretty. Anyone expecting the “part Superwoman, a dash of Emma Goldman, a smidgen of Nelson Mandela, all wrapped up in the warmth of our grandmothers,” as Burkett describes the popular image of Meir, won’t find her here. In her place is a tragic, lonely, sickly figure, a terrible mother who cuckolded and neglected her husband, alienated her loved ones and often terrorized her closest friends.

Meir, like most of Israel’s founders, never sought power for power’s sake. She was a true believer. And if her personal life was ground beneath her ambition, it was only because she wanted desperately to shape the Jewish state. From her earliest contact with Labor Zionism, as a young Russian immigrant to America living in Milwaukee, the ideology gripped her like an addiction. Her move to Palestine in 1921, dragging behind her a reluctant husband, Morris Meyerson, and her persistence through the trials and tribulations of backbreaking and humiliating kibbutz life was first testament to her intense desire to live out the Zionist dream. Soon she was making her way into the labor movement and its all-powerful flagship union, the Histradrut, propelling herself to power on charisma and fundraising skills. She became Zionism’s best saleswoman — especially to American Jews. By laying on a powerful guilt trip and providing inspiration on cue, Meir could milk an audience better than anyone. She knew “where their fears and dreams lay buried, what made their emotions vanquish their intellects,” Burkett writes. By 1948, with the new state desperately in need of money to buy arms, Meir, now in the inner circles of power, almost single-handedly saved Israel, raising tens of millions of dollars.

Her outside charm — always ready with a witty comeback — was matched with a dictatorial style on the inside. She didn’t exactly bring nuanced decision-making to the government offices she ran through the 1950s and ’60s. Her time as head of the Labor and Foreign ministries were marked instead by the pursuit of single-minded goals, often without a thought to reality or an ear for opposing viewpoints. Which is not to say that her inflexibility didn’t lead to great successes. She gave Israel one of the most progressive Social Security programs in the Western world. When, as foreign minister, she found herself overlooked by David Ben-Gurion on important dealings with Europe (namely, building the atomic reactor at Dimona), she opened a whole new channel of diplomacy, to Africa, which through the ’60s was a symbolic coup for the cornered state. As Uri Avnery, the longtime Israeli leftist, described her, Meir had a “complete intolerance, complete disdain for any other opinion, a kind of primitiveness which was her strength.”

Even as she aged, battling never-ending maladies — while still smoking multiple packs of Chesterfields every day, drinking endless cups of coffee and hardly sleeping — Meir still wielded her authority relentlessly. By the time she became prime minister, she represented the power center of an older generation of politicos who refused to be pushed off the stage by a rising group led by Moshe Dayan and Yigal Allon, themselves too divided to challenge her. Almost by default did she become the country’s leader, the last woman standing.

The tragedy of her life story was that she took charge of Israel just at the moment when the first threads in the slow unraveling of the Zionist dream could be seen. She had arrived not because she was a thinker on foreign policy or on economics, but because she was a workhorse and a bulldozer. But Israel, at that critical, turbulent turning point following the Six Day War, needed imagination. She could not get her mind around the new economic realities or the anger seething in the Sephardic community, or the long term manifestation of what it meant that the lines between Israel and its occupied territories were quickly being erased. The surprise attack of October 1973 was another case of this blindness. Instead of cutting through the hubris of Dayan and his cohorts and mobilizing the army when an attack seemed imminent, she let herself be lulled by those sons of her Zionist revolution, men she instinctively trusted.

The country turned on Meir after the Yom Kippur War. As Burkett intelligently points out, she came to represent an Israel that had advanced with blinders on. A remorseful people couldn’t get rid of her fast enough. But in this rejection, Burkett also sees another layer to the Golda story, an intriguing one. The hardness, the dogmatism, the fact that a woman with more will than intelligence could succeed the way she did, also begs the question: Was she as much a product of the Zionist enterprise as a contributor to it? Did that great ideological project require people who could be cruel and uncompromising the way she could be? Golda and her blacklists, Golda and her relentlessness, Golda and her deep, confident laugh at the world — this was also Israel in those early years.

Meir was no feminist and resented being turned into an icon of her gender’s achievement. She would probably see no significance in the fact that Israel might soon be electing its second female prime minister in Tzipi Livni. But Meir’s name inevitably comes up every time the idea of Livni as leader is mentioned. There are certainly deep ways in which these women are connected. Meir’s public appeal, both to Israelis and to the world, was her authenticity, which is another way of saying that Israelis saw themselves in her. The same word, “authenticity,” is thrown at Livni. Meir preferred clarity to artful diplomatic ambiguity; Livni does as well. Meir was described as a nudnik. So, too, Livni. But the similarities end there. Meir, as Burkett’s book allows us to see so well, was very much the product of her generation. She never deviated from the path set out at the turn of the century with the arrival of second and third waves of pioneers. Even as prime minister, 70 years later, she still clung to a fundamentally unaltered worldview. Livni grew up in a right-wing Zionist milieu — her parents were both in the militant Irgun — and fully embraced the visions of greater Israel. But she eventually came to question that brand of Zionism, one that rejected compromise and avoided any alteration of the Zionist dream. Like the current Israeli consensus, she has now long understood that the grand ideological plan needs to be scaled back in order to ensure its own sustainability. She’s a different type of female leader for a new generation of Israelis, one that wants to hear hard truths and not simply be reminded that the world is against them. This biography is then not just the story of Meir, it’s an elegy for a long-dead generation of founders, the staunch first Israelis who knew how to actualize their dreams but less so how to confront reality.

Gal Beckerman, a regular contributor to the Forward, is a writer living in Berlin. His history of the Soviet Jewry movement will be published in the fall of 2009 by Houghton Mifflin Harcourt.

Will of Iron, Heart of Stone: Book Shines Light on Golda Meir’s Harder Side