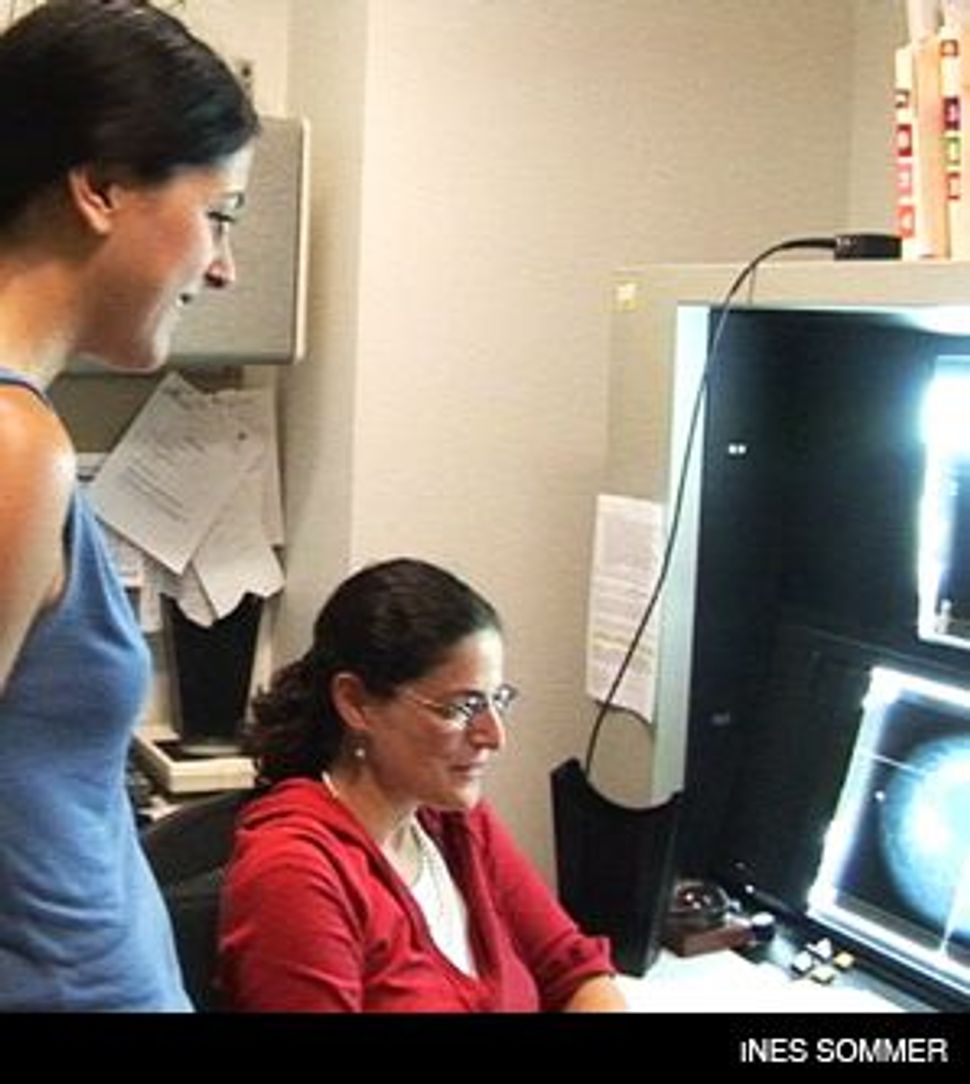 ?IN THE FAMILY?: Documentarian Joanna Rudnick (left) gets a lesson in how to read a mammogram from her sister Lisa.

Joanna Rudnick’s poignant new documentary, “In the Family,” opens to soft, sad music and an unlikely story. Joanna, a dark-haired young woman with expressive eyes, is laughing somewhat nervously as she confides in her boyfriend, Jimmy. 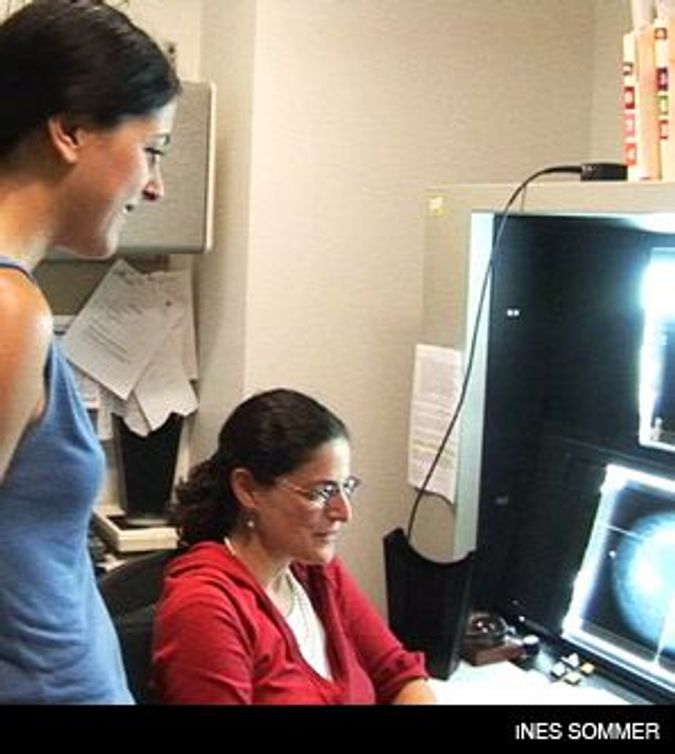 ?IN THE FAMILY?: Documentarian Joanna Rudnick (left) gets a lesson in how to read a mammogram from her sister Lisa.

“I wasn’t exactly going to tell you I had a genetic mutation and I’m making a film about it on my first date,” she tells him. But in a world transformed by the accessibility of information, Jimmy had discovered this anyway with a Google search.

The film focuses on the effects of the breast cancer mutation on women and their families, and asks a heartfelt question: “Would you want to know if your body contains a ticking time bomb?”

Getting a positive test result for the BRCA1 or BRCA2 (short for breast cancer 1 or breast cancer 2) mutations can lead to a host of life-changing decisions. Some of them are traumatic, including whether to have surgery to remove the breasts or ovaries to reduce the chance of developing breast or ovarian cancer.

If a woman is positive for the BRCA mutation and does not have the surgery, then, as Dr. Lee Shulman states in the film, she faces an 85% to 95% lifetime risk of developing breast cancer and a 50% to 60% risk of ovarian cancer.

When Rudnick, 31, set out to make the film, she “could not find a young woman who was unmarried and hadn’t had surgery.”

In people of Ashkenazic Jewish descent, researchers have found that about 2.3% (23 out of 1,000 people) have an altered BRCA1 or BRCA2 gene. This frequency is about five times higher than that of the general population, according to the National Cancer Institute.

Rudnick’s compassionate documentary focuses on her own life, her struggle upon learning she has an altered gene and her developing relationship with Jimmy. (They have since broken up.) While her role in the film represents Ashkenazic Jewish women, she also wanted to include others who have the genetic mutation. “I wanted to broaden [the film] out to show that every community is dealing with this and dealing with it in their own way… in this sort of beautiful, tragic way, it connects us all together,” she said.

The film also explores the lives of women she met through Force: Facing Our Risk of Cancer Empowered, an organization that helps those with the BRCA mutation.

The women in the film span the divide of age, race and religion, and it’s sometimes hard to listen to their candid answers to Rudnick’s questions.

The 86-minute documentary includes deliberately unpolished footage, giving the film a home-movie quality and more standard interviews with experts. It also uses cartoon guides to explain what otherwise could be complicated scientific explanations.

The film captures a poignant moment when three members of a Christian family, the Hankes, go together to receive the results of their genetic tests. Two of three sisters, Stacy and Corrin, have the mutation; the third, Rachael, does not. Everyone is crying. It’s at that moment that one of the sisters laughs through her tears and suggests that Rachael is crying because she “doesn’t have an excuse to get her ovaries removed.”

Rudnick said that it was the story of a woman named Linda Pedraza that affected her most during the filming of the documentary. “I think that seeing up close the cancers that BRCA can produce and watching a woman succumb… to those cancers… was a real wakeup call for me,” she said. Rudnick explained that she was impressed by Pedraza’s strength and that she found it “humbling” to be so welcomed into her life and home.

Martha Haley, an African-American woman, reads a poem as the camera focuses on a picture of her — post-mastectomy.

I can still see myself as a woman,
I’m a woman by God’s creation only,
One thing you can’t take from me,
And that is the ability to be a survivor.

The film also captures lighter moments, filming women who are posing for a breast cancer calendar. These women, who have donned Mardi Gras masks and are skimpily attired, show off their reconstructed breasts and their post-op scars, and otherwise demonstrate that they are not ashamed of their bodies.

“The whole time I made the film, I never heard someone say, ‘Why me?’” Rudnick said in a telephone interview from Chicago. “The women I’ve met in this community are… incredibly strong. I did not see the blame or feeling sorry for oneself.” Rudnick’s own dilemma about having the BRCA mutation is more complicated than most. She was only 27 when she got a positive result on the gene mutation.

“I think there’s a particular set of complications to being young and wanting to have children,” she said. For now, Rudnick has opted for an approach that includes surveillance and screening, and believes that she will have the surgery sometime in the future, possibly when she is 40.

Rudnick’s honest approach and her respect for those with whom she comes into contact help make this film an eloquently moving tribute to those facing the questions of whether to find out their risk and what to do afterward.

She would like the film’s viewers to take away the message that “it’s not shameful to come from a family that has diseases.… We just need to be supportive [and] talk openly about things like disease.”

At screenings, she realized she had achieved her goal of reaching a wider audience, particularly men. “I have men come up to me and say, ‘You got me to cry,’” she said. As someone who does not believe that breast cancer is exlusively a women’s issue, Rudnick is happy about this development.

Partnering with the Chicago Center for Jewish Genetic Disorders, “In the Family” will be screened by Hillel and Hadassah, in addition to screenings at the San Francisco Jewish Women’s Film Festival. It will air on October 1, the first day of Breast Cancer Awareness Month, on P.O.V., a PBS showcase for independent nonfiction films.