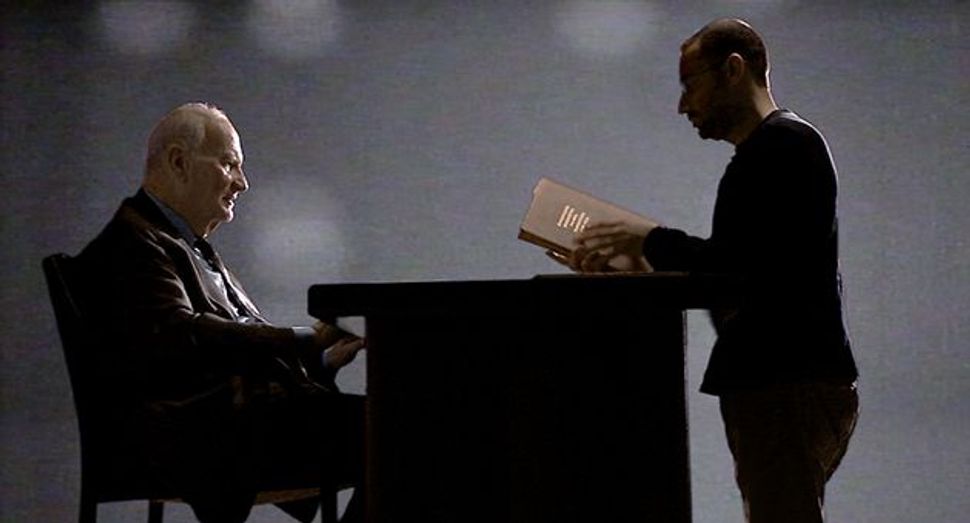 Before the Law: Ra?anan Alexandrowicz?s film shows the human agendas behind both lawmaking and filmmaking. Image by COURTESY OF PRAXIS FILMS

The audience was remarkably quiet during a screening of “The Law in These Parts” at the Jerusalem Film Festival. My fellow Israelis, who usually have no qualms about exchanging opinions during a movie, or even about answering an occasional cell phone call, sat absolutely still. Even after the movie ended, there was a moment of shocked silence before the audience burst into applause and called onstage the director, Ra’anan Alexandrowicz, and the producer, Liran Atzmor. It was very clear which film would win the prize for best documentary.

“The Law” explores the legal side of military rule in the occupied territories. A complex system of orders and laws has developed since 1967 that allowed for the creation of settlements, justified land confiscation and provided a basis for arrest and imprisonment of thousands of Palestinians, many of them without a court hearing or anything resembling the due process that any citizen would expect. The audience that gathered for the festival in the beautiful Cinematheque building overlooking the Old City was shocked into silence, because this complex system that has defined everyday life of Palestinians over the past 40 years is all but invisible to most Israelis.

What Alexandrowicz shows masterfully in his carefully constructed film is that the law is not objective. It is a kind of narrative, and like any narrative, it relies on interpretation. Throughout, the director draws a parallel between the process of legal judgment and that of documentary filmmaking. Both are undertaken by people with their own views, goals and agendas.

In its thoughtful self-consciousness, the film is a part of an Israeli documentary tradition that is highly aware of its medium. Like Asher Tlalim’s “Don’t Touch My Holocaust” (1994), Yulie Gerstel’s “My Land Zion” (2005) or Yael Hersonsky’s more recent “A Film Unfinished” (2010), neither the identity nor the responsibility of the filmmaker is obscured either on or off screen.

From the opening moment, where the director’s voiceover explains, “This is my documentary film,” the human agency of the construction of narrative is evident. On screen, the assistants are putting together the sets — a chair and a table — under the lamps, cables and microphones, with a large screen onto which the archival footage will be projected in the background. On this set, Alexandrowicz interviews a number of former military judges and members of the Israeli High Court of Justice. Throughout these interviews, the director keeps reminding us that this is his film and hence his interpretation of judges’ decisions, which themselves are interpretations of law.

These interviews also show how the laws themselves develop in response to personal agendas, political goals and perceived military needs, rather than to any abstract idea of justice. One of the elderly judges acknowledges that in 1967, Israel decided that because there was a political need to “keep order,” the Israel Defense Forces should establish a legal system to rule the territories rather than to extend an existing Israeli legal system to include the occupied land. An entirely new legal system came into being, designed, as the judge explains, “to keep order, not only justice.”

Amazingly, Alexandrowicz succeeds in presenting his indictment of the Israeli legal system without demonizing the judges. His camera is sympathetic to the old men, and he shows their human vulnerability and their moments of hesitation. They are the products of their time, and they did the best they could, under the circumstances. And yet, the story that emerges from the judges’ answers to Alexandrowicz’s unhurried and calm questioning is deeply disturbing to any audience and perhaps especially to Israeli ears. One of the more shocking stories reveals the roots of legal decisions creating a basis for the settlement movement.

Initially, when the territories fell under the rule of the IDF, Israel conformed to international law according to which confiscation of occupied lands in private or public ownership is allowed only for security reasons. Thus, when the first settlement, Elon Moreh, was built on Palestinian land by a group of guerrilla volunteers, the local owners sued and won. The news reached Ariel Sharon, who immediately grasped the implications. He gathered an emergency meeting of legal advisers, and a young lawyer, Alexander Rabati, found a legal loophole.

Under an old and forgotten Ottoman law, so-called mawat land, land between villages that is unused for agriculture or other purposes, may be claimed by the current state. The next morning, Sharon surveyed the occupied territories by helicopter and mapped the patches of land in between villages. This land, claimed by the State of Israel, would turn rapidly into settlements in the West Bank and Gaza. The consequences of resuscitating mawat land law are hard to overestimate: Today, about half a million Israeli citizens live in such settlements.

Equally upsetting is the acknowledgment of the judges that they knew that Shabak, the Israel Security Agency, used torture and yet, before the high court ruling against it, they did not object to these methods of investigation. As in other cases, the order was more important than the justice. Even the Israeli High Court of Justice was not free from these deep biases: The film quotes research according to which the vast majority of the high court rulings favored the interests of the state.

“The Law in These Parts” was one of the artful portrayals of the situation in the occupied territories and Gaza at the festival, along with “Luxuries” by David Ofek, “Concrete” by Nurit Kedar, and “Tears of Gaza” by Vibeke Løkkeberg. Still, there are those who have stopped their ears to the hard messages of the films. But for those whose eyes and ears are open, perhaps “The Law in These Parts” could jumpstart a national conversation about the rule of law in the territory under Israel’s jurisdiction.

Olga Gershenson is associate professor of Judaic and Near Eastern studies at the University of Massachusetts Amherst. She is writing a book about the Holocaust in Soviet films.