From Mussolini’s Estate to Shoah Memorial 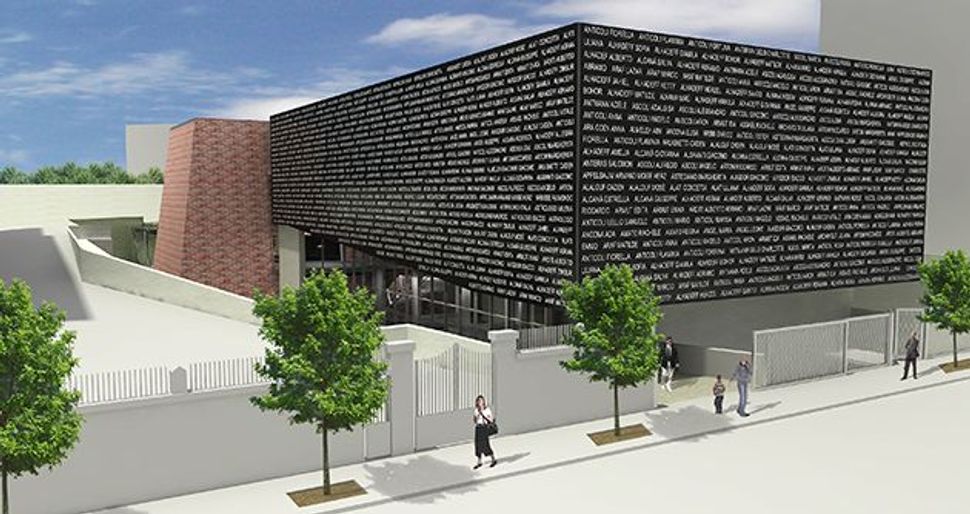 In August, the city of Rome is expected to give its final approval to plans for Italy’s new Holocaust museum, the Museo Nazionale della Shoah. Designed by Rome-based architect Luca Zevi, son of famed architecture critic Bruno Zevi, together with co-designer Giorgio Tamburini, the museum will be built on the historically resonant site of the Villa Torlonia, a neoclassical estate that once served as the home of Italian dictator Benito Mussolini. Renderings of the museum were released to the public in the spring. Zevi discussed the museum plans and Jewish architecture by e-mail with the Forward.

Gavriel D. Rosefeld: In the United States and in parts of Europe, Holocaust museums have existed for decades. Why has Italy taken so long to create its own national Holocaust museum?

Luca Zevi: The belatedness of the Museo Nazionale della Shoah is emblematic of Italy’s difficult confrontation with its fascist past. There is a tendency in Italy to blame Nazi Germany for what happened to Italian Jews, a perspective that quietly passes over the fact that in 1938, long before the Nazi occupation, there were “racial laws” promulgated by the Italian state. Moreover, while many Italians rescued Jews in the Holocaust, a considerable number collaborated with the Nazis and betrayed Jews who had gone into hiding. Some Italians are willing to admit this, but most see themselves as “brave Italian people,” as victims of history. These difficulties in facing the past help explain the delay in establishing the museum.

What significance will the institution have in Italian cultural and political life? Is it meant to be primarily a Jewish institution, or one with a broader focus?

When it was originally conceived by the Italian minister of culture in the first Prodi government, Walter Veltroni, the museum was envisioned as a “Museum of Intolerances and Exterminations” dedicated to examining the universal problem of intolerance in a comparative fashion. In this version of the museum, the Holocaust would have been featured as the worst example of a phenomenon to which all human beings are prone. After the Prodi government fell and Veltroni became mayor of Rome, however, this original plan was abandoned and the decision was made to have the museum focus primarily on the history of the Holocaust in Italy. The result is that the museum will have a more particularistic function as an institution devoted to wrestling with a painful chapter in Italy’s past.

Holocaust museums around the world have been built in different architectural styles — modernist, postmodern and deconstructivist. How did you approach your design for the Museo Nazionale della Shoah?

In contrast to many American museums, which use highly explicit concentration camp iconography, or Moshe Safdie’s new museum at Yad Vashem in Jerusalem, which culminates with a redemptive symbol of Jewish rebirth in Israel, here in Rome we have produced a “black box.” Inscribed with the names of deported Italians, the black box embodies what the Holocaust represents for Europe — the most heinous mass murder history has ever known. This “absolute tragedy” prevents us from searching for any “fashionable” architectural form of consolation. From the modern movement I have learned the need to express architecturally the functions and signifiers that belong to the inner character of a building without any particular obedience to the compositional rules and proper stylistic languages of the past.

Your father was well known for seeing deep connections between architectural styles and political ideas. As a longtime anti-fascist opponent of Mussolini in the 1930s and ’40s, he later condemned classicism as complicit with authoritarianism, and heralded Frank Lloyd Wright’s “organic” modernist architecture as a superior democratic alternative. To what extent have these ideas played a role in your work?

My father was firmly convinced that architecture should express liberty. He viewed the reappropriation of classical forms as part of a tendency to revive ancient models of authoritarian society. By contrast, he hailed Frank Lloyd Wright’s architecture for its celebration of individual autonomy and democratic emancipation. It is precisely this lay-oriented and libertarian approach that has been formative to me as an architect.

I believe in the concept of Jewish architecture no more or less than one would believe today, in an age of globalization, in Indian, Chinese, Japanese, Latin-American or African architecture. The reason for this is that Jews, over the course of the past two millennia, have lived dispersed throughout many small communities and have been unable to develop certain dominant architectural styles that they could follow. Jews never ended up producing “Jewish architecture”; they responded, time and again, in experimental and creative ways, to the challenges that present themselves in mostly unfavorable situations, without ever having the opportunity, or the desire, to develop a unified architectural idiom. This experimental and creative approach is the legacy that Jewish tradition has assigned to contemporary architects, an approach that my father defined as “anticlassical.”

Finally, Jews have traditionally, if unfairly, been seen as underachievers in the field of architecture. Since 1945, however, and especially in the past several decades, Jewish architects have risen to unprecedented prominence. Your father was noted for having hailed the work of Peter Eisenman, Daniel Libeskind and Frank Gehry. Other names could easily be added to the list. How would you assess the achievements of Jewish architects over the course of modern history?

These architects have exhibited a high degree of expressive freedom, which my father admired. What surfaces in their works are some of the anti-conformist tropes Jews have developed over the centuries.

At the same time, it is important to remember that Jewish tradition is attentive to the sanctification of the everyday, to the construction of norms that can be shared and that inspire people to unite in communities characterized by respect for diversity and — to some degree, at least — social justice.

Today, one frequently encounters — especially in developing countries — works of architecture so overbearing that they resemble authoritarian “cathedrals in the desert.” Jewish tradition might be able to provide an alternative to this trend by moving beyond individualistic forms of architectural expression and promoting a new communitarian spirit, which today is so sorely lacking.

Gavriel D. Rosenfeld’s latest book, “Building After Auschwitz: Jewish Architecture and the Memory of the Holocaust,” will be published in October by Yale University Press.

Asher Biemann, who translated the interview from the Italian, is associate professor of religious studies and director of the Jewish studies program at the University of Virginia.

From Mussolini’s Estate to Shoah Memorial