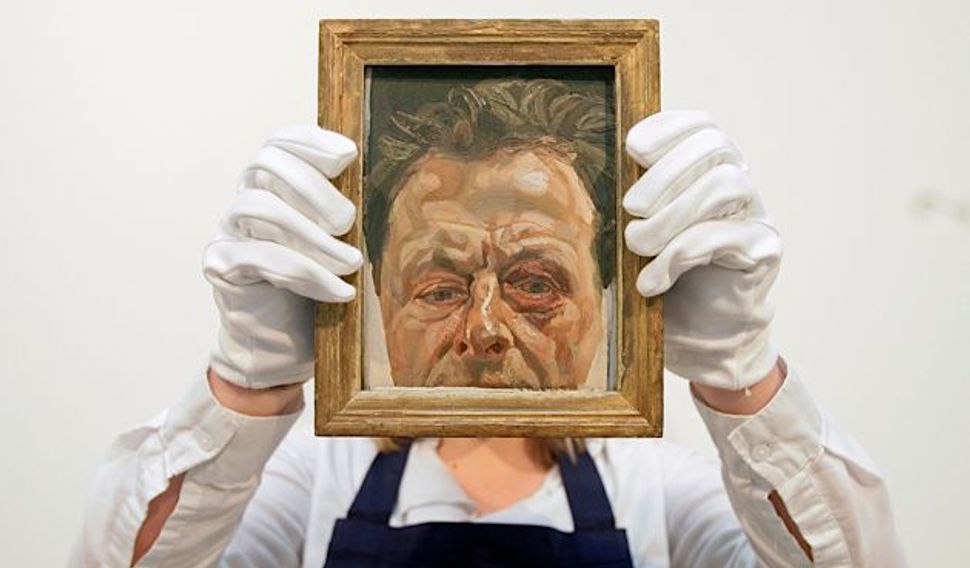 British artist Lucian Freud died July 20 at 88, after a long and successful but also contentious career. Born in Berlin, where his father, Ernst, was an architect, Freud came to Britain with his parents in 1933 to escape Nazi Germany. Five years later, as the Nazi noose tightened, his grandfather, Sigmund Freud, left Vienna and joined his family in London. A British citizen by 1939, Lucian first exhibited his work in 1944 and continued to show steadily for the next 68 years.

Abstract painting dominated the British avant-garde in the 1940s and ’50s. Freud, however, pursued his own path. His early surrealist configurations of outsized animals and plants in domestic interiors gave way to a career-long realist focus on portraits and nudes. But Freud was not alone or out of the mainstream in this figurative pursuit. Among his artist friends were Francis Bacon, Frank Auerbach, Leo Kossoff and R.B. Kitaj — a group later designated by Kitaj as the School of London. Many of them were Jews, and for all of them the figure was an expressive concern.

Notwithstanding his Jewish colleagues and his youth spent as a Jewish refugee, it is hard to see Lucian Freud the artist as particularly Jewish. To claim this for his art would be a reductive search for a Jewish essence or, more likely, a Jewish stereotype. Unlike Kitaj, Freud did not explore Jewish issues or history; his figures show little ethnic identity, and his paintings scarcely depict any social or personal space beyond the studio. If anything, his pictures seem like a softer echo of interwar Germany’s Neue Sachlichkeit (New Objectivity), in which edgy pictures of men and women embody social and existential malaise. Mainly, the Jewishness of Freud’s career exemplifies modern diasporic success: acculturation, secularism, national recognition and international acclaim.

Freud’s subject was clearly the person before him: friends, family, lovers, people he knew. “The subject matter is autobiographical,” he declared in 2009. “It’s all to do with hope and memory and sensuality and involvement, really.” What isn’t included here? The comment points to the depth of his attention in creative exchange. They may be confined to the studio, but Freud’s figures are not simply models or props. No matter how much a painting becomes a “Lucian Freud,” it is also — emphatically — a pictured individual and character.

Portraits and nudes — faces and bodies — were Freud’s chief concerns, and they thoroughly disobey any cultural ideal. The naked men and women are massive creatures whose heavy flesh oozes and rolls as they stand, sprawl or loll around. Freud’s thick slabs of paint create tactile surfaces; almost sculptural, they render the figures as solid matter and substance. Recurring images of performance artist Leigh Bowery, for example, constitute a pictorial conversation with this hyper-masculine colossus, who seems both abject and threatening, gentle and fierce. These pictures perform an irresistible contradiction: shock and fascination, revulsion and plenitude.

Freud’s portraits, always close-up, convey a similar intensity. A portrait of Queen Elizabeth II painted in 2000–01 is only 6-by-9 inches, but, typically for Freud, it took a year and a half to complete. To maintain the queen as the icon of stamps, money and parliamentary events, Freud kept the pearls and the stiff coiffure, and specifically requested the Imperial State Crown. But the familiar icon ends there. The queen’s head fills the frame, and the viewer comes uncommonly close to thickly painted cheeks and jowls, an inscrutable expression and an unseeing, inward gaze. Remarkable in its candor, the portrait proffers a very un-royal intimacy.

There is surely chutzpah in Freud’s vision — and chutzpah, after all, is an artistic necessity. But far from a nervy story or punch line, Freud’s boldness is a visual effort to see, to grasp and to know. The artist’s gaze may be audacious, but like Sigmund Freud’s psychoanalytic project, it is neither demeaning nor cruel. In contrast to his friend Bacon’s Christian visions of tormented figures and screaming popes, Freud’s is a searching and empathic gaze. His pictures model form without ferocity, in line with Jewish philosopher Emmanuel Levinas’s idea of the “face-to-face” encounter with an Other’s being. This pictorial adventure may be the heart of Lucian Freud’s Jewishness. Who else would make a powerful but very tiny picture of his queen?