‘Catch-22’ Still Saner Than Ever 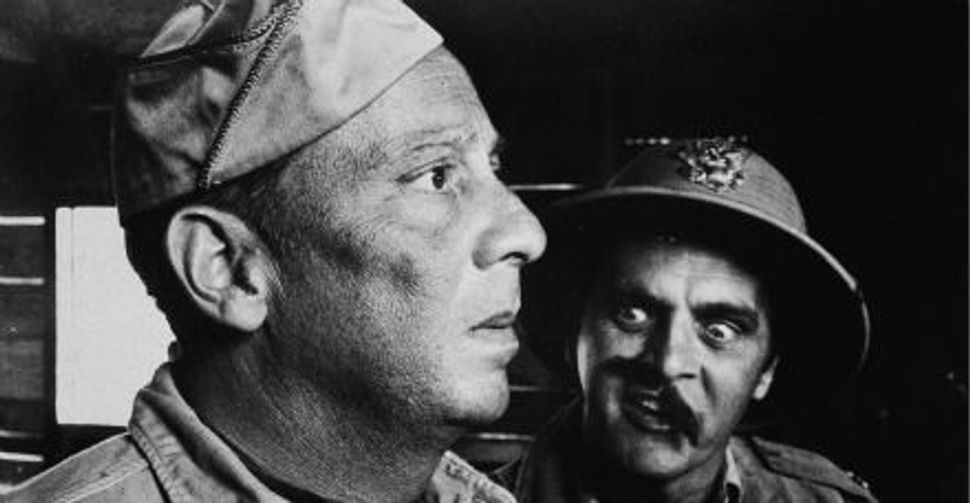 Joseph Heller is invariably omitted from lists of American Jewish writers, but he should be included, and high up. “Catch-22” — which has just celebrated its 50th birthday — is notable among American novels in the second half of the 20th century for having been read with almost no acknowledgment of its Jewish identity. Heller himself is responsible for disguising the association, but there can be no doubt about the novel’s Jewish roots and branches, and Heller’s own earlier notes on the book confirm this. 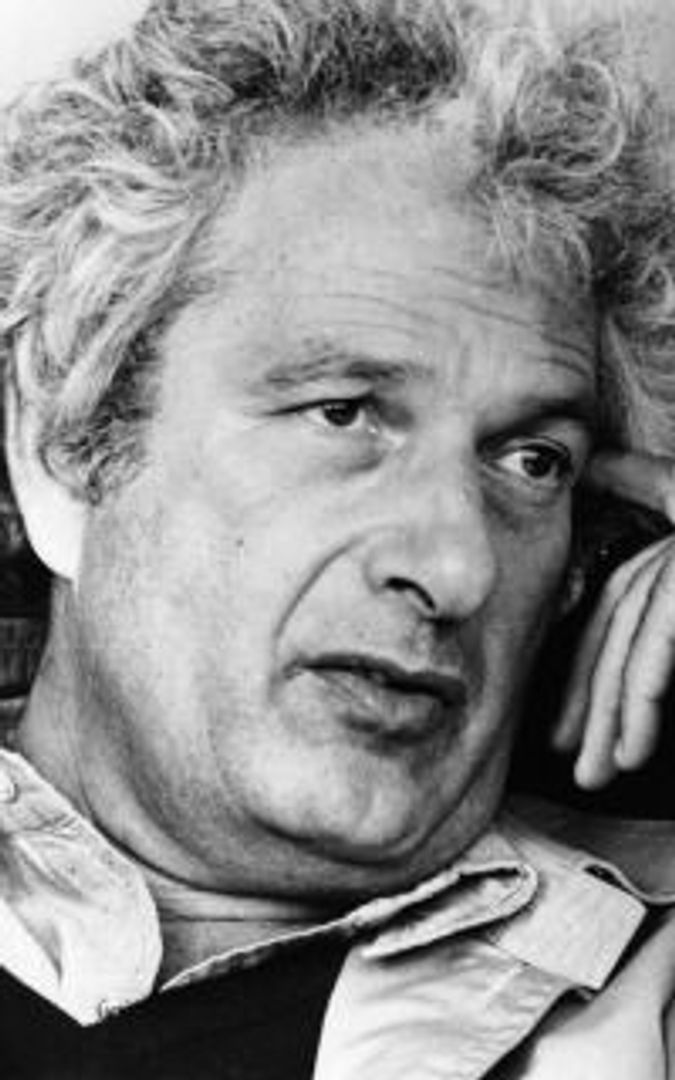 In Disguise: Joseph Heller disguised it, but there can be no doubt about the novel?s Jewish roots. Image by Getty Images

The book’s hero, or, more precisely, anti-hero, the Air Force bombardier Yossarian, is introduced as “Assyrian” (surely the only “American-Assyrian” character in modern fiction), a paper-thin disguise. Yossarian’s pilpul, delivered from an American Air Force base in World War II Italy, and his attacks on the idols of the marketplace wherever and however they stand are no less exemplary of the combination of Jewish passion and irony than that of Sholom Aleichem; his puncturing of everyday cant extends as far as Kant and is as familiar as the neighborhood schlemiel. As Kafka could not stop laughing when he read the opening pages of “The Trial” to his Prague friends, Heller laughs his way through the anxieties and frustrations of the ‘catch’ in “Catch-22.”

A key to Heller’s serious comedy is the artfulness of deflation: bringing high-flown principles down to earth. Earthily. Why, after all, bother with abstractions when we can meet an Air Force major with the family name of Major (and first name, thanks to his witty father, of Major: ergo “Major Major Major”) who announces a dramatic change in his airbase office hours? “‘From now on,’” Major Major orders, “‘I don’t want anyone to come in to see me while I’m here. Is that clear?’ ‘Yes, sir,’ said Sgt. Towser, ‘Does that include me?’ ‘Yes.’”

These engaging riffs open the way to deeper thought in the havoc of “Catch-22,” beginning with the “catch” itself: “You can’t do it if you can, and you can do it if you can’t.” So, in the first appearance of the “catch,” the medical officer who has the authority to ground flyers for illness hears Yossarian plead for a pilot in the squadron in the hope that the exemption will then apply to himself: 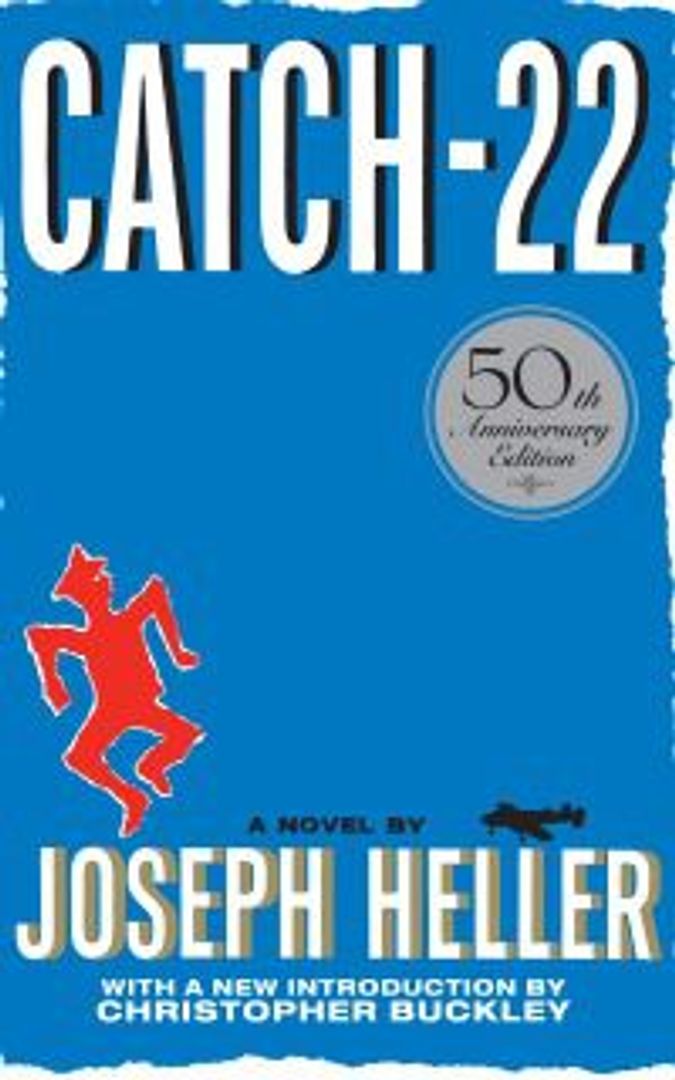 50 Years Later: A new edition marks the anniversary of the landmark novel. Image by Getty Images

The mass deconstruction here quickly extends to more rarified principles, including Kant’s Categorical Imperative. So we come to an exchange between Yossarian and Major Major when Yossarian simply refuses to fly any more missions because, as he reasonably puts it, he’s scared to death of dying:

“Would you like to see our country lose?” Major Major asked.
“We won’t lose.…There are 10 million men in uniform who could replace me…. Let someone else get killed.”
“But suppose everybody on our side felt that way.”
“Then I’d certainly be a damned fool to feel any other way. Wouldn’t I?”

It is Kant’s universalizability principle that is at stake here (“Act in such a way that the maxim of your action could apply universally”) — but turned on its head. Major Major asks what would happen in the war if all soldiers refused to fight? And Yossarian’s response is a version of the principle itself: Well, then, of course I, too, should refuse. Not in order to escape moral contradiction, as Kant had it, but because there is no reason that he should stand (or fall) alone.

And still again, Heller summons the “problem of evil,” that persistent thorn in religion’s side. If God is both beneficent and omnipotent, how is evil possible? The orthodox response is to reject the question: What appears evil is not really that, since whatever happens is justified in the long run. In Leibniz’s gleaming formula, ours is the “best of all possible worlds.” Always there are good (God’s) reasons for what occurs, even when our limited understanding fails to grasp them.

But Yossarian the myth-buster tackles this apologia head-on:

“Don’t tell me God works in mysterious ways,” Yossarian continued…. “There’s nothing so mysterious about it. He’s not working at all. He’s playing. Or else he’s forgotten all about us…. How much reverence can you have for a Supreme Being who finds it necessary to include such phenomena as phlegm and tooth decay in His divine system of creation?…. Why in the world did he ever create pain?”
“Pain?” Lt. Scheisskopf’s wife pounced upon the word victoriously [Yossarian has been having an affair with her; her husband is the primary “shithead,” but she also bears the name]. “Pain is a useful symptom. Pain is the warning to us of bodily dangers.”
“And who created the dangers?” Yossarian demanded. He laughed caustically…. “Why couldn’t he have used a doorbell instead to notify us, or one of His celestial choirs? Or a system of blue-and-red neon tubes right in the middle of each person’s forehead….”
“People would certainly look silly walking around with red neon tubes in the middle of their foreheads.”
“They certainly look beautiful now, writhing in agony or stupefied with morphine, don’t they?”

QED — although for Heller himself, this is only another stop on a long tour of philosophical iconoclasm. A related cliché about the world’s order is the doctrine of “just deserts”: Whoever suffers has earned it, as those who flourish are being justly rewarded. But Heller’s binocular vision sees the matter more as his predecessor Job did:

“I wonder what he did to deserve it,” the warrant officer with malaria and a mosquito bite on his ass lamented after Nurse Cramer… discovered that the soldier in white was dead.
“He went to war,” the fighter pilot with the gold mustache surmised.
“We all went to war,” Dunbar countered.
“That’s what I mean,” the warrant officer with malaria continued. “Why him? There just doesn’t seem to be any logic to this system of rewards and punishment. Look what happened to me. If I had gotten syphilis or a dose of clap for my five minutes of passion on the beach instead of this damned mosquito bite, I could see some justice. But malaria? Malaria? Who can explain malaria as a consequence of fornication?”
“What about me?” Yossarian said. “I stepped out of my tent in Marrakech one night to get a bar of candy and caught your dose of clap when that WAC I never even saw before hissed me into the bushes.….
“That sounds like my dose of clap, all right,” the warrant officer agreed. “But I’ve still got someone else’s malaria. Just for once I’d like to see all these things sort of straightened out, with each person getting exactly what he deserves.”

The case then rests — but Heller does not. What he puts on brilliant display is the way ethical and religious principles have been first emptied of meaning and then anointed as received wisdom. Of course, there is something to be said for the universality of moral principles and the lawfulness of nature. But what can be said for those ideals has, by repetition and the weariness of usage, won a place beyond question or thought. It takes a mind with Heller’s ironic turn to show that the emperor on parade has no clothes — like Yossarian refusing to wear his uniform or, indeed, anything else, to receive his Distinguished Flying Medal, and like the unbridgeable “catch” of “Catch-22.”

What is Jewish in this? Well, the one question calls for another: “What’s not?”

Berel Lang is professor emeritus of philosophy and humanistic studies at University at Albany-SUNY and author, inter alia, of “Mind’s Bodies: Thought in the Act” (SUNY Press, 1995).

‘Catch-22’ Still Saner Than Ever