Legend of Moses’ Death Sets the Example for an Easy Exit 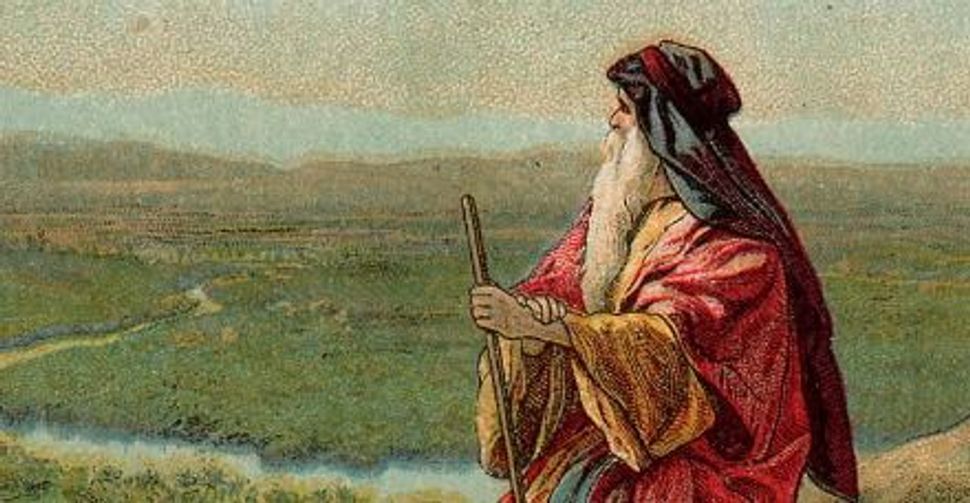 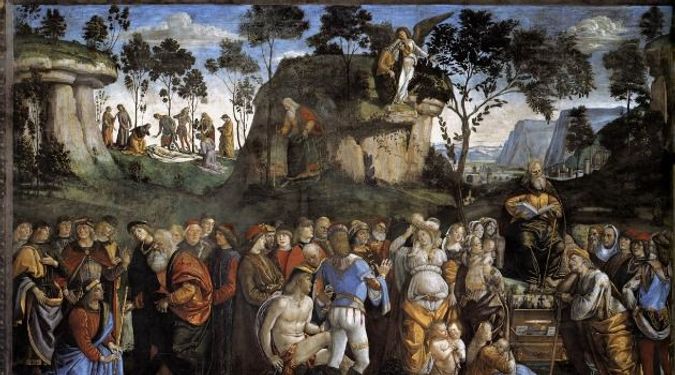 Killing Me Softly: When it was time for Moses to die, God took his soul with a kiss. Image by Getty Images

“Today, a family member called my father and told him that his 94-year-old brother died this morning. My uncle had been up and about, performing his usual routine, and then suddenly died.

“The family member told my father that the manner in which my uncle had passed away was a chutz, or a similarly sounding word. Are you familiar with such an expression? Could it have something to do with dying quickly at home and with family?”

The Yiddish word khuts does not in itself refer to a manner of dying. It means “exception” or “exceptional case,” which Mr. Karash’s uncle’s death indeed was. As sometimes happens with Yiddish words derived from Hebrew, in which ?utz means “outside” (its original biblical meaning was “courtyard” — that is, the out-of-doors space enclosed by a house), and the prepositional phrase ?utz mi– means “outside of” or “apart from,” Yiddish has given the Hebrew word a significance that it never had in its original setting.

On the other hand, if you’re looking for a marvelous Jewish expression that does refer specifically to an easy death in old age, it’s in Hebrew, not in Yiddish, that you’ll find it. This is mitat neshika, “death by a kiss,” and it comes from an old rabbinic legend about Moses that is a gem. In it, the 120-year-old Moses, told by God that the time has come for him to die across the Jordan as forewarned without entering the Promised Land, begs for a reprieve. So mighty are his prayers that God orders the gates of heaven shut against them; so desperate is he to remain alive that he pleads to be allowed to do so as a beast or even a bird; so unwilling is he to take no for an answer that he enlists the earth, the mountains, the sea, even the sun and stars to intercede for him — all to no avail. God is adamant. He has given His word that Moses must die, and He intends to keep it.

Finally, Moses gives in and accepts his fate. Now, however, God finds that He has a problem, because none of the angels summoned to take Moses’ soul is willing to do it. Even Samael, the angel of death, is so frightened by Moses’ awesome presence that he at first trembles with fright; then, plucking up his courage, he draws his sword and advances, only to have Moses strike it from his hands and blind him with a radiant look. “I beg you,” Moses says, turning to God, “do not hand me over to the angel of death!”

God answers, “Fear not, Moses, I will do it myself.” And in William Braude’s translation from Chaim Nachman Bialik and Yehoshua Ravnitzky’s classic “Sefer ha-Aggadah” or “Book of Legends” we read:

“Then, from the highest heaven of heavens, the Holy One came down to take the soul of Moses, and with Him the three ministering angels, Michael, Gabriel, and Zagzagel. Michael laid out his bier, Gabriel spread a fine linen cloth at his head, while Zagzagel spread it at his feet. Michael stood at one side and Gabriel at the other. Then the Holy One said to Moses, ‘Moses, close your eyes,’ and he closed his eyes. ‘Put your arms over your breast,’ and he put his arms over his breast. ‘Bring your legs together,’ and he brought his legs together. Then the Holy One summoned Moses’ soul, saying, ‘I had fixed the time of your sojourn in the body of Moses at 120 years. Now your time has come to depart. Delay not!’

“She replied, ‘Master of the Universe, I know that You are God of all spirits and Lord of all souls. You created me and placed me in the body of Moses 120 years ago. Is there a body in the world more pure than the body of Moses? I love him, and I do not wish to depart from him.’

“The Holy One exclaimed, ‘Depart, and I will take you up to the highest heaven of heavens, and will set you under the throne of glory, next to the cherubim and seraphim.’

“In that instant, the Holy One kissed Moses and took his soul with that kiss.”

To this day, if you wish to say in ordinary Hebrew that someone has died at a ripe old age without prior disease or suffering, you say that he or she had a mitat neshika. According to rabbinic tradition, one has to be at least 80 to qualify. Yet not all the rabbis thought that it required being as saintly as Moses. The great talmudic sage Rava, hearing of such a death, is reported to have said, “A man’s lifespan, children, and livelihood depend not on merit but on the stars.” Mr. Karash’s uncle’s star was a lucky one.

Legend of Moses’ Death Sets the Example for an Easy Exit